Recently, a simple method for the extraction of lipids from wet cyanobacterial microalgae using liquefied dimethyl ether (DME) without drying, cell disruption, or heating was proposed. Herein, the versatility of this method was evaluated using Haematococcus pluvialis at 0.59 MPa and 25°C. Direct extraction of lipids from H. pluvialis of moisture-rich microalgae was successfully achieved, in a lipid extraction yield of 30.0% of the dry weight of the microalgae. The astaxanthin concentration in the extracted lipid was 0.33%, which was lower than the 1.82% achieved by the commonly-used acetone extraction, which incorporates drying and cell disruption. The carbon and hydrogen content were improved after DME extraction. In addition, 92% of water in the wet H. pluvialis was removed. Compared with other extractions, liquefied DME combines drying, cell description, and solvent extraction into one step.

The energy crisis, in addition to the lack of fossil fuels and global warming, represents one of the most important challenges faced by human society. Microalgal biomass-based biofuels are considered one of the most promising substitutes for fossil fuels, since microalgae have high growth rates and high lipid contents and require smaller cultivation areas, which do not compete with food or feed stocks [1]. However, the net energy obtained from the production of microalgal biofuel could be negative [2,3] because of the energy required for removing water by drying, dewatering, and flocculation processes prior to oil extraction [4-6]. In addition, microalgal lipids are typically encapsulated within cellular structures. Cell disruption is imperative in lipid extraction as it liberates microalgal lipids from the cellular matrix into the surrounding media [7]. Recently, the successful use of liquefied dimethyl ether (DME) for the extraction of organic components of wet cyanobacterial microalgae was reported [8-9]. DME has been developed as a synthetic fuel for use in both liquid and gaseous forms. In China, DME is synthesized using small-scale coalfields of low commercial value and is produced as a fuel at a cost equivalent to that of imported liquefied petroleum gas. Because most previous studies regarding DME focused on its synthesis and combustion [10-12], only our group and a group in New Zealand have examined DME as an extraction solvent [8,9,13,14]. In the previous study, liquefied DME can extract lipids from cyanobacterial microalgae without drying because DME has a high affinity towards oily chemicals and is partially miscible with water [15]. Moreover, the use of liquefied DME does not require cell disruption in cyanobacterial microalgae. In addition, DME can be easily separated from the lipids and other residues and re-used because of its low boiling point (-24.8°C) [16]. Therefore, DME lipid extraction consumes less energy and emits less greenhouse gases than extractions with other solvents [17]. Furthermore, liquefied DME has such a low toxicity that it has been examined as a prospective solvent for use in food processing [18]. Additionally, it is resistant towards autoxidation, unlike other alkyl ethers [19]. In the previous study, In addition to the aforementioned advantages of DME, lipids were successfully extracted from seven wet cyanobacteria microalgae by DME without the need for cell drying, cell disruption, or the use of a high-power heat source for solvent evaporation. The extraction yields were over 97% compared to those obtained using the Bligh Dyer method, with only minor differences in the elemental analysis [9]. However, the validity of DME extraction was confirmed only for the cyanobacteria. In addition to cyanobacteria, there exist other microalgae, such as green algae and diatoms. While green algae and diatoms are eukaryotes, cyanobacteria are prokaryotes. The cell wall of cyanobacteria is mainly composed of peptidoglycan, whereas the main component is cellulose in some green algae and silica in diatoms. Because of such differences in the components of the cell walls of microalgae, the findings related to previous study from cyanobacteria obtained to the present may not be applicable to green algae or diatoms.

Green algae Haematococcus pluvialis is an interesting strain for lipid extraction since it has been reported to contain about 17-46% of lipids (dry weight) [20]. Moreover, the co-production of valuable products such as astaxanthin is necessary for economic bio fuel processes. It is widely considered to accumulate the highest amount of astaxanthin compared with other sources such as salmon, red fish, shrimp, krill, and lobster at 1.5-3% by weight [21-23]. The astaxanthin concentration in cells is 500 pg/cell [21]. Astaxanthin is one the most valuable caroteniods since it has many biological activities and beneficial health effects, including the protection of skin from radiation injuries caused by sunlight, blocking reactions induced by other chemicals or toxins, deceleration of agerelated macular degeneration [24], favorable effects on blood pressure [25,26], in addition to cardio-protective effects [27]. It also shows higher antioxidant activities than other carotenoids such as β-carotene, lutein, canthaxanthin, zeaxanthin, and vitamin E [28-30]. Therefore, it has been widely used for pharmaceutical and other applications such as in cosmetics and food additives. However, astaxanthin is accumulated in the thick-walled cells of H. pluvialis. The thick-walled cell hinders the extraction of lipids and astaxanthin [31]. Therefore, cell disruption can effectively increase the extraction amount of lipids and astaxanthin from H. pluvialis [32]. Therefore, various extraction methods of lipids and astaxanthin from H. pluvialis including organic acetone extraction and supercritical carbon dioxide (SC-CO2) extraction have been studied [33-35]. Nevertheless, certain limitations including the toxicity of the organic solvents, high-pressure operations, and required drying process prior to SC-CO2 extraction are concerns. Therefore, this work aims to study the extraction of lipids and astaxanthin from wet H. pluvialis using liquefied DME at room temperature and a mild pressure. In addition, the extracted organic components including certain elements and fatty acids were characterized.

The DME extraction apparatus and procedure are described in detail in a previous study [8]. Briefly, a liquefied DME storage tank (TVS-1-100, Taiatsu Techno Corp., Saitama, Japan), an extractor (HPG- 10-5; Taiatsu Techno Corp., Saitama, Japan; 190 mm×11.6 mm internal diameter, volume 10 cm3), liquefied DME, and extract storage vessels (HPG-96-3; Taiatsu Techno Corp.) made of pressure-resistant glass coated with polycarbonate were connected in series. The water content of the wet and unbroken cyst H. pluvialis paste provided by Biogenic Co., Ltd, Tokyo, Japan was 82.1%, as determined by drying at 107°C to a constant weight. An average of 1.187 g of wet H. pluvialis was loaded into the lower part of the extraction column, and the upper part of the column was loaded with glass wool and glass beads ranging in diameter from 1.5 mm to 2.5 mm. Liquefied DME was allowed to flow into the extraction column at a flow rate of 10 ± 2 cm3 min–1. The temperature of liquefied DME in the extractor was 20 ± 2°C, as determined by an infrared thermometer. The operation pressure was 0.51 ± 0.03 MPa, the saturated vapor pressure of liquefied DME [14]. After passing liquefied DME through the extractor for different time intervals, DME was evaporated by opening the reducing valve of the storage vessel. The weights of the samples were measured before and after they were placed in the oven at 40°C, to determine the amount of extracted organic components and water. In the case of the astaxanthin extraction, the extracts were diluted with ethanol without drying and then the amount of extracted astaxanthin was analyzed by high performance liquid chromatography (HPLC) as described herein below.

Acetone is toxic and is typically used for the astaxanthin extraction from H. pluvialis [36]. The results by liquefied DME were compared with those of the conventional acetone extraction. Acetone (1 mL), 1 g of glass beads (1 mm diameter), and 16.4 mg of dry H. pluvialis were put into a disruption tube and the solution was homogenized by a Disruptor genie digital (Scientific Industries, Inc., New York, USA) at 8000 rpm at room temperature for 10 min to disrupt the cell wall. The solution was then transferred to a centrifuge tube and was centrifuged at 3000 rpm at room temperature for 5 min. The cell residue was then separated from the supernatant, homogenized, then centrifuged by the aforementioned method two additional times. Each supernatant was combined, filtrated, and evaporated to remove acetone.

For elemental analysis, the original H. pluvialis microalgae, lipids, and residues were pretreated by continual drying at 107°C until constant weights were obtained. The carbon, hydrogen, and nitrogen content were determined by a CHN corder (MT-6 Elemental analyzer, Yanaco New Science Inc., Kyoto, Japan) based on flash combustion, which converts all organic substances into combustion gases. The oxygen content was calculated using the difference.

To analyze the fatty acid content, the extracted lipids were esterified at 80°C for 3 h with a 10% HCl-methanol solution in a dry thermo unit (DTU-2 C, TAITEC Co., Ltd, Koshigaya, Japan). The analysis of fatty acid methyl esters (FAMEs) was performed with a gas chromatograph (GC-2014, Shimadzu, Kyoto, Japan). An injection port and a flameionization detector were maintained at 250°C. The column temperature was initially held at 150°C and programmed to increase to 220°C at 2°C/min. Helium and hydrogen were used as the carrier gases.

For the determination of astaxanthin, the extract was analyzed using HPLC (Jasco, Hachioji, Japan). The astaxanthin standard and the sample extract were diluted with mixture of acetone before being injected with a 20 μL loop. The separation column was a 5 C18-MS-PAQ COSMOSIL 250 × 4.6 mm (i.d.) (Nacalai Tesque Inc, Kyoto, Japan) equipped with an intelligent UV/VIS detector UV-2075 plus (Jasco, Hachioji, Japan). The isocractic elution was provided at 1.5 mL min–1 with a mobile phase consisting of methanol and THF at the volume ratio of 9: 1. Astaxanthin was detected at 470 nm. The amount of astaxanthin in the extract was analyzed on the basis of the peak area compared to that of standard astaxanthin. 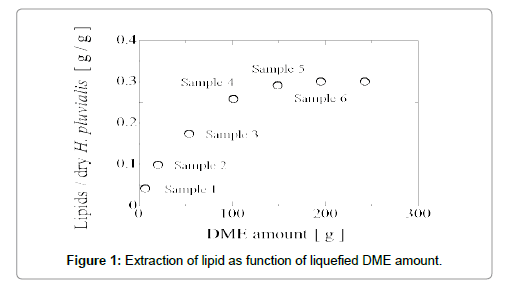 Figure 1: Extraction of lipid as function of liquefied DME amount.

Six samples were collected with different amounts of liquefied DME (Figure 1) and their elemental and fatty acid compositions were analyzed. The results of the elemental analysis are shown in Table 1. The distribution of elements in the compounds extracted from H. pluvialis via the two extraction methods was as follows: 71.7% carbon (C), 10.8% hydrogen (H), 0.3% nitrogen (N), and 17.2% oxygen (O). The differences between the distribution of compounds from either DME or acetone extraction were similar to the measurement errors, indicating that both extraction methods led to similar results. However, extracted lipids contained more carbon and hydrogen compared with original H. pluvialis and its residues. Therefore, extracted lipids are more suitable for use as biofuel than original H. pluvialis as biomass.

For fatty acid analysis, the samples were separately analyzed and the results are shown in Table 2. The other components were detected as numerous peaks after the C18 fatty acids in the HPLC analysis. Because each peak after the C18 fatty acids was very small, correlated materials could not be identified. However, summation of the small peak areas was not negligible. Lipid sample number 1shown in Figure 1 mainly contained the saturated fatty acid C16:0 (palmitic acid). A significant amount of C18:2n-6, C18:3n-6, and C18: 3n-3 (linoleic acid, γ-linolenic acid, and α-linolenic acid) were obtained from sample 2 and 3. Moreover, the total amount of free fatty acids extracted by DME (calculated by the summation of sample number 1 to 6) contained less unsaturated fatty acids compared to the acetone extraction. Saturated fatty acids often have non-advantageous cold flow properties (a high cloud point and a high pour point), while biodiesel made from unsaturated fatty acids (C18: 1, C18: 2, C18: 3) tends to be volatile and is susceptible to low oxidation stability [7]. The organic components obtained from H. pluvialis should therefore be modified prior to use as biofuel. In addition, 92% of the initial water content was removed from the wet H. pluvialis, and the residue was almost entirely dried. Therefore, because the residue of H. pluvialis contained low water content, its viability for use as a biomass fuel without drying was evident. 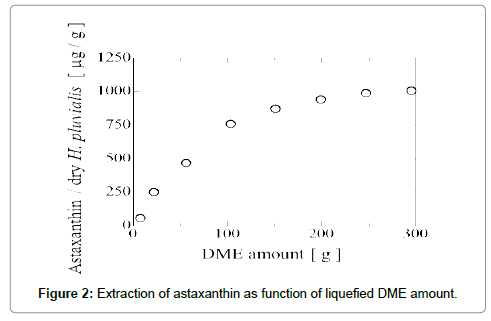 Figure 2: Extraction of astaxanthin as function of liquefied DME amount.

Copyright: © 2014 Boonnoun P, et al. This is an open-access article distributed under the terms of the Creative Commons Attribution License, which permits unrestricted use, distribution, and reproduction in any medium, provided the original author and source are credited.