UHPLC-HRMS Analysis of Theobromine in Theobroma cacao and its Products

UHPLC-HRMS Analysis of Theobromine in Theobroma cacao and its Products

Theobroma cacao seed is the major ingredient in all types of chocolate products and contains Theobromine. Theobromine is a bitter alkaloid beneficial in the treatment of hypertension, arteriosclerosis and angina pectoris. Of all chocolate brand samples, Sample J containing 70% Cacao had the highest amount of theobromine. Sample A containing 11% Cacao had the least amount of theobromine. The 100% Cacao Chocolate Bar had the highest concentration of theobromine in comparison to roasted cocoa having the lowest concentration of theobromine. Quantitative analysis of Theobromine was completed on the Thermo Scientific UHPLC and LTQ Orbit rap Discovery equipped with an ESI ion source. A three-minute gradient method with a flow rate of 300 μL/min was developed on the UHPLC-HRMS using HPLC-grade water and acetonitrile. Ethyl ether was used to remove cacao fats and water was used to isolate theobromine. To obtain the precision of the theobromine extraction process, the recovery analysis was 86%.

Theobroma cacao, the source of chocolate, has been economically important plant in the cacao producing countries in central and South America for centuries. Cacao has been used in trading, ceremonial purposes and chocolate production [1]. Although chocolate contains fats, carbohydrates, and proteins, the Theobroma cacao (cocoa beans) beans are the main component chocolate bar production [1].

Certain chocolate manufacturers have specific methods of drying and roasting cocoa beans. Theobroma cacao beans of different processing methods can influence the final chocolate product flavor [2]. Companies are concerned whether their chocolate processing has been effective in preserving fine flavor and aroma [2]. Depending on the manufacturer’s cocoa processing, certain methylxanthines (such as theobromine) could be lost through production [3].

Theobromine is known to possess bitter flavor present in cocoa and chocolate products [5]. It is a metabolite of caffeine and is found in relatively high concentrations in chocolate products [6]. Several studies have shown that theobromine can increase HDL cholesterol, stimulation of heart muscle and relaxation of smooth muscle within lungs [2]. Psychological effects of theobromine had shown positive changes in behavior: increased motivation/alertness and higher energy [7]. In addition, methylxanthines such as theobromine is known to contribute to chocolate cravings and preference for dark chocolate tastes [8].

A novel aspect of the study was a rapid, sensitive UHPLC-HRMS gradient method for theobromine was developed for analysis of Theobroma cacao and its products. Within 3.30 minutes, different stages of cacao processing and chocolate samples were successfully analyzed for theobromine.

Despite eradication of Frosty Pod Rot in Theobroma cacao, excess use of pesticides can pose as a toxic health risk. Currently, 58% of nations use pesticides in agriculture, where the most common is glyphosate [11]. After health risk analysis, the theoretical maximum dose intake was 30% higher than the accepted daily intake [11]. Detection of pesticides via UHPLC-HRMS can help farmers control the amount of pesticides/ insecticides added to preservation of cacao crops. This can alleviate any possible long term health complications due to pesticide use.

The second objective was to perform quantitative analysis of theobromine in 10 different popular chocolate brands within U.S. As Americans were becoming increasingly aware of health-related effects based on diet, chocolate manufacturers could alter their products to be appropriate for natural health product ingredients or supplements.

Theobroma cacao beans from four different stages of cacao processing (raw, dried, roasted, and 100% cacao bar) were sampled from Costa Rica and analyzed in triplicates. Each commercial chocolate sample was purchased in the U.S. based on consumption popularity.

Cacao samples that were provided and several brands of chocolate samples were extracted via HPLC grade water and ethyl ether. The extraction process was taken from Caudle G, Gu Yifang, Bell N Leonard [12].

The Thermo Fisher UHPLC system included the Accela Auto sampler system and Accela 1250 pump (San Jose, California, U.S.). The detector used was the LTQ Orbitrap Discovery, a high-resolution mass spectrometer (Bremen, Germany). Infusion and tuning parameters were completed for the mass spectrometer for each analyte of interest. The mass to charge ratio for theobromine was 181.0720 m/z. The mass range used was between 100-1000 m/z in a positive ionization mode. The capillary voltage was 5.50 and the tube lens was at 48.00 V. The sheath gas flow was 45.00 arb and the auxiliary gas flow was 13.00 arb. The heated capillary temperature was 350.00°C. 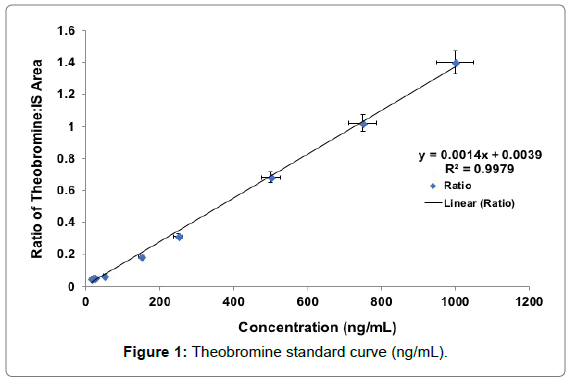 A recovery analysis was completed for theobromine. 86% of theobromine was recovered via extraction technique used in this experiment. 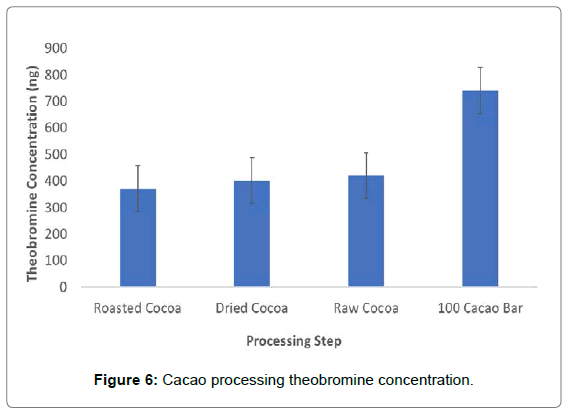 Dried cacao had shown the second least amount of theobromine. The process of alkalization requires the use of raw cacao beans to be dried for roasting. However, alkalization influences loss of methyl xanthine compounds [13]. Raw cacao had shown the second most amount of theobromine, as it is the initial stage of cacao processing and taken directly from cacao pod [14]. 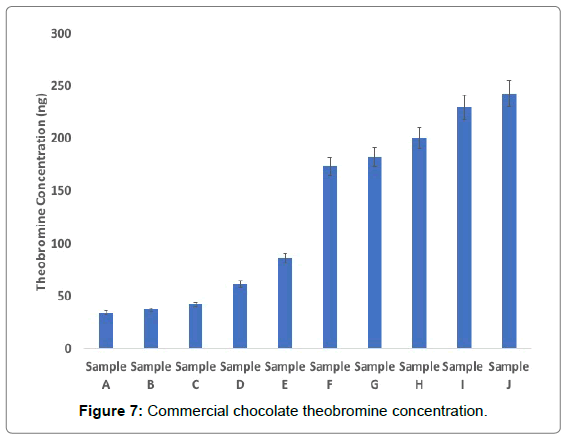 Copyright: © 2018 Mladenovic K, et al. This is an open-access article distributed under the terms of the Creative Commons Attribution License, which permits unrestricted use, distribution, and reproduction in any medium, provided the original author and source are credited.