Nearly one million tons of citrus fruits are cultivated in Japan every year; these are used as the raw material for juice processing [1]. However, most of the pomace obtained after juice processing is disposed of, although it contains valuable substances such as flavonoids and essential oils [2]. Waste containing high moisture content is not only difficult to transport during disposal but also creates problems with regard to hygiene because it decomposes easily. Moreover, during the combustion process, the temperature of the combustion gases significantly drops inside the combustion furnace owing to the high moisture content of the diapers, and waste gases containing dioxins pollute the environment [3]. The disposal cost of the pomace is expensive because it contains a large amount of water [4]. Essential oils and citrus flavonoids are mainly contained in the pomace obtained from the peel and leaves of citrus [5]. These valuable substances are traded at a high price in the market. Essential oils are used in aromatherapy and high-quality perfumes. Citrus flavonoids are used as raw materials for health supplements; these flavonoids are also known to have hypolipidemic effects and apoptosis-inducing behavior in cancer cells [6]. Commercially, essential oils are obtained from the citrus peels by the cold press and steam distillation (SD) method [7,8]. However, the extraction yield by the cold press method is low, because large amounts of valuable oils remain in the residue [9]. On the other hand, pure essential oils can be obtained using the SD method. The distillation step is carried out over a temperature range of 130 to 150°C. The essential oils evaporate with the steam during the distillation process. However, the disadvantage of the SD method is that the quality of the obtained essential oils degrades as a result of the distillation heat [10]. Citrus flavonoids cannot be extracted using the SD method because it involves high boiling temperatures [11]. Additionally, a large amount of the residue with high water content is disposed of after the aforementioned processing methods. Therefore, the flavonoids are extracted using organic solvents such as menthol, dimethyl sulfoxide (DMSO), and hexane [12]. However, such extractions are toxic, expensive, and hazardous. Moreover, these methods require several preprocessing steps such as drying, grinding, and homogenizing the raw material [13]. Recently, alternative extraction methods are in demand in the food industry. Supercritical CO2 (SC-CO2) and liquefied dimethyl ether (DME) are receiving increased attention as the extraction solvent because of their desirable properties. SC-CO2 extraction has showed high selectivity and the possibility to fractionate the components based on temperature and pressure control [14]. However, it is necessary to use a special apparatus to withstand the high pressure of SC-CO2 [15]. DME has been developed as a synthetic fuel for use in both liquid and gaseous forms [16-18]. In China, DME is synthesized using small-scale coalfields of low commercial value and produced as a fuel at a cost equivalent to that of the imported liquefied petroleum gas. The standard boiling point of DME is -24.8°C and its saturated vapor pressure at 20°C is 0.51 MPa [19]. Because DME has weak hydrogen bonds, water dissolves into the liquefied DME to the extent of 7–8 wt% at room temperature. The quantity of gaseous DME dissolving in water is also low, and it can be easily separated from the water without distillation [20]. Furthermore, liquefied DME has low toxicity, and thus, could be investigated as a prospective solvent for food processing [21,22]. DME differs from typical ethers such as ethyl ether and does not form peroxides [23]. In addition, liquefied DME can extract not only water (dewatering) from brown coal [24], but also bio-crude (the organic components contained in the vegetal biomass) from biological materials such as microalgae [25]. The DME method exhibited robust dewatering ability and efficiency in removing the oils from the highmoisture orange peels [26]. Moreover, it can be operated at a relatively lower temperature and pressure, and easily separated from the extract at the ambient pressure [27]. In this work, water, essential oils, and flavonoids were extracted from the citrus pomace using liquefied DME. The peel and leaves of Citrus junos (Yuzu) and the peel of Citrus tangerine (Ponkan) were used as raw materials, and the dewatering rate and yield of essential oils and citrus flavonoids were investigated.

Figure 1 shows a schematic of the laboratory-scale DME extraction apparatus. Two storage tanks, one containing liquefied DME (tank A, volume: 100 cm3; TVS-1-100, Taiatsu Techno Corp., Saitama, Japan) and an extraction column and the other holding the mixture of liquefied DME, water, and essential oils (tank B, HPG-96-3, Taiatsu Techno Corp., Saitama, Japan), were connected in series. The extraction column (diameter: 11.6 mm, length: 190 mm; HPG-10-5, Taiatsu Techno Corp., Saitama, Japan) was employed for the experiment. Additionally, bigger column (diameter: 35 mm, length: 190 mm; HPG- 96-3, Taiatsu Techno Corp., Saitama, Japan) was used as extractor because a large amount of essential oils were needed for the analysis. Citrus fruit peels comprise flavedo (exocarp) and albedo (endocarp). The essential oils are present in the oil glands of the flavedo. In these experiments, the peels of citrus fruits containing the albedo were used as the raw material. The essential oils in citrus peel were present in trace amounts (1–3%), the amount being smaller than the amount of water extracted from the citrus peel. The extraction of water and essential oils were performed three times, respectively. The test samples were loaded into the extraction column, and glass beads (diameter between 1.5 and 2.5 mm; BZ-2, ASONE Co., Inc., Osaka, Japan) were loaded at the top and bottom ends of the column [28]. In addition, for the removal of water, the loaded average amounts of Yuzu peel, Ponkan peel, and Yuzu leaves were 4.4 ± 0.1 g (82.7 wt%), 5.0 ± 0.1 g (72.4 wt%), and 2.6 ± 0.2 g (82.6 wt%), respectively. On the other hand, for the extraction of essential oils, the loaded average amounts of Yuzu and Ponkan peels were 20.1 ± 0.2 g (85.6 wt%) and 18.3 ± 0.3 g (72.4 wt%), respectively. Furthermore, the thickness of the Yuzu and Ponkan peels were approximately 5 mm and 2 mm, respectively. The values in the parentheses indicate the initial water contents, which were determined by drying at 107°C. The liquefied DME in tank A was controlled at 35 ± 2°C in a water bath, while the saturated vapor pressure of DME in tank A was 0.78 ± 0.03 MPa. The liquefied DME was supplied to the extraction column, and cooled down to room temperature using the long tube, which connected tank A and the extraction column. The temperature of the DME in the tube and extraction column was 15 ± 1°C, which was detected using an infrared thermometer. DME flowed owing to the pressure difference between tank A and the extraction column while the DME flow rate was maintained at 10 cm3 min–1 using a pressurereducing valve in the outlet of the extraction column. After the liquefied DME was passed through the extraction column at different time intervals, DME was evaporated by opening the pressure-reducing valve of tank B. The amount of the extracts remaining in tank B was equal to the total amount of essential oils and water extracted from the test samples. The extract was weighed after collection, and the yield of (1) essential oil and (2) water were determined using the equation shown below. In addition, the amount of citrus flavonoids in the water phase was analyzed using high-performance liquid chromatography (HPLC). The dry weights of the samples in the equation 1 were determined by drying at 107°C up to constant weight [26]. In other words, the dry weight was determined by subtracting both essential oil and water from the wet weight of the samples. Initial water amounts in the equation 2 were determined by difference between weight reduction by the drying and extracted essential oil amount. 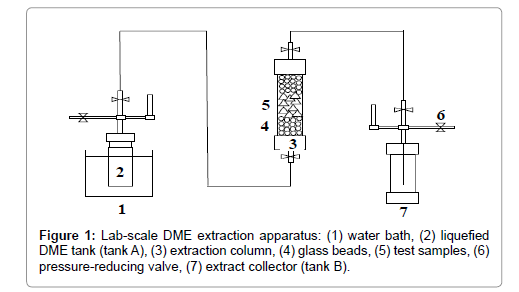 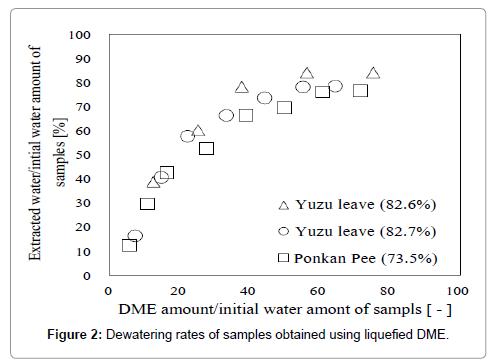 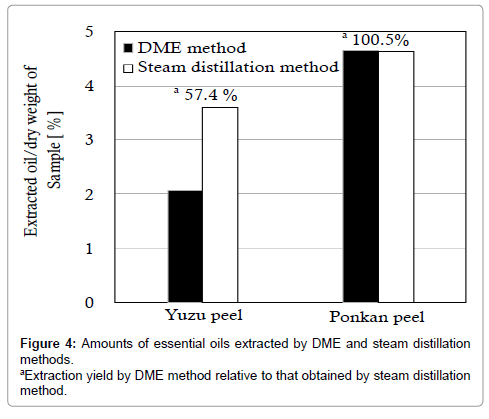 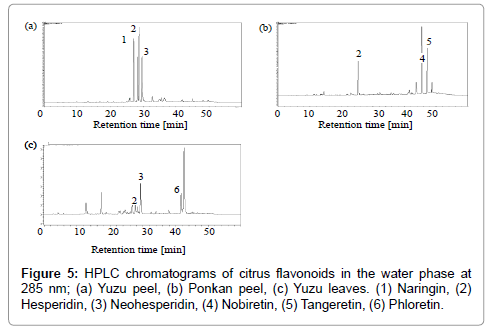 Copyright: © 2014 Hoshino R, et al. This is an open-access article distributed under the terms of the Creative Commons Attribution License, which permits unrestricted use, distribution, and reproduction in any medium, provided the original author and source are credited.