The Bay of Bengal is situated at the southern part of Bangladesh with 710 km costal area which supplies about 511 marine species including shrimps, crabs, sea food and different other marine species [1]. Both the fresh water fish and marine fish are naturally available in the country, and cheap and easily affordable. As a result, people of all classes consume fish as sources of protein, carbohydrate, fat, minerals, vitamins, micronutrients and a variety of essential saturated and unsaturated fatty acids which are beneficially for human health [2,3]. In general, fish is an inseparable part of our total economy and contributes in employment, exporting and nutrition including 63% of animal protein intake for human being [4]. Again both the consumption and production of fish has been increased in the recent years and hence it is required to enhance the output and quality of the fish [5]. In human health, fish lipid and several fatty acids have an important induction in membrane biochemistry, and membrane-mediated action such as osmoregulation, nutrients assimilation and transport [6]. Depending on the nature and habit of the fish species and both the biotic and abiotic factors, fatty acid compositions is highly variable quantitatively in fish lipids [7]. Beneficiary polyunsaturated fatty acids (PUFAs) such as Eicosapentaenoic acid (EPA; C20:5) (ω-3 fatty acid) and Docosahexaenoic acid (DHA; C22:6) (ω-3 fatty acid) to human health are mainly found in fish lipids [8]. Both these acids are helpful in prohibition and treatment of many diseases such as coronary heart disease, rheumatoid arthritis, asthma, cancers, diabetes and others in human body [9]. Very little analysis was done about the fatty acids composition in marine water fish of Bangladesh. As fish is an important source of beneficiary fatty acids (PUFAs), the objective of our work is to determine fatty acid compositions in marine fish samples for evaluation of nutritional values in these species.

Approximately, 50-100 mg of fish oil extracted from fish sample was taken in a pear shaped flask and 2.0 mL of 0.5M methanolic NaOH was added to it. The mixture was ultrasonicated for 1 minute and then refluxed at 40°C for 30 minutes. The mixture was evaporated with a rotavapour to dryness and was dissolved in water. The pH of the solution was adjusted to 4.5 (just acidic) with 2 M HCl in which the blue litmus paper was turned to red. The mixture was shaken vigorously and then extracted with n-hexane. The organic layer was collected in another pear shaped flask and was evaporated to dryness in a rotavapour.

1.0 mL of Boron trifluoride-methanol mixture was added in the pear shaped flask containing fatty acids and was ultra-sonicated for 1 min. The mixture was heated water bath at 60°C for 30 min. The acetylated mixture was evaporated to dryness. To more trace amount reagent it was completed dried by adding hexane for two more times. After that 1.0 mL of n-hexane was added to the flask, the mixture was ultrasonicated for 1 min. Then it was filtered through cotton filter by a Pasteur pipette and transferred into GC vial for analysis of by GC-FID.

A mixture of methyl esters of thirteen fatty acids standard was used as the reference. The identification of fatty acids were done by comparing retention times of the samples with that of the corresponding fatty acid standards in the chromatograms. Quantification was carried out by accounting the areas of individual fatty acids and the results were expressed in terms of the relative percentages composition (Table 1). The amount of individual fatty acids present in the fish extracts were calculated by using the following formula:

Thirteen fatty acids were estimated quantitatively through the analysis of lipid content in the marine fish samples and saturated fatty acids (SFAs), unsaturated fatty acids (USFAs), monounsaturated fatty acids (MUFAs) and polyunsaturated fatty acids (PUFAs) were separately determined (Tables 1 and 2). From the Figure 1 (Where Average values were used for the same species), it is seen that most of the analyzed fish samples contain comaratively higher ammount of unsaturated fatty acids (MUFAs and PUFAs) than saturated fatty acids. The SFAs content was highly variable and the maximum amount of total SFAs was found in Megalapsis cordya (surma) (74.50%) and the minimum amount was found in Parastromateus niger (kalochanda) (24.45%). Lauric Acid (1.33-11.34%), myristic acid (0.64-3.84%), palmitic acid (1.41-39.27%), stearic acid (0.47-18.89%) and arachidic acid (2.88-43.28%) were predominated saturated fatty acids in nearly all species. Other SFAs i.e., Behenic, capric and caprylic acids were found in trace level. Among the unsaturated fatty acids, palmitoleic acid (3.12- 18.28%), linoleic acid (1.30-38.13%), oleic acid (5.03-46.27%), elaidic acid (0.61-9.90%) and erucic acid (2.95-28.94%) were predominant. Among the MUFAs, elaidic acid was present predominately in Otolithoides pama (poa) (9.90%) which decrease the cholesterol level due to the increase activity of plasma cholesterylester transfer protein (CETP) [11], oleic acid in Parastromateus niger (kalochanda) (46.27%), eruic acid in Coilia ramcarati (ulua) (28.94%) and palmitoleic acid in Platycephalus indicus (undurabailla) (18.28%) fish. The consumption of MUFAs is involved with lowering low-density lipoprotein (LDL) and increasing of high-density lipoprotein (HDP) cholesterol [12]. The amount of MUFAs are higher amount followed by PUFAs and SFAs, where linoleic acid (ω-6), palmitoleic acid (ω-6), oleic acid (ω-9), elaidic acid (ω-9), erucic Acid (ω-9) were found among the MUFAs. The highest amount of PUFAs was found in Eleutheronema tetradactylum (lakkha) (38.13%) fish and lowest amount was found in Platycephalus indicus (undurabailla) and Paraplagusia bilineata (pata) fish in trace label. The ratio of PUFA/SFA which indicates the quality of lipid was found in lowest in Paraplagusia bilineata (pata) fish and highest in Eleutheronema tetradactylum (lakkha fish) (0.64). USFA/ SFA is also calculated which also indicates the quality of lipids (Table 2). In this analysis, the ratio of PUFA to SFA was found to be 0.64 for the Eleutheronema tetradactylum (lakkha fish). But for healthy diet this ratio was recommended as 0.40 or more accordingly the Department of health of the United Kingdom [13]. Thus, the values of this ratio in the present study are in the recommended range. 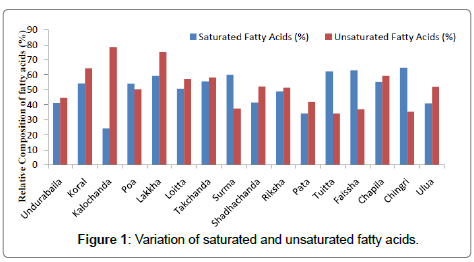 Food and Nutrition Board of the National Academy of Medicine recommended fatty acids intake in the Dietary Reference Intakes (DRIs) which vary with age and sex. Adequate intake of ω-3 fatty acid in adult (19-50 years) male is 1.6 g and female is 1.1 g per day. Several global and national organizations have also published guidelines for infants and children, ranging from 50-100 mg per day of combined EPA and DHA [14].

Fatty acid composition is an important factor for the consumption of fish and people awareness is increasing day by day in this regard. This research reveals the fatty acid compositions in several most consumable marine fish samples in Bangladesh which broaden the knowledge and awareness among the consumers. Since amount of unsaturated fatty acids is comparatively higher than saturated fatty acids in marine fish samples, fish consumption has beneficiary effect on human health of the consumers in Bangladesh.

Copyright: © 2018 Islam R, et al. This is an open-access article distributed under the terms of the Creative Commons Attribution License, which permits unrestricted use, distribution, and reproduction in any medium, provided the original author and source are credited.