This study was designed to isolate and characterize the Staphylococcus aureus from raw cow’s milk and some other dairy products sold in the local markets of Mymensingh district of Bangladesh by using conventional methods and molecular techniques. Raw cow’s milk, pasteurized milk, yogurt, roshmalai, cheese, lassi, matha, milk-shake, custard, faluda, pudding and borhani sampled from different retail shops and renowned restaurants of the local markets of Mymensingh. Out of 72 samples tested, all the samples revealed presence of Staphylococcus spp. and 57 isolates found coagulase positive S. aureus. The antimicrobial susceptibility pattern of the 57 pathogenic isolates was determined by using 10 commercially available antimicrobial drugs by disk diffusion assay. It exposed that majority of the isolates (79.16%) showed resistant to more than three antimicrobial agents. Among 57 isolates, 14 (24.56%) showed resistance against both methicillin and oxacillin, also intermediately resistant against vancomycin. Molecular detection of mecA and mecC gene in the 14 methicillin and oxacillin resistant isolates for the identification of methicillin resistant Staphylococcus aureus (MRSA) strains revealed 8 isolates (57%) from raw milk, yogurt, roshmalai, borhani and cheese to be positive for mecA gene while it was not detected in any other of the samples. None of the tested samples found mecC positive. Our findings revealed that the milk and dairy food products sold at local markets of Mymensingh are contaminated with multidrug resistant S. aureus elucidating a possible risk of MRSA infection which is alarming for both human and animal health.

Food is one of the most fundamental needs of human being. Among various food items milk and dairy products are frequently consumed by people as an ideal source of nutrients. Food is also a good territory for colonizing and proliferating many disease causing pathogenic microorganisms [1-6]. On the other hand microorganisms are also essential for production of food such as yogurt cheese, bread, wine, beer and other fermented food. So it is very usual that there are so many chances of having diseases arising from food. Therefore, the contamination of these food products with the pathogens and its persistence, growth, multiplication and/or toxin production is of great concern for public health. A number of pathogens has been responsible for food-borne diseases and among them Staphylococcus spp., Escherichia coli and Salmonella spp. tops the list. Staphylococcus aureus is an important foodborne pathogen, found in a good extent in milk as it is a nutrient enriched medium for their rapid growth and because of that milk and dairy products get frequently contaminated by this pathogen. Several researchers have reported the high prevalence of Staphylococcus aureus in the raw milk sample even in pasteurized milk as they can produce heat-stable enterotoxin [7-9]. However, in Bangladesh, the overall sanitary maintenances of the production, processing, packaging and distribution of milk and hygiene policies have unfortunately been reported not to be within the required standard [10,11]. So S. aureus, especially methicillin-resistant S. aureus (MRSA) related infections are parting as a heavier public health problem in both hospital and community setting, provoking a wide spectrum of diseases. The ubiquitous use of antimicrobial drugs in animal husbandry and other agricultural activities along with veterinary and human medicine has contributed to antimicrobial resistance setting-up. So beside proliferation of bacteria in milk and other milk products, an additional important concern is the increased antibiotic resistance, possessing a major clinical impediment in treatment especially in developing countries like Bangladesh [2,3,12-16]. Multidrug resistant bacteria can transmit to human from farm animals not only by direct contact with animals but also through contact with, or ingestion of those animal originated foods. So, the rise and spread of MRSA infections, associated with health care as well as community has raised an objection in infection containment intervention and treatment. In Bangladesh, a limited research has been the presence of S. aureus in raw milk and cheese [17-19] and still no systematic study has been conducted to isolate and identify this organism from entirely the milk and dairy products and reports are very scanty on the microbial status of different milk and dairy products. Considering these facts, present study attempted to isolate and characterize S. aureus in milk and dairy products available in and around Mymensingh town of Bangladesh (Figure 1). 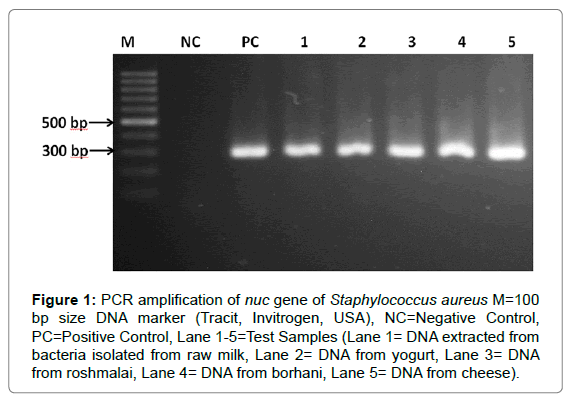 A total of 72 samples of 12 different types of milk and dairy products were collected from different shops and restaurants available in and around Bangladesh Agricultural University and Mymensingh City Corporation during the period from January 2017 through December 2017 aseptically using sterile eppendorf tube, falcon tube and polyethylene bag and then immediately transferred to the laboratory at fresh condition.

An aliquot of each sample inoculated into nutrient broth containing test tube and incubated for 6 hours for enrichment. Samples were then spreaded and streaked respectively onto the Staphylococcus Medium No. 110 agar (Oxoid, Egland) and Mannitol Salt agar (HiMedia®, India), specific media for Staphylococcus spp. growth and then incubated at 37°C for 48 hours. All the isolates were then subjected to sub-culture on Mannitol Salt agar for obtaining pure colony, Gram staining and culture on blood agar for morphological confirmation. Catalase and coagulase test were done for biochemical confirmation.

All the coagulase positive isolates were subjected to antimicrobial susceptibility test by following the disk diffusion method described by Kirby-Bauer [20]. In this study ten commonly available antibiotics such as norfloxacin (30 μg), ciprofloxacin (5 μg), nalidixic acid (5 μg), methicillin (5 μg), oxacillin (1 μg), tetracycline (30 μg), gentamycin (10 μg), erythromycin (15 μg), vancomycin (30 μg) and penicillin (10 μg) of Oxoid and Himedia were used. The zones of complete inhibition were observed and diameters were measured and interpreted as susceptible, or resistant according to the CLSI given standard (Clinical Laboratory Standards Institute) (Figure 2) [21]. 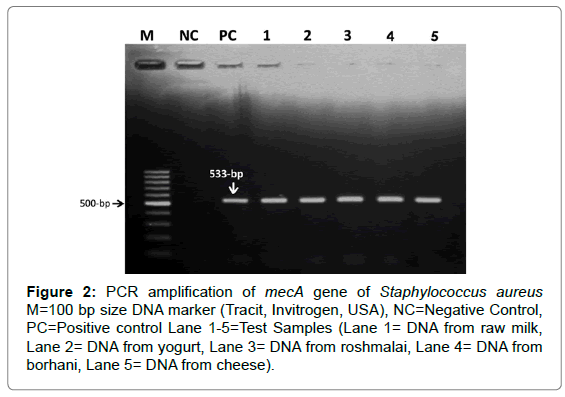 Table 1: Primers used in this study with sequences.

Out of 72 samples tested, all the samples were found positive for Staphylococcus spp. that was confirmed by observing the cultural and morphological characteristics of the isolates grown on specific culture media. The appearance of Staphylococcus spp. on the Staphylococcus Medium No. 110 agar found deep orange colored pigmented colony which was similarly reported in Bacteriological Analytical Manual, 5th edition, AOAC, Washington DC [25]. According to Kabir et al. [19] S. aureus growth on mannitol salt (MS) agar was confirmed by the changed color of media and formation of yellow color colonies due to fermentation of mannitol and in Gram’s staining, the organism was Gram positive, violet color, cocci shaped and grapes like cluster under light microscope.

To confirm the initial pathogenicity of the isolated S. aureus, catalase and coagulase test were performed as biochemical test that showed 57 isolates were coagulase positive out of 72 and then those were subjected to culture on blood agar (Table 2). Catalase and coagulase positive S. aureus were identified by observing the characteristics of bubble formation and formation of curd like clotting accordingly [19]. 12 (25.53%) S. aureus was isolated from 47 raw milk sample on the basis of cultural and biochemical properties where all positive isolates showed β-hemolysis on 5% sheep blood containing blood agar media in a study reported by Jahan et al. [17], but this study revealed 52 β-hemolysis producing isolates out of 57 coagulase positive isolates.

The coagulase positive isolates further subjected to antibiotic susceptibility test by using 10 antimicrobials among which the highest resistance was observed against penicillin and lowest against vancomycin. The resistance pattern of coagulase positive S. aureus isolates in this study revealed that the most of the isolates (79.16%) were resistant to more than three antimicrobial agents (Table 3). Some isolates (24.56%) showed resistance against both methicillin and oxacillin and intermediately resistant against vancomycin. The pathogenic isolates found in milk and cheese samples exhibited the multi-drug resistance trait against six commonly used antibiotics among which coagulase positive S. aureus was found to be highly resistant against oxacillin (100%) and methicillin (58.82%) as reported by Nusrat et al. [18], which were significantly higher than the present study. Based on antibiotic sensitivity test, about 20-25% S. aureus isolates were found multidrug resistant and 100% were resistant to penicillin which are very similar to the findings by Jahan et al. (Table 4) [17].

For molecular characterization by PCR among the 14 isolates of methicillin and oxacillin resistant all were nuc positive and 8 isolates from raw milk, yogurt, roshmalai, borhani and cheese were found to be mecA positive where none of them showed positive result for mecC gene but no isolates were mecA positive in a similar study reported by Jahan et al. [17] and yet no report is available on S. aureus expressing mecC gene in Bangladesh. Characterization of MRSA by PCR through mecA gene demonstration has established as a gold proof method [26,27]. Indicating resistance against β-lactamase drug group the mecC is a very emerging gene. The emergence of this mecC gene is not yet understood sufficiently. It was described first in samples from bulk tank milk of southwest England region, also have been found in other type of samples at 13 European countries from 14 distinct wild and domestic animal varieties (Table 5) [27].

To the best of our knowledge, this is the first study investigating mecC gene in S. aureus isolates from milk and dairy food consumed by people in Bangladesh. Detection of S. aureus isolate carrying mecC gene will indicate a potential public health problem for our country and may highlight the importance for surveillance and monitoring program of reservoirs related to animal and environment for the existence and evaluation of mecC gene harboring S. aureus strains (Figure 3). 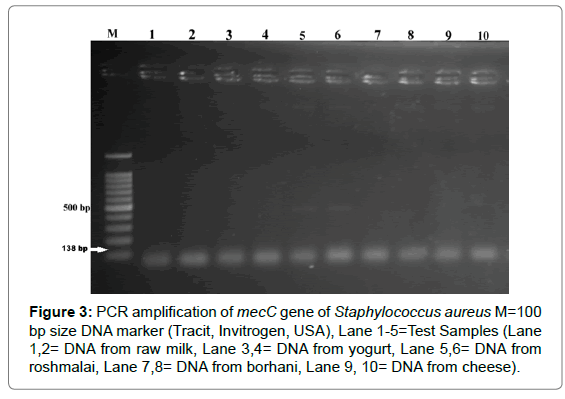 Foodborne pathogens like toxigenic S. aureus can easily be transmitted through the food produced from raw milk under neglected hygienic conditions. Animal-associated strains of MRSA isolation from different dairy products like raw milk or a raw-milk cheese has reported worldwide. This study find out the status of the MRSA present in milk and dairy products available in Mymensingh city of Bangladesh. Considering the outcome of this study a control strategy may be developed to prevent and control the harmful effects of MRSA on public health in aspect of our country. In conclusion, our findings revealed that the milk and dairy product sold in and around Mymensingh town are contaminated with multidrug resistant S. aureus which are very alarming for both human and animal health.

This study has been conducted by the support from Ministry of Education and Ministry of Science and Technology, Bangladesh.

Copyright: © 2018 Haque ZF, et al. This is an open-access article distributed under the terms of the Creative Commons Attribution License, which permits unrestricted use, distribution, and reproduction in any medium, provided the original author and source are credited.