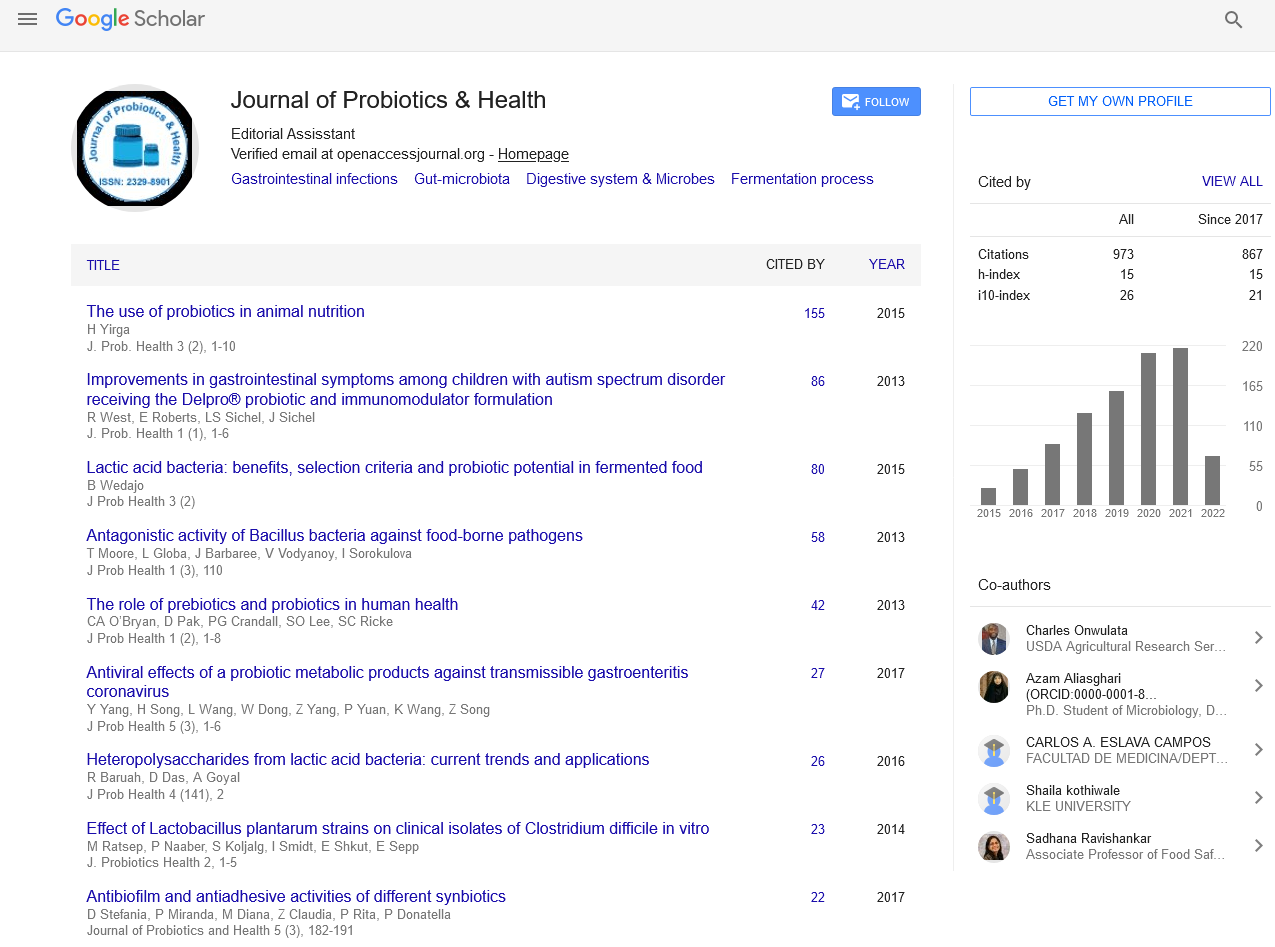 The human gastrointestinal (GI) tract is colonized by an abundant and diverse microbiota that has a significant role in mucosal protection, regulation of GI immune tolerance, digestion of fecal matter, and vitamin K synthesis. However, numerous factors (e.g., antibiotic treatment, diet, psychological and physical stress, etc.) may lead to physiological disturbances in the gut?s microflora. Such alterations may contribute to many chronic and degenerative diseases (e.g., Crohn?s disease, ulcerative colitis, rheumatoid arthritis, irritable bowel syndrome, inflammatory bowel disease, and other ?intestinal dysbioses?) that often are particularly problematic in young children and the elderly. One of the approaches used to alleviate those disorders has been the ingestion of probiotic microorganisms; i.e., nonpathogenic microorganisms that improve health when ingested in sufficient quantities, presumably by beneficially altering the microbial balance of the human GI tract. Traditionally, various bacterial species have been used as components of such ?probiotic cocktails,? with lactobacilli and bifidobacteria being the most commonly used. These preparations are usually delivered in various commercial products and dietary supplements, healthy drinks (e.g., tomato juice), infant formulas, and other foods. A probiotic approach is possibly one of the most natural and environmentally-friendly prophylactic and therapeutic approaches available today, and it has been gaining in popularity in the United States and other countries. However, one approach for a ?probiotic intervention? that has received very little, if any, attention in the past is to use lytic bacteriophages/phages to target and kill specific ?problem? bacterial pathogens in the GI tract. Lytic phages are viruses that attach to and kill their bacterial hosts by lysing them during their internal replication cycle. The process is very specific; i.e., the phages only attack their targeted bacterial hosts, and they cannot infect human or other eukaryotic cells. The approach of using lytic phages as part of a probiotic diet is similar to that used for bacteria-based probiotics, which are administered during a period of time and act by favorably conditioning the gut?s microflora. The key difference between bacteria-based probiotics and lytic phage-based probiotics is that the former introduce nonpathogenic bacteria into the GI tract (in order to interfere with the ability of pathogenic bacteria to colonize the GI tract and cross the intestinal mucosa); whereas, the latter target and kill specific pathogenic bacteria in the GI tract. The presentation will describe the history of phages and phage therapy, pros and cons of the approach, and focus on the use of Shigella phages as part of probiotic intervention for managing shigellosis in humans. It will also explore the impact of phages on normal gut microflora and how it compares to that triggered by antibiotic therapy. Because of their high specificity, phage-based probiotics have a very gentle effect on the overall gut microflora, which may further enhance their protective effect. The approach may serve as a platform technology for developing a new class of prophylactic and/or therapeutic products for managing shigellosis and other infections whose etiologic agents have an oral portal of entry and require GI tract colonization in order to cause disease. Moreover, because of their ability to kill specific bacteria without affecting other bacteria, phage-based probiotics may be valuable tools for advancing our understanding of the important physiological roles that some normal flora bacteria have in the mammalian GI tract. That knowledge may help to identify new strategies for improving human health in areas not involving the prevention and treatment of bacterial diseases; e.g., reducing the occurrence of obesity and some forms of cancer, where the GI tract?s normal microbiota may have a role.

Alexander Sulakvelidze, PhD, is Chief Scientist of Intralytix, and an internationally recognized expert in phage technology. He has published extensively on the subject of phage therapy, including co-editing a major book about bacteriophages in 2005. He is the author of several issued and pending patents in the field of phage therapy. He is currently serving as Editor-in-Chief of the journal Bacteriophage , and as an ad hoc reviewer for several other journals and funding agencies.