Introduction: Perforated appendicitis very common abdominal emergency in children and nonoperative management with Ampicillin Gentamicin and Metronidazole (AGM) has shown good results. Recent data show that single daily dosing of Ceftriaxone and Metronidazole (CM) is as safe and effective as ampicillin gentamicin and clindamycin for treatment of perforated appendicitis after surgery in children. Treatment of complicated appendicitis in children with once daily CM can decrease the risk of in drug administration’s mistake, require the patient to be connected to the IV line for short time only once a day, may cause less IV line infection and may cost less. The aim of this study was to compare the effectiveness, and safety of CM with the traditional triple antibiotic for conservative treatment of complicated appendicitis children. Methods: A prospective, open, randomized study conducted from July 1st 2008 to June 30th 2009. Included were children younger than 14 years with complicated appendicitis who were randomly assigned to therapy with either CM as a single daily dose or AGM. The outcome variables compared were maximum daily temperature, duration of fever, time return to oral diet, length of antibiotic therapy, results of repeat WBC counts, need for abdominal abscess drainage, length of hospitalization and complication. Results: Overall 22 and 21 children were assigned to CM and AGM regimens respectively. There were no any significant differences in all clinical outcomes parameters between the two groups. Conclusions: Single daily dosing of CM is as safe and effective as the triple antibiotic regimen and has significant advantages for the conservative therapy of complicated appendicitis in children.

AGM, or Ampicillin, Gentamicin, and Clindamycin (AGC) regimens are the standard triple antibiotic therapy for complicated appendicitis in children, providing broad-spectrum coverage for both aerobic and anaerobic gram-positive and gram-negative bacteria. The current approach to complicated appendicitis in children in our institution has been a nonoperative management including initial IV therapy with AGM, switching to oral amoxicillin/clavulanate after the patient became stable, afebrile and able to tolerate oral food and interval appendectomy 8 weeks after discharge [1-4].

Ceftriaxone is a 3rd generation cephalosporin with broad spectrum anti aerobic gram negative enterobacteria. The CM combination was found in 1991 to be more effective than Ampicillin/Netilmicin/ Metronidazole in the treatment of bacterial peritonitis [5], has been demonstrated to provide comprehensive coverage for most enteric organisms in prophylactic studies as well as traumatic and surgical contamination studies [6-8] and have been shown to be equal to the monotherapy schedule of piperacillin and tazobactam in children with perforated appendicitis [9]. A recent prospective study showed that CM combination in a single daily dosing regimen had the same efficacy and safety as AGC for therapy of children with perforated appendicitis following surgery and also had some clinical benefits and cost less [10].

Treatment of complicated appendicitis in children with once daily CM has some important advantages including simple dosing schedule that can decrease the risk of mistake in drug administration, require the patient to be connected to the IV line for short time only once a day instead of most of the day for the triple antibiotics, may cause less IV line infection and may cost less.

The aim of our study is to assess the safety and efficacy a single daily dose of CM comparing to the AGM regimen for nonoperative management of complicated appendicitis in children.

A prospective, open, randomized study was done at Ha’emek Medical Center, Afula, Israel, from July 1st, 2008 to June 30th, 2009. Approval was obtained from the Ha’emek medical center Internal Review Board (IRB) before enrolling patients in this study. Patients were subsequently enrolled only after obtaining consent from the patient’s legal guardian. The consent forms and consent process were carefully evaluated by the IRB on a continual basis.

Complete blood count, renal and liver function test were obtained before starting the antibiotic treatment and repeated on day4 in all patients. In the group treated with AGM, serum trough gentamicin concentration was drawn before the fourth dose with normal level considered as <2 mcg/ml. On the 5th day, patients who had been stable, afebrile, tolerating diet and with normal blood count were discharged home with oral amoxicillin/clavulanate 25 mg/kg Q12H (up to 1.75 g/d) therapy for further 7 days. If the patients were still febrile or had leukocytosis, antibiotic treatment continued and an AUS or CT was obtained to assess the presence of an abscess. Patients who develop an abscess were treated by percutaneous drainage and the original antibiotic regimen was changed to piperacillin and tazobactam based on the clinical situation. All patients had been followed for one year after discharge for any signs of complication such as repeat abdominal pain, abscess formation, readmission and bowel obstruction.

The difference between the parameters in the two groups were assessed by χ2 tests or Fisher exact tests for categorical data and 2 independent sample t test or the Mann Whitney test for continuous data. Significance was defined as P value ≤ .05. Descriptive statistics were calculated as mean ± SD.

There were no statistically significant differences between the study groups in demographic data, medical history data and physical findings on admission, with the exception that a higher percentage of male were in the AGM group and the duration of abdominal pain before admission was longer in the CM group (Table 1).

There were no statistically significant differences in all clinical outcomes between the groups (Table 2 and Figure 1). 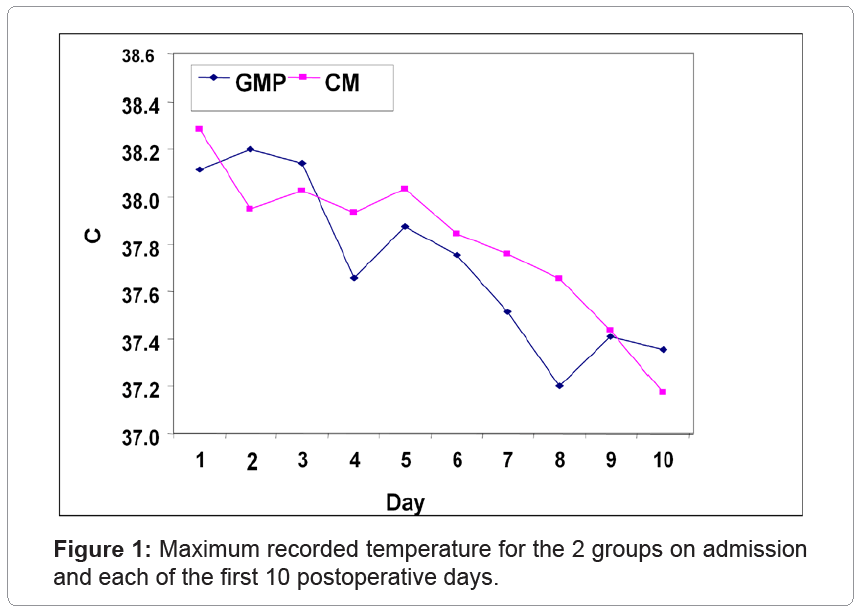 Figure 1: Maximum recorded temperature for the 2 groups on admission and each of the first 10 postoperative days.

The present study demonstrates that a single daily dosing of CM is as safe and effective as the triple antibiotic regimen for conservative therapy of complicated appendicitis in children. The number of patients in the study is small and there were several differences between the two study groups on presentation (Table 1). These include higher percentage of male patients in the AGM group, more days with abdominal pain prior to admission in the CM group and higher percentage of patients with an intraabdominal abscess in the CM group. However, these differences had no effect on the clinical outcome as well as on early and late complications and there were no differences in all clinical outcomes between the groups. The effectiveness and safety of single daily dosing of CM following appendectomy in children with complicated appendicitis has been reported in several studies done in the Children’s Mercy Hospital, Kansas City, USA. In a retrospective study the clinical and laboratory measures of 193 children, treated with AGC were compared to those of 57 children treated with CM regimens postoperatively. They showed that in children treated with CM, the mean maximum daily temperature became significantly lower from day 1 onward (P<.001), and the mean length of stay was shortened by 1 day (P=.03), and also saving of $237 per patient per day was demonstrated [10]. Following this retrospective study, in a prospective, randomized trial the efficacy and cost-effectiveness of CM and AGC regimens were compared in children with perforated appendicitis found at laparoscopic appendectomy. There was no difference in the mean maximum daily temperature, time to regular diet, duration of stay after surgery, abscess rate or wound infections between groups. However, the CM group resulted in significantly less antibiotic charges then the AGC group [11]. A prospective randomized study in children found to have perforated appendicitis at the time of laparoscopic appendectomy were randomized to antibiotic treatment with either once daily dosing of IV CM for a minimum of 5 days (IV group, 52 children) or discharge home on oral amoxicillin/clavulanate when tolerating a regular diet (IV/PO group. 50 children) to complete 7 days. There was no difference in the postoperative abscess rate between the two treatment groups. Discharge was possible before day5 in 42% of the patients in the IV/PO arm. The authors concluded that when patients are able to tolerate a regular diet, completing the course of antibiotics orally decreases hospitalization with no effect on the risk of postoperative abscess formation [12]. The effectiveness and safety of single daily dosing CM for conservative therapy of complicated appendicitis in children has been shown in a prospective, randomized trial in children who presented with a well defined abdominal abscess by abdominal CT. The children were randomized on admission to laparoscopic appendectomy (20 children), or intravenous antibiotics with percutaneous drainage of the abscess, followed by interval laparoscopic appendectomy approximately 10 weeks later (20 children). Both groups were treated with once daily CM. There were no differences in length of total hospitalization, recurrent abscess rates, or overall charges between the two groups [13]. The length of stay in our study was longer than in other studies, this is because a very conservative discharge policy in our hospital permits discharge children after all the parameters return to normal. Management of complicated appendicitis in children with once daily CM has some important clinical benefits including simple dosing schedule that can decrease the risk of mistake in drug administration, demand the patient be connected to the IV line for short time only once a day instead of most of the day for the triple antibiotics, cause less IV line infection and may cost less.

Our results showed that a single daily dosing of CM has the same safety and efficacy as the triple antibiotic regimen with AGM for conservative treatment of complicated appendicitis in children. Based on these results and the significant advantages of single daily dosing we recommend the CM for conservative treatment of children with complicated appendicitis.

Citation: Yardeni D, Kawar B, Siplovich L, Rosine I, Zebidat M, et al. (2013) Single Daily Dosing of Ceftriaxone and Metronidazole is as Safe and Effective as Ampicillin, Gentamicin and Metronidazole for Non-operative Management of Complicated Appendicitis in Children. Pediat Therapeut 3:177.

Copyright: © 2013 Yardeni D, et al. This is an open-access article distributed under the terms of the Creative Commons Attribution License, which permits unrestricted use, distribution, and reproduction in any medium, provided the original author and source are credited.