In the present study a new method has been developed for the separation and estimation of common metal cations (Li+, Na+, K+), Methyl diethanolamine (MDEA) (and types of alkyl amines) and their degradation products including ammonium ion used in amine processing solution. The acid treating amines such as dimethyl amine (DMA), Diethyl amine (DEA), Dipropylamine (DPA), Diisopropyl amine (DPA) and Dibutyl amine (DBA) in amine processing solution have been separated by Ion Chromatography (IC) using conductivity detector in single column mode. Desired separation was achieved within 20 min using mixture of 3 mM CH3SO3H+CH3CN (90:10) as mobile phase on Dionex Ion Pac SCS1 column at temperature of 30°C. Calibration curve for all the cations (Li+, Na+, K+, NH4+) in the concentration range of 2.5-20 ppm and 3-100 ppm for dialkyl amine were plotted and it was observed that the correlation coefficient (R2) list in between 0.9980 and 1.0. Relative Standard Deviation (RSD) observed for all the abovementioned cations were in the range of 0.81-2.33%. Recovery of all the cations at different concentrations of amine processing matrix was in the range of 80-120%. The lower Limit of Detection (LOD) for Li+, Na+, K+, NH4+ was 0.5 ppm, and for MDEA and all above alkyl amines was 1.0 ppm. The operational simplicity of this method in terms of accuracy and precision can be a good alternative for the estimation of above ions in amine processing solution.

Ion Exchange Chromatography (IEC) has been in used for over half a century [1,2]. The application of chromatography for inorganic substances was mainly conducted during Manhatten project during the World War II for the construction of atomic bomb. IEC was originally described by Small et al. [3,4] in 1975 as a new technique for the characterization of a variety of solutions and their respective anions and cations. Since 1975, there have been steady developments and refinements in Ion Chromatography (IC) that has led to improved speed of separation, ion selectivity and detection limit. IEC is a very useful technique for the rapid separation and determination of ions in aqueous solution. It does not require any sample preparation or skill and still remains one of the most powerful instrumental techniques for the estimation of anions and cations in diverse sample matrices. Over the past decades, interest in the analytical chemistry of alkyl amines has been mainly encouraged because of environmental concern [5-7]. Amines are industrial chemicals with a wide range of applications. Anthropogenic sources include cattle feed lot operations, waste incineration and sewage treatment. Amines are also emitted from car exhausts. Airborne amines are of special interest because of the role they play in various atmospheric processes [8]. Some amines are toxic and can undergo reaction to form variety of products among which N-nitroso amines are considered as highly carcinogenic [9]. Due to its sensitivity and possibility of simultaneous multi-element determination, the IC method requires only small amount of sample. The stability of the separation system, good selectivity and speed of analysis allow the range of IC applications to increase continually [10]. The IC is generally used for the trace level analysis of chemical and pharmaceutical [1,2,11], biological [12,13], environmental [14,15], oil product [16] and water samples [17-20]. Recent scenario also shows rapid use of this technique in petroleum and fossil fuel industries [5,6,21]. This technique has also been explored for the analysis of biodiesel for the determination of metallic ions [22]. Several methods are available for the estimation of alkanolamines such as MEA (monoethanalamine), DEA, MDEA by IC [23-27]. The application of IEC for organic amine ion is not common, may be because of the relatively low sensitivity with which these species can be detected by using conductometric method. Amine processing solution is not only used in refineries for the absorption of some acidic gases such as hydrogen sulfide and carbon dioxide, but also used for the extraction of other contaminants such as organic acids and sulphur species which form heat stable salts. These heat stable salts tie up a part of the amine and reduce the absorption capacity of the solution and results in building up of heat stable salts which in turn increases the viscosity of the solution, corrosion of the system, and raises the cost of maintenance of the refineries. Hence, monitoring of amine and other cationic species is needed to determine the efficiency of the processing of amine. Few natural gas wells may contain high concentration of Carbon dioxide (CO2) and Hydrogen Sulphide (H2S) which are weak acidic gases. The high sulphide content and acidity from dissolved carbon dioxide makes sour gas undesirable as a commercial product. Therefore, sour gases are typically treated with amine solutions (e.g., ethanol amine, methanol amine and MDEA) to absorb CO2 and H2S gases. An aqueous solution of a strong base such as NaOH or KOH will not readily release these gases once dissolved. Whereas, amine processing solution containing any dialkyl amine or mixture of them is rather weak base and will re-release H2S or CO2 when this solution is heated (Figure 1). Therefore, the amine processing solution is recycled in a regeneration unit, which heats the amine processing solution from the scrubber unit to release these acidic gases into a purer form and returns the regenerated amine to the scrubber unit again for reuse. The amine solution also removes other contaminants from compounds such as oxalic acid, propanoic acid, formic acid, acetic acid, thiosulfate and thiocyanate. These respective anions bind with the amine and form salts which are collectively termed as ‘Heat Stable Amine Salts’ (HSS). High concentration of heat stable salt content in the amine solution increases the viscosity of the solution, reduces the absorption capacity of the acids and increases corrosion induced maintenance cost. These amines waste solutions must also be characterized to comply with discharge permit. Present study establishes a method for the determination of said amine (Figure 2) such as di-methyl amine, diethyl amine, di-propyl amine, di-isopropyl amine, di-butyl amine and MDEA as well as common metal cations by IC using conductometric detection system in non-suppressed ion mode. This method allows fine separation of alkali metal cations with excellent reproducibility, thereby yielding better estimation and accuracy of data. The literature survey has been thoroughly carried. This is for first time that simultaneous analysis of inorganic ions as Li+, Na+, NH4+, K+ and organic ions as DMA+, MDEA+, DEA+, DPA+, DIPA+ and DBA+ have been carried in amine processing solutions in non-suppressed mode. 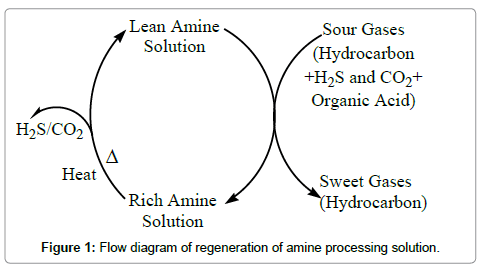 The determination of common metal cations such as Li+, Na+, K+, and types of dialkyl amines such as DMA, MDEA, DEA, DIPA, DPA, and DBA and their degradation products including ammonium ion are important in amine processing solution. Good separation of inorganic ions was achieved in 3.0 mmol CH3SO3H (aq), 100%. However organic ions could not be resolved in this mobile phase due to poor compatibility of organic molecules in aqueous system, so mobile phase combination of 3 mmol CH3SO3H and CH3CN, in the ratio of 90:10 was used for the separation. In this eluent system, all analytes were well separated within 20 min on Ion Pac SCS1 column at 30°C. The retention time and resolution of metal cations (Li+, Na+, K+), NH4+ ion, MDEA and dialkyl cations are given in the Tables 1 and 2 and representative ion chromatogram is given in the Figure 3. The resolution between subsequent chromatogram peaks have been calculated and mentioned in Table 2. The resolution value has been found to >1. Calibration curves were drawn at various concentrations to check the linearity of the method. Good linearity was observed for all the cations and linear correlation coefficient (R2) in the range of 0.9980-1.0 was obtained and summary of calibration is given in the Table 1 and Figure 4. Limit of Detection (LOD) and Limit of Quantitation (LOQ) were calculated [28] and the results are shown in Table 2. The LOD and LOQ were observed in the range of 0.037-0.879 and 0.111-2.638 respectively. 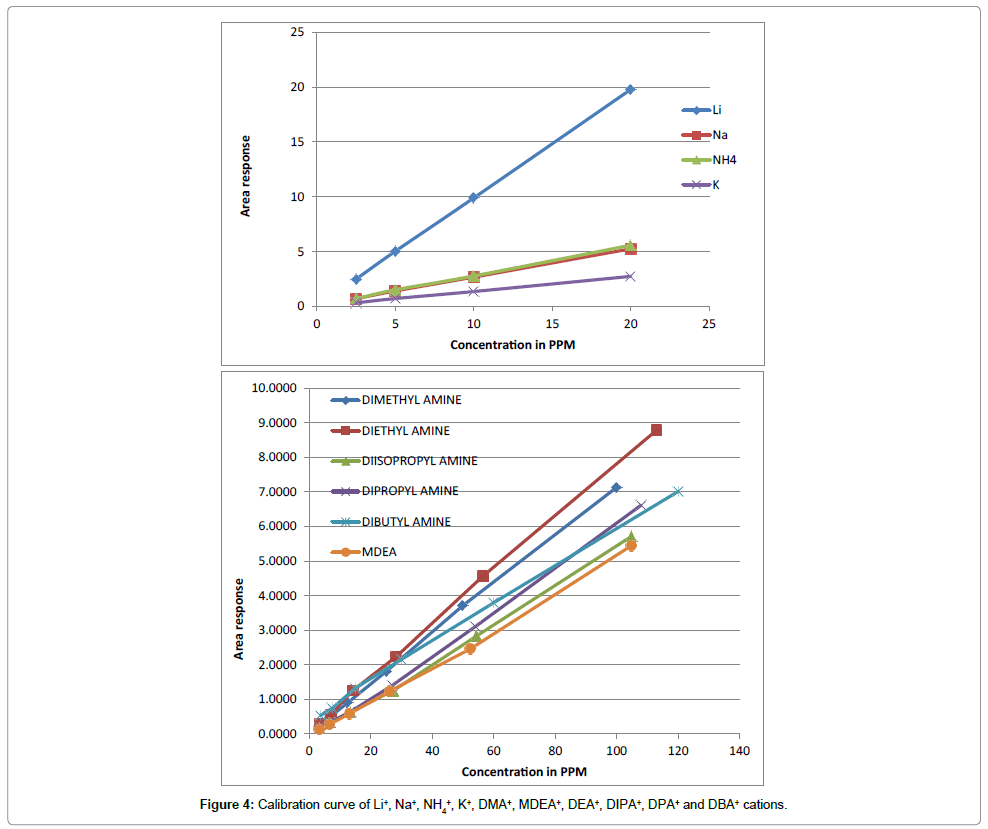 Table 1: Summary of the calibration and Standard Deviation for each specific cation.

Table 2: Peak resolution (R), LOD and LOQ for all cations.

Mixture of standards was injected 10 times under identical condition of separation into the IC system to check the repeatability. Areas corresponding to each analyte were recorded and standard deviation was calculated. RSD falls in the range of 0.8 to 2.33 except for DBA which was 18.3 and given in the Table 1. The reason behind the high RSD value for the DBA was broadening of peak caused by its larger size and long retention time as compared to other cations such as Li and Na.

Recovery study of all the above-mentioned cations, ammonium ions, and dialkyl amines were done in the real matrix i.e., amine processing solution which was obtained from an IOCL refinery. In that amine processing solution matrix, mixture of standards in different concentration such as 4 ppm, 8 ppm, 12 ppm, 16 ppm and 20 ppm were doped prior to injection, mixed thoroughly, and kept for 10-15 min for matrix effect on the analyte. In all the cases recovery of analyte from the matrix was in the range of 80-120% except ammonium ion and diethyl amines which were recovered 70.14% and 125% respectively, at doped condition of 4 ppm. Results of recovery experiments are given in the Table 3.

Determination of cations in refinery samples

Samples received from Indian oil refineries composed of amines, cations etc. were analysed under identical conditions. All the analytes were well separated on Ion Pac SCS1 column at 30°C by ion chromatograph in non-suppressed mode.

Samples from refinery A

Samples from refinery B

Three aqueous samples of refinery B were analysed by IC. Results are shown in the Table 5 and Figure 6. Two samples from Stripped Sour Water (SSW) and Sulfur Recovery Unit (SRU) contain very less amount of Na+ (6.2 ppm) and K+ (1.99 ppm) ion as compared to NH4+ ion (~47ppm). Similarly, high amount of NH4+ (4595.6 ppm) was observed in the Residue Fluid Catalytic Cracker Unit (RFCCU) sample as compared to Na+ and K+ ions. The estimation to such a low concentration of Na+ and K+ ions in samples from refinery B indicates that the IC is an excellent technique to differentiate between sour water and stripped sour water. 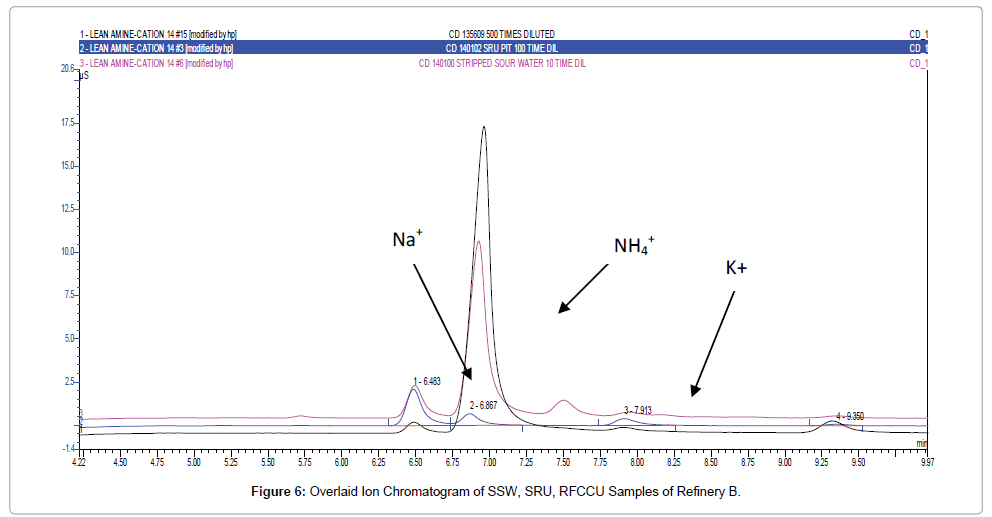 Table 5: Samples from Refinery B.

Four lean amine samples were received from unit-A and unit-B of refinery C. These samples were subsequently analysed by using this method. Results are shown in the Table 6 and Figure 7. The presence of cations in the unit-A was less as compared to unit-B. 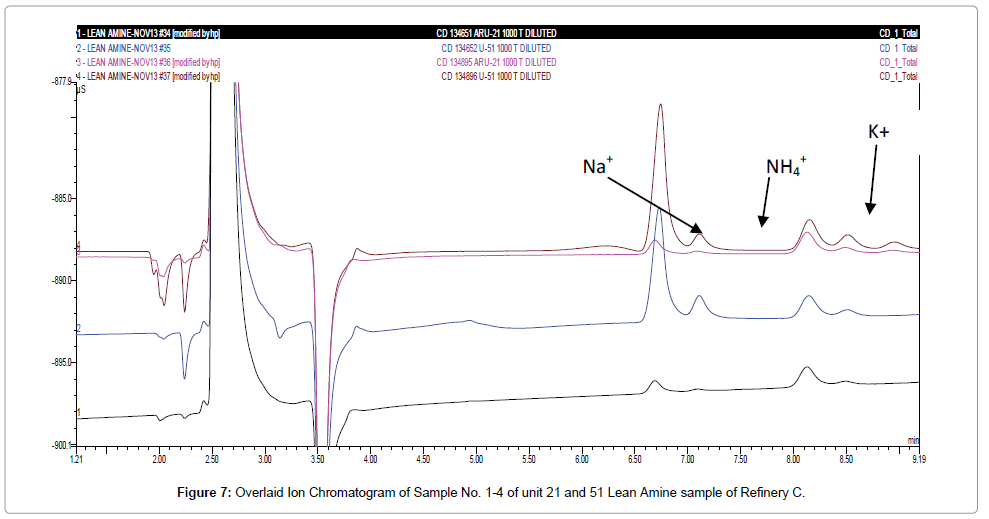 Figure 7: Overlaid Ion Chromatogram of Sample No. 1-4 of unit 21 and 51 Lean Amine sample of Refinery C.

Samples of reclaimer unit from refinery C were received and injected in the IC instrument for the detection of cations. Only one ion i.e., Na+ ion was identified in the range from 2663 to 12208 ppm by this method. Naphtha Cracker Plant reclaimer outlet sample contains high amount of Na+ ion which is nearly 10959 to 12208 ppm as compared to PNCP reclaimer inlet which shows 4857.8 - 5721.23 ppm. Results are given in the Table 7 and overlaid chromatogram is also shown in the Figure 8.

A fast method based on IC for simultaneous determination of common metal ions and dialkyl amines by ion chromatograph in no suppressor mode has been developed. The method permits excellent separation, reproducibility and estimation accuracy. Majority of the samples contains Na+, NH4+, K+ and MDEA. All analysed samples do not contain any said dialkyl amine. In addition, higher concentration of MDEA can also be analysed by this method because it appears in the chromatogram between DMA and same amount of MDEA was present in the sample as per area count in the chromatogram. The RSD (N=10) of peak areas was in the lower range of 0.8 to 2.33 except DBA which was 18.3.

We thank Mr. R. Suresh, Executive Director, R&D (I/C), IOCL Faridabad, for their keen interest, support, and encouragement in carrying out this work.

Copyright: © 2018 Singh R, et al. This is an open-access article distributed under the terms of the Creative Commons Attribution License, which permits unrestricted use, distribution, and reproduction in any medium, provided the original author and source are credited.