Background: MRI is now established as the non-invasive modality of choice for the diagnosis of liver iron overload. Recently, it has been used to estimate myocardial iron overload in adult patients with acquired anemia.

Objective: To assess the value of gradient-echo T2* in monitoring and screening of both liver and cardiac iron overload in non-transfusion dependent thalassemia (NTDT).

Material and methods: This prospective study was conducted on children with mean age 11 years. Measurements were obtained in the same 1.5 MRI examination, followed by calculation with the reference spread sheet and then, the results were compared to the standard serum ferritin levels.

For these patients, iron overload resulting from increased intestinal iron absorption represents an important clinical problem which progresses with age [3]. Serum ferritin is a well-known marker for indirect measurement of iron overload; however its concentration is affected by other factors, e.g. inflammation, chronic disorders and liver diseases [4]. Liver biopsy is another essential diagnostic tool for the estimation of the extent of iron deposition in the hepatic lobules; however, being an invasive technique, it carries the risk of postinterventional complications e.g. bleeding. Also, it cannot assess the overall iron burden within the whole organ [5].

Iron chelation therapy is used for management of non-transfusion dependent thalassemia after the age of ten (more than fifteen years in deletional hemoglobin H phenotype). It is indicated when iron concentration reaches 5 mg Fe/g or over dry weight; or when serum ferritin level exceeds 800 ng/mL because these thresholds carry the risk of iron-overload related morbidity [6].

MRI is now established to be a reliable non-invasive modality for the diagnosis of liver iron overload [8,9]. This is owing to the high sensitivity of multi-echo gradient T2* sequences to the excess tissue iron. Quantitative assessment is achieved by fitting the appropriate decay model to the average signal intensity at various echo times, where tissue iron overload has magnetic susceptibility effect that cases the signal decay due to shortening of T2 time constant [10]. Recently, it has also been used to estimate myocardial iron overload in adult patients with acquired anemia. Gradient-echo T2* can rapidly assess cardiac iron overload in the same session of liver iron evaluation [11].

Therefore, the objective of this study was to assess the value of gradient-echo T2* in monitoring and screening of both liver and cardiac iron overload in non-transfusion dependent thalassemia. Measurements were obtained in the same 1.5 MRI examination, followed by calculation with the reference spreadsheet and then, the results were compared to the standard serum ferritin levels.

This observational cross-sectional prospective study was carried out in the period between April 2015 and August 2016 in the University Children’s Hospital and Magnetic resonance imaging (MRI) unit of Radiodiagnosis department. The study included children with mean age 11 years (ranged from 4 to 18 years), who suffered from nontransfusion dependent thalassemia (NTDT) attending or on follow-up in hematology outpatient clinic. The study was conducted after IRB approval as well as informed consent taken from legal guardians and assent from the older children (more than 12 year).

Detailed history and data including age, sex, and duration of illness, history of blood transfusion, affected parents or other affected siblings were recorded. Physical examination was carried out with special emphasis on complexion, growth parameters, and stage of puberty, size of the liver and spleen and presence of characteristic facies, splenectomy or cholecystectomy.

Regions of interest (ROIs) of fixed area were placed in the liver parenchyma, clear of the hepatic veins and biliary tree, to measure the signal intensity of the affected hepatic segments (Figure 1). For cardiac T2* assessment, ROI was placed in the interventricular septum in all images, encircling both epicardial and endocardial regions, but away from the right ventricular insertion points (to avoid artifacts) (Figure 2). 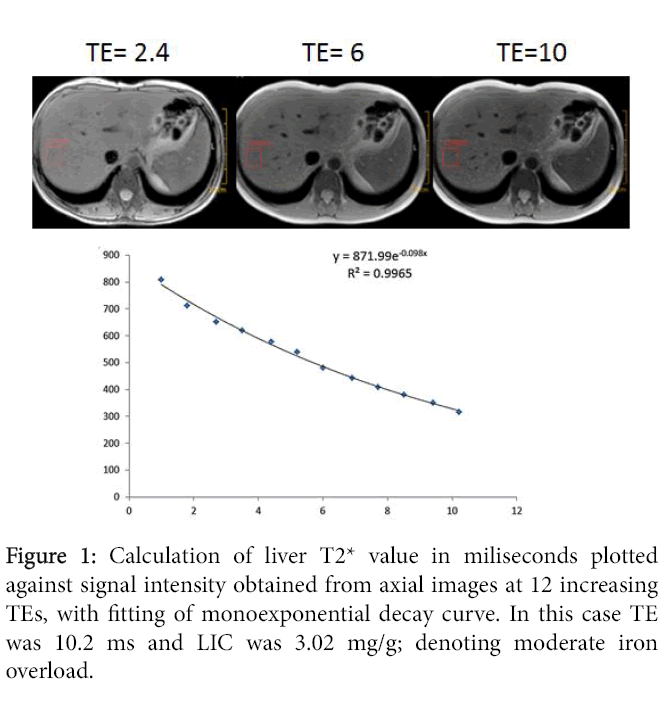 Figure 1: Calculation of liver T2* value in miliseconds plotted against signal intensity obtained from axial images at 12 increasing TEs, with fitting of monoexponential decay curve. In this case TE was 10.2 ms and LIC was 3.02 mg/g; denoting moderate iron overload. To create exponential decay curves TE and SI values were manually inserted into the Excel sheet where SI (y-axis) is plotted against TE (xaxis) to make a graph (Figures 1 and 2). Truncation of data was achieved by excluding points where SI was very low (flat).

The mean, median values and ranges of serum ferritin and T2* values of the liver and cardiac iron concentrations for the 3 phenotypes of NTDT are shown in Tables 1 and 2.

Table 2: T2* values of Liver and myocardial iron concentration in the 3 NTDT traits.

Table 4: Correlation of T2* values and serum ferritin with age.

Although numerous studies have confirmed MRI as the method of choice for tissue iron assessment in thalassemia major and transfusion dependent traits, only a few studies were conducted on NTT traits [16-18].

In our study 5 cases (16%) showed mild liver iron overload and 2 cases (6.5%) showed moderately elevated liver iron concentration. All other cases (77.5%) had T2* values within the normal range. Hepatic T2* values significantly correlated with serum ferritin and with patients' ages (Tables 3 and 4). These findings are in agreement with previous studies which reported that although serum ferritin correlated with LIC, it was found to be a poor predictor of LIC [17,18]. They explained this to be probably related to a portal first pass effect, less use of iron chelation therapy and older age of patients as compared with severe forms of transfusion dependent thalassemia.

Our results showed that all T2* values were within the normal range (Table 2). No significant correlation was found between myocardial T2* and serum ferritin and week correlation was found between hepatic and cardiac T2* values (Table 3). A previous study stated that marked discordance was found between hepatic and cardiac iron overload as well as myocardial T2* and serum ferritin in a large study cohort comprising 106 patients with thalassemia major [19]. Similarly, studies conducted on thalassemia intermedia trait reported the absence of cardiac iron overload despite hepatic iron accumulation [16,20,21].

Meanwhile, other studies reported cardiac T2* values above the pathologic threshold in thalassemia intermedia patients who were regularly transfused and on iron chelation therapy [16,17]. Accordingly the existence of factors like transfusion history, chelation therapy or co-pathology has an impact on the location and extent of cardiac iron accumulation [23,24]. Therefore, it is recommended that the decision for the start and regimen of chelation therapy should be spared for older age group patients with regular transfusion, cardiac hemosiderosis or liver fibrosis [17].

We recommend further investigation on NTDT on a wider scale and the inclusion of functional cardiac MRI assessment. A threshold value of LIC that could be associated with cardiac overload may be appreciated and should be sought.

Copyright: © 2017 Sarhan MM, et al. This is an open-access article distributed under the terms of the Creative Commons Attribution License, which permits unrestricted use, distribution and reproduction in any medium, provided the original author and source are credited.