A fastHigh Performance Liquid Chromatography (HPLC) method was developed and validated for the simultaneous quantitative determination of phenylbenzimidazole sulfonic acid (PBMSA), benzophenone-3 (BZ3), diethylamino hydroxybenzoyl hexyl benzoate (DHHB), octocrylene (OC), butyl methoxydibenzoylmethane (BMBM), ethylhexyl methoxycinnamate (EMC), ethylhexyl salicylate (ES), and homosalate (HS) which are eightorganic UV-filters of the most commonly used in cosmetics and sunscreens. A solution pH 2.0 of phosphate buffer, methanol, and acetonitrile in proportions 15:3:82 respectively as mobile phase was used in isocratic conditions, combined with a Purospher Star ® Performance RP-18e column and eight minutes of analysis time. The proposed method was validated following the recommendations of International Council on Harmonization (ICH) and the Food and Drug Administration (FDA) guidelines. All parameters examined were found to be well within the stated guidelines. From the robustness test, it was possible to identify that pH of the buffer and the vial material are the critical methodological parameters for the analysis of butyl methoxydibenzoylmethane (BMBM), whereas for phenylbenzimidazole sulfonic acid (PBMSA) they were, the vial material, volume ofNaOH solution and sonication time and temperature.

Exposure to UV radiation in controlled doses has been employed with therapeutic benefits forthe psoriasis treatment [1], and even aesthetic as nail drying [2]. Currently, people are exposed to sunlight radiation for different reasons, such as the progressive damage to the ozone layer, geographic location, social customs, professional practices among others [3,4].

Exposure to UV radiation promotes changes in the energy levels of molecules, especially chromophore molecules, which are part of cellular tissues and triggers a cascade of radical-mediated reactions, and for that reason, the well-known oxygen-reactive species associated with premature aging, non-melanoma skin cancer (NMSC), DNA or RNA chain damage, among others occur [3]. A source of UV radiation is solar radiation (SUVR), which has been classified by the International Agency for Research on Cancer (IARC) in group I as a carcinogen. Therefore, it is considered a public health problem [6].

In this situation, one of the products currently offered and whose objective is providing protection against the solar radiation that reaches the earth's surface are the sunscreens [7], which work similarly to how the ozone layer does. Molecules of organic and inorganic nature, also known as chemical and physical filters, respectively, are used as filters. Those molecules prevent human health damage through different mechanisms. Both prevent damage to the skin by incident radiation. However, this classification gives rise to the possibility of misinterpreting concepts, although both filters are chemical substances, they differ in their composition and in their mode of action as a sunscreen.

Physical filters are named due to their characteristic interaction with incident radiation. Absorption, dispersion, and reflection phenomena take place in this type of filter and in turn, are determined by aspects of the system such as film thickness, particle size, among others [8]. Chemical filters work by absorbing energy radiation and promoting molecular structural arrangements [9].

The quantity and chemical nature of molecules in personal care products with the properties previously mentioned are regulated by various entities, depending on the geographical area where it intends to market, one of them being the Food and Drug Administration (FDA) in the United States.

Butyl Methoxydibenzoylmethane, benzophenone-3, octocrylene, ethylhexyl salicylate, ethylhexyl methoxycinnamate, homosalate [10] are part of the main organic UV-filters used at industrial level and approved by the FDA; however, other molecules that meet the same objective and are used industrially are diethylamino hydroxybenzoyl hexyl benzoate and phenylbenzimidazole sulfonic acid. These strict regulations respond to recent research on the negative impact that organic filters can have on the environment and human health [11-14].

In order to satisfy the requirements and thus commercialize safe products for the users and the environment, various methods of identification and quantification of sunscreens in emulsiontype matrices have been developed [15,16]. This work shows the development and validation of a fast method for the quantification of eight organic filters simultaneously (phenylbenzimidazole sulfonic acid, benzophenone-3, diethylamino hydroxybenzoyl hexyl benzoate, octocrylene, butyl methoxydibenzoylmethane, ethylhexyl methoxycinnamate, ethylhexyl salicylate, homosalate) in sunscreen products, using Liquid Chromatography of High Efficiency (HPLC).

The placebo used was an oil-in-water emulsion formulated and prepared in the laboratory (Chemical Analysis; Belstar S.A), in accordance with the manufacturing protocol for products that declare sun protection factor. This emulsion was used to determine the specificity of the method.

A Purospher Star ® Performance RP18e (5 μm) 150-4, 6 mm, C18 was used. The mobile phases used were filtered and degassed. Chromatography was developed under isothermal conditions at 40°C and isocratic elution at a flow rate of 1.2 mLmin-1. The detection wavelengths were: 308 nm for PBMSA, OC, EMC, ES, and HS, and 354 nm for BMBM, BZ3, and DHHB.

A homogenous mixture of a phosphate buffer solution pH 2.0, methanol, and acetonitrile in proportions 15:3:82 respectively, was employed.

50 mL of a stock solution containing 1.5 mgmL-1 approximately, of each standard was preparedseparately, each solution was made up to volume with diluent solution, with exception ofPBMSA due to its high polarity and low solubility in ethanol, which was prepared using 5 mL ofNaOH (0.1 N) and was diluted to volume with deionized water.

A 500 μL aliquot of each standard solution was transferred to the same 25 mL volumetric flask and was made up to volume with diluent solution. 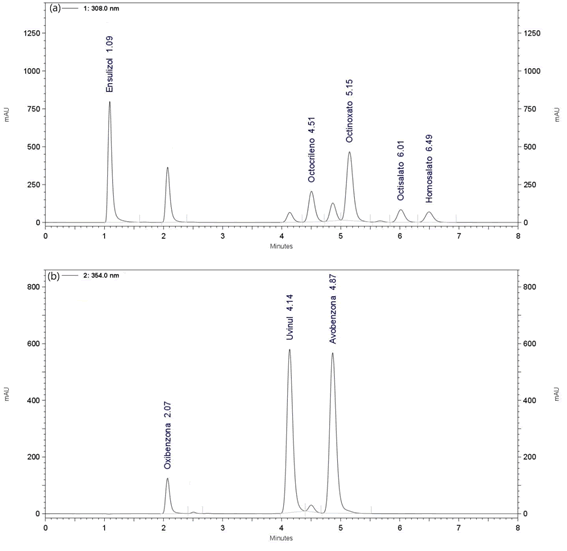 50 mg of sample was weighed and transferred to a 25 mL volumetric flask, 1 mL ofNaOH 0.1 N was added, followed by vortex treatment until complete dispersion, later 18 mL of diluent solution as added followed by an ultrasonic treatment of 15 min at 50°C. After the treatment, the sample reached room temperature and was made up to volume with diluent solution.

Subsequently, the sample was filtered through with Millipore filter membrane pre size 0.45 μm. 10 μL of each sample were injected into the chromatograph.

Protocol and process of validation

The validation process was based on the guidelines The International Council for Harmonization of Technical Requirements for Pharmaceuticals for Human Use (ICH), Validation of analytical procedures Q2 (R1) [17,18] The validation parameters evaluated were: specificity, linearity, repeatability, accuracy, intermediate precision, reproducibility, robustness, limit of detection and limit of quantification.

Specificity: It was determined from the comparison of chromatographic profiles of the mobile or diluent phase, of the mixture of all standards, the placebo, and the placebo enriched also the chromatographic profiles of the combination of standards, placebo, and enriched placebo after 4 hours exposed to daylight (photolysis) and 4 hours exposed to 60°C (thermolysis) independently. This comparison included observation of additional or missing signals.

This parameter was evaluated by means of linear least squares regression analysis, relating the area of each signal and the concentration of the injected standard.

Accuracy: The percent recovery of each standard was evaluated at three different concentration levels in the placebo with three preparations per level and two injections per preparation.

Reproducibility: The same commercial products were analyzed in two different laboratories, three preparations per product were performed and each preparation was injected in duplicate, calculated by the relative standard deviation (RSD).

Robustness: The ability of the method to remain unchanged by parameter variations was evaluated applying the Youden-Steiner model for 5 variables (pH of the buffer, ultrasound temperature, ultrasound time, vial material, volume of NaOH) using the placebo enriched. The method conditions were changed for the alternative conditions of each of the variables.

Limit of Detection (Lod) and Limit of Quantification (Loq):

The LOD and LOQ for the system and the method were theoretically determined according to the definition of the ICH Q2 (R1) [17,18], Based on the Standard Deviation of the Response and the Slope and verified experimentally, using the following mathematical expressions, Equation 1 and 2:

Where sB the standard deviation of the response and mB the slope of the calibration curve.

There was no evidence of signal interference between the placebo blank and the mobile phase at the two wavelengths proposed in the method. There is no difference between the retention times of the same standard when evaluated individually, in the mixture or in the placebo. The chromatographic profiles of the samples subjected to heat stress and exposure to sunlight showed no interference in their response due to the addition or loss of signals compared to the chromatographic profiles before stress. These results indicated that the extraction method together with the wavelengths used in the data acquisition were the appropriate conditions to specifically analyze the target analytes.

The most representative linearity parameters of the system and method for each of the analytes evaluated are shown in Table 1. The five concentration levels for the construction of each calibration curves were (0.01, 0.03, 0.06, 0.09 and 0.12) mgmL-1.

The linearity of the curve for each filter was constructed by relating the concentration (x) and the signal area (y). The trend line that best adjust the experimental data was obtained using the least-squares linear regression method with determination coefficients (r2) >0.99. The linear relationship between the two variables studied (concentration and response) was statistically verified by variance analysis using a Fisher test (Ft → 4.196, α → 0.05). These results suggest that there is a significant linear adjustment of each one of the studied systems in the evaluated concentration range.

The range of working concentrations was redefined from the data obtained from LOQ and for the system and method (Table 2).

Table 2: Limit of detection (LOD) and limit of quantification (LOQ).

The repeatability results of the system and method for each analyte expressed as coefficient of variation are shown in Table 3. In neither of the two systems evaluated this value exceeded 2.00%, which shows an acceptable degree of closeness between the data obtained in a relatively short period of time and under the same instrumental conditions.

The averages of the recovery percentage can be seen in Table 4. All the experimental values obtained in this evaluation are within the allowed range (98-102) % for an analytical method of quantification of chromatographic active ingredients. Using t student (tab → 2.306, α → 0.025) statistically significant difference was not find between the mean recovery value and 100% theoretical. Therefore, it concludes the extraction step of the analysis method is acceptably accurate.

The combinations carried out experimentally with the variations of the five parameters already mentioned can be seen in Table 5. The difference caused by each evaluated parameter (D) was quantified as indicated in the Equations 3-7.

Where Yi is the signal area of I-experiment in the Table 5.

The effect of each variable was compared with the critical value of each analyte, it was found that for two analytes there are significant effects due to the slight variation in some variables. Regarding phenylbenzimidazole sulfonic acid all the slight changes in the evaluated variables except the pH of the buffer, critically affect the result, and with respect to butyl methoxydibenzoylmethane, the critical variables were the pH of the buffer and the material of the vial.

The above suggests special care during the extraction stage of the analytes from the matrix but also during the chromatographic analysis avoiding pH changes in the buffer, using glassware in each of the stages, therefore it is important to guarantee the conditions proposed in the method.

The experimental results show an HPLC method that complies with the validation parameters indicated by the ICH. Additionally, it is a quick and easy method. Quick because it requires an analysis time of eight minutes, and simple due to the ease in the preparation of the sample and its development under isocratic conditions.

The data used to support the findings of this studty are available from the corresponding author upon request.

The authors thank the Innovation and Development department of the company Belstar S.A. for the financial support provided for the development and verification of analysis methodologies. This work was funded by Belcorp. All authors are Belcorp employees at the time of writing.