To restore continuity of the mandible after segmental mandibulectomy, a reconstruction plate with soft tissue transfer can be used as an alternative option to osseocutaneous tissue transfer. However, many surgeons carefully consider the use of this technique for central mandibulectomy defects because of the high rate of plate exposure. Although plate setback has been demonstrated to reduce plate-related complications, little information is available. This report describes the virtual surgical simulation of plate setback for reconstruction following segmental central mandibulectomy in a patient who was to become edentulous with anticipated postoperative lip incompetence and dysphasia.

The primary goal of mandibular reconstruction after segmental mandibulectomy is to restore oral function and esthetics. Vascularized bony reconstruction is an ideal approach as it has good long-term outcomes [1,2]. However, when bony reconstruction, which involves long and complex procedures, is unsuitable because of age, comorbidities, dentition and patient choice, a soft tissue transfer plate can be an alternative option.

Plate reconstruction is useful when a large soft tissue free flap is required because of extensive soft tissue resection and when dental rehabilitation is not anticipated in the fibula [3]. However, a high rate of plate exposure has been reported when used for mandibulectomy defects, including in the central mandible [4]. To reduce plate-related complications, soft tissue selections, plate coverage by soft tissue, and plate setback have been used during plate reconstruction [5]. However, little information is available regarding plate setback and the optimal amount of setback relative to the position of the original mandible is uncertain. Recently, virtual surgical simulation has provided good outcomes in maxillofacial bony reconstruction [6], and it could offer more predictable outcomes for plate reconstruction by preoperative planning of the plate size and position. This report presents the virtual surgical simulation of plate setback for reconstruction following segmental mandibulectomy, including the central mandible, in a patient who was to become edentulous with anticipated postoperative lip incompetence and dysphasia. 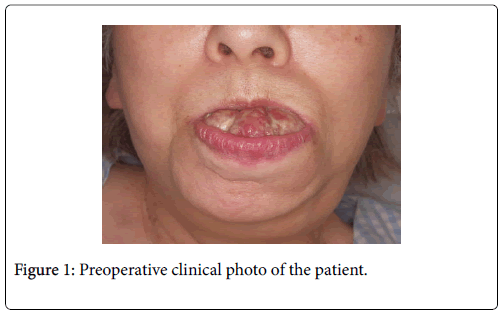 There were critical factors to consider during reconstructive planning: 1) becoming edentulous with no anticipated dental rehabilitation in the mandible after surgery, 2) skeletal class III relationship, and 3) the resection of the lower lip and floor of mouth. If the plate was bent and positioned according to the lower border of the original mandible, it might impair lip closure and swallowing and may exert excessive pressure on the soft tissue surrounding the plate. Therefore, plate setback was required and virtual surgical simulation was performed for plate planning. The anterior point (AP) of the buccal side of the simulated model was set back horizontally to the lingual side of the original mandible in the lateral view, which provided space for coverage of the plate with the ALT fascia (Figure 2). Figure 2: Rescoring FTND-Q4 “How many cigarettes do you smoke a day?” appropriately

The AP was vertically designed parallel to the imaginary occlusal plane through the gonial angle. It was assumed that the reconstructed vertical level by the plate and ALT flap would be similar to the original alveolar height. The anterior arch was designed according to the original shape and continued to the mandibular remnants in the horizontal view. Finally, the simulated mandibular model was fabricated. The reconstruction plate was pre-bent to fit the lower border of the simulated model and then the plate positioning guide was fabricated. The positioning guide enabled the mandible and the pre-bent reconstruction plate to be placed in stable positions and reproduced the simulated reconstruction [6].

The surgery was performed as preoperative surgical planning. The left partial glossectomy was decided intraoperatively because of poor blood flow, and the wound was closed. The plate was placed on the mandibular remnants using the positioning guide and fixed with titanium screws (Figures 3 and 4). The defects of the mandibular alveolus and floor of mouth were covered with the de-epithelialized ALT flap. The full-thickness defect of the lower lip was reconstructed by advancement flaps (Fries method) and lip competence was maintained. Because the ALT flap is thicker than the floor of mouth mucosa, ALT flap reconstruction reduced the original oral cavity space, which offered advantages in swallowing in this case. Even if the flap gradually atrophies with time, a tongue space similar to the original would be maintained. During the postoperative period, speech and swallowing rehabilitation was provided and a palatal augmentation prosthesis was delivered (Figure 5). Nutrition was obtained by mouth and gastrostomy tube feeding. Consequently, the plate planning provided optimal results for the patient. 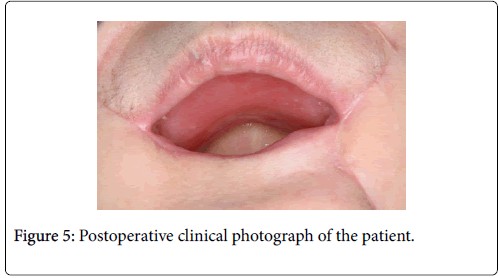 For immediate reconstruction after segmental mandibulectomy, a plate with soft tissue transfer is an option for patients who are intolerant of long operations. However, plate reconstruction following segmental central mandibulectomy has been showed a high rate of plate exposure. Although plate setback is useful for reducing platerelated complications, little information is available on this technique. This report outlines how to design the plate setback following segmental central mandibulectomy using 3D simulation and modelling, and how to apply the system to the surgery. The 3D simulation and modelling delivers valuable information and enables surgeons to fully understand the surgical process, which ensures the quality of the plate reconstruction. Further study with a number of patients is necessary to clarify the optimal degree of setback relative to the original mandible.

A plate with soft tissue transfer is a useful reconstruction following segmental central mandibulectomy for patients who are intolerant of long operations.

To reduce postoperative complications, the multidisciplinary managements including surgical simulation, surgical treatment and functional rehabilitation in perioperative periods are necessary for the patients who undergo segmental mandiblectomy. 3D simulation and modeling of plate setback for reconstruction following segmental central mandibulectomy and application of the system to the surgery could offer predictable and optimal outcomes.

Authors declare that there is no competing interest.

Copyright: © 2018 Miyashita H, et al. This is an open-access article distributed under the terms of the Creative Commons Attribution License, which permits unrestricted use, distribution, and reproduction in any medium, provided the original author and source are credited.