In this study antibodies against the fragment 254-274 from gp120 of human immunodeficiency virus (HIV) were produced in cats, rats and chicken that can be used as reagents in the preparation of diagnostic kits. Enzyme linked immunosorbent assay showed the presence of anti-HIVgp120 antibodies. Dot blot analysis was used as a separation technique and confirmed the results, proving its efficiency in the detection of proteins. This study also demonstrated that orally given antibodies to an animal as oral vaccine, initiated immune responses of the antibodies in the animals which may be useful for protection, antibody purification and development of reagents for immunodiagnostic procedures.

A dot blot is a technique in molecular biology used to detect biomolecules, and for detecting, analyzing, and identifying proteins. It represents a simplification of the Northern blot, Southern blot, or Western blot methods. The technique offers significant savings in time, as chromatography or gel electrophoresis, and the complex blotting procedures for the gel are not required. However, it offers no information on the size of the target biomolecule [1].

Production of anti-HIV antibodies in animals is a safe alternative in the development of reagents to be used in enzyme-linked immunosorbent assays (ELISA), western blotting and dot blots used to diagnose HIV infections in human [2]. The antibodies can be used unlabeled or labeled to enzymes and other molecules. It is an alternative to the use of human antibodies purified from the serum of HIV positive patients for the development of diagnostic kits. In the present work we produced antibodies in 3 animal species: cats, rats and chickens and we separated the antibodies by dot blot analysis using peroxidase-labeled HIV proteins conjugate as a probe. The purified antibody could be used in the diagnosis or as a new avenue of therapy for HIV+ patients.

Development of anti-HIV antibodies in chickens

Preparation of HIV immunogens: This study which was carried out at the Biochemistry laboratory of the University of the West Indies, Mona, Jamaica used a peptide fragment of gp120 from HIV-HIV gp120 (254-274): Cys-Thr-His-Gly-lle-Arg-Pro-Val-Val-Ser-Thr-Gln-Leu- Leu-Leu-Asn-Gly-Ser-Leu-Ala-Glu [3]; that was conjugated to keyhole limpet hemocynin (KLH) by the glutaraldehyde method as previously described in literature [4].

Chicken immunization with KLH-gp120 HIV fragment (254- 274): Two healthy layer chickens (brown Leghorn), aged approximately 6 months, were injected intramuscularly at multiple sites on the breast with the peptide-KLH conjugate and they were immunized on day 0, 15, 60 and so on as described previously [5]. The eggs were collected post-immunization to test for anti-HIV antibodies. The separation of chicken immunoglobulin-Y (IgY) from the egg yolk was performed by the method of Polson [6]. Briefly, the eggs were washed with warm water and the egg yolk was separated from the egg white. The membrane was broken and the egg yolk collected and diluted 1:3 in phosphate buffered saline (PBS), pH 7.4. To 1/3 of the egg yolk mixture an equal volume of chloroform was added, the mixture was then shaken and centrifuged for 30 min (1000×g) at room temperature (RT). The supernatant was decanted and mixed with PEG 6000 (12%, w/v), stirred and incubated for 30 min at RT. The mixture was then centrifuged as previously described. The precipitate containing IgY was dissolved in PBS (pH 7.4) at a volume equivalent to 1/6 of the original volume of the egg yolk and dialyzed against 1L of PBS (pH: 7.4 for 24 h at 4°C). The IgY was removed from the dialysis tubing. IgY concentration was determined by the Bradford method. IgY samples were stored at –20°C.

Development of anti-HIV antibodies in cats and rats

Anti-gp120 positive eggs were fed to adult cats, 2-3 years old (1 male and 4 female). Each cat received on average, of 2 eggs diluted in 5 volumes of soya milk weekly for 10 weeks. Whole egg was fed to rats (2-3 ml) by gastric intubation; weekly for 9 weeks and during the last week, they were fed daily. Serum from cats and rats were obtained after the feeding programme for determination of anti-HIV antibodies using method that had been previously described in literature [7].

The 96 well polystyrene microplates (U-shaped bottom) were coated with 50 ng of the synthetic gp-120 peptide in coating buffer overnight at 4°C. The microplates was washed 4X (PBS-Tween-20) and blocked (3% non-fat milk in PBS, 25 μl/well, 1h, RT). The microplates was washed 4X (PBS-Tween-20) and triplicates of 25 μl of IgY (1 mg/ml), 25 μl of sera from cats or rats diluted 1:16 in PBS-non fat milk were added. After incubation for 2 h at RT the microplates was washed 4X and 25 μl of a universal conjugate SpLAG-anti-IgY-HRP (comprised of peroxidase labelled-IgY chemically coupled to protein A, protein G and protein L) [7] diluted 1:1000 was added and incubated for a further 1 h at RT. Then, the microplats were washed 4X. After that 3,3’,5,5’-tetramethylbenzidine (Sigma Chemical Co., St Louis, MO, USA) solution (50 μl) was used. After a further incubation of 15 min in the dark, the reaction was stopped when positive controls were coloured and inspected for colour development in positive samples and no colour in negative samples. Positive controls were from a positive human serum for anti-HIV antibodies, negative controls were from a turtle serum (Sigma Chemical Co., St Louis, MO, USA) and blanks 0.9% normal saline solution.

Briefly, 2 μl of 1:2 dilutions of chicken IgY or 2 μl of serum from rats and cats were dotted onto nitrocellulose paper placed in a Bio- Dot SF apparatus (Bio-Rad Laboratories, Richmond, CA, USA). The membrane was blocked with 5 μL/well of fetal bovine serum with 1% Tris buffer saline. Then 5 μL of a commercial conjugate (peroxidaselabeled HIV proteins; Murex Diagnostics, Norcross, USA) was added and allowed to drain by gravity. Finally, 5 μL of the substrate 3,3’,5,5’-tetramethylbenzidine (Sigma Chemical Co., St Louis, MO, USA) was added and the mixture was incubated for 20 min. The reaction was stopped by washing the wells with distilled water under a vacuum. The membrane was left to dry for the final color visualization reading using previously described method [8].

The study was approved by the Ethics committee of the Faculty of Medical Sciences, The University of the West Indies, Mona, Jamaica.

The results of the study is depicted in table 1 that shows the ELISA giving a positive reaction for anti-HIV antibodies in samples from chickens, cats and rats as they all developed color reactions. And as illustrated in the Figure below, the results revealed that dot blot analyses were efficient and useful in detecting the proteins as they were separated during the process or reactions (Figure 1). 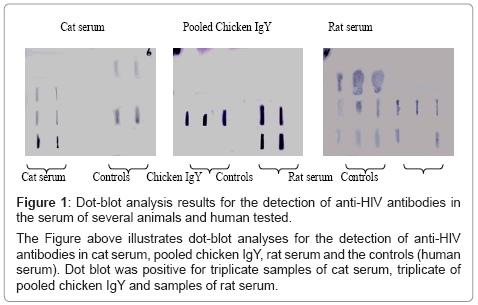 Figure 1: Dot-blot analysis results for the detection of anti-HIV antibodies in the serum of several animals and human tested.

Table 1: Enzyme-linked immunosorbent assay for detection of anti-HIVgp120
antibodies in specimens of chickens, cats and rats.

Dot blot analysis has been used in the selection and characterization of DNA aptamers (or DNA piece for hybridization) for use in detection of avian influenza virus H5N19 [9] and as diagnostic technique was used in a screening test for the detection of anti-HIV-1 IgA in young infants [9]. Frequently this technique is underutilized or is not frequently used because it cannot assess the molecular weight of macromolecules, but it is simple to perform and is useful when a particular biomolecule needs to be identified. In this study, dot blot analysis was used for detection of anti-HIV antibody, and it is available for determination or separation of any protein. It can be very useful in the immunodiagnosis of infectious diseases caused by viruses [10] and bacteria [1,11,12], in addition of determining specific DNA sequences by using probes [10].

Dot blot analysis proves effective in separating HIV anti-gp120 antibodies in several animal species including chickens, cats and rats. These antibodies can be used as reagents in the development of immunodiagnostic tests or as oral vaccines.

Copyright: © 2013 Justiz Vaillant AA, et al. This is an open-access article distributed under the terms of the Creative Commons Attribution License, which permits unrestricted use, distribution, and reproduction in any medium, provided the original author and source are credited.