Background: Trauma of the oral mucosa or nasal passages in pregnancy can lead to development of a pyogenic granuloma.

Methods: 34 year old female had progressive dyspnea starting at 25 weeks gestation. Initial work up pointed to asthma and nasal polyps which were removed. Decompensating respiratory status led to respiratory failure and intubation. Additional imaging showed a nasopharyngeal mass and it was confirmed to be pyogenic granuloma. Growth and location of the mass led to placement of a tracheostomy and ultimately early delivery of her twins.

Results: The mass underwent endoscopic resection three days after delivery with no complications and her respiratory status normalized.

Conclusion: Trauma to the nasal passages in the setting of pregnancy can lead to a rapidly growing pyogenic granuloma causing respiratory failure in the mother.

Pyogenic granulomas affect up to 5% of pregnancies, typically these lesions are not clinically significant and often are located in the gingiva [1,2]. Pyogenic granulomas are responsive to estrogen and progesterone and can grow rapidly throughout pregnancy [1]. Trauma has been cited as a cause to the development of these lesions and often they reach their maximum size after a few months [3,4]. Commonly pyogenic granulomas resolve after delivery. Management during pregnancy often is expectant unless the lesion is large or obstructive then surgical resection may be indicated.

A 34 year-old patient pregnant with twins presented to the Emergency Department (ED) at 25 weeks gestation with dyspnea, upper airway congestion and epistaxis for three weeks. Initial CBC and CMP showed no abnormalities. Pulmonary function tests identified an asthmatic pattern and she was subsequently treated with inhalers and oral steroids. Otolaryngology consultation during initial ED admission showed nasal polyps, which were removed in the ED, but no other abnormalities were found.

Progressive dyspnea worsened despite all treatments and at 26 weeks gestation she re-presented to the ED with severe retractions and use of accessory muscles. Chest X-ray was obtained and was normal. The patient had copious nasal and oral secretions requiring bedside suctioning. She had elevated blood pressures during her evaluation in the ED. CBC and CMP labs were normal. An otolaryngologist assessed the patient’s airway bedside in the ED and found no abnormalities. Oxygen saturation remained normal with values ranging between 97%-99%. Admission to the Intensive Care Unit (ICU) occurred due to worsening dyspnea despite nebulizer treatments.

Six hours after being transferred to the ICU, the patient had respiratory failure requiring an emergent difficult intubation. Maternal echocardiogram showed an ejection fraction of 55%-60%. CT scan of the head showed no abnormalities except for left ethmoid and maxillary sinus congestion and opacification (Figures 1 and 2). No further evaluation of her sinuses occurred during her ICU admission as the congestion was thought to be due to all her secretions. CT angiogram also showed no evidence of pulmonary embolus. Repeat chest x-ray showed concern for aspiration pneumonia likely due to the difficulty with intubation. Antibiotics were started and the patient remained ventilated for three days. In addition to antibiotics, fetal lung maturity steroids and magnesium sulfate for fetal neuroprotection were administered. While intubated, her blood pressure normalized. The patient was extubated successfully after three days and her breathing was dramatically improved. She was discharged three days after extubation. 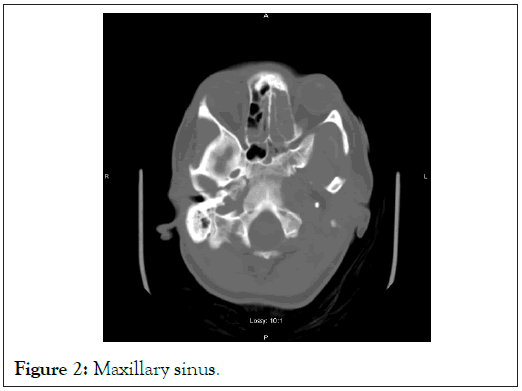 Over the next few weeks, progressive respiratory decompensation occurred. A hospital affiliated otolaryngologist second opinion was obtained and repeat CT imaging of her head confirmed a nasal mass was present which was leading to the sinus congestion identified on earlier imaging. The patient was instructed to continue her oral steroids and inhalers that were previously prescribed. At 30 weeks gestation, the patient represented to the ED with worsening dyspnea and the mass was able to be visualized posterior to the uvula on exam (Figure 3). Otolaryngology elected to place a tracheostomy to maintain the airway while they determined the etiology of this mass. During placement of the tracheostomy, biopsy of the mass was completed and confirmed the diagnosis of pyogenic granuloma. The previous removal of nasal polyps was thought to be the inciting event leading to the rapidly growing pyogenic granuloma. The patient was discharged home breathing normally with her tracheostomy in place. Removal of the mass was not completed due to concern for uncontrolled bleeding given the size and location of the lesion. At 31 weeks gestation, the patient was re-admitted with severe epistaxis and worsening dyspnea. Otolaryngology felt that the mass was growing rapidly due to the elevated estrogen and progesterone state of pregnancy and her copious secretions were obstructing her tracheostomy tube. Decision was made at 32 weeks to proceed cesarean section under general anesthesia. Prior to delivery, a rescue course of fetal lung maturity steroids was administered.

Three days after her cesarean, she underwent endoscopic removal of the nasopharyngeal pyogenic granuloma without any complication. The granuloma was 9.2 × 5.4 × 2.9 cm in its entirety and arose from the nasal passage in the location of the polyp removal. Immediately after the removal, she was able to breathe easier and her tracheostomy was capped the next day and removed the third post-operative day. The patient did well and recovered normally without any further respiratory issues.

While pyogenic granulomas are often clinically insignificant, there have been few case reports of large obstructing lesions leading to respiratory failure [5]. While the inciting event is not definitive, removal of the nasal polyps led to trauma and is the likely cause of the growth of this mass. Trauma in the setting of pregnancy is a reported cause for development of pyogenic granulomas [5]. Progesterone and estrogen stimulate angiogenic factors and inhibits apoptosis causing rapid growth of these lesions in pregnancy [5].

Recurrence rates of 16% are seen with oral pyogenic granulomas which is due to incomplete excision, failure to remove causing factors and additional trauma to the area.

However, Nasopharyngeal recurrence with appropriate surgical resection has not been identified in a small case series. In pregnancy, instrumentation and trauma to the airway can lead to development of a pyogenic granuloma that can have adverse effects on the respiratory status for the mother.

Trauma to the nasal passages in the setting of pregnancy can lead to a rapidly growing pyogenic granuloma causing respiratory failure in the mother.

Copyright: © 2022 Thomas MM, et al. This is an open access article distributed under the terms of the Creative Commons Attribution License, which permits unrestricted use, distribution, and reproduction in any medium, provided the original author and source are credited.