The Role of Psychosocial Factors in Children with Recurrent Abdominal Pain

The Role of Psychosocial Factors in Children with Recurrent Abdominal Pain

Recurrent abdominal pain (RAP) was defined by Apley and Naish as 3 or more bouts of pain, severe enough to affect activities, occurring over a period of not less than 3 months [1]. In some children the pain occurs daily, and in others it is episodic. Functional gastrointestinal disorders are defined as conditions in which a variable combination of chronic or recurrent gastrointestinal symptoms is present in the absence of any readily identifiable structural or biochemical abnormality [2]. Functional RAP are divided in to two groups; the first includes those in whom there is a pattern to the symptoms (e.g. irritable bowel syndrome, non-ulcer dyspepsia) and the second group includes those in whom no organic disease is demonstrable and in whom there is no recognizable pattern to the symptoms [3,4].

As long ago as the beginning of the last century, Moro [5] stated the most cases of RAP had a psychogenic origin. This was also the conclusion of Apley in the 1950s [6], and other more recent studies [7,8]. However, psychometric testing in recent decades has not given conclusive results concerning a relation between RAP and psychopathological parameters [9].

The aim of this study was to explore psychosocial factors in children with RAP and to compare their expression with a control group of healthy children.

Subjects who had normal laboratory tests were further investigated for psychosocial factors. For this reason a special questionnaire was created by our psychology pediatric department.

The questionnaire consisted of two parts: in the 1st part (Table 1) emphasis was given to environmental and social causative factors, in the 2nd part of the questionnaire (Table 2) psychological factors which could affect the child were investigated (anxiety, depression (dysthymia, attitude derangement), and behavior).

Table 1: Part 1 of the questionnaire-environmental and social factors.

Table 2: Part 2 of the questionnaire-Psychological factors.

Patients were interviewed with their parents, to help give more reliable answers. In the questionnaire frequency of school absenteeism, family movement, stressful live events and economic or social difficulties in the family were registered.

The second part of the questionnaire comprised 3 clinical scales, totalling 35 items. The clinical scales are: Depression scale (D), Anxiety scale (ANX), and Behavior scale (BEH). Sixteen items referred to depression indicative factors (dysthymia, attitude derangement), 6 items to anxiety and 13 items referred to behavior. The questionnaire was answered by one of the patient-parents, preferably by the mother and was completed two times for each child from a different investigator and in a different time. The mean of the score was recorded for each question. In the case, which the answer was strongly or weakly positive, the item scored with 1 point and if negative answer was given the item scored with null points. The 131 control subjects and their parents also answered the same questionnaire.

Mean values ± SD are given if not otherwise stated. Chi squared test was used for proportions comparison between the various subgroups. P<0.05 was chosen as the level of statistical significance. All statistic calculations and graphic designs were performed using commercially available software (Graph Pad Software Inc., San Diego, CA, USA).

Underlying organic conditions were found in 28 children (26.4%) (Table 3). Seventy-eight children had no evidence of organic cause of their problem and were eligible for the study.

Table 4: Socioeconomic factors in children with RAP- correlation with controls. 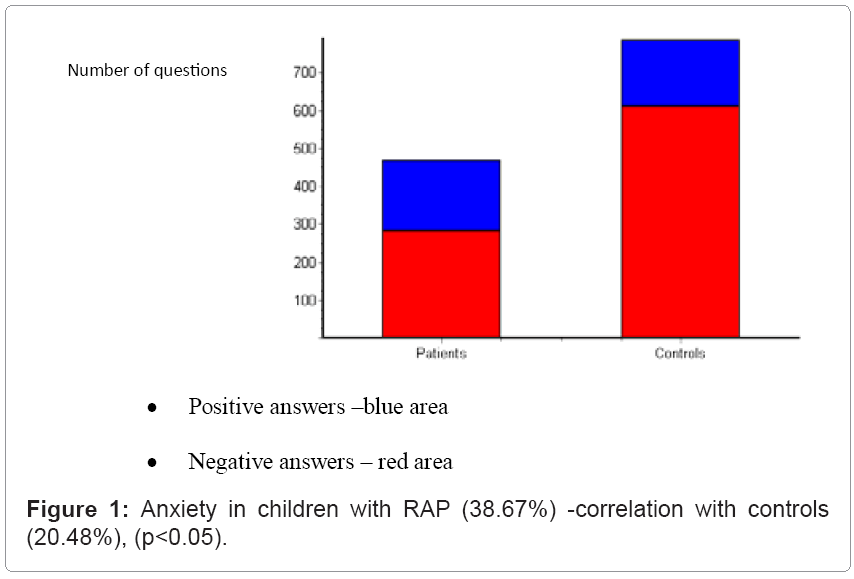 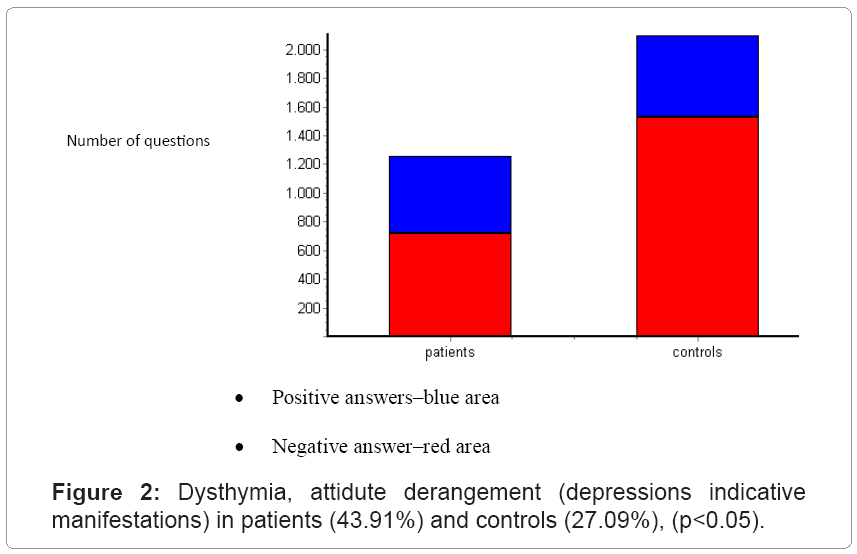 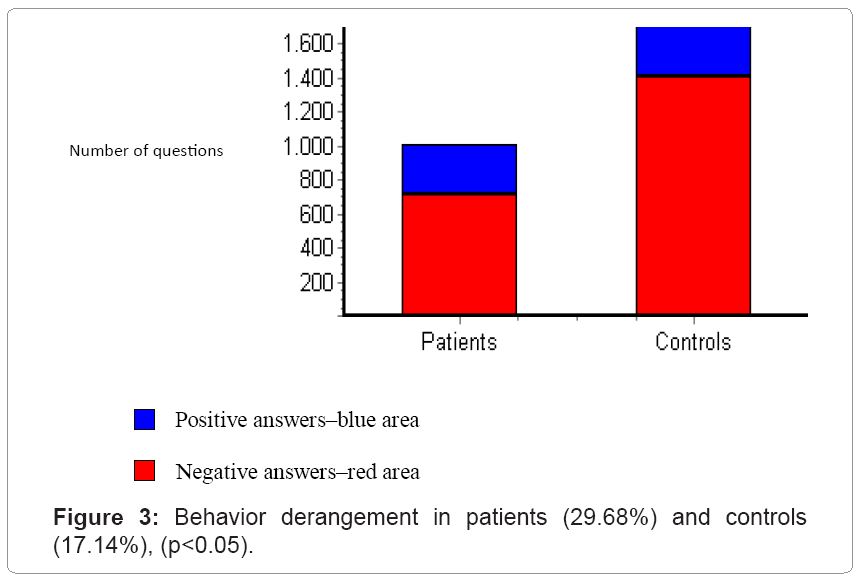 Psychosomatic disorders are typically defined as these in which psychological factors are thought to contribute significantly to the development, exacerbation or maintenance of the illness [10]. A number of investigations have found a significant association between stressful life events and somatic symptoms in adolescents [11]. Other studies have found that higher stress predicted symptom maintenance in adolescent patients with recurrent abdominal pain [12-16]. Olafsdottir et al. investigated 25 consecutive children with RAP [17]; ten children (40%) were harassed at school and 12 (48%) were frequently absent from school because of pain. Ten children (40%) had moved with their families to another location within the past 5 years and seven children (28%) had experienced severe disease or social and economic difficulties in the family.

In our study school absenteeism was seen in 25.6 %. Five percent of children had moved with their families to another location in the past 3 years in compared with 1.5% of controls (p<0.05). Similarly, severe family economic problems were more common in children with RAP compared with control subjects (30.8% vs 17.6%). On the other hand, frequency adverse factors such as parent’s education, family member with severe health problem and single parent families, were similar in both groups.

Various studies refer to anxiety as an important factor for symptom expression in RAP [18,19]. It is known that adults with functional dyspepsia have higher levels of state-trait anxiety, depression and neuroticism than patients with duodenal ulcers and healthy controls [20]. Olafsdottir et al, [17] compared psychological factors in a group of 25 children (aged 7-13 y) with RAP without organic disease, with a control group. A tendency for high scores, but within the normal range, was found for depression, anxiety and withdrawal in the RAP group compared with the Personality Inventory for Children.

Stordal et al. [16] who studied 44 children with RAP, referred that parents of the children completed a Child Behavior Checklist for externalizing and internalizing behavior problems. The total scores were in the normal limits for 89% of the children.

It is remarkable that they showed organic abnormalities in 20 out of 44 children with RAP.

In our study we found organic abnormalities in 28 out of 106 children with RAP.

Our study shows that psychological factors are more frequent in children with RAP and this is in accordance with similar studies in adult population with functional dyspepsia [20]. The above two studies in children with RAP [16,17], failed to show a strong relation between RAP and psychological factors. This could be attributed to the fact that the first one had a relative small size of study population and the second also included children with non-functional RAP.

Overall, we conclude that factors such family movement, lower family socioeconomic status, family economic problems and psychological factors are associated with symptoms expression in children with functional RAP. More studies are necessary in the future to confirm these findings.

Copyright: © 2013 Ioannis X, et al. This is an open-access article distributed under the terms of the Creative Commons Attribution License, which permits unrestricted use, distribution, and reproduction in any medium, provided the original author and source are credited.