Puberty is a process of physical maturation, which is related to the appearance of secondary sexual characteristics and the ability of reproduction. Puberty usually begins between 8-14 years of age in females [1]. Many factors may contribute to the onset of puberty such as race, dietary intake, and environmental factors [1]. To the extent of our knowledge, as no local data in Saudi Arabia is addressing this matter, we conducted this study to investigate the racial differences in onset of pubertal developmental age among Saudi and non-Saudi young females living in the same environment in Jeddah, Saudi-Arabia.

The participants were recruited randomly from people in a campaign made at some shopping malls in Jeddah, Saudi Arabia and was made by the medical students. The Inclusion criteria for Saudi females were the Saudi-born females belonging to Arab families. The non-Saudi included both, the Saudi-born immigrants as well as those who arrived in Saudi Arabia from another country but were not born in Saudi Arabia.

A cross-sectional questionnaire-based study design was used. A set of standardized data collection sheets entailing a series of questions with multiple answer choices were utilized. The study population comprised of random young females between the age six and fourteen years old.

The participants were recruited randomly from people in a campaign at some shopping malls in Jeddah, Saudi Arabia and were made by the medical students. The questionnaires were collected over the course of one month (July, 2014). They were filled in by the participants. The inquiries made pertained to the age of menarche, exposure to xenoestrogen products, adequacy of the nutrition, history of early puberty in the family and awareness. For the purpose of this research, the segments involving Saudi and non-Saudi young females aged between (6-14 years). During the physical examination, the phases of pubic hair and breast development were identified by participants according to Tanners stages. Young females with important data insufficiency due to incomplete questionnaires were excluded. Verbal and written approvals from females and their parents were obtained prior to filling the questionnaires.

Table 1: The mean age of (breast development, an appearance of pubic hair and menarche) among each group of Saudi and Non-Saudi young females. 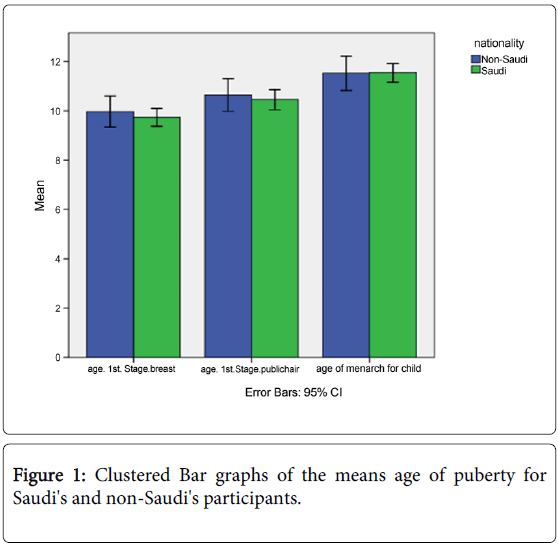 Figure 1: Clustered Bar graphs of the means age of puberty for Saudi's and non-Saudi's participants.

As the early puberty became common phenomena all over the world, young females are getting into their puberty earlier as compared to females of previous time and the age in which changes of puberty happen has decreased [2]. Additionally, to worldwide decrease in age of puberty over the time, researches in the USA have observed a specific pattern in certain population, such as African-American females who have developed their puberty earlier than other races living in the same environment [3]. The age of pubertal development in black females among non-Hispanic populations is considerably earlier as compared to the white females among the non-Hispanic population in the USA [4-8].

In the present study; there was no significant difference determined by pubertal developmental age among Saudi and non-Saudi young females living in the same environment in Jeddah, Saudi-Arabia. Similar findings also showed that females who are African-American have developed their puberty 1 to 1.5 years earlier as compared to the white females. This research displayed that, menarche’s mean ages for African-American and white females were 12 years and 13 years respectively, and the mean ages of beginning of development of pubic hair for white and African American females were 10.5 years and 9 years respectively [10]. As of our population that was composed of white skinned only with no black skinned, we have no differences in the age of development of each of the pubertal signs. As mentioned previously, the females in African American population tend to enter into puberty earlier as compared to white females although both are living in the same environment in the USA.

In comparison a cross-sectional study conducted in Netherlands, reported that the median age of first menstruation of female was 13.66 years in the year 1955, 13.40 years in the year 1965, 13.28 years in the year 1980, and 13.15 years in the year 1997 [11]. In comparison that we have similar findings in our population regarding the decline in the age at which puberty starts. On the other hand, another study is conducted in Denmark addressing the influence of place of origin of genetic factors which showed that the foreign kids originating from areas except Korea had fifteen to twenty times enhanced danger of early puberty than Danish-born kids "original” [12]. An Italian study reported seventeen females with early pubertal signs in relation to synthetic estrogen (mycoestrogen zearalenone), six out of them were found to have elevated levels of this product with no significant effect on early puberty, but they suggested other environmental factors such as herbicides and pesticides [11]. Moreover, many studies showed the relation between phthalates and early signs of puberty. One study was done in the US on 1151 females aged six to eight years exposed to phthalates and phenols; it showed a notable increase in the breast and pubic hair development [12]. Another study in China reported that females with early puberty had higher serum DEHP levels than females with an onset of pubertal signs at normal age [13]. In a Danish study, in females who live in the greenhouse as compared to the normal population, there was a significant relationship between early breast development and pesticides usage [14].

The presence study has revealed that there is no significant differences between pubertal developmental age among Saudi and non-Saudi young females living in Jeddah, Saudi-Arabia. We recommend more research work to be conducted in other regions of the country.

The authors are grateful for the essential cooperation and the major work that have been done by the statistical analyst Mrs. Ghiras Jamil Softah. We sincerely appreciate her patience and efforts, since this study would not have been possible without her amazing job. We would like to express our gratitude to the Family Physician Prof. Fathi Al-Jamal-head of the family department at Ibn Sena National Collage for his valued revision and assessment of our statistical analysis in this study. The authors are further appreciative to all of the young female participants and medical students, who volunteered for filling up the questionnaires in this investigational project.

Copyright: © 2015 Al-Agha AE, et al. This is an open-access article distributed under the terms of the Creative Commons Attribution License, which permits unrestricted use, distribution, and reproduction in any medium, provided the original author and source are credited.