MR Findings of Exercise-Induced Rhabdomyolysis: A Case of 14-Year-Old Boy

MR Findings of Exercise-Induced Rhabdomyolysis: A Case of 14-Year-Old Boy

We experienced a 14-year-old boy case of exercise-induced rhabdomyolysis presumably complicated by heatrelated illness and obtained MR findings on the onset and healing period of the disease. On MR imaging, inner muscles of thigh revealed high signal on T2 weighted images. MR findings can help to specify affected lesions and MR imaging is considerable examination.

A well-nourished 14-year-old boy presenting upper leg pain after training basketball was transported to our pediatric emergency department. The room temperature was up to more 35 degrees centigrade in this day. On arrival at the hospital, his consciousness was clear but he could not walk by himself because of pain. His body temperature was 36.7 degrees centigrade. He complained of pain in the bilateral thigh, but those were normal by appearance without swelling and redness. On examination, although his sensory of upper and lower limbs were intact, and motion of ankle joints were as usual, he could barely move his knees because of the pain.

The laboratory data were as follows : creatinin kinase 10,491 IU/L, asparate transaminase 236 IU/L, lactate dehydrogenase 448 IU/L, white blood cells 14,8200 /μL ; and electrocytes were normal, acidemia was not presented. His first urination was coke-like color and urinary occult blood reaction was three plus, but red blood cells were not detected on the sedimentation. The protein of urine reaction was 2 plus. We diagnosed him as rhabdomyolysis and he was admitted to our hospital for the purpose of hydration therapy to prevent progression to the renal failure.

The next day, creatinin kinase level was elevated up to 29,302 U/L and aldorase revealed 995 U/L so as asuparate transferase up to 1,401 IU/L. The reaction test for occult blood of urine was negative. On MR imaging, inner muscles of thigh revealed high signal on T2 weighted images (Figure 1). The value of creatinin kinase was getting lower. The value of alanine aminotransferase was up to 541 IU/L on 4th day after admission, reflected by heat related illness, but its value was gradually dropped so as creatinin kinase and asparate transferase. His pain was gradually reduced and regained normal gait. He had not fallen into renal failure. He was discharged from our hospital on 9th day after admission. 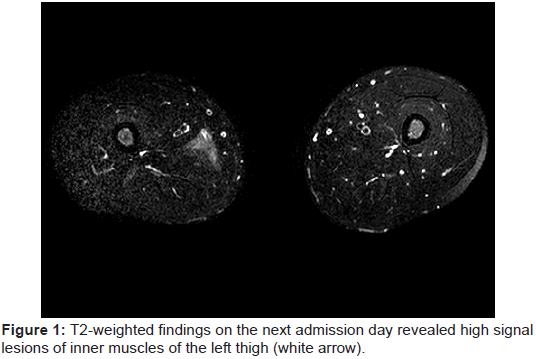 Figure 2: T2-weighted findings revealed previous high signal disappeared and were normalized to isointence on 22 days after the onset.

It has been described that rhabdomyolysis is a complication of heat-related illness. And exercise-induced rhabdomyolysis including adolescent has been previously reported [1-9]. Those were induced by strenuous activities as military basic training, weight lifting, and marathon running and football practice.

Rhabdomyolysis is defined as an injury to the skeletal muscle resulting in myolysis with subsequent leakage of intracellular contents such as myoglobulin, potassium, creatinin phpsphokinase, aldorase, lactate dehydrogenase, into the plasma. The presentation of rhabdomyosis is characterized by the triad of myalgias, muscle weakness and darkened urine. Patient with rhabdomyolysis are at risk factor for developing into acute renal failure and are associated with abnormalities of metabolic acidosis, hyperphosphatemia and hyperkalemia. Large amount of intravascular hydration is needed to prevent acute renal failure. Intravenous saline restores intravascular volume and induces solute diuresis. Acute renal failure could be prevented by large amount of infusion in this case.

Lu et al. [12] described recently that rhabdomyosis is a clinical and biochemical syndrome comprising of 2 distinct imaging. Homogeneous signal changes and enhancement in the affected muscles advocate type 1 rhabdomyolysis. The affected muscles revealed homogeneously isointense to hyperintense on T1-weighted, homogeneously on T2-weighted and short-tau inversion recovery (STIR) images, and homogenously enhanced on contrast-enhanced MR images. The “stipple sign” is useful in demonstrating the area of myonecrosis in type 2 rhabdomyolysis. The affected muscles revealed homogeneously or heterogeneously isointesity to hyperintensity on T1-weighted images, heterogeneously hyperintesity on T2-weighted and STIR images, heterogeneously hypodensity on CT images, and rim enhanced on contrast-enhanced MR and CT images with the presence of a specific presentation, named as “stipple sign”. In our case, type 1 rhabdomyolysis was suggested because of MR findings and clinical course, although neither contrast-enhanced MR nor CT was demonstrated

Shintani et al. described that repeat MR studies of rhabdomyolysis resolved in parallel with the improvement of the clinical course [13]. They suggested that this reversibility of the MR findings suggests the high intensity lesions did not reflect permanent myopathic changes, but probably represent transient edema in acute phase of rhabdomyolysis. They reported that MRI images on 15 to 33 days after initial study were normalized as the value of creatinin kinase was decreased. The value of creatinin kinase was normalized on 15th day after onset and repeat MR findings on 22th day revealed normal intensity in our case.

Pediatricians may experience the case of exercise-induced rhabdomyolysis with or without complication of heat-related illness. Many cases can be diagnosed by clinical history, physical examination and laboratory data. However, MR findings can help to specify affected lesions and MR imaging is considerable examination. Further more, new classification of MR findings of rhabdmyolysis was adovocated, MR findings may play a role of the consideration of pathogenesis.

Copyright: © 2012 Isozaki A, et al. This is an open-access article distributed under the terms of the Creative Commons Attribution License, which permits unrestricted use, distribution, and reproduction in any medium, provided the original author and source are credited.