Acral fibrokeratoma is a rare benign fibrous tumor of an unknown etiology, typically found at the distal end of the toes. A detailed clinical examination is necessary in order to investigate signs of tuberous sclerosis. It presents the only clinically obvious anomaly. We report a patient with a typical presentation of fibrokeratoma.

Fibrokeratoma is a benign solitay tumor that develops in adults on on acral areas such as toes and fingers. Fibrokeratoma is usually asymptomatic, and is clinically presented as a flesh-colored papule or nodule dome-shaped, with a characteristic collarette [1,2]. We report an interesting case of fibrokeratoma on a toe causing a longitudinal depression of the nail.

Mrs. HB, 40 years old, a hair dresser, is followed for rheumatoid arthritis under anti-inflammatories. For 4 years, she has presented a painful and unsightly swelling of the nail of the right big toe. The rest of the examination does not reveal any hypopigmented macules, angiofibromas, shrinking neurological disorders, tuberous sclerosis or neurofibromatosis. Several diagnosis were referred to such as a glomus tumor, mucoid cyst, neurofibroma and acral fibrokeratoma. Radiography of the foot is normal. Skin biopsy shows a finger-fibroepithelial lesion with collagenous stroma containing fibroblasts arranged in parallel to the axis of the lesion and ectatic vessels, which is in favor of an acquired acral fibrokeratoma (Figure 3). 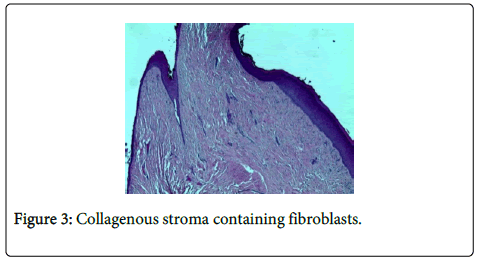 The diagnosis of acral fibrokeratoma was selected. Complete excision was achieved without recurrence with a decline of 3 years.

The acral fibrokeratoma is a rare benign tumor of fibrous tissue that is isolated as described by Bart in 1968. The most accepted hypothesis is the trauma suggested by the acral localization. There is no publication about Acquired digital fibrokeratoma with Rheumatoid arthritis yet. However, we hypothesize that the fibrokeratoma may have a relation with rheumatoid arthritis. Clinically, these are lesions of 3 to 5 mm, a glove finger, which arises at the above nail fold, or at puberty and again later partially overlapping the nail plate [1].

They are rarely large to the extent that they can destroy the nail. Sometimes they can be pedicled and the surface may appear warty. Koenen tumors is a type of digital fibrokeratomas occuring in tuberous sclerosis [1,2]. Koenen's tumors are peri-ungual or subungual fibromas reddish flesh-colored, smooth, soft-type of papules and nodules leaving folds farms. They represent one of the major criteria Gomez edited by Osborne [2]. Typically multiple, they may be the only obvious clinical abnormality of tuberous sclerosis. Several diagnoses can be mentioned for epidermoid cyst, endochondrome , neurofibroma and foreign body granuloma.

Histology will highlight a collagen protrusion covered by a hyperkeratotic skin. In our case this growth did not fall within the framework of a tuberous sclerosis. The occurrence of tumor can be explained by rheumatoid arthritis in addition of wearing tight shoes worsened by prolonged standing at work. The treatment of choice is the complete excision because local recurrence after partial excision or curettage may occur [3,4]. The incisions were made along the borders of the tumor and also in proximal nail fold, then can be lifted to expose the lesion. In order not to damage the matrix, the tumor should be excised carefully, which can cause permanent nail dystrophy [5].

Copyright: © 2015 Abdou A. This is an open-access article distributed under the terms of the Creative Commons Attribution License, which permits unrestricted use, distribution, and reproduction in any medium, provided the original author and source are credited.