Fentanyl is a widely used opioid analgesic in the intensive care unit. In critically ill neonates, continuously infused fentanyl is part of the standard treatment regimen for sedation and pain control. Little is known about fentanyl pharmacokinetics in specific clinical indications, as in asphyxiated neonates with therapeutic hypothermia treatment. In this report, we introduce a liquid chromatography-tandem mass spectrometry method (LC-MS/MS-method) to determine concentrations of fentanyl and its major metabolite norfentanyl in critically ill newborns. 100 μl serum samples were precipitated with acetonitrile containing the isotopically labeled internal standard fentanyl-D5. The supernatant was evaporated to dryness and reconstituted with mobile phase. Chromatographic separation was achieved on a C18 column with a gradient flow. LC-MS/MS detection was performed using a triple-stage quadrupole mass spectrometer working in selected reaction monitoring mode with positive electrospray ionization. Linearity was demonstrated over the concentration range of 0.1 to 40 and 39.4 ng/ml for fentanyl and norfentanyl respectively. Inter- and intraday accuracies and precisions were within the acceptance ranges. The lower limit of quantification was 0.02 and 0.09 ng/ml for fentanyl and norfentanyl. The method was successfully applied to newborns with hypoxic-ischemic encephalopathy treated with whole body hypothermia, which allowed accurate determination of fentanyl and norfentanyl concentrations as a basis for pharmacokinetic analysis.

Fentanyl is a synthetic μ-opioid receptor agonist that is 75 to 100- fold more potent than morphine [1]. It is well established in clinical practice as an opioid analgesic providing pain relief with favorable characteristics such as lack of active metabolites, a rapid onset, and a short duration of action [2,3]. Fentanyl is also suitable for application in trauma, cardiac, or intensive care unit patients as it was shown to have beneficial hemodynamic effects [4]. Following intravenous administration, systemic clearance occurs primarily in the liver by the cytochrome P450 isoform CYP3A4. It is mainly degraded to norfentanyl by N-dealkylation and excreted in the urine [5,6].

Neonatal therapeutic hypothermia is a medical treatment to reduce body temperature to 33.5°C-34.5°C for 72 hr [7]. It has emerged as standard treatment in perinatal hypoxic-ischemic encephalopathy (HIE) which is usually secondary to perinatal asphyxia [8,9]. The neuroprotective effects of mild hypothermia are complex and may not only be explained by a reduction in brain metabolic rate [10]. Asphyxiated neonates should receive a sedative and opioid analgesic to reduce intensive care treatment related distress and pain as these factors can counteract the neuroprotective effects of hypothermia treatment [11].

Little is known about fentanyl blood concentrations and pharmacokinetics in asphyxiated neonates with hypothermia treatment. In clinical practice, fentanyl medication used in newborns are derived from recommended dosages in adults and adjusted to body weight [12]. However, it is well known that pharmacokinetics in newborns differ considerably when compared to adults [13]. A deeper understanding of fentanyl pharmacokinetics in critically ill neonates may guide optimization of dose regimens in this patient group. This study describes the development of a liquid chromatography coupled to tandem mass spectrometry (LC-MS/MS) method for determination of fentanyl and its major metabolite norfentanyl in serum of critically ill newborns.

Fentanyl, norfentanyl HCL and a deuterated fentanyl isotope (fentanyl-D5) were obtained from Lipomed (Weil am Rhein, Germany) and stored at ϑ=-18 °C. Solvents used for sample preparation and mobile phase were of analytical or high-performance liquid-chromatography grade. Acetonitrile and formic acid were obtained from Merck (Darmstadt, Germany) and methanol from Roth (Karlsruhe, Germany). The mobile phase consisted of solvent A acetonitrile and solvent B 0.1% formic acid. Deionized water was purified by a Milli-Q Plus ultra pure water system (Millipore Corporation, Bedford, MA, USA).

100 μl calibration standard or quality control sample were extracted with 200 μl acetonitrile containing 5 ng/ml internal standard fentanyl-D5. After vortexing, the mixture was centrifuged at 8°C and 15.000 g for 15 min. The clear supernatant was transferred into micro tubes (Sarstedt, Nümbrecht, Germany) and evaporated to dryness in an evaporation concentrator (RC10.22, Thermo Electron, Waltham, MA, USA) at 40°C for 60 min. The samples were reconstituted with 55 μl mobile phase (formic acid 0.1% and acetonitrile, 50:50, v/v). Subsequently, the mixture was vortexed for 25 s and centrifuged at identical conditions. The supernatant was transferred to LC-MS glass vials (Macherey-Nagel, Düren, Germany) and then subjected to LCMS/ MS analysis.

The validation of the method was based on the International Conference of Harmonization (ICH) guideline Q2 (R1) “Validation of Analytical Procedures” (ICH harmonised Tripartite Guideline, n.d.) [14].

Linearity, accuracy, precision: Six calibration standards were analyzed and the ratio of the peak areas for fentanyl and norfentanyl to the internal standard fentanyl-D5 plotted versus the concentration of fentanyl and norfentanyl (x-axis). Standard curves were generated by least-squares linear regression analysis with a weighing factor of 1/x2. QC samples contained analytes in low, midrange, and high concentrations (QC1-QC3). Accuracy (bias, %) was calculated as the deviation between measured and the nominal concentration. Precision was expressed as percent relative standard deviation (RSD) evaluated as the standard deviation (SD) of the observed concentration divided by the mean concentration. Intraday variability was determined by repeated analyzing of six individually extracted QC1-QC3 samples at one day (ntotal=18). The interday variability was calculated by measuring QC1-QC3 samples on eight different days during a three week period (ntotal=24).

Limit of detection and quantification: The limits of detection (LOD) and lower limits of quantification (LLOQ) were derived from interday assay data (ntotal= 24). These limits were calculated using the equations LOD= (3.3σ)/S’ and LLOQ= (10σ)/S’, where σ is the standard deviation of the blank response and S’ is the slope of the calibration curve.

Recovery: Three working solutions were prepared in blank serum units resulting in concentrations of 1, 10, and 40 ng/ml for fentanyl and norfentanyl. Samples were processed and analyzed as described in sections 2.4-2.6. Blank serum was precipitated with acetonitrile (1:2), then vortexed for 25 s and centrifuged for 15 min. New working solutions were prepared with the supernatant of the precipitated serum resulting in the same concentrations. These samples were directly submitted to LC-MS/MS analysis. Recoveries were determined as quotients of the areas of extracted samples to reference samples.

Ion suppression: Ion suppression experiments were investigated by means of a continuous post column infusion (flow rate 20 μl/min) of mobile phase containing the analytes with a concentration of 154 ng/ml. The solvent flow rate was 300 μl/min. During the infusion, blank serum samples were subjected to LC-MS/MS analysis using chromatographic conditions as described in section 2.5. The responses of fentanyl and norfentanyl were examined for possible matrix effects.

The method was applied to a male newborn patient (gestational age 40+2 (week+day), birth weight 3.4 kg) with hypoxic ischemic encephalopathy due to meconium aspiration. Apgar scores were 3/4/3. The initial umbilical cord pH and base excess (BE) at birth were 7.1 and -4.5 mmol/l, the lowest pH and base excess determined within the first hour were 6.65 and -25.6 mmol/l, respectively. Initial lactate concentration was 17.8 mmol/l. Blood samples for the determination of fentanyl and norfentanyl concentrations were obtained from an indwelling arterial catheter and collected during the course of hypothermia treatment (0-72 hr) and during the elimination phase after discontinuation of fentanyl administration. The mean body temperature during hypothermia treatment was 34.7°C Approval by the local ethics committee and written informed consent by the children’s parents were obtained prior to sample collection. 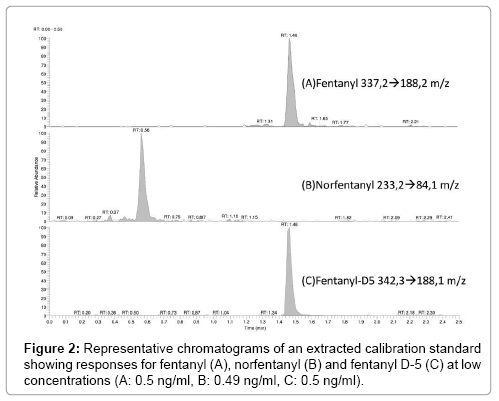 Figure 2: Representative chromatograms of an extracted calibration standard showing responses for fentanyl (A), norfentanyl (B) and fentanyl D-5 (C) at low concentrations (A: 0.5 ng/ml, B: 0.49 ng/ml, C: 0.5 ng/ml). 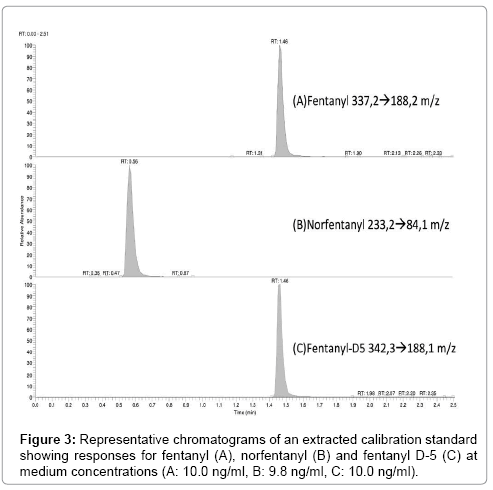 Figure 3: Representative chromatograms of an extracted calibration standard showing responses for fentanyl (A), norfentanyl (B) and fentanyl D-5 (C) at medium concentrations (A: 10.0 ng/ml, B: 9.8 ng/ml, C: 10.0 ng/ml).

Limit of detection and quantification

The calculated lower limits of quantification (LLOQ) for fentanyl and norfentanyl were 0.02 and 0.09 ng/ml and the calculated limits of detection (LOD) were 0.01 and 0.03 ng/ml respectively (Table 3).

Extraction recovery after protein precipitation with acetonitrile, evaporation and reconstitution was 44.4% for fentanyl and 82.1% for norfentanyl (Table 3).

The post-column infusion experiments confirmed potential ion suppression effects for fentanyl, norfentanyl, and fentanyl-D5; however with maximum effect at 0.44 min (Figure 4). Based on the fentanyl and norfentanyl peak responses of extracted concomitant drug containing and control serum samples, no mass-spectrometric interferences were observed - except for dobutamine containing samples. Serum samples spiked with dobutamine exhibited 35% lower peak responses for norfentanyl compared to control serum samples. No chromatographic interferences were detected. 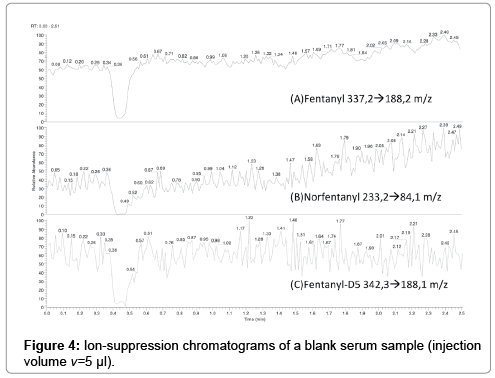 The method was successfully applied to serum samples of a newborn with hypoxic ischemic encephalopathy (HIE) with therapeutic hypothermia treatment (Figure 5). Fentanyl was continuously administered at dosages ranging from 2 to 8 μg/kg/h. Liver enzymes (ASAT 49 IU/l, ALAT 19 IU/l) and creatinine (0.79 mg/dl) remained within normal limits during hypothermia treatment. Fentanyl and norfentanyl serum concentrations ranged from 0.41 to 2.77 ng/ml and 0.41 to 0.78 ng/ml. Based on a 2-compartment model, the derived fentanyl terminal elimination half-life t1/2 was 339.6 min (MW/Pharm, version 3.50., MediWare, Groningen, the Netherlands). 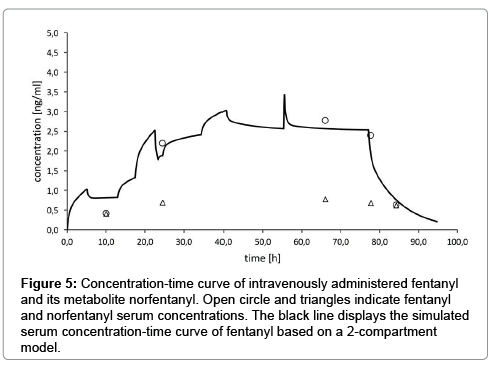 Previously, various approaches for the determination of fentanyl in human serum have been described including high-performance liquid chromatography (HPLC) [22], LC-MS/MS [1,2,23-26], gas chromatography-mass spectrometry (GC-MS) methods [27,28], and radio immunoassays [29-31]. Apart from human serum, fentanyl concentrations have been analyzed in different biological matrices including plasma, whole blood, and dried blood spots [32], urine [2,20], or hair [33,34]. Few articles deal with the analysis of fentanyl in blood samples of neonates [32].

In critically ill neonates, especially those with low birth weight, blood loss due to laboratory testing is the primary cause of anaemia [35]. To limit blood overdraw, tubes with fill-lines or micro blood sampling systems have been developed for laboratory analysis [35,36]. Sample volumes between 500 and 3600 μl have been employed for determination of fentanyl concentrations in different studies [1,2,22- 26,37]. The present work describes the development of a very sensitive

LC-MS/MS method for the analysis of fentanyl and norfentanyl in serum of neonates using a sample volume of 100 μl. Using this method, fentanyl and norfentanyl in concentrations of 0.1-40 ng/ ml could be determined (Table 1). These concentration ranges are also covered in other studies; however, higher sample volumes were used [2,23-25,38]. The LLOQ for fentanyl was determined at 0.02 ng/ml (Table 3) and far below the LLOQ reported in other studies [1,2,21,22,25,26,32]. Lennernäs et al. reported the same LLOQ, but with a 10 fold higher sample volume (24). In the literature, run times vary from Rt=2.5-35 min and mobile phase flow rates are up to 1000 μl/ min [1,2,21,23,25,26,32]. Hence, with a run time of Rt=2.5 min and a flow rate of 320 μl/min, the new method offers an economic and time advantage. The method is highly sensitive for fentanyl determination, enabling detection of minuscule serum concentrations using low sample volumes. The relatively low recovery of fentanyl did not impact its accurate quantitation. A focus was rather put on the optimization of the norfentanyl recovery to assure precise quantification of low metabolite concentrations (Table 3).

In mass spectrometry, matrix effects are considered to affect quantitative assays by suppressing or enhancing ionization potential [39]. Thus, isotopically labeled internal standards that can compensate for these effects are recognized as gold-standard in quantitative LCMS/ MS. In the present study, fentanyl-D5 was used for quantification of both fentanyl and norfentanyl. Matrix effects potentially affecting norfentanyl quantification were examined by means of an ion suppression experiment (Figure 4), and the influence of comedications on the ionization potential was assessed. The maximum ion suppression dip occurred prior to the maximum norfentanyl peak; however, after addition of dobutamine to the matrix, peak responses for norfentanyl were found 35% lower compared to control. In patients with co-administration of dobutamine, it is therefore advisable to employ a separate isotopically labeled norfentanyl molecule as internal standard.

Clinical applicability was shown in a newborn patient with HIE (Figure 5). Fentanyl concentrations were fitted to a 2-compartment model and the derived fentanyl terminal elimination half-life was t1/2=339.6 min. This is in line with previous studies where fentanyl halflifes between 87 and 407 minutes were reported [4,40-42].

In summary, the presented work provides a highly sensitive LC-MS/ MS method with minimal sample volume for the analysis of fentanyl and norfentanyl concentrations in critically ill neonates suitable for pharmacokinetic studies in these vulnerable patients.

Copyright: ©2015 Linnerz K, et al. This is an open-access article distributed under the terms of the Creative Commons Attribution License, which permits unrestricted use, distribution, and reproduction in any medium, provided the original author and source are credited.
Top