Butylatedhydroxytoluene (BHT) is a crystalline stable solid, but it is light-sensitive and reactive to acid chlorides, acid anhydrides, and oxidizing agents. BHT is used as an antioxidant in many products including food, pharmaceuticals, rubbers, paint, and petroleum products [1]. Its antioxidant mechanism was well studied and divided into two steps. In the first step, it forms a stable phenoxyl radical, which further forms the parent and a quinone methide (QM) [2]. QM is a reactive electrophilic species that easily forms adducts with nucleophiles or polymerize in the next step. Adduct formation between the nucleophilic groups of the active pharmaceutical ingredients with QM in pharmaceutical formulations is very much possible [3]. In food preservation, BHT reacts with atmospheric oxygen preferentially rather than oxidizing food materials, thereby protecting them from decomposition. It is used to preserve food odor, color, and flavor [1].

4-methoxyphenol (4-MP) is a common active pharmaceutical ingredient in topical drugs used for skin depigmentation. 4-hydroxyanisole and the retinoid tretinoin have been used individually as depigmenting agents. 4-MP is often mixed with tretinoin, a topical retinoid [4]. A common formulation for this drug is an ethanolic solution of 2% 4-MP and 0.01% tretinoin by mass. BHA is a commercial mixture of mono- and di-tert-butylated products of 4-MP, which is an effective anti-oxidant with maximum carry-through protection used in foodstuffs [5] and pharmaceuticals [6]. Many polymerization inhibitors (e.g., phenols) work best in the presence of oxygen because they intercept peroxyl radicals and decelerate oxygen consumption while stopping chain propagation. 4-MP is an inhibitor of this type. 4-MP has tremendous ability to quench peroxyl radicals and alkyl radicals via hydrogen abstraction mechanism, which leads to the formation of a phenoxyl radical [7,8]. The phenoxyl radical is less reactive because it is stabilized by the resonance effect. The antimicrobial activity of phenolic compounds is highly dependent upon the chemical structure of the molecules [9]. The bactericidal actions of substituted phenols and the normal alkyl derivatives of p-chlorophenols were examined against Gram-negative and Gram-positive bacteria [10,11]. The antibacterial potential of essential oils of sweet basil Ocimum basilicum L. (Lamiaceae) containing 1.8% 4-MP and methanol extracts was evaluated for controlling the growth range of food-borne pathogenic bacteria [12]. It was reported that BHT at high levels as well as at lower levels found in foods might have anti-cancer properties, possibly by damaging free radicals or by stimulating the production of enzymes that detoxify carcinogens. On the other hand 4-MP is carcinogenic to the fore-stomach [13,14].

The rate of chemical reactions depends on the mass of the nucleus with different isotopic substitutions, which slightly affect the partitioning of energy within molecules. These deviations from perfect chemical equivalence are termed as isotope effects. The isotopic abundance ratio is commonly reported in terms of atom percent.

Various applications of the isotopic abundance study includes (a) the distribution of contaminant sources of any molecule on a native, regional, and global scale, (b) the identification and quantification of alteration reactions, and (c) the characterization of elementary reaction mechanisms that govern product formation [15].

Both of the phenol derivatives taken for this study, work via the formation of free radicals. Free radicals are highly unstable species. Due to their highly oxidative characteristics, these free radicals may contribute to carcinogenicity or tumorigenicity; however the same reactions may combat oxidative stress. Hence, the stability of phenol derivatives is important to show enhanced antioxidant properties. This could be enhanced by Mr. Trivedi’s unique biofield energy treatment which is already known to alter the physical and structural properties of various living and non-living substances [16]. The National Center for Complementary and Alternative Medicine (NCCAM) which is part of the National Institute of Health (NIH), has recommended the use of Complementary and Alternative Medicine CAM therapies in the healthcare sector and about 36% of Americans regularly use some form of CAM [17]. CAM includes numerous energy-healing therapies, in which biofield therapy is a form of putative energy medicine that is being widely used worldwide to improve the overall health and wellbeing of human beings. When an electrical signal passes through any material, a magnetic field is generated in the surrounding space [18]. Humans have the ability to harness energy from the environment/ universe and can then transmit in to any object (living or non-living) around the globe. The object(s) always receive the energy and respond in a useful way. This process is called biofield energy treatment. Mr. Trivedi’s unique biofield energy treatment is also called The Trivedi Effect®, which is known to alter the physical, structural and atomic properties in various metals [19-21] and ceramics [22,23] in materials science. Additionally, the impact of biofield treatment has been studied in various fields like microbiology research [16,24], biotechnology research [25,26], and agriculture research [27,28]. Our group of scientists reported that the biofield treatment substantially altered the atomic, structural and physical properties in silicon carbides [29] and carbon allotropes [30]. Based on the outstanding results achieved by biofield treatments on metals and ceramics, an attempt was made to evaluate the effect of biofield treatment on the isotopic abundance ratio of 13C/12C or 2H/1H (PM+1)/PM) and 18O/16O (PM+2)/PM) in BHT and 4-MP.

Both BHT and 4-MP were procured from SD Fine Chem. Ltd., India. Each of the samples i.e., BHT and 4-MP were distributed into two parts, where one part of each sample was referred as control sample and the other part was considered as treatment group. The treatment group was handed over to Mr. Trivedi for biofield treatment in sealed pack and under standard laboratory conditions. Mr. Trivedi provided the treatment through his energy transmission process to the treated group without touching the sample. The control and treated samples were characterized using Gas Chromatography-Mass Spectrometry (GC-MS).

The GC/MS was performed in a silica capillary column. It is equipped with a quadrupole detector with pre-filter, one of the fastest, widest mass ranges available for any GC/MS. The mass spectrometer was operated in an electron ionization (EI) positive/negative, and chemical ionization mode at the electron ionization energy of 70 eV.

Mass range: 20-620 Daltons (amu), stability: ± 0.1 m/z mass accuracy over 48 hours. The identification of analytes were done by retention time and by a comparison of the mass spectra of identified substances with references. 2 μL was injected in splitless mode. The carry gas (N2) flow-rate was kept constant during the run at 2 ml min-1. The stock standard solution of BHT and 4-MP were prepared in methanol (HPLC grade) to a concentration of 100 μg/mL. Working standard solutions were prepared from the stock solutions.

Both the control and treated samples were injected following the same experimental protocol. For GC-MS analysis the treated sample was further divided into three parts as T1, T2, T3 and T4. The GC-MS data was obtained in the form of % abundance vs. mass to charge ratio (m/z), which is known as mass spectrum. The isotopic abundance ratio 13C/12C or 2H/1H (PM+1)/PM) and 18O/16O (PM+2/PM) was expressed by its deviation in treated samples as compared to the control. The percentage change in isotopic ratio (PM+1/PM) and (PM+2/PM) were calculated on a percentage scale from the following formula:

Where, RTreated and RControl are the ratio of intensity at (PM+1) to PM in mass spectra of treated and control samples respectively.

Compounds were dissolved in methanol (HPLC grade) and filtered with 0.2 micron filter tip fitted with a syringe. Phenol derivatives were polar molecule and, therefore, a polar solvent methanol was used as the diluent. Minimum detection limit of the instrument is up to 1 picogram masses. Working standard solutions were prepared from the stock solutions (concentration 100 μg/mL). The spectra was obtained by injecting 2 μL standard solution of the phenol components in methanol. A solvent delay of ~4 minutes eliminates the appearance of the methanol solvent peak in this chromatogram. 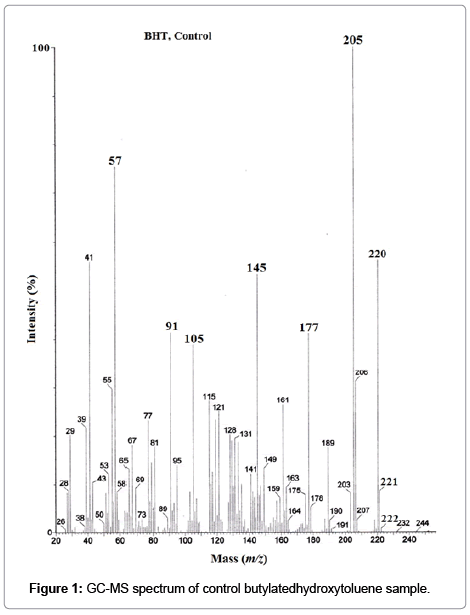 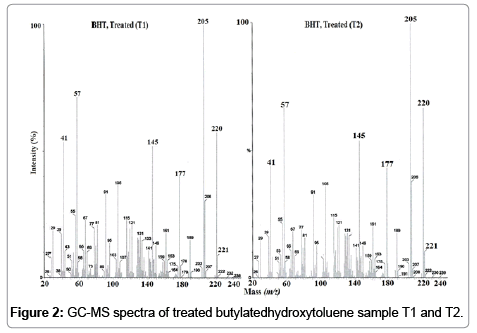 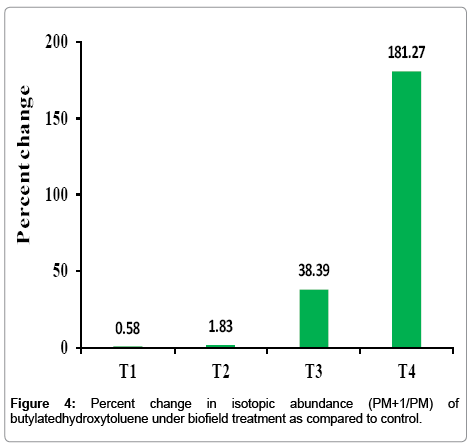 Figure 4: Percent change in isotopic abundance (PM+1/PM) of butylatedhydroxytoluene under biofield treatment as compared to control. 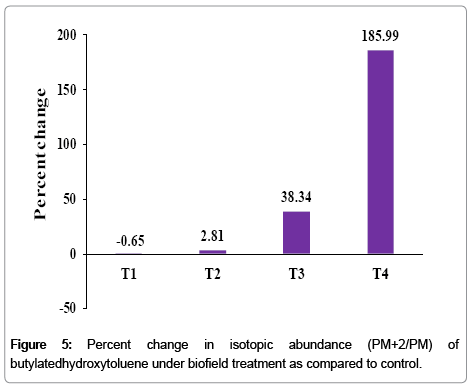 Figure 5: Percent change in isotopic abundance (PM+2/PM) of butylatedhydroxytoluene under biofield treatment as compared to control.

GC-MS spectra of 4-MP: PM peak was observed at m/z=124 in both control and treated samples with different intensity ratio (Figures 6-8). The intensity ratio of PM peak and PM+1 peak are given in Table 2. Total five major peaks at m/z=124, 109, 81, 53, and 39 were observed for both control and treated samples of 4-MP due to C7H8O2+ , C6H5O2+, C6H9+ , C4H5+ and C3H3+ ions, respectively. Peak at m/z=109 and 81 were seen due to the initial fragmentation of 4-MP to hydroquinone (base peak) and methyl radical where hydroquinone was further reduced to cyclohexene (m/z=81). Peaks at 53 and 39 was observed due to the formation of 1,3-butadiene and propa-1,2-diene from the ring opening reaction of 4-MP. One low intensity peak at m/z=27 was observed in all treated (T1-T4) 4-MP samples which was due to the formation of ethene ion (C2H3+). Fragmentation pattern of both control and treated 4-MP molecules were same, however number of fragmented peaks were increased from control to treated samples [32]. 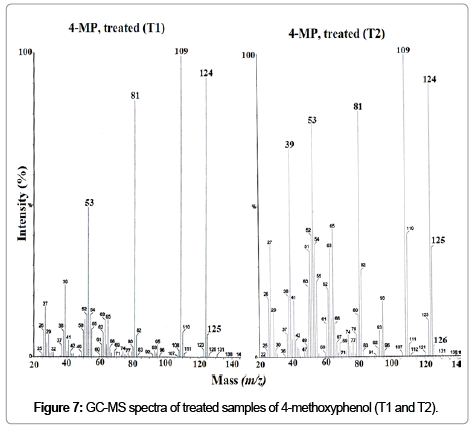 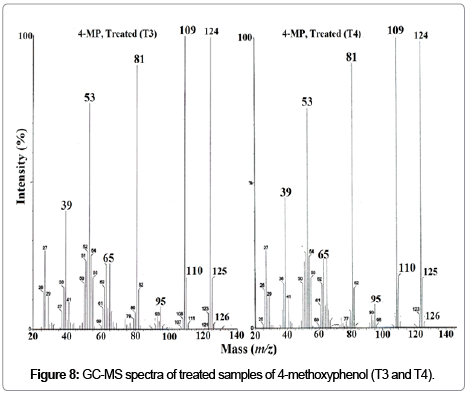 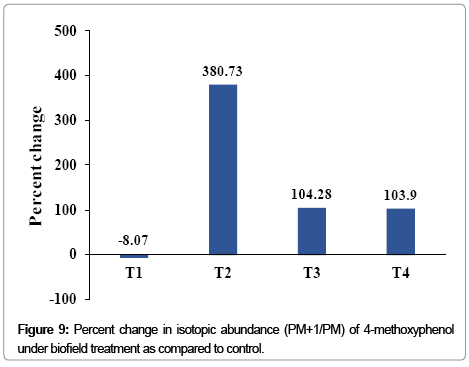 Figure 9: Percent change in isotopic abundance (PM+1/PM) of 4-methoxyphenol under biofield treatment as compared to control. 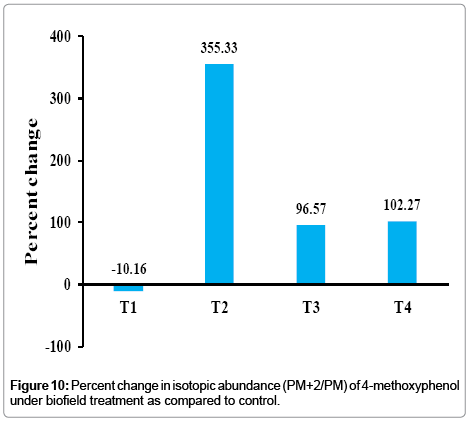 Figure 10: Percent change in isotopic abundance (PM+2/PM) of 4-methoxyphenol under biofield treatment as compared to control.

Atoms taking part in chemical bonds with higher isotopic number might have higher binding energy with increased effective mass (μ) and vice versa. Thus, the increased isotopic abundance ratio of 13C/12C or 2H/1H (PM+1/PM) and 18O/16O (PM+2/PM) in both the compounds (BHT and 4-MP) might increase the effective mass and binding energy after biofield treatment that may enhance the stability of phenol derivatives significantly. The increased isotopic abundance ratio of PM+1/PM and PM+2/PM in samples of BHT and 4-MP after biofield treatment, may result in chemical stability. It could be due to nuclear level transformation of PM+1 and PM, which may induced through biofield treatment. The observed fragmentation pattern and number fragmented peaks were same for control and treated samples of BHT and while number fragmented peaks in treated samples of 4-MP were increased. The increased isotopic abundance ratio may reasonably increase the no of heavier isotopes (i.e., 2H, 13C and 18O) in the molecule after biofield treatment. If a lighter nucleus is replaced by a heavier one then corresponding effective mass (μ) of that particular bond could be changed accordingly. We have presented some probable bonds that might present such as 12C-12C, 1H-12C, 13C-12C, 12H-12C, 1H-13C, 2H-13C,13C-13C, 12C-18O, 1H-18O, 13C-16O, and 2H-16O in the biofield treated molecules. Effective mass is calculated and presented in Table 3. The result showed that μ of normal 12C-12C and 1H-12C bond was 6 and 0.923, respectively. It showed that reduced mass is increased in case of heavier isotope (i.e., 12C-13C=6.26, and, 2H-12C=1.71). The increased μ was observed in case of 18O-12C and 1H-18O bonds also. From the Figures 4, 5, 9 and 10, it was observed that the isotopic abundance ratio of PM+1/PM in treated samples increased by 181.27% and 380.73% in BHT and 4-MP. So maximum number of isotope replacement may occur in this process, which may lead to significant change in energy of the isotope substituted bonds. It may enhance the bond strength, stability, and binding energy of BHT and 4-MP molecules.

The authors would like to acknowledge the whole team from the Sophisticated Analytical Instrument Facility (SAIF), Nagpur for providing the instrumental facility. We are very grateful for the support from Trivedi Science, Trivedi Master Wellness and Trivedi Testimonials in this research work.

Copyright: © 2015 Trivedi MK, et al. This is an open-access article distributed under the terms of the Creative Commons Attribution License, which permits unrestricted use, distribution, and reproduction in any medium, provided the original author and source are credited.
Top