Intrauterine limb gangrene with cerebral infarction is a rare condition and only few cases of this condition have been reported. The neonatal thrombosis needs to be distinguished from intrauterine arterial thrombosis as it is caused by catheterization of the umbilical artery or less commonly seen as complication of sepsis or coagulation disorders. The report describes the case of preterm infant with bilateral brachial artery thrombosis in utero and neonatal gangrene of the left forearm. The right forearm of the infant had a small patch of gangrene with irregular areas of edema and bluish discoloration, extending to the hand. The hand of infant was associated with thrombosis of left middle cerebral artery and acute infarction in left cerebral hemisphere. Both of the upper limbs in the patient were affected, including the left cerebral hemisphere; although in majority of the cases, the limbs are equally affected and the left side of the brain is preferentially involved. LMWH was administered in the present case, which significantly improved the upper right limb. Laboratory findings, including the coagulation markers within normal reference, ranges for the chronologic and gestational age. Further complications were prevented by early post-natal use of anticoagulants and prevention of infection; although the exact cause of this condition was not clear.

Thrombotic events in utero that involve limbs and brain are rare clinical problems with a heterogeneous etiology [1]. Majority of the cases occur due to embolization from the aorta, inferior vena cava, or renal vein to upper extremities and brain [1-3]. In majority of the cases, no identifiable cause was implicated; although, maternal diabetes was found in about 25% of the cases [2-4]. Conservative management is usually indicated to control convulsions, prevent propagation of the thrombosis and control any infection till the gangrene is declared by a line of demarcation to optimize future amputation and reconstruction [4-6].

A preterm female infant was born at 35 weeks gestation to a 30- years old Indian primigravida (para 0 and abortion 0) with history of gestational diabetes, managed by insulin. She had no hypertension during her pregnancy and family history was unremarkable. The amniotic fluid had normal volume and there was no premature prolonged rupture of the membranes. The baby was delivered by emergency cesarean section as the cardiotocography (CTG) depicted evidence of fetal distress. Apgar score was 8 and 9 at 1 and 5 minutes, respectively. The birth weight of infant was 2480 grams, head circumference was 33 centimeters and height was 49 centimeters. Gross examination of the placenta was normal. The patient was mildly distressed at birth, but the presence of patchy gangrene on the left forearm, hand and fingers with areas of bluish discoloration, edema and ruptured bullae were the most striking findings on examination. The right forearm had a small patch of gangrene with irregular areas of edema and bluish discoloration, extending to the hand (Figure 1). Figure 1: Patient under ventilation on the second day after birth with evident gangrenous lesion of both upper extremities.

Brachial, ulnar and radial pulses were absent bilaterally. The baby was admitted to neonatal ICU, where she developed convulsion after 18 hours of birth, which was controlled by phenobarbitone. The infant was mechanically ventilated for 4 days. Laboratory findings included the coagulation markers that were within the normal reference ranges for the chronologic and gestational age; whereas, blood cultures had no growth. Chest and upper limb X-rays were normal. Duplex ultrasound scan revealed occlusion of both brachial arteries. Other vessels including aorta, IVC and both renal arteries were normal. Moreover, the magnetic resonance study revealed occluded left middle cerebral artery with acute infarction in its territory (Figure 2). 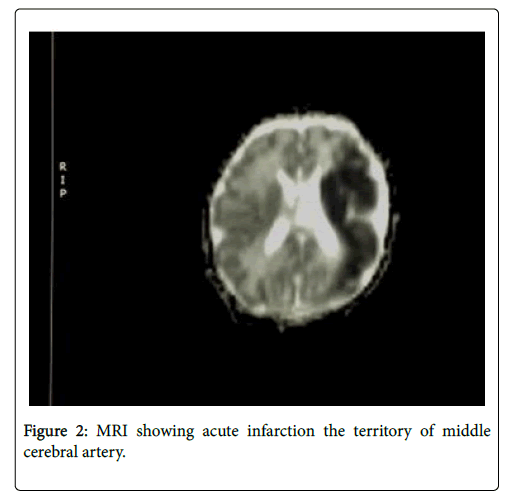 The infant was administered low molecular weight heparin for one month. She was also given a course of antibiotics for 2 weeks and fresh frozen plasma daily for 17 days. The right forearm and right hand were healed with the treatment; and on the third day, duplex ultrasound showed triphasic signals over right brachial and radial arteries. Local debridement of the ulcerated lesions was done, till it was clean with development of healthy granulations and ready for reconstruction. Unfortunately, dry gangrene was propagated to involve the left hand and most of the left forearm (Figure 3). Figure 3: Dry gangrene involving the left hand and most of the left forearm.

The mother during pregnancy was examined thoroughly to rule out thrombophilia, which may be the potential factor for such condition. Moreover, screening of factors including activated protein C resistance, factor V Leiden mutation, free protein S concentration, prothrombin mutation (G20210A), total protein C concentration, anti-phospholipid antibodies total protein S concentration, homocysteine and antithrombin concentrations were also carried out. The vascular surgical team followed the patient till a clean line of demarcation was formed. The patient was discharged after 30 days and went to India, where the amputation was done (Figures 4 and 5). Figure 4: Scarring at the right forearm 6 months after birth. Intrauterine arterial thrombosis is rare (1/30, 000 births) and needs to be distinguished from neonatal thrombosis. Neonatal thrombosis is often caused by catheterization of the umbilical artery or less commonly seen as complication of sepsis or coagulation disorders [1-3]. The most common reported risk factors of intrauterine thrombosis include; maternal diabetes, pre-eclampsia, sepsis, polycythemia, fetal compression, uterine anomalies, amniotic bands, oligohydramnios, malpresentation of the fetus with limb prolapse and umbilical cord entanglement [5-7]. In this case, the mother was suffered from gestational diabetes, but all other risk factors were absent and the compression did not affect the brain.

Inherited thrombophilia involves deficiency in antithrombin, protein S or C and genetic specific mutations of one or more genes [8,9]. In the present case, family history and the laboratory findings of the patient and parents were not evident for thrombophilia. Intrauterine arterial thrombosis of the upper limb and brain was very rare. In majority of the cases, thrombosis occurs primarily in the large vessels; like the aorta, inferior vena cava (IVC) and renal vein [10-12]. Few studies reported that placenta may be the source of emboli; but in the present case, the gross examination of the placenta was normal; however, histopathology was not performed [10,11]. Few studies have also reported that the limbs are equally affected and the left side of the brain is preferentially involved [9-12]. In the present case, both upper limbs were affected, including the left cerebral hemisphere. However, this combination has not been reported previously.

It is mandatory to administer Low Molecular Weight Heparin (LMWH) as an anticoagulant to prevent thrombus propagation or embolism [13,14]. In the present case, LMWH was administered and significant improvement in the right upper limb was recorded. However, it was unfortunate as the insult was severe in left side and gangrene was propagated to involve most of the forearm. The duration of anticoagulant treatment after resolution of symptoms has been controversial; however, Abdelrazeq et al. [2] used LMWH in patient for 17 months and documented the safety of the drug. The infant in present study was administered low molecular weight heparin till discharge after one month. The infant was also given fresh frozen plasma to improve tissue perfusion and supply any deficient factor as it was recommended in few studies [1-3,10-14].

The local management of this condition included debridement of necrotic tissue with the prevention of infection. However, if dry gangrene is established; it is preferable to wait till a line of demarcation that is well delineated before amputation is done to establish the optimum level [11,14].

The early post natal use of anticoagulants, prevention of infection and supportive treatment prevented further complications in this case; although, the exact cause was not clear. The precise pathogenesis of thrombosis has not been found; although, many such cases have been reported. Due to devastating consequences of intrauterine thrombosis, it is important to save the viable structures of the affected individual. Moreover, this rare event needs to be approached with great care. However, other treatment methods may even include anticoagulant therapy and thrombolysis. The most common pathological reasons that result in intrauterine bilateral upper limb gangrene and cerebral infarction include; intrauterine thrombosis, umbilical cord compression, placental emboli and amniotic bands. This case has illustrated the importance of considering the cerebral involvement, when an infant suffers from extreme ischemia. This case has also highlighted the investigation of deficiencies and thrombophilic factors within the coagulation system.

The author is very thankful to all the associated personnel in any reference that contributed in/for the purpose of this research.

Copyright: © 2017 AlZahrani AK. This is an open-access article distributed under the terms of the Creative Commons Attribution License, which permits unrestricted use, distribution and reproduction in any medium, provided the original author and source are credited.