A five year old male child came to pediatric surgical department with alleged history of ingestion of magnetic foreign body followed by development of clinical features of mechanical small bowel obstruction. Clinical examination and Radiological examination was consistent with small bowel obstruction. Laparotomy reveal adhered loop of jejunum and ileum by attraction force of one magnetic foreign in each loop with resultant pressure necrosis of intervening bowel wall. Retrieval of this foreign body with primary repair of jejunal and ileal perforation was done. Patient had uneventful recovery and in 2 month follow up he is well.

A five years old male child presented to pediatric surgical department with complain of distention and colicky pain in abdomen since 4 hours. There was history of one episode of bilious vomiting one hour ago. There was alleged history of ingestion of magnetic foreign body 2 days back but not sure of how many. There was no history of respiratory distress at time of ingestion. On physical examination, he had tachycardia with abdomen distension, tenderness in epigastrium and umbilical region of abdomen and increased bowel sound. Patient underwent laparotomy which revealed dilated jejunal and ileal loops adhered to each other. On gentle handling both loops were seem to adhere with each other by some force and revealed magnetic foreign bodies in each loop, stuck to each other. Both magnetic foreign bodies had crushed intervening intestinal walls, causing pressure necrosis and perforations in both intestinal walls (Figure 2). Both magnetic foreign body retrieved through perforation (Figure 3). Margins of perforation debrided and primarily repaired. Patient had uneventful post-operative course and was discharged after 5 days. On 2 month follow up child is well. 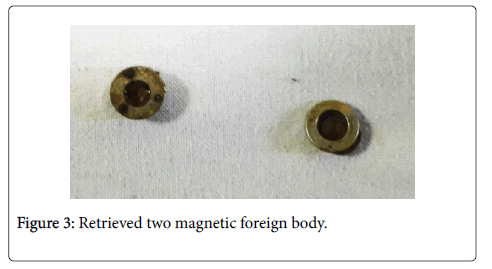 Foreign body (FB) ingestion is common presentation among pediatric age group. Most of them travel gastrointestinal tract without much difficulty and evacuate usually in a few days to weeks [1,2]. 10-20% cases require endoscopic removal [1]. Surgical removal of foreign body is rarely required [1,3]. Ingestion of single magnetic foreign body usually does not produce any complication because like other foreign body it would likely to get spontaneously evacuated but if children has ingested multiple magnet or magnet with other metallic foreign body then it impose risk of severe gastrointestinal complication. Small bowel has relatively thin wall so attraction of multiple magnets towards each other across the bowel loops lead to pressure ischemia and necrosis of bowel wall and development of various complication like obstruction, perforation, volvulus and intraperitoneal hemorrhage due eroding of mesenteric vessel [1,3,4-6]. Absence of free air in Plain abdominal radiography may be explained by fact that these produce local peritoneal reaction and inflammation [4].

The duration between magnet ingestion and development of gastrointestinal complication depends on number and strength of magnetic foreign body [1].

Plain x- ray in two plain should be obtained to know the number of foreign body and associated complication and if plain X ray is inconclusive computed tomography should be considered for better evaluation [6].

The management of single magnetic Foreign body ingestion is controversial as some author advocate observation [1,6], only because they believe that like other nonmagnetic foreign it get spontaneously passed but on the other hand some believe that any magnet ingestion should be treated as if multiple magnet has been ingested, author who believe in second philosophy have proposed a magnet algorithm and recommend any magnet should be removed by endoscopy and if it beyond the limit of endoscopic retrieval, then in-patient observation with serial abdominal radiography until foreign body get evacuate. During this in patient observation surgical intervention should be contemplated at first appearance of symptoms or signs of anticipated gastrointestinal complication [3].

This child had presented with alleged history of magnet ingestion, bowel obstruction with absence of free peritoneal air and apparently single foreign body in plain radiography, it was the bowel obstruction that compelled us to contemplate urgent surgical exploration and during surgery we found two magnetic foreign body and perforation of intervening jejuno ileal wall.

This case highlights the fact that delays in treatment leads to serious complication of multiple magnet ingestion. History narrated by children may be unreliable and if parents or primary care giver found that children has ingested magnetic foreign body whether single or multiple children must be referred to pediatric surgical specialty for further assessment and management.

Copyright: © 2016 Sisodiya RS, et al. This is an open-access article distributed under the terms of the Creative Commons Attribution License, which permits unrestricted use, distribution and reproduction in any medium, provided the original author and source are credited.