Interaction of 4,4-Di Pyridyl and Pyridoxal with Two Amyloid Proteins

Interaction of 4,4-Di Pyridyl and Pyridoxal with Two Amyloid Proteins

There are many factors that can lead to unfolding and refolding of a protein throughout their life. The change from normal forms to amyloid one is associated with conformational changes in the peptide back-bond from a higher degree alpha-helical structure to a conformer in which is present a much higher degree of beta-sheet structure. Amyloid proteins are insoluble, aggregated and inappropriately folded and when deposited within cells they become biologically dysfunctional. These conformational changes are the origin of the development a group of 20 diverse, fatal diseases including Alzheimer Disease (AD) and Parkinson disease (PD) [1]. Transmissible spongiform encephalopathies (TSEs) are also Protein misfolding diseases with fetal neurodegenerative disorders and are called prion diseases because they are caused by an infectious protein (PrPsc) which imposes its three-dimensional structure on the normal cellular form of the protein (PrPc) and resulting in an exponential accumulation of a detergent-insoluble aggregates and is proteinase K resistant PrPsc [2,3]. The sequence of the cellular prion protein (PrPc) present on the cell membrane is highly conserved among mammals with about 85- 97% similarity. The PrPc possesses several physiological functions as ligand uptake, cell adhesion, signal transduction and a potential role in cupper metabolism. The PrPc and the pathogenic amyloid prion protein (PrPsc) possess the same amino acid composition, but vary in conformity. PrPc contain about 40% alfa-helix and less than 10% beta-sheet conformation where PrPsc contain about 50% as a betasheet. Therefore, infectivity gains and partial resistance or absence of resistance is strain specific and dependent on the conformational modification induced by PrPsc into the PrPc [4]. Also, resistance to proteinase K can be acquired after interaction of the PrPsc with calixarene [5,6] or luminescent conjugated polymers [7].

In the following experiments is presented the interaction of 2 amyloid proteins (the pathogenic prion protein and the Alzheimer Disease peptide P53 with the organic chemicals 4,4-di pyridyl and pyridoxal as well a comparison of the interaction of the synthetic peptide P53 of the Alzheimer disease with streptomycin or 4,4-di pyridyl (Figure 1), Molecular Weight 156.18 and Molecular Formula C10H8N2.

This is an organic compound bidentate chelating ligand, forming complexes with many transition metals, electroactive and exhibit intense luminescence. In the following experiment 10 μl of tris buffer pH 7.2 were added in the Eppendorf tubes 2 to 7 then 10 μl of 1 M 4,4-Di pyridyl was pipetted in tubes 1 and 2. Serial ½ dilution were then done after mixing the contents of second tube and 10 μl were transferred to the third tube and dilutions continued to the 7th tube then 10 μl were discarded from this last tube and finally 5 μl of PrPres was added to each tube. After preparation of the mixtures, vortexing, heating 5 min. at 100°C, centrifugation at 12,000 g for 5 minutes, recovering supernatants which were loaded in lanes 8 to 14 respectively. The pellets were suspended in 10 μl of 50% v/v 8 M urea and Laemmli denaturing buffer, vortexed, heated 5 min. at 100°C, centrifugation at 12,000 g for 5 minutes, recovered supernatants were loaded in lanes 1 to 7 respectively on 15% SDS PAGE, electrophoresis, transfer and immunodetection using monoclonal antibodies [8] (Figure 2). The results in Figure 2 showed that the 4,4-di pyridyl do precipitated moderately the PrPres at the highest first two concentrations and weekly thereafter. Most of the PrPres were present in the supernatants indicating that probably lower concentrations of the 4,4-di pyridyl compared to the amount of PrPsc were employed and short incubation period (5 min). 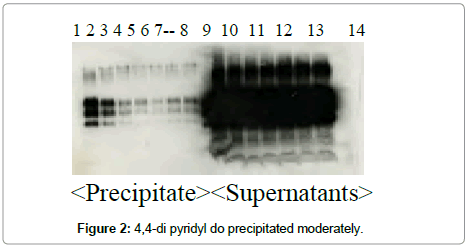 In the following part interaction activity of streptomycin and 4,4- Di pyridyl were compared in presence of PrPres and in a second part in presence of the Alzheimer Disease (AD) synthetic peptide P53. 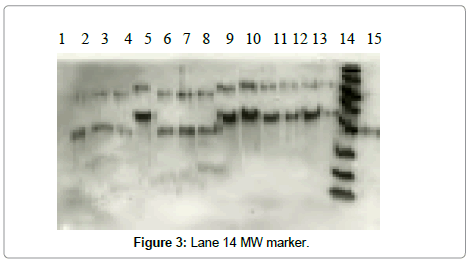 In the second part: The same dilutions of streptomycin and 4,4- Di pyridyl were used to examine their potential interaction with the Alzheimer disease synthetic peptide P53. In Eppendorf 1 to 4 were pipetted respectively 1, 2, 4 and 8 μl of the P53 then tris buffer was added in a volume 12, 11, 9 and 5 μl respectively. In the tubes 6 to 15 were pipetted in each 2.5 μl of the P53 and 5 μl of the tris buffer. To the tubes 6 to 10 was added 5.5 μl from each streptomycin dilution ¼ to 1/64 respectively and into the tubes 11 to 15 was added 5.5 μl from each 4,4-Di pyridyl dilution ¼ to 1/64 respectively. After preparation of the mixtures, vortexing, heating 5 min. at 100°C, centrifugation at 12,000 g for 5 minutes, recovering supernatants which were loaded in lanes 2 to 13 respectively on 15% SDS PAGE, electrophoresis, transfer and immunodetection using monoclonal antibodies (Figure 4). 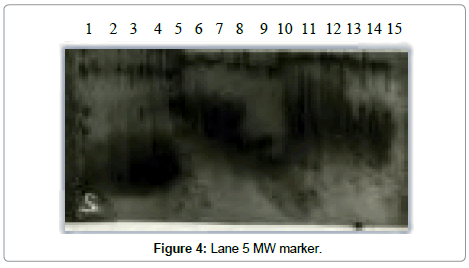 Pyridoxal HCl is one of 3 forms of vitamin B6 (Figure 5) with a molecular formula: C8H9NO3 HCl and a molecular weight of 167.17. In the following experiment 6 μl of bovine PrPres were pipetted into each of 11 Eppendorf tubes then 1 M pyridoxal was added as 0, 1, 2, 3, 4 …. 10 μl in the tubes from 1 to 11 respectively. Tris buffer PH 7.2 was added in variable volume to complete the volume of each tube to 16 μl. After preparation of the mixtures, vortexing, heating 5 min. at 100°C, centrifugation at 12,000 g for 5 minutes, recovering supernatants which were loaded in lanes 2 to 13 respectively on 15% SDS PAGE, electrophoresis, transfer and immunodetection using monoclonal antibodies [8] (Figure 6). 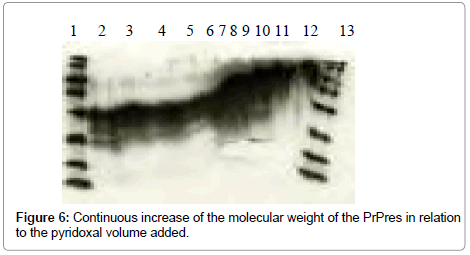 Figure 6: Continuous increase of the molecular weight of the PrPres in relation to the pyridoxal volume added. 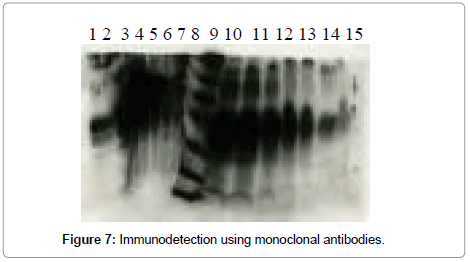 In previous publications, the interaction of the calix-arene [6], ions [9], guanidine molecule containing chemicals [8,10], carbohydrates [11] and proteins [12,13] with the pathogenic prion protein were reported. The results presented in this paper showed that 4,4-di pyridyl also interact with the PrPsc as well as with the Alzheimer disease P53. The quality of the interaction of the 4,4-di pyridyl with the P53 was comparable to that of streptomycin predicting aggregation of the 2 amyloid peptides. Also, Vitamin B6 induced an increase of the PrPsc molecular mass proportional to the pyridoxal volume added and the amount of the PrPsc in presence. The supposed mechanism of interactions between streptomycin and the prion proteins in vitro is described elsewhere [8,10] and suggesting that it occurs through a hydrogen bond transfer between the guanidine groups present on the streptomycin molecules and the negatively charged amino acids of one or several prion proteins thus forming multimolecular aggregates. The exact mechanism by which the 4,4-di pyridyl and pyridoxal interact with the PrPsc is not elucidated just now but can be through an interaction with one or more of the amino acids present on the prion protein.

Until now clinical trials for the treatment of protein misfolded amyloids and infectious prion diseases had significantly unchanged the course of the chronic diseases. The main points to be taken in account for an efficient treatment must comport 3 steps: inactivation of the infectious molecules, disruption of the accumulated aggregates and clearance of the resulting elements outside the brain barriers. Streptomycin and guanidine inactivated the strain infectivity present in brain suspension from infected mice [14,15]. One of the other guanidine containing molecules specially ethylenetetramine [10] where it’s interaction with the PrPsc varied partially from that of streptomycin in that it interacted rapidly with PrPsc and do precipitate only a part of them therefore can allow better aggregate disruption. Also, Concavaline can tag the two mono and bi-glycosylated PrPsc bands so probably can’t more reproduce infective particles. As streptomycin, can’t pass through the brain barriers so it needs to be presented through a nanoparticle carrier that can pass the brain barriers and help to deliver streptomycin within the infected brain regions or if possible, applying for very short laps an electrostatic or ultrasonic charge within certain brain regions for momentary opening of the brain barriers allowing the entry of streptomycin into the brain and permit the circulation of the dissociated aggregates to the outside.

Copyright: © 2016 Moussa A. This is an open-access article distributed under the terms of the Creative Commons Attribution License, which permits unrestricted use, distribution, and reproduction in any medium, provided the original author and source are credited.