Background: Atopic dermatitis (AD) in elementary school children often shows resistance against ordinary treatment. The effect of skin care using water-shower therapy was evaluated mainly by physiological methods in the early summer season when aggravation of dermatitis by perspiration increases.
Methods: Skin care with shower therapy was administered to sixteen children in six schools and performed during school lunch breaks for six weeks. The eczema area and severity index (EASI) and physiological methods, such as measurement of stratum corneum hydration and the skin transparency index (STI) with a colorimeter, which demonstrates skin barrier dysfunction were observed before and after the trial. No other on-going therapies were changed during this study period.
Results: The EASI scores were decreased after showering. Moreover, the stratum corneum hydration and the STI were improved by shower therapy. Significant physiological and clinical improvements in AD were observed. The conclusion of parents after shower therapy was excellent.
Conclusions: Skin care with daily shower therapy in elementary school was effective for an improvement of the skin barrier and skin lesions of AD in children. Results of this study support the recommendation of skin care in the treatment of children with AD.

Atopic dermatitis (AD) is a common chronic inflammatory skin disease in children. Recent studies suggest that the prevalence of AD is increasing in many countries as is that of other allergic diseases. Guidelines for AD treatment have been published in various countries in the world [1], and the children with AD were treated on the basis of those guidelines. However, the pathophysiology of AD is not yet completely elucidated.

Development of AD is thought to depend on a complex interplay of genetic factors, environmental exposure to allergens and nonspecific adjuvant factors. Recently numerous reviews have addressed the origin of AD by genetic analysis [2]. An impaired barrier function of the stratum corneum in AD has been found to result from a decreased production of ceramides [3] and filaggrin [4]. Barrier dysfunction induces water loss in skin and dry skin is characteristic of AD.

Skin care using a shower in elementary school appeared to be an effective and useful treatment for school children with AD [5-7]. In addition, a prompt removal of aggravating factors such as sweat and dust from the skin surface is the optimal way to maintain good skin condition. Furthermore, a new method has been developed to measure skin transparency from outside to inside, which is noninvasive and safe with a good reproducibility [8]. The out-in skin transparency is significantly increased in AD, and the continuous, increased transport of outside stimuli across the stratum corneum may result in persistent itching and exacerbation of dermatitis.

In this report we used this new method as a physiological one and examined the pathophysiological and clinical effects of shower therapy for elementary school children with AD in the early summer season in Japan, when heat and perspiration frequently induce itching and aggravate dermatitis.

All children with AD in six elementary schools with a shower facility in Gunma prefecture, Japan, received an explanation of methods of this investigation and applicants were recruited for participation. AD was diagnosed by the duration, itching and specific skin lesion [9].

Written informed parental consent for each child was obtained before the study, and institutional review board approvals was obtained from the Gunma University Hospital ethics committee.

Shower therapy with warm water was performed in a shower room during school lunch breaks for a 6-week period from June to July in 2008. No soap or shampoos were used during the shower, and topical treatments were not used after the shower. No other on-going AD therapies were modified during the study period.

The symptoms of AD were examined by allergy specialist and assessed with physiological methods before and after the 6-week shower therapy. The Eczema Area and Severity Index (EASI; score range 0-72) [10] was used as clinical scoring of AD.

Stratum corneum hydration (capacitance) [11] was used conventionally as a physiological evaluation method. It was measured in nonlesional skin on the forearm using a moisture meter (ASA-M1; Asahi Biomed, Tokyo, Japan).

The outside to inside skin transparency was evaluated by a new method using a colorimeter and yellow dyes [8] in nonlesional skin on the forearm. Fifty microliters of tartrazine food dye solution (10 mg/dl) was applied to a small water-proofed cotton patch (5×5 mm), and it was attached to the nonlesional skin on the forearm. The values of b*, which indicates the yellow color, was measured using a colorimeter after 30 minutes of provocation with tartrazine. A tristimulus photocolorimeter model CR-400 (Konica Minolta, Osaka, Japan) was used to objectively measure the skin color of the subjects. The skin transparency index (STI) was calculated by the changes of the skin color to yellow as described previously [8].

Observations of patient’s parents about a symptomatic change of AD by shower therapy were recorded after the conclusion of the study period.

The nonparametric Wilcoxon rank sum test was used to analyze difference of EASI, stratum corneum hydration and STI between the pre and the post trial. Correlations between the EASI and the physiological skin measurements were calculated by a linear regression analysis using Spearman’s rank correlation coefficients. A p-value < 0.05 was considered to indicate a significant difference.

Sixteen children (4 girls and 12 boys) in six elementary schools participated in this study and completely carried out the shower therapy. No one modified AD therapies during the study period. The participants were aged 6-11 years (mean age; 8.1 years). All were diagnosed with AD by a pediatrician or dermatologist. Twelve children continuously used medicine such as a moisturizer or steroid ointment.

The pre-trial and the post-trial EASI score in the participants was 0.7-7.5 and 0-2.8, respectively. The EASI score was decreased in all participants after shower therapy. In addition, AD symptoms were improved significantly by skin care with shower (p<0.001; Figure 1A). 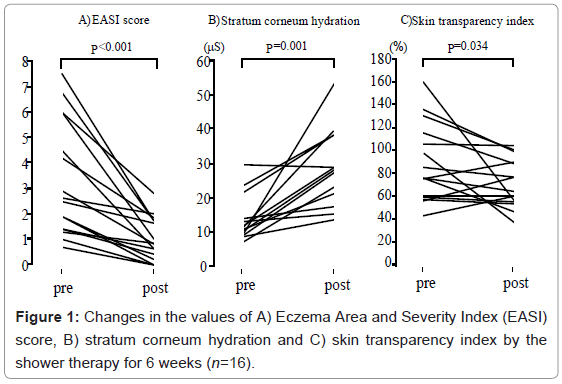 Figure 1: Changes in the values of A) Eczema Area and Severity Index (EASI) score, B) stratum corneum hydration and C) skin transparency index by the shower therapy for 6 weeks (n=16).

STI with a colorimeter and yellow dyes was significantly decreased after shower therapy (p=0.034; Figure 1C). 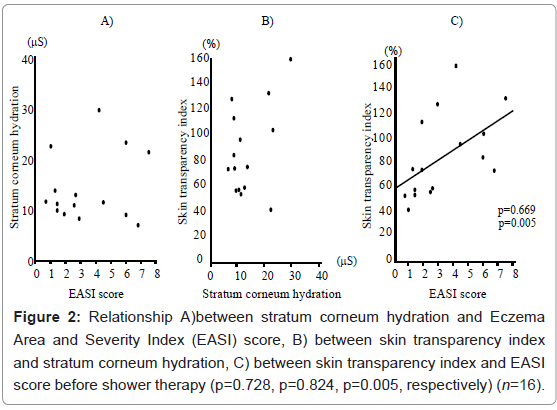 SCORAD [12] and EASI are common clinical indices used for evaluation of AD, and they have been conventionally used for evaluating the severity of AD. On the other hand, many reviews have addressed the origin of AD by genetic analyses [2] and a dysfunction of the skin barrier has been suggested to be one of the basal mechanisms of AD [13]. An examination of skin barrier dysfunction should be added to the evaluation of AD therapy.

A skin barrier dysfunction is usually demonstrated by measurement of transepidermal water loss (TEWL) and stratum corneum hydration [14], and previous data demonstrate a close correlation between the values of TEWL and the penetration of chemicals through the skin in vitro [15]. However, it should be noted that the diffusion of evaporated water molecules through the stratum corneum represents only an in-out barrier function and does not necessarily correlate with the diffusion of protein and chemicals that often affect the inflammatory processes of AD.

Previously, Hata and his coworkers monitored the non-invasive, objective out-in skin functional parameters [16]. Their method is excellent, but it is difficult for routine measurements in children with AD. The method described in this report is simple and easier, because only the yellow dye used for food is applied to the skin. In addition, it can be performed safely on young children. The method was carried out with no problems in the current study. Furthermore, this method can directly demonstrate the out-in skin transparency. This report measured stratum corneum hydration and STI, thus the in-out and the out-in skin transparency have been evaluated.

First, this study confirmed the usefulness of shower therapy in elementary school. From questionnaire investigation of shower therapy for parents of AD children, approximately 90% of them answered that AD symptoms were improved by shower therapy. Many studies on AD have established guidelines for the effective management of this condition [17]. These guidelines suggested that basic therapy consists of avoidance of triggering factors and optimal skin care. One of the irritants is allergens which induces allergic inflammation on atopic patients [18]. Studies on the effects of house dust mite exposure on eczema have demonstrated specific effects of different mite species [19]. Others reported non-specific irritants; such as sweat, dust [20] and staphylococcal enterotoxin [21]. It is clear that these outside irritations and stimuli to skin contribute to the onset and the aggravation of AD [22].

Furthermore, some parents were voluntary participation to this study and may have a good adherence for AD therapy, thus we speculate this study may realize the importance of skin care to the parents of AD children.

Third, our data demonstrated a significant correlation to be found between EASI score and STI. It is clear that an increased penetration of outside stimuli such as sweat, dust or allergens induces a prolonged skin itching and chronic inflammation [1]. Concerning the significant correlation between EASI score and STI, the severity of AD may be partly dependent on the out-in skin transparency. Outside stimulus factors can penetrate skin barrier more easily in severe AD patients, whose skin barrier are more destructed, resulting in the progression of severity of AD. The dysfunction of out-in skin transparency, which may be induced by the large spaces that exist among the skin cells, could show severe, chronic symptoms due to both water loss and nonspecific irritants.

One of the factors which induce aggravation of AD is stress in both children with AD and adult patients [25]. There was concern that performing daily shower therapy in elementary school would be stressful for AD children. However, all children completed the 6-week shower therapy, and they seemed to feel refreshed by the decrease in skin discomfort. Parental questionnaires revealed that only two children had no change in the symptoms with shower therapy, but they were very mild cases.

In conclusion, skin care using shower therapy during elementary school was effective and useful for AD treatment. In addition, a significant improvement of the skin barrier was observed in AD patients. The efficacy of shower therapy was demonstrated by both the physiological evaluation and the observation of clinical symptoms. Furthermore, this study clearly suggests that the STI in nonlesional skin of AD patients is a reliable and objective index to evaluate skin barrier function. This method can thus allow physicians to make a plan for long-term treatment of the patients with AD more precisely for each individual.

Copyright: © 2012 Takami S, et al. This is an open-access article distributed under the terms of the Creative Commons Attribution License, which permits unrestricted use, distribution, and reproduction in any medium, provided the original author and source are credited.