Ventricular Septal Defect (VSD) is the most common cardiac malformation accounting for 25% of congenital heart disease. The size of the left to right shunt is determined by; physical size of the VSD and level of pulmonary vascular resistance. Big VSD can lead to heart failure, which will increase the tissue hypoxia and the possibility of chest infections and growth failure.

Hundred patients with isolated VSD from Pediatric Teaching Hospital In Sulaimani (outpatient and inpatient), were studied prospectively for 7 consequitive months starting from September 1st 2008 to March 31st 2009 in regard to the effect of VSD on growth, To reduce the effect of malnutrition and other factors on growth, a sample of 100 children were taken randomly (control) attending (Ali Kamal) outpatient clinic in Sulaimani for acute simple illnesses were used for comparison.

According to the study weight is the most sensitive parameter for studying the effect of VSD on growth and it is greatly affect by the size of VSD with no significant effect of the gender on growth of the VSD patients.

Since feeding is the most strenuous activity in the early months, the feeding history is very important. The infant progressively tires with feeding; this symptom begins during the 1st month and increases in severity as PVR falls. Symptoms occur earlier in premature than in full term infants [5].

- Infants with large left to right shunts appear thin and are underweight.

1. The chronic inadequate caloric intake as the main cause of growth retardation [8].

2. Big VSD can lead to heart failure, which will increase the tissue hypoxia and the possibility of chest infections [9].

6. Gastro-intestinal tract (GIT) absorption defect because maturation of GIT is disturbed. In addition, there is excessive protein loss from the GIT.

Aims of the Study

To study effects of VSD on growth parameters (weight, height and occipitofrontal circumference) of children Kurdistan.

Hundred patients (54 females and 46 males) aged (1 month to 14 years) were study prospectively for the period from 1/9/2008 to 31/3/2009. Only patients with isolated VSD seen in Sulaimani Teaching Hospital/cardiology unit included in this study. The variables taken were Age, Sex, Residency, and Age at first presentation, Height, Weight and head circumference measurements.

Clinical diagnosis confirmed by Echocardiographic examination. The Echocardiographic examination was by Siemens machine (twodimensional and Doppler) done by 3 and 7 MHz sector probe and the patient on supine or left decubitus position. The pulmonary artery pressure assessed by Doppler study depending on the pressure gradient through the VSD and compared with the systemic pressure of the patient. In these patients the growth parameters (weight, height and head circumference) were measure, the weight for young patients, Seca scales (maximum weight scale 16 kg, minimum weight scale 10 gm) used, for older patients, AVERY scale was used. While the height measured by standing of the patient on the footplate of the stadiometer, with heels together and head in the Frankfort plan (i.e. with the lower border of the orbit in the same horizontal plan as the external auditory meatus). The top of the stadiometer being Counter-balanced, rested lightly on the patient’s head. The patient then stretched upward fully, aided by relaxing the shoulders and by applying gentle pressure on the mastoid processes.

The Height red to the last completed millimeter, this technique minimizes variation in posture due to tiredness or boredom, which may otherwise amount to 10 mm or even 20 mm.

Supine length was measure with the child lying on his back, in which child’s head in the Frankfort plane and applied gentle lengthwise pressure to bring the top of his head in to contact with the fixed headboard and with the child’s feet toes pointing directly upwards,.

Also pulling gently to stretch the child brought the moveable footboard to rest firmly against the child’s heels.

The head circumference (OFC) was measure by tape measure; the measurements were express as centiles when plotted on Wt. for age, Ht for age, OFC.

To reduce the effect of malnutrition, 100 children of the same ages were used for comparison attending (Ali Kamal) outpatient clinic for acute simple illnesses are collected and each examined for Wt., Ht and OFC and the measurements were expressed also on the same centile charts ((height (Ht), for age, weight (Wt) for age and OFC for age)).

The data collected were analyze by SPSS soft were version 10 using:

The collected sample consist of 2 groups (patients and control), each group including 100 patients, and to exclude the effect of age variable on growth, it was equivalent the two groups using t-test for two independent samples and reaching to the results that there is no statistically significant difference between the ages of the two groups (p-value = 0.109)*

Fifty four percent of the patients with VSD were from Sulaimani city and the rest from outside center.

Size of VSD: The patients with VSD are distribute according to the VSD size (Figure 1). 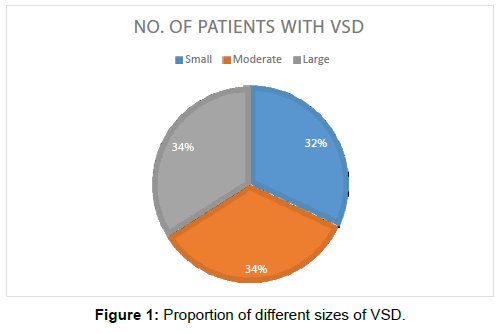 Effect of VSD on Growth

Forty patients (40%) with VSD were below third Centile for their weight, while it was only six (6%) for age in the matched control group.

There was a highly significant difference (p-value <0.001) between the two groups (controls and patients), (Figure 2). 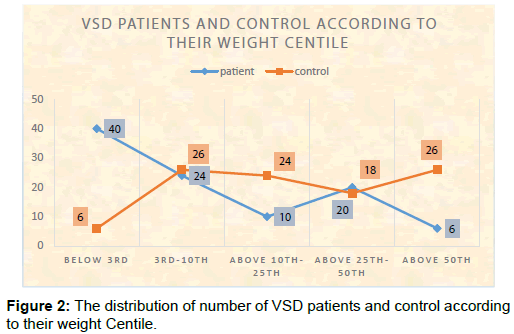 Figure 2: The distribution of number of VSD patients and control according to their weight Centile.

There was no significant difference (p-value>0.05) between VSD and age matched control group regarding height Centile as seen in Figure 3. 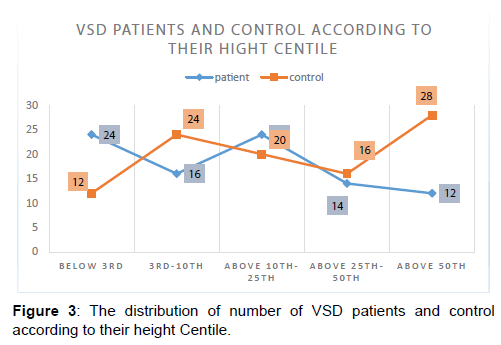 Figure 3: The distribution of number of VSD patients and control according to their height Centile.

Table 1: The distribution of number of VSD patient according to their OFC Centile.

Using t-test to compare between VSD patients and age matched control for all the growth parameters (Wt., Ht. and OFC).

There was a significant difference (p-value <0.05) in the mean weight and mean OFC between VSD patients and control.

- There is no significant difference between the two groups regarding height Centile.

Table 2: The t-test results for comparison between the VSD patients and the control according to weight, height and occipito-frontal circumference.

Effect of VSD Size on Parameters of Growth (Wt., Ht. and OFC):

A. Effect of VSD size on weight

Using Chi-square test there was a significant difference (p-value <0.05) in relation of VSD size and weight.

Table 3: The distribution of patients according to the VSD sizes and its effects on the Centile weights.

B. Effect of VSD size on height

There was no significant difference (p-value>0.05) between the VSD size and their effect on height Centile (Table 4).

Table 4: The distribution of patients with VSD according to the VSD sizes in relation to the heights Centile.

There was not significant difference (p-value>0.05) between the size of VSD and their effect on OFC Centile. (Table 5).

Table 5: The distribution of patients with VSD according to the VSD sizes in relation to the OFC Centile.

The Relation of Gender to Growth Parameters (Weight, Height and OFC):

Table 6: The relation between the gender and Centile Wt. in patients with VSD.

Table 7: The relation between the gander and Centile Ht. in patients with VSD.

The patients with VSD are distributed according to the gender in relation to the Centile OFC (Table 8) which shows that 29.6% of females are below 2% while 26.1% of males are below 2%, but the difference is not significant (p-value>0.05).

Table 8: The relation between the gender and Centile OFC.

Failure to Thrive in Patients with VSD

Table 9: Failure to thrive in patients with VSD.

In this study (42%) of patients with Isolated VSD were presented in the first 6 months of life, and this figure is less than in Aziz study (67%) and more than in Ceylon study (8%) [13,14], (Table 10). This could be explain on weak parental alertness, delayed medical diagnosis, the size of VSD, pulmonary blood flow and pressure that in small VSD the patient may remain asymptomatic and discovered during a routine physical examination [1].

Table 10: Comparison between this study, Aziz study and Ceylon study concerning the age of first presentation.

Since feeding is the most strenuous activity in the early months, the infant progressively tires with Feeding. This symptom begin during the first month of life and increase as pulmonary vascular resistance (PVR) falls, so most of patients seen in the 1st 6 months of life [5].

Table 11: Comparison between this study, Aziz study, and Feldt study.

In this study (40%) of patients with VSD were below 3rd Centile for their weights, while it was only (6%) for age matched control group, which is highly significant (p-value <0.001). This confirms that the VSD and its sequelae is the main cause of failure to thrive in these patients.

There was no significant difference between VSD patients and age matched control group regarding height Centile (Table 3). This indicates that the weight is a very sensitive indicator for growth especially in patients under age of 6 months (42%). This is because the illness is too early to affect the height, and this in agreement with Aziz study who found that weight is more severely affected than height [13].

This study reveals that the weight is greatly affected by the moderate size VSD (52.9% below 3rd Centile), then large VSD (47.1% below 3rd Centile) and less affected by small VSD (18.8% below 3rd Centile), and this explained on the basis that large VSD mostly associated with elevated PVR which limit the magnitude of the left to right shunt while it is extremely unusual for patient with moderate VSD to have marked elevation of PVR [12]. Moderate & large VSD can lead to heart failure, which will increase tissue hypoxia and the possibility of chest infections [9]. There was no significant difference (p-value > 0.05) between the size of VSD and its effect on both height and OFC Centile.

There were no signification difference (p-value >0.05) from the gender point of view in regard to growth retardation, (Tables 9-11) and this agree with Aziz study [13].

Failure to thrive were seen in 8 patients (8%) were below 5 years, while Severe failure to thrive was seen in 4 patients (4%) that were less than 5 years (i.e. 4% of VSD patients were at risk of neurodevelopment delay and intellectual retardation because the maximum brain growth and increase in head circumference is during the early years of life [16].

Probably the cause of failure to thrive related to the size of VSD particularly with moderate to large VSD (Table 9) as malnutrition excluded.

• Most of patients with VSD were presented in the first 6 months of life.

• Although statistically not significant, VSD is slightly more common in females than males.

• Medical care and orientation about CHD is better in Sulaimani city.

In view of what had been conclude from this study, we recommend the following points:-

1. Encourage families to bring their children after diagnosis for checkup regularly.

2. Parents should be reassured of the benign nature of the small defect, and the child should be encouraged to live a normal life.

3. Careful medical management of infants with moderate & large VSD recommended at the control of congestive heart failure to decrease the incidence of failure to thrive.

4. Welfare clinic should be alerted to the presence of murmur & refer them to the nearest hospital for further evaluation.

5. Encourage parents to prepare meals high protein and vitamins to promote growth, as these children are slow to accept variable food because they get tired easily.

6. Patients with moderate and large size VSD need special cardiac center for surgical interventions to prevent VSD complications and its effects on growth and neurodevelopment progress.

Copyright: © 2015 Salih AF. This is an open-access article distributed under the terms of the Creative Commons Attribution License, which permits unrestricted use, distribution, and reproduction in any medium, provided the original author and source are credited.