Disk Batteries: A Danger to Children

Disk Batteries: A Danger to Children

Background: The common use of disk batteries in recent years and their growing use in household appliances and electrical tools, especially the toy, and their accidental swallowing by children has become a real danger for them, the present study was design for acquiring the new strategies to prevent and reduce disk battery swallowing and complications.

Methods: 43 children (31 girls and 12 boy), age between,10 months to 4 year ,who admitted because of disk battery swallowing, followed up between April 2009 to April 2012 in pediatric surgery center.

Conclusion: It seems attraction of disk battery swallowing for children relates to its shape and size and easy availability with changing these factors, this potential danger for children can be reduced.

Since the common use of disk batteries in recent years, and their growing use in household appliances and electrical tools such as watches, calculator, remote control devices and especially the toys, their accidental swallowing also has become a risking factor for children. Before 1983, only 6 cases of swallowing of such batteries had been reported in the medical literature [1]. Incidence of disk battery ingestion is increasing and parallels the increasing use of electronic devices. Children less than 6 years are mostly involved with a peak incidence in 1 to 3 years old. Most ingested disk battery pass harmlessly through the gastrointestinal tract. Lodgments in the digestive tract require immediate endoscopic removal to prevent or minimize major sequel or fatality such as esophageal perforation, Tracheo esophageal Fistula (TEF) and aorta-esophageal fistula. TEF secondary to disk battery ingestion has been reported within 4-6hrs of ingestion and lodgment [2]. American Association of Poison Control Centers listed the coin batteries in 2009 at the top of the table of most important fatal causes of accidental swallowing in children below 5 years old [3]. In the first reports of this issue, the batteries were mainly considered as foreign bodies like other similar cases, and the researchers focused more on understanding their passage through the gastrointestinal tract, the possible stuck location and managing them via endoscopy or surgery [4]. However, given that these batteries contain heavy metals and some caustic material fluids that can be potentially dangerous to living tissues, gradually the studies were drawn to different types of batteries regarding their size and type and their content. Lithium batteries, which have a higher voltage and larger sizes as well (20 mm or more) has the highest risk [5]. Although most cases of swallowing of these batteries are associated with their uncomplicated and sometimes Asymptomatic passage through the gastrointestinal tract, however, a variety of complications may occur in some cases, especially when the battery gets stuck in the esophagus, ranging from severe tissue damage and hollow viscus perforation and fistula , or in respiratory system, its aspiration can result in tracheal damage and stenosis, bleeding, edema as well as vocal cord paralysis and ventilator problems or even death [6]. Given above, and the necessity of acquiring strategies to prevent and reduce the complications, the present study was designed and performed to show some of these complications and consequences of this preventable harm in children.

This was a descriptive-retrospective study that was performed in imam Reza Hospital, Kermanshah-Iran between 2009 and 2013. All 43 cases of disk battery swallowing were included, exclusion criteria was swallowing of other foreign body (coin, needle, bone, toy...) or disk battery aspiration in respiratory system. All patients had been hospitalized in the pediatric surgery service, the information extracted from their files, including demographic data (age, sex, etc.), initial symptoms appeared in victims, diagnostic and therapeutic procedures. Possible complications and their diagnostic and therapeutic courses and success rate of management were recorded. All cases examined initial, asymptomatic patients in whom, first abdominal X-ray showed batteries in lower abdomen observed with serial radiography until patients defecates battery or become symptomatic. If disk battery were seen in upper abdomen or esophagus then patients underwent endoscopic removal. Remaining symptomatic patients in whom batteries passed from stomach and or endoscopy failed to remove it from stomach or esophagus underwent surgical exploration.

We included 43 cases in this study who aged 10 months to 4 years, fromwhom15 children (12 girls and 3 boy) underwent, therapeutic intervention (11 endoscopy and 4 surgery) and remaining 28 cases observed only until they passed batteries spontaneously, without any intervention or any sequel. The sources of batteries were different, including remote control device, toy, calculator and watch. Mean time of interval between swallowing and referring to hospital was 6 hours (1 hours to 3 day). Early symptoms of the patients included a various range: From asymptomatic cases, to drooling, nausea and vomiting, Epi gastric and abdominal pain or retrosternal pain, diarrhea and melena, and systemic symptoms such as fever and lethargy. There were acute abdominal symptoms and peritonitis in one patient who had been undergone emergency surgery. All patients had been typically diagnosed by plain radiography. 8 batteries at time of diagnosis were impacted in the esophagus (4 in the upper and 4 in the lower esophagus). The 6 batteries were in upper abdomen in first abdominal X-ray and in 29 cases batteries were in lower abdomen (small intestine or colon). The impacted batteries in the esophagus underwent endoscopy. In 5 patients, the endoscopic attempt was successful in removing the battery; in one patient, the battery had been pushed into the stomach to be passed spontaneously. However, in 2 patients, the endoscopy failed and the patients underwent surgical removal by esophagotomy. Interestingly, even in cases where the endoscopic procedure had been done within a few hours successfully and the battery had been pull out, at least erosive esophageal mucosal damages were seen in 4 case. If batteries were seen in upper abdomen or esophagus In admission, they underwent endoscopy rapidly, but if it found in lower abdomen with no symptoms, they observed only with periodic radiologic control. All batteries that founded in lower abdomen in first X-ray passed without sequel, But in one case in whom, child swallowed one disk battery and then a magnet, battery perforated small intestine because battery and magnet impacted in different parts of intestine and absorbed each other and it resulted in pressure necrosis of two points of intestine and frank peritonitis happened, the child underwent emergent surgery (removal of battery and magnet and repair of small bowel in 2 point) another one patients in whom battery impacted in stomach with severe abdominal pain underwent gastrotomy and removal of battery because first endoscopic attempt failed to its removal. A total of 4 hospitalized patients had led to operations. Two esophagotomy, 1 gastrotomy and 1 laparatomy due to peritonitis (Figure 1, Tables 1 and 2). 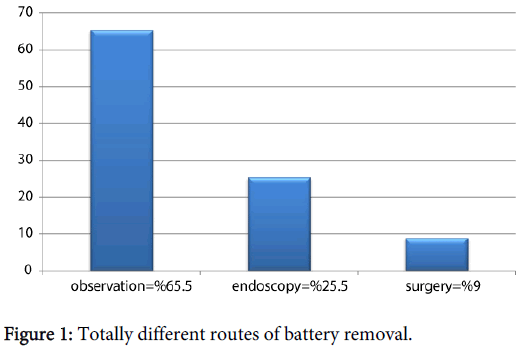 The present study was a retrospective study to investigate some of the more serious consequences and complications of swallowed disc batteries in children. According to the study type and sample size, naturally, its results cannot be extend epidemiologically to all cases of swallowing disc batteries. In our study most of cases defecate and passed batteries spontaneously without any serious consequences and we observe them only. But some cases need to endoscopic intervention and few need surgical intervention to remove batteries. In our series, number of girl were more than boys considerably. In a similar study by Chang et al. in 2004, the number of boys was more by 2 to 1 ratio. In another study performed by Litovitz in 1983, among the 56 cases reviewed, the passage of swallowed batteries through the gastrointestinal tract were without any complication in 51 cases, and only in 5 cases, the batteries were entrapped in the esophagus and caused some problems [7]. In our study, the most severe injuries were related to impaction of battery in esophagus, including two cases leading to esophagotomy. in our series all batteries that passed from stomach, transit rapidly from all parts of intestine and colon and defecated spontaneously without problem, the exception was related only to one patient, in whom due to simultaneous swallowing of one disc battery and one magnet and because of absorb of these two piece in two different part of small intestine, pressure necrosis and perforation of intestine happened that resulted in peritonitis. In the cases reviewed in our study, the size and type of the batteries had not been evaluated. However, it can be assumed that batteries larger in size are more likely to be entrapped in the esophagus and causing complications. Also, the material and content of the batteries would have been effective in the extent of damages. In Panella et al. study in 2013 and Litovitz et al. study in 2010, the prevalence of lithium-containing batteries in larger sizes has been noted as a factor for increased morbidity caused by swallowing of such batteries in recent years [3]. The appliances and devices that children swallowed their batteries were generally small appliances available to the children hands, such as remote control devices and toys, which have also been considered in previous studies. In another study by Litovitz in 1985, the means and devices available for children, including the use of hearing aids by the children with hearing impairment were noted [8]. Another point is that, although most of the victims in the early hours after swallowing batteries have been bring to the medical centers, even in cases where endoscopic intervention was able to pull out the battery, evidence of erosion of the esophageal mucosal damage was observed. This had been also considered in Stanley et al. study in 2010 that such damages can occur within a short period after swallowing disk batteries, and therefore, the immediate diagnostic and therapeutic intervention and subsequent careful follow-up were stressed while confronting by such victims [9]. Due to the opaque nature of these batteries, the plain radiography would be the first and best available diagnostic tools. This is also noted in our study and in previous studies, including Steinberg et al. study in 2013 [10].

According to the results of this study and previous studies, and given the increased prevalence of swallowed disc batteries and the ratio of those with complications, paying attention to the preventive approaches of swallowing such batteries seems to be significantly necessary. To this end, designing and implementation of training programs and warning the parents regarding more care of their children and considering the equipment and accessories available to them should be more focused. In addition, in designing and construction of these types of batteries in the future, their proper packaging and the use of shapes and materials with less potential for swallowing and less attraction for children, containing less harmful material should be considered.

Copyright: © 2015 Amanollahi O, et al. This is an open-access article distributed under the terms of the Creative Commons Attribution License, which permits unrestricted use, distribution, and reproduction in any medium, provided the original author and source are credited.