Direct Determination of Four ACE-Inhibitors Lisinopril, Enalapril, Captopril and Fosinopril in Pharmaceuticals and Serum by HPLC

Direct Determination of Four ACE-Inhibitors Lisinopril, Enalapril, Captopril and Fosinopril in Pharmaceuticals and Serum by HPLC

The high performance liquid chromatography (HPLC)-UV method for the simultaneous determination of lisinopril, enalapril, captopril and fosinopril in human plasma is proposed. Good separation of the analytes was achieved by gradient RP-HPLC with the mobile phase composed as acetonitrile: water (60:40 v/v) adjusted to pH 3.0 by orthophosphoric acid. Lisinopril, enalapril, captopril and fosinopril were eluted from a Purospher STAR RP-and Hypersil ODS column in 1.8, 2.9, 3.2 and 5.4 min respectively. Good linear relationships were observed for all of the analytes (R2 higher than 0.995). Intra and inter-day precision and accuracy results were 98.0 to 102%. Application of the suggested procedure was successfully applied to the determination of theses compounds in active pharmaceutical preparations, dosage formulations and human serum with high percentage of recovery, good accuracy and precision (no interference of excepients) and this method can be applied to routine clinical analysis 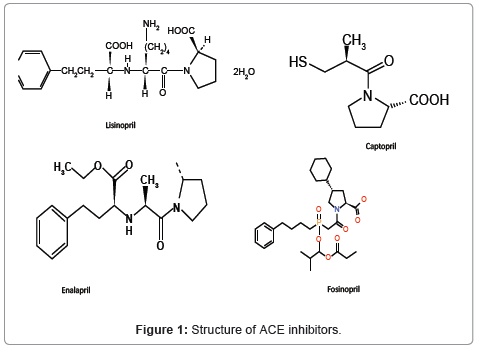 Lisinopril, (S)-1-[N2-(1-carboxy-3-phenyl propyl) -L- lysyl] -Lproline dihydrate a lysine analogue of enalaprilate, is a white to off-white crystalline, odorless powder Enalapril(S)-1-[N-[1-(ethoxycarbonyl)-3- phenylpropyl]-L-alanyl]-L-proline,(Z)-2- butenedioate is the maleate salt of enalapril a derivative of 2-amino acid, L-alanine and L-proline. Enalapril is a pro-drug it is bioactivated by hydrolysis of the ethyl ester to enalaprilate active form.

The measurement of ACE-Inhibitors serum concentration is essential to optimize therapy and to avoid sub therapeutic or toxic concentrations particularly for patients with both impaired renal and hepatic functions. This paper describes an isocratic reversed-phase high performance liquid chromatographic method for the determination of four ACE-Inhibitors: lisinopril, enalapril, captopril and fosinopril. The isocratic HPLC method uses a simple mobile phase, UV-detection at 225 nm, and a simple sample-preparation step for serum samples. UV-detection is simple, rapid, selective, and reproducible, and sensitivity is adequate for routine use. Direct determination of the examined compounds in small volumes of human blood serum can be accomplished by protein precipitation using acetonitrile. The method was validated in terms of linearity, accuracy, precision, sensitivity, selectivity, and stability.

In addition, the UV spectra of individual drugs were recorded in the wavelength range from 200 to 400 nm and overlap to each other. It was found that all the drugs exhibited the high response at 225 nm.

Standard stock solution was prepared by dissolving 10 mg each of enalapril, captopril, lisinopril and fosinopril in the mobile phase and the volume made up to 100 mL with the same solvent. For the calibration curve, six calibrators of drugs were prepared by making serial dilutions from stock solution over the range of 5-100 μgmL-1.

Twenty tablets of each lisinopril, enalapril, captopril and fosinopril were weighed to obtain the average tablet weight and then powdered. Equivalent to 10 mg of enalapril, 25 mg of captopril, 10 mg of lisinopril and 10 mg of fosinopril were weighed and the solution was made up to 100 mL with mobile phase. The resulting mixture was allowed to stand for 1 hour with intermittent sonication to ensure complete solubility of the drug (stock solution). This stock solution was filtered and the filtrate was diluted to the desired concentration. All sample and standard solutions were filtered through 0.45 μm filter paper before injection into the system. A placebo tablet was also subjected to the same process as discussed above. The possibility of excepients interference in the analysis was studied.

Plasma samples, obtained from healthy volunteers, were collected and stored. To 1.0 mL of plasma, 9.0 mL of acetonitrile was added; the mixture was vortexed for 1 min and than centrifuged for 10 min at 10,000 rpm and the supernatant was filtered by 0.45-micron membrane filter. An aliquot of serum sample was fortified with lisinopril, enalapril, captopril and fosinopril to achieve final concentration.

To optimize the operating conditions for isocratic RP-LC detection of all analytes, a number of parameters such as the mobile phase composition, pH and the flow rate were varied. Various ratios (50:50, 60:40, 70:30, v/v) of methanol: water was tested as starting solvent for system suitability study. The variation in the mobile phase led to considerable changes in the chromatographic parameters, like peak symmetry, capacity factor and retention time. The pH effect showed that optimized conditions are reached when the pH value was 3, producing well resolved and sharp peaks for all drugs assayed. Henceforth, in the present method pH adjusted to 3 using wavelength 225 nm (isobestic point) was used. However, the ratio of (60:40 v/v) ACN: water pH adjusted to 3 with phosphoric acid as mobile phase (filtered through a 0.45 micron filter), a flow rate of 1.0 mLmin-1 was chosen as optimal condition. The International Conference on Harmonization [23] has defined these validation parameters which are summarized below.

Before sample analysis, six consecutive replicate analysis of the drugs at a concentration of 100 μgmL-1 for lisinopril, enalapril, captopril and fosinopril were assessed for repeatability, peak symmetry, theoretical plates and resolution. Results are depicted in Table 1, sharp and symmetrical peaks were obtained with good base line resolution (Figure 2). 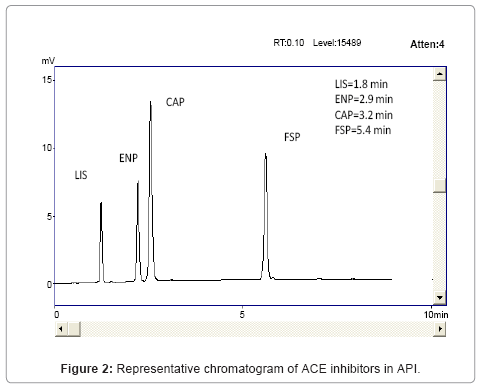 The specificity of the method was observed by analyzing the pharmaceutical formulation. The excepients did not show any interference with the peak of ACE inhibitors. No significant changes in AUC or retention time of the drug in presence of excepients.

Linearity studies were performed on 6 different concentrations. The calibration curves were linear in the range of 5-100 μgmL-1 for lisinopril, enalapril, captopril and fosinopril with correlation coefficient (r2) of ≥ 0.9997 (Table 2). Statistical soft ware was used to generate linear regression equations for all calibration curves.

Limit of detection and quantitation

The precision was investigated with respect to repeatability (intraday precision) and intermediate precision (inter-day precision) and was expressed as relative standard deviation (RSD). These experiments were repeated over three days period to evaluate inter mediate precision. Accuracy of the method was determined by adding known amount of all analytes (lisinopril, enalapril, captopril and fosinopril) in the pharmaceutical formulations. All measurements were performed in triplicates (Tables 3 and 4).

Table 3: Method accuracy from recovery assays for the studied analytes.

The ruggedness was established by determining lisinopril, enalapril, captopril and fosinopril using the same chromatographic system and the same column by two analysts on different days. The results indicated that the method was capable with high precision. Additionally good separations were achieved which suggested that the method was selective for all components under the test (Table 4).

Robustness of the methods was checked by making small deliberate changes in the mobile phase (± 5%), pH (± 0.01) and flow rate. These variations had a minor effect in operating conditions. One parameter was changed in the experiments at a time and assays were carried out in triplicate.

The developed method was applied for the determination of drug content in marketed formulations (Figure 3). Similarly the % recoveries and r2 of dugs in presence of serum shown in (Figure 4) that the applicability of method for therapeutic purposes also. 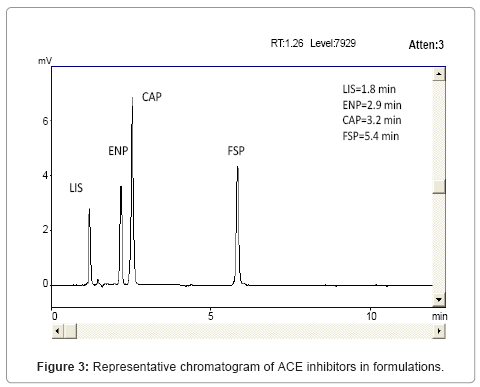 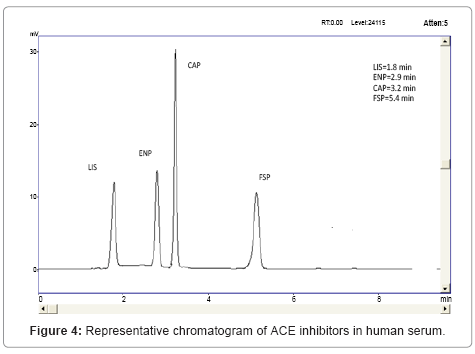 After studying all the results obtained by HPLC studies it was concluded that the present method was fast and easy to perform, having low LLOQ and LLOQ values, was found to be linear up to a wide range of analytes and showing high % of recoveries. So, this method is good for the simultaneous determination of ACE Inhibitors (lisinopril, enalapril, captopril and fosinopril) in dosage formulation. This method is used for therapeutic purpose also. Moreover, in quality control lab it can be effectively and efficiently used to save time and excessive use of chemicals by preparing single samples for all the drugs to be assayed.

Copyright: © 2013 Sultana N, et al. This is an open-access article distributed under the terms of the Creative Commons Attribution License, which permits unrestricted use, distribution, and reproduction in any medium, provided the original author and source are credited.