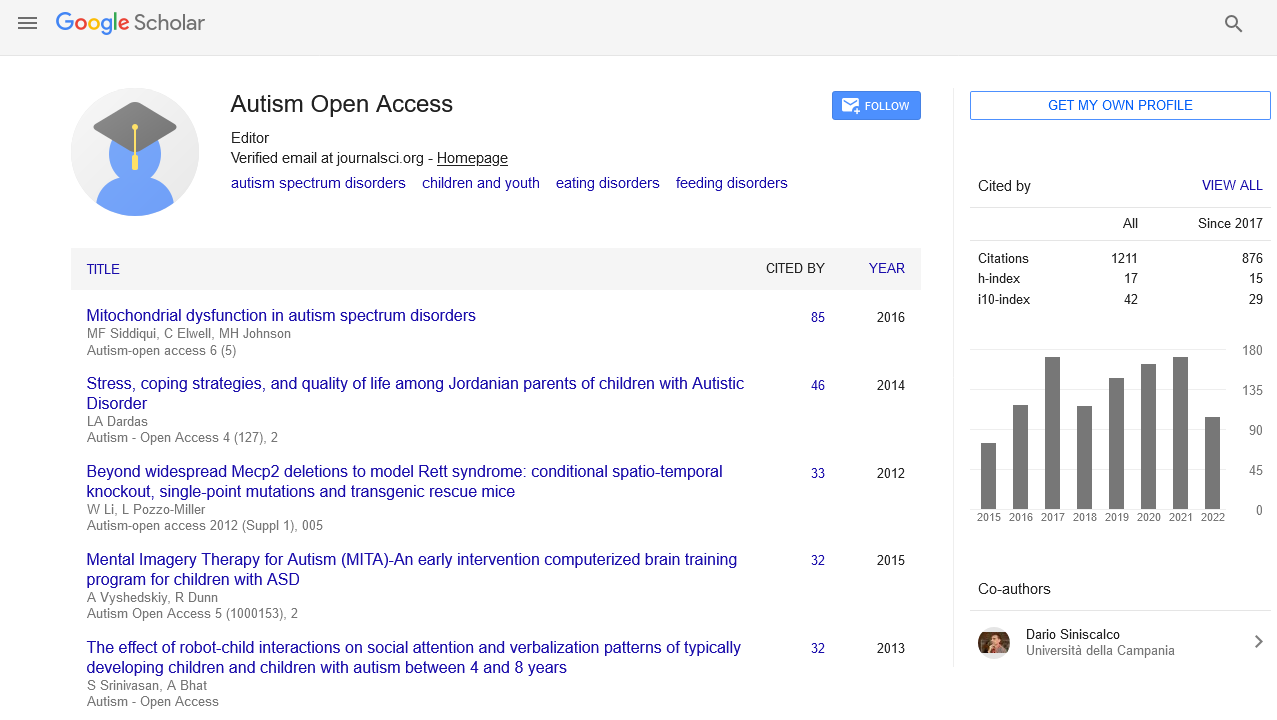 Childhood-onset cerebellar disorders have a heterogeneous presentation. It may be present as an isolated manifestation or as a part of degenerative disorders [1]. Diagnosis of cerebellar affection is usually problematic as many other rare disorders with overlapping clinical manifestations are included in the differential diagnosis [2]. The number of recognizable phenotypes associated with cerebellar manifestations are increasing as the discovery of their genetic bases is rapidly evolving [3]. Yet, the selection of the appropriate laboratory, neuroradiological, neuropathological and genetic testing for patients with cerebellar disorders remain a diagnostic challenge [4]. Neuroimaging is a crucial initial investigation that helps the selection of further proper tests [5,6]. Whole-exome sequencing provides a more specific tool for suspected inherited disorders. Receiving a proper genetic diagnosis has a significant impact on the patients' care, optimizing patients’ management, facilitating accurate recurrence risk, genetic counseling, prenatal diagnosis and potential options for family decisions [7].

Aim of the work

The current study highlights the selection of the appropriate investigations to reach specific accurate diagnoses amongst Egyptian children suffering from cerebellar disorders leading to proper management and accurate family counseling.

The current study includes 72 Egyptian children suffering from cerebellar disorders. Diagnosis of all cases was based on an MRI of the brain showing cerebellar atrophy. According to our proper clinical criteria, we were able to recognize the informative clinical data pointing to specific disorders, consequently, we could stratify our cases into clinical groups. Undiagnosed cases amongst our cohort in which we did not reach an accurate diagnosis were subjected to whole-exome sequencing. The remaining undiagnosed cases should be further subjected to whole-genome sequencing.

The current study includes 72 Egyptian children suffering from cerebellar atrophy. All the cases were recruited from the outpatient clinic of the medical genetics at the National Research Centre and the outpatient clinic for pediatric neurology at the New Kasr El Aini teaching hospital. This study was performed in line with the principles of the Declaration of Helsinki. Written informed consent was obtained from all families and the study was approved by the ethics committee of the National Research Centre. All patients had detailed proper clinical data including gender, age of onset of symptoms, age at diagnosis, mode of presentation, consanguinity, family history, and ambulatory status. Selected cases were subjected to laboratory investigation including metabolic studies (lactate and pyruvate), enzyme activity, lipid profile, Alpha feto proteins, amino acids, organic acids, and immunological studies. Electro-physiological and neuropathological studies of the gingival biopsy using electron microscopy were also done to selected cases [8].

Neuro-radiological studies specifically brain Magnetic Resonance Imaging (MRI) was done to all cases. While Magnetic Resonance Spectroscopy (MRS) was carried out for certain cases. A genetic study using WES was performed for 18 cases according to Li and Durbin [9,10].

We stratified our cases into the following clinical groups:

Sixteen cases (10 males and 6 females) with an average age of 4.4 years and a positive consanguinity rate of 87.5%. Four cases had infantile form while the remaining 12 cases showed late infantile form. They presented clinically with progressive global developmental delay, cerebellar ataxia and convulsions. Sequential MRI of the brain showed progressive cerebellar atrophy with supra-tentorial cortical brain atrophy (Figure 1). All cases were subjected to neuropathological examination in the form of electron microscopic study of gingival biopsy which showed the classic picture of membrane-bound vacuoles in the cytoplasm of the fibroblasts. These vacuoles contain curvilinear structures (Figure 2). Two of these cases were further subjected to WES, which showed two gene mutations namely IPP1 and MFSDS which confirm the diagnosis of Neuronal Ceroid Lipofuscinosis (NCL). 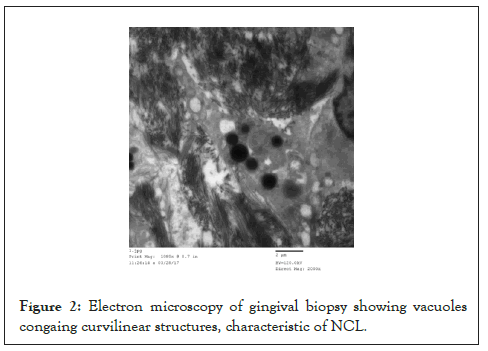 Twelve cases, (7 males and 5 females) with an average age of 3.8 years and positive consanguinity of 75%. They presented with progressive global developmental delay, hypotonia, ataxia, and slurred speech, followed by hypertonia ending in the decerebrate state associated with tonic-clonic convulsions. Brain MRI revealed bilateral supratentorial demyelination of the white matter with sparing of the U fibers (Figure 3). Laboratory investigations confirmed the diagnosis by the low level of their Aryl-sulfatase A enzyme. Nine cases (6 males and 3 females) with an average age of 2.4 years. Positive consanguinity was present in 90% of the cases. They presented with progressive delayed motor development, hypotonia followed by extra-pyramidal manifestations, and myoclonic epilepsy. All had high blood lactate levels. Brain MRI revealed bilateral cerebellar and cerebral atrophy with bilateral deep white matter demyelination and bilateral thalamic and putamen signal intensity alterations (Figure 4). Their diagnosis was confirmed by the high level of lactate in the CSF by using MRS. One case was subjected to WES which confirmed the diagnosis by identifying the disease-causing causing gene (SURF1). Eight cases (3 males and 5 females) with an average age of 4.6 years and positive consanguinity in 60% of cases. They presented by conjunctival telangiectasia, ataxic gait, oculomotor deterioration with recurrent chest infection. Their diagnosis was confirmed by elevated level of Alpha feto protein and low immunoglobulin A level. Brain MRI showed isolated cerebellar atrophy. 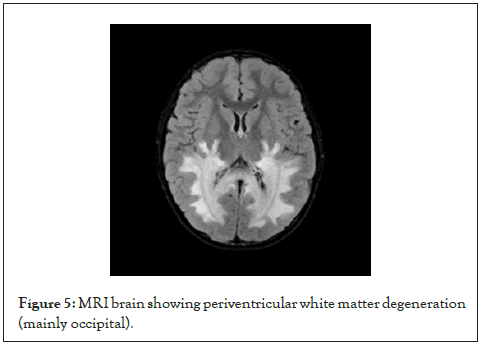 Four cases (2 males and 2 females) with an average age of 3.6 years. Presented with ataxia and delayed motor milestones. They were diagnosed through the classic MRI picture in the form of agenesis othe of cerebellar vermis (Molar Tooth).

The rest of our cohort, 18 cases, were subjected to WES. We were able to identify disease causing gene mutations in 9 cases (50%), 3 males and 6 females with an average age of 1.9 years and positive consanguinity rate of 100%. There were 7 gene mutations namely; TPP1 one case, EXOSC3 one case, PLA2G6 three cases, MFSD8 one case, MOSC2 one case, SURF1 one case and KFIA gene one case. PLA2G6 gene mutation was the most frequently mutated gene amongst our Egyptian cohort (3 cases), which showed cerebellar atrophy and hypoplasia with mild cortical atrophy on brain MRI. This is followed by 2 cases of NCL, one case showed late infantile type while the second case had infantile form. The diagnosis of these 2 cases was confirmed by the characteristic picture of the electron microscopic study of the gingival biopsy. Another case showed disease causing gene SURF1 pointing to mitochondrial disorder which was confirmed by MRS.

Childhood-onset cerebellar atrophy is caused by large heterogeneous genetic mutations. The diagnostic process is often tedious and patients undertake invasive costly investigations without always reaching a proper diagnosis. Approach to the diagnosis of cerebellar atrophy is the cornerstone for appropriate clinical management of the affected child and accurate genetic counselling for the family.

Our study presents 72 Egyptian children presented with cerebellar atrophy. On clinical examination, we were able to stratify our cases into clinical groups. NCL was detected in 22% of our cases forming the largest group which is in accordance with other reports [11].

All our NCL cases were diagnosed by finding the classical neuropathological picture of their gingival biopsy using electron microscopic study. Two of our NCL cases were confirmed by WES. In Al-Maawali, et al [1] series, 6 out of 25 cases showed the classic neuropathological picture in their conjunctiva pathology. Terracciano, et al [12] reviewed cases with cerebellar atrophy by establishing muscle biopsy to their diagnostic protocol. Therefore, gingival biopsy should be included in the protocol of the diagnosis of cerebellar atrophy in children. Our NCL cases showed specific MRI findings in the form of cerebellar atrophy and supra-tentorial cortical brain atrophy which is in accordance with other reports [6,13]. Therefore, combined neuropathological and neuroradiological findings can facilitate the selection of the appropriate further expensive investigations. Mitochondrial disorders are a common cause in our cohort which is similar to other reports [4,11]. All mitochondrial cases have specific neuroradiological findings in the form of cerebellar atrophy with extrapyramidal signs. Poretti, et al [14] categorized cerebellar atrophy as being isolated or associated with other neuro-imaging abnormalities.

Eighteen cases of our cohort were subjected to WES, and 50% showed disease-causing gene mutations [15], which is similar to other reports [13,16,17]. All previous reports did not improve the maximum diagnostic confidence above 50%. Yet, WES is rapidly being used in diagnostic neurogenetics. Even in a population with the strongest likelihood of having a genetic cause identifiable by WES, half of the patients remain undiagnosed. Even escalating to using WGS did not improve the maximum observed diagnostic confidence [18]. Adding sporadic cases further weakens the maximum potential rate for diagnosis.

The discrepancy between the observed and expected diagnostic rates supports the current diagnostic ceiling for whole-exome sequencing, subjecting that the limitations of genetic diagnosis of these patients, rest on a higher likelihood of missing pathogenic mutations which lie outside the exome and must be identified by other methods and more comprehensive whole genome-wide strategies. This emphasizes the need for continued investigations into methods to complement, synergize and extend the diagnostic utilization and value of the current next-generation sequencing. The diagnostic approach to childhood-onset cerebellar atrophy requires the integration of proper clinical information, and neuropathological and neuroradiological investigations to prioritize further genetic costly techniques.

The authors declare that no funds, grants, or other support were received during the preparation of this manuscript.

The authors have no relevant financial or non-financial interests to disclose.

Copyright: © 2022 Megahed H, et al. This is an open-access article distributed under the terms of the Creative Commons Attribution License, which permits unrestricted use, distribution, and reproduction in any medium, provided the original author and source are credited.