The salting-out effect combined with the dispersive liquid-liquid microextraction based on solidification of floating organic drop (DLLME-SFO) has been developed as a high preconcentration technique for the determination of drug in urine samples. Methadone was employed as model compound to assess the extraction procedure and were determined by high performance liquid chromatography-ultraviolet detection (HPLC-UV). In this method, initially, NaCl as a separation reagent is filled into a small column and a mixture of urine and acetonitrile is passed through the column. By passing the mixture, NaCl is dissolved and the fine droplets of acetonitrile are formed due to saltingout effect. The produced droplets go up through the remained mixture and collect as a separated layer. Then, undecanol (extraction solvent). In the second step, the 5.00 mL K2CO3 solution (2% w/v) is rapidly injected into the above mixture placed in a test tube for further DLLME-SFO. Under the optimum conditions, calibration curves are linear in the range of 2-2000 μg L-1 and limit of detection (LOD) is 0.7 μg L-1.  the collected acetonitrile is removed with a syringe and mixed with 30.0 μL-1  .The extraction recovery and enrichment factor were 83% and 140%, respectively. Repeatability (intra-day) and reproducibility (inter-day) of method based on seven replicate measurements of 100 μg L-1 of methadone were 4.1% and 5.3%, respectively. The relative recoveries of urine samples spiked with methadone are 92%-106%.

Methadone (MET) is a synthetic analgesic drug, which has been widely used for the treatment of opioid dependence since the mid- 1960s [1]. The treatment has been controversial as it replaces a shortacting opioid (heroin) with a long acting one [2]. The mechanism of action by which MET can alleviate opioid dependence and diminishing symptoms in affected individuals, have been discussed thoroughly [3]. Many analytical methods have been applied to the quantitation of MET in biological fluids. However, isolation and preconcentration of the drug have been the main challenges in the analysis of MET due to the complex matrix of biological samples and the low concentration of residual MET.

Among LLE methods, dispersive liquid-liquid microextraction (DLLME) [4] garnered considerable attention from researchers due to its fast, simple, and efficient extraction procedure, and direct injection of the extracted phase to various instruments. Up to now, DLLME has been successfully applied to the extraction of various families of organic and inorganic compounds from different matrices [5-10], and several reviews have been written on this issue [11-13]. Despite the many benefits of DLLME, the high density of the extraction solvents is its main drawback.

DLLME integrated with the solidification of a floating organic drop (DLLME-SFO) [14] has overcome the abovementioned drawbacks. It is based on an organic extractant that has lower density than water, but solidifies at near ambient temperature. After centrifugation, the test tube is cooled by inserting into an ice bath for 5 min. The enriched analyte in the floated solid phase is collected simply by a spatula and melted at room temperature; then, it is finally determined by chromatography or spectrometry methods.

The performance of DLLME-SFO was illustrated by extraction of different organic and inorganic compounds [15-18]. In the previous research, we applied DLLME-SFO for extraction and preconcentration of methadone in urine samples [19]. Despite many benefits of the DLLME-SFO, the pretreatment and dilution of urine samples is its main drawback. Because of decrease in matrix effect, urine samples should be pretreated and diluted before DLLME-SFO.

The aim of this work is the combination of salting-out effect and DLLME-SFO, as a sample-preparation method for high performance liquid chromatography (HPLC). Methadone was chosen as model analyte to investigate the feasibility of the improved salting-out- DLLME-SFO technique. To the best of our knowledge, for the first time, the salting-out-DLLME-SFO is developed and applied to the analysis of methadone in human urine without pretreatment and dilution of the samples.

Standards of MET (with a certified purity >98%) was obtained from Cerilliant (Round Rock, TX, USA) as 1 mg mL-1 methanol solution. The methadone stock standard solution was prepared in methanol at the concentration levels of 1.00 mg L-1 for MET. Afterwards, they were stored in a freezer at -20°C. Working standard solutions were prepared daily by diluting the stock solution with methanol. The ultra-pure water (six times distilled) was purchased from Shahid Ghazi Company (Tabriz, Iran). Methanol (for spectroscopy), acetone (Suprasolv for gas chromatography), acetonitrile (Hyper grade for liquid chromatography), acetic acid, sodium dihydrogen phosphate, sodium dodecyl sulfate, sodium chloride, 1-undecanol, n-hexadecane, 2-dodecanol and 1-decanol were obtained from Merck (Darmstadt, Germany). Drug free urine sample (blank) collected from healthy volunteer in our lab was used for the study. Actual human urine samples taken from two young people who were suspicious to consumption of MET were stored at -20°C and analyzed within 48 h after collection without any previous treatment or filtration.

In the first step, a 10 mL glass syringe barrel was cleaned with pure water and then a frit was placed in the bottom of the barrel and a stopcock was installed. Afterwards, 5 g of NaCl was poured into the barrel and slightly compressed with the syringe plunger. A 5.0 mL of urine sample (spiked or not with MET) was mixed with 1.5 mL acetonitrile and passed through the barrel at a flow rate of 0.5 mL min- 1. By passing the above homogenous solution through the barrel, fine droplets of acetonitrile were formed at the interface of solid (NaCl) and solution due to dissolution of salt into solution (salting-out effect). The produced droplets moved through the remained solution to top of the barrel and floated on the surface of solution as a separated layer due to lower density of acetonitrile with respect to water. During this step, the analytes were extracted into the fine droplets of acetonitrile. After passing all aqueous solution, the stopcock was closed. The volume of the acetonitrile (separated phase) on the top of remained NaCl solid was about 0.70 ± 0.03 mL. Subsequently, the organic phase obtained from the first step was transferred into a 10 mL glass test tube and 30.0 μL-1undecanol (extraction solvent) was added to the test tube. Then, K2CO3 solution (2% w/v, 5.00 mL) were rapidly injected into a test tube, using a 5.00 mL syringe (Gastight, Hamilton, Reno, NV, USA). A cloudy solution, resulting from the dispersion of the fine 1-undecanol droplets in the aqueous solution, was formed in the test tube and the mixtures were centrifuged for 5 min at 4000 g. Accordingly, the organic solvent droplet was floated on the surface of the aqueous solution due to its low density. The sample vial was there after put into an ice bath for 4 min; at this time, the floated solvent was solidified because of the low melting point (14°C). The solidified solvent was transferred into a conical glass sample cup where it was melted immediately. Finally, 25 μL of the extractant was collected with a syringe and injected onto the HPLC-UV.

In salting-out-DLLME-SFO procedure, the extraction solvent in salting-out step should be able to play the role as a disperser solvent in the following DLLME-SFO step. For this purpose, acetone, acetonitrile, methanol, and tetrahydrofuran, displaying this ability, were selected. The obtained results showed that only acetonitrile formed a two-phase system, while other solvents could not be separated from the aqueous solution by passing through a syringe barrel filled with NaCl. Therefore, acetonitrile was selected as an extraction solvent for the further studies. 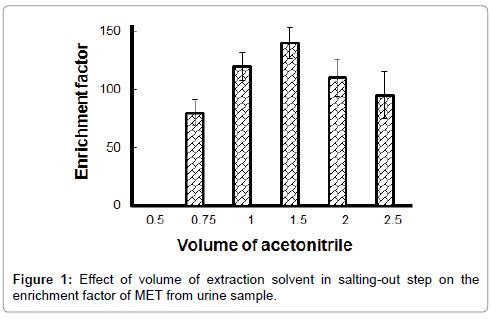 Figure 1: Effect of volume of extraction solvent in salting-out step on the enrichment factor of MET from urine sample.

Effect of the flow rate of the sample solution

The flow rate of the sample solution through the solid (NaCl) is an important factor because it controls the time of analysis and extraction recovery. The flow rate of the sample solution must below enough to perform an effective salting-out. On the other hand, it must be high enough not to waste time. The effect of the flow rate of sample solution was examined from 0.5 to 5 mL min-1. As it is illustrated in Figure 2, the flow rates up to 2 mL min-1 have no effect on enrichment factor of MET while, at higher speeds, the enrichment factor decreased. This behavior can be explained because the amount of dissolved salt in aqueous phase is decreased at high flow rates and leads to a decrease in efficiency. Thus, a flowrate of 2 mL min-1 was selected for further studies. 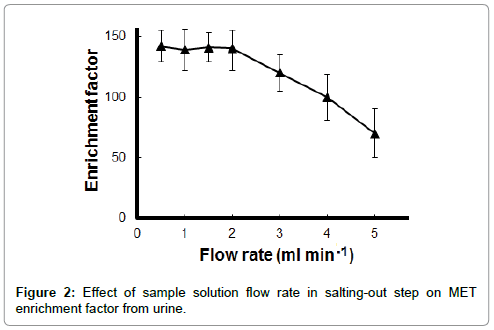 Analytical performance of the method

The optimized salting-out-DLLME-SFO and HPLC-UV procedure was validated with respect to limit of detection (LOD), precision (intraday and inter-day), linear range (LR), EF, and ER. Table 1 summarizes the analytical characteristics of the optimized method. The repeatability (intra-day) and reproducibility (inter-day) were studied by extracting the spiked urine samples (100 μg L-1 for MET). The repeatability and reproducibility were calculated and were 4.1% and 5.3%, respectively. Determination coefficients (r2) was 0.988. Good linearity 2-2000 μg L-1 were obtained. The limits of detection, based on a signal-to-noise ratio (S/N) of 3, were 0.7 μg L-1. Moreover, the EF and the ER of MET were 140 and 83%, respectively.

Analysis of MET in real samples 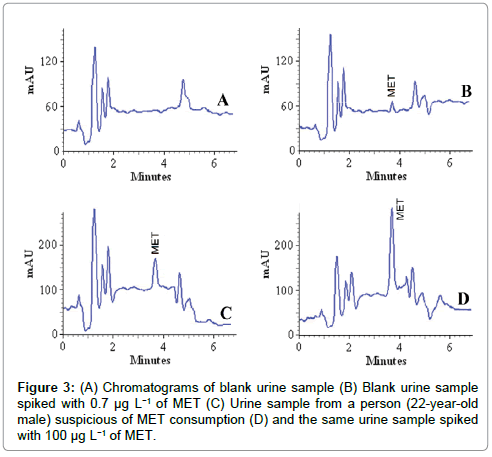 Table 2: Analysis of blank and actual urine samples for determination of MET.

In this study, the salting-out effect was combined with the DLLMESFO technique for the determination of MET in urine samples prior to analysis by HPLC-UV. This combination not only resulted in a high enrichment factor, but also it could be used in complex matrices (such as urine, fruit juice and highly saline solution) without any pretreatment or dilution. As compared with the other sample preparation methods, the analytical procedure offered numerous advantages such as simplicity, ease of operation, high preconcentration factor, low detection limit and relatively short analysis time. Although the obtained results in this work are related to determination of MET, the system could be readily applied for the determination of other drugs from complex biological and pharmaceutical matrices, using different analytical instruments.

The authors thank the Deputy of Research and Technology, Kermanshah University of Medical Sciences, Kermanshah, Iran for financial support.

Copyright: © 2016 Akramipour R, et al. This is an open-access article distributed under the terms of the Creative Commons Attribution License, which permits unrestricted use, distribution, and reproduction in any medium, provided the original author and source are credited.