Solid phase microextraction coupled to headspace sampling and GC/MS technique was applied to the characterization of the volatile components of several Cannabis preparations (hashish). Different parameters of the analytical method (fiber, coating thickness, sampling and exposition temperatures, sample preparation) were evaluated to optimize the characterization of the volatile components. a-Pinene, ß-myrcene, limonene, 4-carene, trans-3(10) caren-2-ol, 4,7,7-trimethylbicyclo [4.1.0] heptan-3-ol, caryophyllene, ß-humulene, azulene, gurjunene, ledene and caryophyllene oxide were identified among the volatile components of all hashish preparations. Moreover, a suitable internal standard (nonane) was chosen, the reproducibility and linearity of the method were evaluated in order to carry out the quantitative determination of caryphyllene, the most abundant volatile terpene. Its quantity ranged from 800 to 3000 µg/g.

Cannabis preparations (marijuana and hashish) are still among the most consumed illicit drugs worldwide, due to their low price and the commonly considered low social impact. Hashish is the sticky resin produced by the Cannabis female flowers and it is particularly rich of psychoactive principles [1,2]. The biologically active compounds are a group of terpenoid secondary metabolites, called cannabinoids. Among them, the main constituents are cannabidiol (CBD), cannabinol (CBN) and μ-9-tetra-hydrocannabinol (μ-9-THC) [3,4]. Hashish looks like a hard yellowish-brownish paste that becomes malleable upon heating and different samples can present a high variety in terms of color, density, content of the active principles and flavor [1]. Besides the biologically active cannabinoids, more than 90 phytocannabinoids have been isolated from Cannabis and its essential oil is a complex mixture containing also monoterpenoids and sesquiterpenoids [5-8], giving it the typical organoleptic properties. The volatiles constituents of Cannabis have been extensively studied [9] because they represent a potential for chemically fingerprinting different cultivars [10]. On the other hand, less attention was dedicated to the volatile components of hashish, despite the fact that they could be very useful for characterizing the different preparations and for establishing the origin and eventual links between different seizures [2]. In this frame, we were interested in analyzing the volatile components of different hashish preparations seized by the judicial authority and delivered to our laboratory for the determination of the content of cannabinoids [11]. For this purpose, we chose solid phase microextraction [12] coupled to headspace sampling, which is based on the adsorption of the volatile analytes by the coating of a suitable fiber and their direct injection into a GC/MS system. This method shows several advantages respect to liquid-liquid extraction (LLE), because it is more selective, less time consuming, it does not require the use of solvents and it is particularly suitable for volatile analytes [13]. Different parameters of the analytical method (fiber, coating thickness, sampling and exposition temperatures, sample preparation) were evaluated to optimize it for the determination of the volatile components of hashish, in particular, the parameters were studied taking into account azulene and caryophyllene, two significant representatives of the monoterpene and sesquiterpene classes present in hashish (Figure 1). Moreover, the quantitative determination of caryophyllene, the most abundant component was carried out choosing nonane as internal standard (IS). 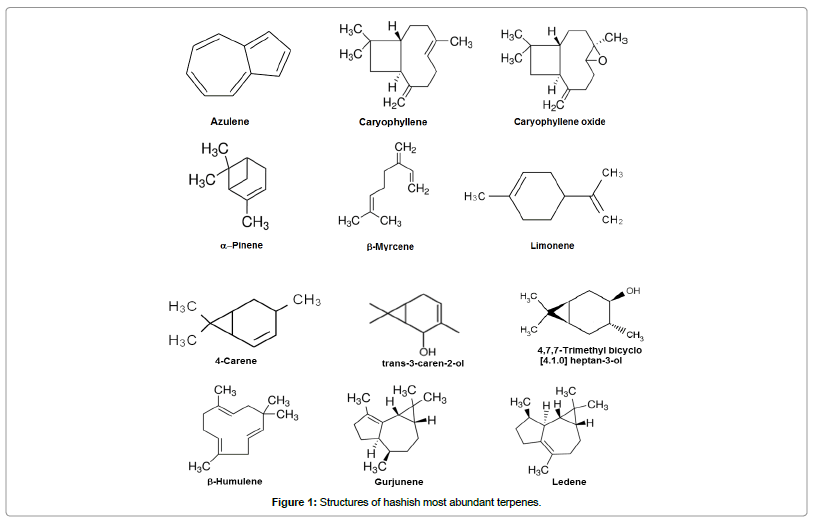 Methanol was obtained by Baker (Deventer, The Netherlands).

Seven different hashish samples were taken into account, seized by the judicial authority and delivered to our laboratory for the determination of the cannabinoid content [11]. The characteristics of the different preparations together with the content of THC, CBD and CBN are reported in Table 1.

Table 1: Characteristics of the different preparations and content (%,w/w) of THC, CBD and CBN.

Sample 3 was used to evaluate method repeatability and it was considered as a reference because it was the most abundant sample and it was particularly aromatic, soft and malleable and it had a gold punching as a mark of quality.

A slice was cut from every preparation, frozen and finely chopped. 10.0 mg were weighed, put in a 20 mL headspace vial and immediately sealed using a silicone/PTFA septum and a magnetic cap. Before the analysis 10 μL of the IS standard solution (70 mg) were added by a microsyringe.

Solid phase microextraction coupled to headspace sampling is based on the adsorption of the volatile analytes by the coating of a suitable fiber and their direct injection into a GC/MS system. The sample vial was equilibrated at 80°C for 5 min. For adsorption, the needle of the SPME device containing the extraction fiber (SPME fiber assembly polyacrylate df 85 μm, Supelco, Sigma Aldrich, Steinheim, Germany) was inserted through the septum of the vial and the fiber was exposed to the headspace in the vial for 5 min. Finally, the SPME fiber with the absorbed compounds was introduced into the injection port of the GC/ MS for 5 min to accomplish complete desorption of the analytes.

We were interested in analyzing the volatile components of different hashish preparations seized by the judicial authority and delivered to our laboratory for the determination of the content of cannabinoids (Table 1), in order to characterize the different preparations and to establish the origin and eventual links between different seizures.

For this purpose we chose solid phase microextraction coupled to headspace sampling, which shows several advantages because it is more selective, less time consuming and it is particularly suitable for volatile analytes. Different parameters of the analytical method were evaluated to optimize it for this kind of determination. Sample preparation was investigated and we decided to carry out the extraction on the vegetable material as it was without adding a solvent. In this way, the aromatic and volatile component of the hashish preparations is preserved and the chromatograms obtained do not show the peak of the solvent but only peaks related to the matrix. Due to the high sensitivity of this technique, we decided to use 10 mg of hashish preparations.

Three different fibers were evaluated: two of them with a polydimethylsiloxane (PDMS) non polar coating but with a different thickness, respectively 100 μm and 7 μm; the third with a polyacrilate (PA) polar coating and a thickness of 85 μm. These three fibers represent a pool recommended by the suppliers for the analysis of a wide range of analytes; in particular, low molecular weight or volatile compounds usually require a 100 μm polydimethylsiloxane (PDMS)- coated fiber. Larger molecular weight or semivolatile compounds are more effectively extracted with a 7 μm PDMS fiber. To extract very polar analytes from polar samples, an 85 μm polyacrylate-coated fiber is required. The thickness of the coating also show an influence on the extraction of the analytes: thicker coatings favor the adsorption of low molecular weight volatiles, while lower thicknesses adsorb preferentially semivolatile analytes.

Five different adsorption times (2, 4, 6, 8 and 10 min) and temperatures (60, 70, 80, 90 and 100°C) were taken into account. The adsorption of two representative terpenes (the monoterpene azulene and the sesquiterpene caryophyllene, Figure 1 in the volatile portion of hashish samples was considered.

Heating favors the evaporation of the volatile analytes from the vegetable material, so the higher the temperature, the higher the vapor pressure of the analyte and consequently the adsorption should be. Temperatures higher than 100°C were not tested because some terpenes are not stable. The different classes of terpenes show different boiling points and consequently adsorption profiles: monoterpenes, such as limonene (b.p.=175,5-176,5°C) are more volatile and an excessive increase of the temperature leads to the desorption from the fibers. On the other hand, sesquiterpenes such as caryophyllene (b.p.=262°C) need a higher temperature to pass to the vapor phase, but above a certain temperature, the desorption process became predominant.

The curves obtained demonstrated that 80°C is the best adsorption temperature for caryophyllene, in the case of azulene, the maximum of adsorption is reached at about 90°C, but it is high also at 80°C, so we decided to set the adsorption temperature at 80°C. As regard as the time of adsorption, 5 min resulted to be the most suitable time. In fact lower times do not allow the establishment of the adsorption equilibrium, higher times likely bring to the desorption of the less adsorbed analytes. So the optimal adsorption conditions were 80°C for 5 min. On the basis of the results obtained reported in Figure 2, the 100 μm PDMS fiber was chosen, because the area of both caryohyllene and azulene resulted higher, indicating a higher adsorption of the analytes.

To evaluate the reproducibility of the method a suitable internal standard was needed. To this end, Kovats retention index (KI) of a series of terpenes evidenced in the analysis of hashish preparations were calculated. As the Kovats index is related to the retention time of the analyte normalized to the retention times of adjacently eluting n-alkanes, decane, dodecane, tetradecane, hexadecane, octadecane and icosane were injected by an autosampler in the same chromatographic conditions used for the analysis of hashish volatile components. THC, CBD and CBN were also analyzed and identified in the hashish volatile components by means of their Kovats retention index. The Kovats retention indices obtained for the most abundant peaks of the volatile components of hashish preparations are reported in Table 2, together with the values obtained for the series of linear alkanes, THC, CBD and CBN. Limonene, β-ionone, trans-pinane, nonane and methyl oleate were taken into account as possible internal standards.

To evaluate the reproducibility of the method different analyses were carried out withdrawing six samples from the same portion of the stick of hashish (sample 3) or from different portions of the same stick. The area of the peaks related to caryophyllene, the most abundant component were compared (Table 3).

Table 3: Reproducibility of the method evaluated on sample 3.

Percentage coefficients of variation show that the method has a good reproducibility, this is particularly important for this kind of vegetable material, which has a lower degree of homogeneity, respect to other kind of matrices. 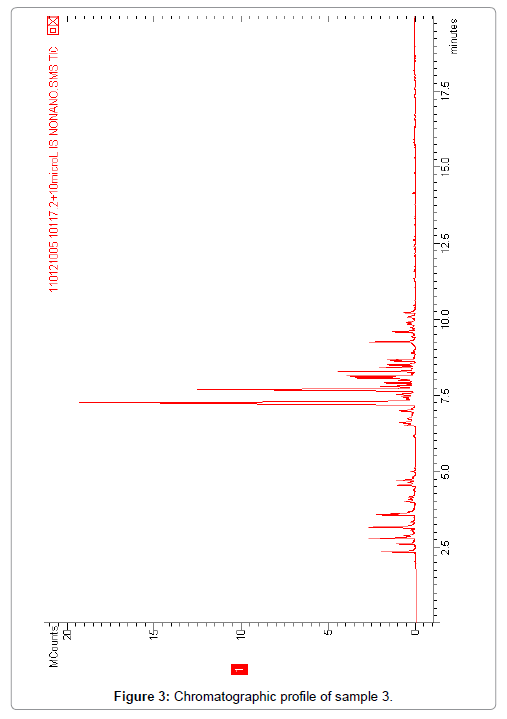 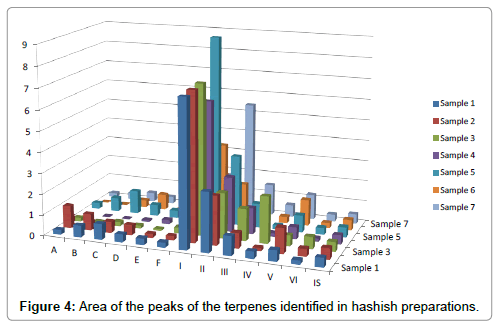 Figure 4: Area of the peaks of the terpenes identified in hashish preparations.

Table 4: Area of the peaks of the terpenes identified in hashish preparations. 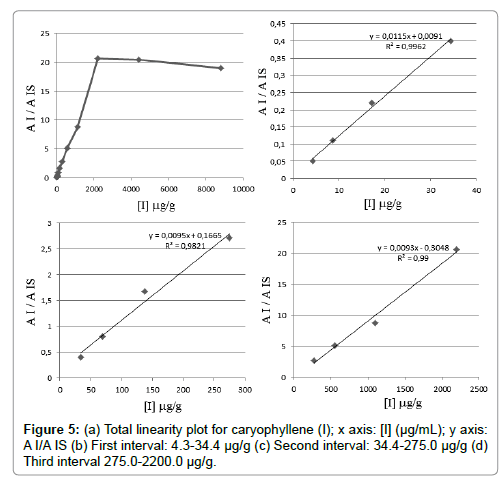 Table 5: Content of caryophyllene (I, μg/g) in the different Hashish preparations.

The HS-SPME-GC/MS method studied herein allows the rapid and reproducible determination of the volatile components of Cannabis. This analysis could be particularly useful for the characterization of Cannabis preparations (hashish) and to establish the region of origin and eventual links between different seizures. To this end, the parameters of the SPME and of the analytical method were optimized using azulene and caryophyllene, two representative terpenes of hashish. Ten different hashish preparations were analyzed and the quantitative determination of caryphyllene, the most abundant component was carried out, using nonane as internal standard.

Copyright: © 2017 Arnoldi S, et al. This is an open-access article distributed under the terms of the Creative Commons Attribution License, which permits unrestricted use, distribution, and reproduction in any medium, provided the original author and source are credited.