Heart Failure (HF) remains one of the most prevalent and challenging medical conditions. Despite guideline – based therapy, HF is associated with high morbidity and mortality rates; such a way that 80% of men and 70% of women aged 65 years or above die within 8 years after the initial diagnosis. HF is also one of the most costly medical conditions [1]. This deleterious condition is associated with progressive ventricular dysfunction and cardiac remodeling [2]. Changes in cardiac structure and function often occur before the symptoms appear, resulting in difficulty in prediction of clinical outcomes. Thus, many patients require specialized imaging techniques, such as cardiac magnetic resonance imaging, which are not always available [3]. Risk factors, such as age, diabetes, and smoking, and severity of symptom are indicative of at risk patients, but are not enough to risk stratify patients [4]. The disease may even progress in the patients who are under treatment; therefore, it is necessary to monitor these patients during the course of treatment. HF biomarkers have growing importance in daily clinical practice as well as in clinical trials. Biomarkers can help in monitoring of response to therapy, prediction of patients outcome in clinical practice, and appropriate patient stratification [5]. Several biomarkers are used for diagnosis and prognosis of HF patients. Recently, Galectine-3 has been proposed for diagnosis and prognosis of HF patients. Galectine-3 is a product of active macrophages and plays a pivotal role in pathogenesis of remodeling, including inflammation and fibrosis in HF patients [6] so in this study we aimed to determine the relationship between galectine-3 level and left ventricular cardiac functions in patient with chronic heart failure and its correlation with clinical picture.

All the patients were subjected to

A. Clinical assessment including: (Signs and symptoms of heart failure and detection of cardiovascular risk factors such as DM, hypertension, age and positive family history).

Twelve leads resting ECG were done for all patients to detect rhythm, detect any ischemic changes or arrhythmias.

Random blood glucose: Glycaemia was determined with the method of glucose oxidase.

Lipid profile: Cholesterol and triglycerides were determined utilizing a standard enzymatic process. HDL was determined enzymatically after the precipitations of the other lipoproteins with dextran magnesium sulphate.

Plasma Gal-3 assay: The EDTA blood sample was centrifuged 1000 xg for 15 minutes and plasma was frozen at -20 c. Plasma concentrations of Gal-3 were detected by an enzyme-linked immunosorbent assay kit [Bioscience American). Procedure and calibration of assay was performed according to the manufacturer's protocol [6].

Briefly, plasma Gal-3 was bound to the anti-Gal-3 antibody, that was adsorbed into micro-well plates and was captured with a secondary antibody anti-Gal-3 bio-tilinated [Sandwich method), that was revealed through the HRP-streptavidin exposed to TMB substrate. The colorimetric reaction was measured at 450 nm using an enzyme-linked immunosorbent assay [ELISA) plate reader. Measurements were performed in duplicate and the results were averaged. The standard curve ranged between 0.47 ng/ml to 30.00 ng/ml. The limit of detection was 0.99 ng/ml and the reproducibility coefficient of variation of intra-assay and inter-assay were 3.3% and 6.8% respectively [9].

E. Statistical analysis The data were tested for normality using the Anderson-Darling test and for homogeneity variances prior to further statistical analysis. Categorical variables were described by number and percent [N, %), where continuous variables described by mean and standard deviation [Mean, SD]. Chi-square test and fisher exact test used to compare between categorical variables where compare between continuous variables by t-test and Independent-Samples T test ANOVA. A two-tailed p<0.05 was considered statistically significant. We are used person and spearman correlation to appear the association between variables. All analyses were performed with the IBM SPSS 20.0 software (The IBM Corp). 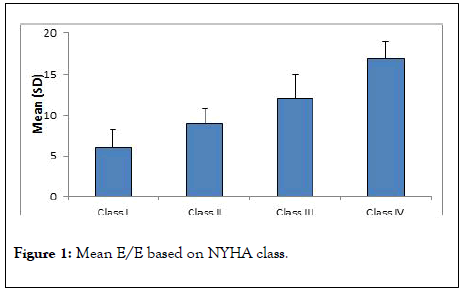 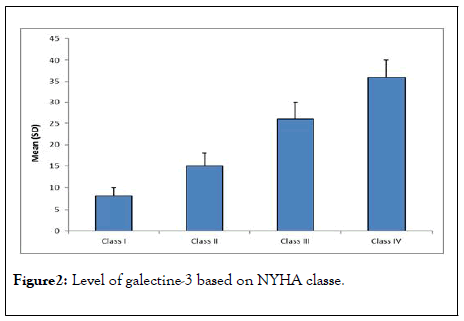 Figure 2: Level of galectine-3 based on NYHA classe.

Level of galectine-3 is not affected with the associated risk factors in the patients. As shown in (Table 3), There is no correlation between (DM, dyslipidemia, smoking, family history, IHD and hypertension) and level of galactin-3, P value <0.05 Table 3.

Our observations revealed that Galectine-3 can predict the symptoms of heart failure (NYHA) with sensitivity 98% and specificity 94% at cut off point 20ng/ml, (Table 4), it also could predict impaired filling pressure (E/Ea) with sensitivity 91% and specificity 100%, (Table 5). On the other hand, ejection fraction cannot predict neither the severity of symptoms nor the filling pressure in patients with heart failure (Tables 4 and 5).

Table 4: Accuracy of gelectin-3 and LVEF in diagnosis of advanced NYHA class.

Table 5: Accuracy of galectine-3 and LVEF in prediction of E/Ea grade.

This study aimed to determine the relationship between Galectine-3 levels and the echocardiographic indices corresponding to various stages of LVEF. At the outset, Gal-3 has been proved to be effective in the diagnosis of patients suffering from diastolic dysfunction. This study provides useful information corroborating the association between LV structure, LV filling pressures (E/Aratio) and the varying degrees of diastolic dysfunction with Gal-3 level, essentially mirroring the hypothesized link between cardiac fibrosis, hypertrophy, and evolving heart failure.

The main findings of our study is the significant correlation between level of Gal 3 with severity of symptoms in patients with heart failure and with the filling pressure (diastolic dysfunction) E/Ea (r= 0.90; P<0.001), which highlights the diagnostic and suspected prognostic significance of level of Gal 3 in patient with CHF independent on their systolic function, we also found more significant correlation between Gal 3 and E/Ea' (r= 0.70; P<0.001), and NYHA class. This findings are in consistent with [10], which found that The mean level of galectine-3 in blood plasma in the group with CHF and preserved EF was significantly higher than in the group with CHF and reduced EF so they suggest that Galectine-3 can be used as a diagnostic biomarker primarily in patients with HFrEF and HFpEF. In agreement with our findings, Hakan et al. [11], reported also a positive correlation between plasma galectine 3 concentration and clinical NYHA stage-i.e, as the clinical stage of disease increases, the galectine-3 level also increases. Thus, they suggested that plasma galectine-3 concentration can be used as a biomarker to aid clinical staging and severity assessment of heart failure. Currently, the potential mechanisms underlying the potential prognostic role of galectine-3 in AHF remain unclear. Pathophysiologically, galectine-3 is a beta- galactoside – binding lectin that can be secreted by macrophages, monocytes, and epithelial cells [12]. Galectine-3 has been confirmed to mediate myocardial fibrosis, ventricular remodeling, and cardiac oxidative stress and ischemia-related damages induced by hypertension, diabetes, and coronary artery diseases [13-15]. In cardiomyocytes and animal models of cardiovascular diseases, inhibition of galectine-3 was shown to exert therapeutic efficacy by attenuation of ventricular remodeling and myocardial apoptosis [16].

We also demonstrated that there was no significant correlation between Gal 3 and systolic function (r=-0.07; P= 0.49). This results is in consistence with a survey conducted by Wilson et al. [17] on the patients with coronary disease which demonstrated the lack of a strong relation between galectine-3 and echocardiographic measurements of cardiac structure and function in chronic stable systolic HF.

The study results suggested plasma galectine-3 concentration can be used as a biomarker to aid clinical staging and severity assessment of heart failure.

Copyright: Â© 2020 Elsaughier SM, et al. This is an open-access article distributed under the terms of the Creative Commons Attribution License, which permits unrestricted use, distribution, and reproduction in any medium, provided the original author and source are credited.