Assessment of Probiotic Properties of Some Bacteria Isolated from Dairy Products

Objectives: A study was undertaken to isolate bacteria from fermented dairy products and evaluate their probiotic potential.

Methods: From the colonies formed on MRS agar plates, 8 bacterial isolates were selected and evaluated for their anti-microbial and cholesterol assimilation capability.

Probiotics are defined as microorganisms that are believed to provide health benefits when consumed [1]. These bacteria are considered as ‘Generally Recognized as Safe’ (GRAS) organisms and are used in the preparation of fermented food products [2]. Probiotic is usually a dairy food or a dietary supplement containing live bacteria that replace or add to the beneficial bacteria normally present in the gastrointestinal tract of man and animal.

Probiotic bacteria exert several health benefits to the consumer in several ways: Improvement of the health of intestinal tract, enchantment of the immune system, synthesis and enhancement of the bioavailability of nutrients, reduction of the lactose intolerance, decrease of the prevalence of allergy in susceptible individuals, and reduction of the risk of certain cancers [3].

Isolation of Lactic acid bacteria (LAB) was done using the MRS (de Man, Rogosa and Sharpe) agar medium. One gram of sample was added to 9 mL of physiological saline (0.9% NaCl) and mixed well. This sample suspension is then serially diluted up to 105 times and 0.1 mL sample from each dilution was plated onto MRS agar medium 0.5% CaCO3 (pH 6.2 ± 0.2). The plates were incubated at 37°C for 24 h. The clear zone forming discrete colonies were counted and selected for further study.

Identification of the isolates

Growth rate of bacterial cultures was determined in MRS Broth containing different levels of bile bovine, (Sigma, USA) (0.5, 1, 1.5 & 2%). Freshly prepared cultures were inoculated (1%) into medium and incubated at 37°C for 24 hours under anaerobic condition. Optical density of each sample was measured using a spectrophotometer at 560 nm against uninoculated broth (0%) [8].

For pH tolerance assay, 100 μL of fresh culture was inoculated into 10 mL MRS broth with varying pH ranging from 2, 3, 4, 5, 6 and 8. The pH was adjusted with concentrated hydrochloric acid (HCl) and 0.1N sodium hydroxide (NaOH). The inoculated broth was incubated in anaerobic condition for 24 hours at 37°C. After incubation, growth of the bacteria was measured using a spectrophotometer at 560 nm against uninoculated control broth.

For the determination of NaCl tolerance, each isolate was grown in MRS broth containing six test tubes that were adjusted the concentration of NaCl (0%, 1%, 2%, 3%, 4%, 5% and 6.5%) After autoclave, each test tube was inoculated with 100 μL overnight culture of the isolates and incubated anaerobically at 37°C for 24 hours. After incubation, the bacterial growth was measured using spectrophotometer at 600 nm against uninoculated control broth [9].

Antimicrobial activity is one of the most important selection criteria of probiotics. Agar-well diffusion assay was used to determine the antimicrobial activity of the isolated LAB [10]. Bacterial strains belonging to both gram-positive and gramnegative groups such as Staphylococcus aureus ATCC 6538, Escherichia coli ATCC 35150 Salmonella enteritidis ATCC 13076, Listeria monocytogenes ATCC 7644 were used as test organism.

The LAB isolated from fermented dairy products were grown in MRS broth and the culture filtrate was collected by centrifugation of the culture. Then 30 μl supernatant was poured into the well (6 mm diameter) of Mueller Hinton Agar (MHA) containing test bacteria. The plates were incubated at 37°C for 24 hours. The zone of inhibition measured in nearest mm.

The human blood was collected from healthy individuals and centrifuged at 2500 rpm for 15 minutes. The supernatant was separated and the potential LAB isolates were separately inoculated in each tube except the control tube and anaerobically incubated for 24 hours at 37°C. After the incubation, the culture was centrifuged at 10000 rpm for 15 minute and supernatant was collected for measuring the cholesterol assimilation by the isolates following the method described by Rudel and Morris [11].

Morphological and cultural characteristics of the isolates

Eight bacterial isolates which formed clear zone on MRS Agar +0.5% CaCO3 medium and were non-motile and catalase negative were selected and purified for further study. The morphological and cultural properties of the isolates are presented in Table 1. 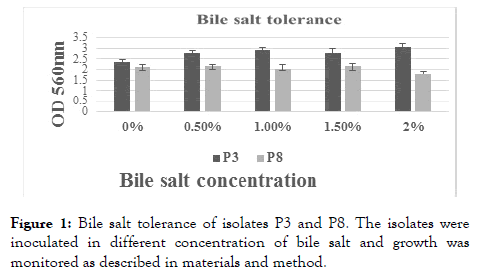 Figure 1. Bile salt tolerance of isolates P3 and P8. The isolates were inoculated in different concentration of bile salt and growth was monitored as described in materials and method. 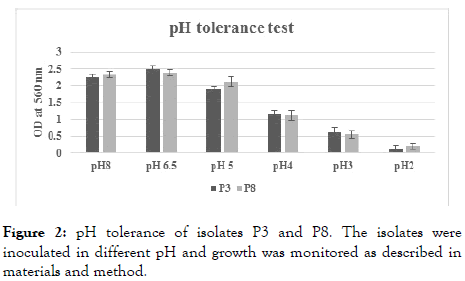 Figure 2. pH tolerance of isolates P3 and P8. The isolates were inoculated in different pH and growth was monitored as described in materials and method.

Table 2: Biochemical and physiological characteristics of the isolates. *+=Poor growth and ++=moderate growth.

Figure 3. Cholesterol lowering capacity of isolates P3 and P8 as described in materials and method.

In this study attempt was taken to isolate LAB from dairy products and assess their anti-bacterial activity and the ability to assimilate cholesterol. The randomly selected 8 isolates were further purified and the morphological, cultural and biochemical properties of two isolates (P3 and P8) were studied. According to Xanthopoulos et al. [12] the ability to tolerate bile salts varies a lot among the LAB species and between strains themselves. Bile resistance of some isolates is related to the activity of bile salt hydrolase (BSH) that helps to hydrolyze conjugated bile, reducing its toxic effect [13]. BSH activity has most often been found in microorganisms isolated from the intestines or feces of animals [14]. The capacity to survive in the gastrointestinal tract by tolerating and colonizing at low pH in stomach (up to pH 3), higher pH in small intestine (like pH 8) and higher bile salt (up to 2%), are important features of probiotics. 8 isolates showed low pH tolerance and survival in the presence of bile salt even after 24 h of incubation. Liong and Shah [15] reported survival of LAB in the presence of high concentration of bile salt. The finding of this research also corroborates the findings of Guo et al. [16] where LAB isolates survived the presence of 0.3% Oxgall.

Isolates (P3 and P8) showed antibacterial activity against four bacterial strains which fulfills another criterion to be used as those isolates as probiotics. Through this finding it may be concluded that the isolated LAB may be used to prevent foodborne bacteria and improve the microflora of gastro-intestinal tract [17].

The use of probiotics in reducing serum cholesterol levels has attracted much attention since blood cholesterol reduction through dietary modification is preferred over drugs. Isolate P3 and P8 showed significant assimilation of cholesterol. Isolate P3 assimilated 41.92% cholesterol. This ability is higher than previously reported L. lactis subsp. Lactis LQ. The cholesterol assimilation capable isolates may be used as oral supplement which may prevent the hypercholesterolemia and reduce the coronary heart disease as well. Although findings of this study in appreciable but it will be wise to use these isolates as probiotic after double-blind trial using human subjects.

Copyright: ÃÂ© 2019 Rahman MR, et al. This is an open-access article distributed under the terms of the Creative Commons Attribution License, which permits unrestricted use, distribution, and reproduction in any medium, provided the original author and source are credited.