Background: Assessment of pain in emergency settings can be difficult, particularly in young children. However, it is essential to the appropriate management and treatment in children. Objective: To assess pain levels in pediatric patients admitted to an emergency department using standardized pain assessment tools. Methods: Descriptive, cross-sectional study of 1840 children hospitalized in the Emergency and Poison Control Department of the Vietnam National Children’s Hospital in Hanoi, Vietnam from 12/2014 to 3/2015. On admission and again at 6 hours, nurses or physicians assessed pain levels using the Wong-Baker Faces scale for children < 3 years and the FLACC score for children >3 years of age. Time of first analgesic administration (paracetamol or opioids) and basic demographic data were prospectively recorded on standard datasheets. Results: We enrolled 1840 children (66% male, 34% female) during the 4 months study period. Of this total, 1221 (66.7%) were 1 months to 3 years in age. On admission, no pain was noted in 356 (19.3%), mild pain in 746 (40.5%), moderate pain in 681(37%), and severe pain in 42 (2.3%). On admission, the mean pain score was (2.92 ± 1.94 on admission. After 6 hours, 820 (44.6%) children were pain-free and 755 (41%) had mild pain, with mean pain scores of 1.59 ± 1.79. Analgesics were not administered to children with no pain; analgesics were administered to 3.8% and 26% of patients with moderate or severe pain, respectively. There was no difference in the pain level by age groups or gender. Only 2.3% patients received analgesics, all of these had moderate or severe pain scores. Conclusions: Pain scales are useful in stratifying pain in children so that analgesics can be appropriately administered to those with the most acute pain. Pain scores can guide emergency physicians to treat nonverbal patients most in need of analgesics.

According to the International Association for the Study of Pain – IASP - 1994, “pain is an unpleasant sensory and emotional experience associated with actual or potential tissue damage, or described in terms of such damage” [1].

Pain is a critical symptom in many illnesses. “Pain- 5th Vital Sign” was a call to routinely assess pain in just as the other four vital signs such as temperature, heart rate, respiratory rate, and blood pressure are assessed [2]. In response, assessment of pain has become standard of care in developed countries by means of a variety of analog numeric or pictorial scales. Little is known about the use of pain assessment tools in the developing world.

The detection of pain is a pressing need in emergency care for children unable to quantify the level of pain that they experience. Pain has often been underestimated and undertreated in children for many years [3], and therefore children may be undertreated. Delayed management of pain in children has short- and long-term deleterious effects, including heightened pain perception, and increased morbidity and mortality [4-6]. Alternately, children might receive analgesics unnecessarily.

In Vietnam, there are few studies on pain assessment and pain management in children. We conducted a study to characterize pain levels in children admitted to the emergency department of a nationallevel tertiary referral hospital in northern Vietnam.

This was a prospective, cross-sectional study of a convenience sample of pediatric patients admitted to the Emergency Department of the Vietnam National Children’s Hospital in Hanoi, Vietnam during a 7 month period from 12/1/2014 to 3/31/2015. The hospital is a nationallevel, tertiary referral center for pediatric patients from a 31 million catchment population for most of northern Vietnam. Parents of children age 1 month to 12 years gave written informed consent; adolescents over the age 12 provided their own written informed consent. Children who were in a coma, mentally retarded, receiving chronic analgesic therapy or who had had a sedative or analgesic administered within 6 hours prior to admission were excluded. No approach was made if the patient was predicted to die the ED or within 6 hours of admission.

All participants were assessed according to one of two easily administered age-specific pain scales on admission to the emergency department: The FLACC score (Figure 1A) for children less than 3 years old [7,8] and the Wong-Baker scale (Figure 1B) for children over three years of age [9]. Pain level was again assessed 6 hours later using the same scale. Pain levels were considered mild (score=1-3), moderate (score 4-6), or severe (7-10). Pain scores, administration of analgesics (Paracetamol or opioids), and basic patient demographic data were recorded concurrently on a standardized data entry form. Figure 1: Pain scales for children less than and greater than three years of age; A. pain scale by Wong-Baker; B. the FLACC pain scale.

On admission, 19.8% of the entire sample had pain scores of zero, while 40.5% received scores indicating mild pain. Moderate pain was recorded in 37%; only 3.1% were scored as having severe pain. Only 42 (2.3%) received an analgesic during the six-hour period in the emergency department. As expected, there were statistically significant differences in the frequency of analgesic administration as pain scores increased: One (0.1%) of 746 patients with mild pain, 26 (3.8%) of 681 patients with moderate pain and 15 (26.3%) of patients with severe pain (p<0.001). 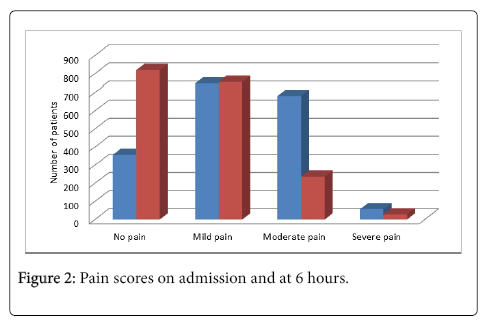 Figure 2: Pain scores on admission and at 6 hours. 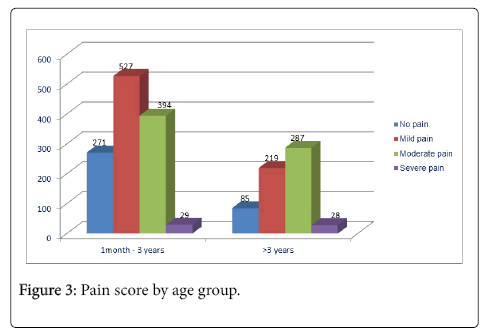 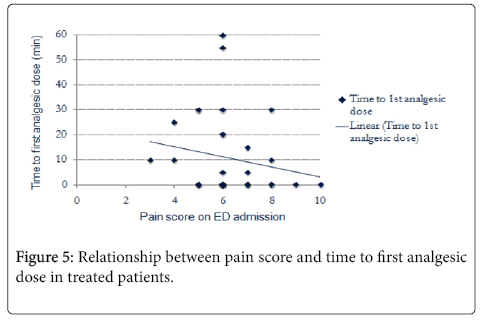 The large number of young children unable to communicate their experience of pain is a problem for emergency physicians. Recognition of pain may be facilitated in young children by the use of ageappropriate standardized scales. Pain scores can be used to identify non-verbal children who need analgesia. They can also help minimize the risks of over-treatment with analgesics in patients with milder pain who could respond to other pain management methods.

The frequency of analgesic administration was significantly related to pain scores, suggesting that analgesics were administered to those with higher perceived pain. However, overall the number of patients receiving pain management was very low (42/1840 (2.3%)). However, only 26% of patients with severe pain received analgesia, suggesting that the recognition of pain does not necessarily prompt medicating patients likely to benefit from analgesia. Even when pain is recognized, appropriate analgesia is often not provided. Thus, pain scores do not necessarily trigger providers to prescribe analgesics even when pain is assessed as severe. When an analgesic is administered, the time to first dose is shorter for high pain scores (moderate or severe pain), suggesting that emergency physicians who decide to prescribe an analgesic recognize the need to relieve pain promptly. There was an unequal, but not atypical, sex distribution in this sample, as in other reports [11,12], but there were no differences in pain scores by sex. This suggests that there is no preferential administration of analgesics according to the child’s sex.

Pain scales are an inexpensive method to improve pain management in pediatric emergency settings where healthcare resources are limited. Further training in pain management could increase physicians’ willingness to provide analgesia when pain scores indicate a need for pain relief. Analgesics can be better directed to children with higher levels of pain, at the same time decreasing risks of overtreatment in those children who may not need analgesia.

Copyright: © 2017 Do VQ, et al. This is an open-access article distributed under the terms of the Creative Commons Attribution License, which permits unrestricted use, distribution and reproduction in any medium, provided the original author and source are credited.