Voriconazole used for Treatment of Tracheobronchial Aspergillosis: A Report of Two Cases

Voriconazole used for Treatment of Tracheobronchial Aspergillosis: A Report of Two Cases

Tracheobronchial aspergillosis mainly involves the trachea, primary bronchus and segmental bronchus. The main symptoms including dyspnea, asthma and cough. Bronchoscopic findings supply the main evidence for diagnosis. Voriconazole has been widely used as azole antifungal agent in recent years, which is also a first-line drug in the treatment of invasive pulmonary aspergillosis (IPA), but rare report exists in the treatment of tracheobronchial aspergillosis. Two patients have been remitted with Voriconazole in this study, and it was found that Voriconazole could improve therapeutic effect and shorten therapeutic time with less adverse effects.

A male patient of 54 years old was admitted for “cough, sputum and wheezing for one week” on July 22, 2007. The smoking status of case 1 was 30 packs/year, and the patient had chronic obstructive pulmonary disease (COPD) for 12 years, One week before admission, the symptoms as a result of cold occurred to the patient, such as irritable cough, slight white sticky sputum and obvious wheezing, while no bloody sputum, chest pain nor fever existed. The patient had a medical history of Type-2 diabetes but no bronchial asthma, and an occupational history of exposure to coal dust. The examination after admission showed body temperature of 37°C, respiratory rate of 30 times/min, heart rate of 105 beats/min and blood pressure of 115/75 mmHg. The physical examination indicated that wheezes were heard in bilateral lungs, while other pulmonary sounds were negative. Blood routine examination showed WBC of 21.5 × 109/L and eosinophils (E) percentage of 12%. There was pulmonary function test, the FEV1/ FVC was 65%, and FEV1 was 400 ml larger or >12% after inhaled bronchodilator, the bronchodilator reversibility testing was positive. Biochemical test indicated glucose of 8.91 µmol/L and erythrocyte sedimentation rate (ESR) of 39 mm/h. Besides, no significant changes were found in chest X-ray film on the day of admission. Two days later (on July 24), the patient had Type-I respiratory failure and fever with body temperature of 39°C. The symptoms were improved gradually after anti-infective therapies (Levofloxacin, Cefoperazone), expectorant therapy (Mucosolvan), anti-spastic and anti-asthmatic therapies (intravenous Doxofylline, intravenous injection of Methylprednisolone of 40-80 mg/day, Combivent, inhaled corticosteroids and. bronchodilator). However, wheezing was aggravated after withdrawal of corticosteroid methylprednisolone. In sputum culture, aspergillus grew in a small amount. On July 27, bedside bronchoscopy showed that white masses adhered to the bronchial wall inside the left and right main bronchus (Figure 1), and bronchial wall were easy to bleed after touching. The bronchial secretions were taken for culture with subsequent pathological examination. A large number of aspergillus hyphae under the microscope were shown in the pathological results (Figure 2). Voriconazole was injected intravenously at 0.2 mg/kg twice daily. A week later (on Aug. 15), re-examination was taken under fibrobronchoscope, and it was found that white masses almost disappeared (Figure 3). Voriconazole was administered orally at 0.2 kg/mg twice daily for two months in the course of treatment. No recurrence was observed after three years of follow-up visits. Figure 1: White Masses Adhered to the Bronchial Wall Under the Fibrobronchoscope. Figure 2: Hyphae of Aspergillus Fumigatus Were Observed in the Tissues (Arrow) (10X20).

Figure 3: White Masses Disappeared After One Week with the Treatment of Voriconazole.

A male retired worker of 70 years old was admitted for “cough with thick white sputum and dyspnea for one week” on Feb. 21, 2008. As for medical history, the patient had chronic obstructive pulmonary disease (COPD) for 10 years, and underwent meningioma  Surgery on Nov. 27, 2007, but without receiving chemotherapy. The patient had no bronchial asthma in the past. The examination after admission showed the patient presented chronic illness characterized by barrel chest, bilaterally decreased vocal fremitus, hyperresonnant sound heard by palpitation, fine moist rales and wheezes heard in bilateral lungs. Blood routine examination showed WBC of 9.8 × 109&L and eosinophils (E) percentage of 15%. There was pulmonary function test, the FEV1/FVC was 76%, and FEV1 was 300 ml larger or >12% after inhaled bronchodilator, bronchodilator reversibility testing was positive. The chronic bronchitis was shown in chest X-ray film. No space occupying lesions were found in the lungs by chest CT scan. On Feb. 25, bedside bronchoscopy showed that white masses adhered to the bronchial wall inside the left and right main bronchus (Figure 4). The bronchial secretions were taken for culture with subsequent pathological examination. The pathological results showed aspergillus growth and a large number of aspergillus hyphae under the microscope (Figure 5). Voriconazole was injected intravenously at 0.2 mg/kg twice daily. A week later, white masses disappeared, which had adhered to bronchial wall previously (Figure 6), and wheezing was alleviated gradually. Voriconazole was administered orally at 0.2 mg/kg twice daily for one and a half months in the course of treatment. No recurrence was observed after two years of follow-up visits. Figure 4: White Masses Adhered to the Bronchial Wall Under the Fibrobronchoscope. 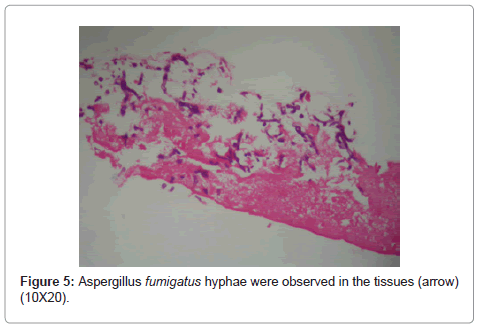 Figure 6: One week after treatment Voriconazole, the bronchial lumen was smooth, and the pathological results showed some aspergillus hyphae still remained in the tissues.

In the past decades, several new antifungal agents have been used clinically, of which therapeutic effects on deep fungal infection have been significantly improved [10-13]. Stevens et al. [14] conducted a randomized double-blind trial of treatment with either 200 mg of itraconazole twice daily or placebo for 16 weeks in patients with ABPA. There were responses in 13 of 28 patients in itraconazole group (46 percent), and adverse events occurred in 25 of 28 patients in itraconazole group (89 percent). The adverse events are shown as hair loss, dry mouth, hand tremors, loose bowel movements, constipation, forgetfulness and increased fatigue. Voriconazole widely dispersed in mammalian tissues with a half-life of 6 hours is mainly metabolized via the liver. In this study, it was found that voriconazole had fast effect and short course of treatment, while few adverse effects in the treatment of tracheobronchial aspergillosis. The two cases showed no obvious adverse effects such as liver and kidney dysfunction, visual abnormality and gastrointestinal reactions [13]. Due to the small size of observation cases, it is necessary to have further studies.

Copyright: © 2012 Zhang CR, et al. This is an open-access article distributed under the terms of the Creative Commons Attribution License, which permits unrestricted use, distribution, and reproduction in any medium, provided the original author and source are credited.