Objective: The aim of this study was to investigate the association between herpes virus reactivation and serum vitamin D levels in patients with recurrent herpetic keratitis.

Methods: This study included 33 eyes of 33 patients with recurrent (more than 2 episodes) herpetic keratitis. The control group was formed of 31 age and gender-matched healthy volunteers who have had no systemic disease and, no herpetic eye diseases previously. Serum vitamin D levels were investigated in the patients and control group and the two groups were compared. Oral vitamin D treatment was given to the patients with low vitamin D according to the guideline of the International Endocrinology Association (IEA). Serum vitamin D levels were measured at the 6-month and compared with the initial serum vitamin D levels. Patients were followed for recurrence of herpetic keratitis.

Herpes viruses can be reactivated in cases of immunosuppression, fatigue, and psychological stress [1-3]. Corneal injury, surgery, and excimer laser are local causes of corneal reactivation [4]. In clinical practice, HSV 1 is often responsible for the development of keratitis [5]. Ocular involvement is usually unilateral but can be seen bilaterally at a rate of 1.3-12%, especially in young patients [6]. Recurrent stromal and endothelial involvement, in particular, is the main cause of visual impairment due to herpes infection [7].

Vitamin D deficiency is defined as 25 hydroxyvitamin D (25(OH) D) below 20 ng/ml and vitamin D insufficiency as 25(OH)D of 21-29 ng/ml [8]. The effects of vitamin D have been investigated on Ca+2 and phosphate metabolism as well as on the immune system [9]. Vitamin D Receptors (VDR) on the immune system cells are effective in the development of innate and adaptive immunity [10]. VDR is a nuclear receptor mediates the effects of vitamin D on the immune system by regulating gene expressionrelated cytokines in T cells [11,12]. Also, VDR regulates the innate immune system including polymorphonuclear cells, macrophages, and epithelial cells by toll-like receptor recognizing viral proteins and nucleic acids [13]. Vitamin D increases the release of antimicrobial, antiviral peptides from immune cells via these receptors [13-18].

The aim of this study was to investigate the association between herpes virus reactivation and serum vitamin D levels in patients with Recurrent Herpetic Keratitis (RHK).

Laser photocoagulation being the standard management for BRVO, in a report by the Branch Vein Occlusion Study Group, 10 grid photocoagulation to macular edema caused by Branch Retinal Vein Occlusion (BRVO) significantly improved long-term visual prognosis. Macular grid laser has been recommended in case of macular edema and visual acuity worse than 6/12 but has a risk of causing inadvertent macular burn. Hence newer modalities like anti VEGF agents have been studied for the treatment of BRVO. The anti VEGF agent Ranibizumab (Lucentis) has been approved by US FDA for treatment of macular edema secondary to BRVO [9]. Another anti VEGF agent Bevacizumab (Avastin) has been used extensively as an off-label drug for the management of BRVO and has been found to be equally effective [10,11] and is much more cost effective.

The Branch Vein Occlusion Study (BVOS) recommends laser treatment after 3 months of onset to avoid the harmful effects of laser in those who may recover spontaneously and to allow haemorrhages to clear up sufficiently to get a reliable Fundus Fluorescein Angiography and to do effective laser photocoagulation. Anti VEGFs can be given even in the presence of retinal haemorrhages and the ocular complications associated with it are very rare [12]. Presently it is not possible to predict which group of patients will resolve spontaneously and hence prolonged observation for spontaneous resolution may not be advisable when an effective and safe modality of treatment is available. There is evidence to suggest that early treatment with intravitreal Bevacizumab may lead to better visual outcome for macular edema secondary to BRVO as compared to differed treatment [13].

This study included 33 eyes of 33 patients with RHK more than 2 episodes despite treatment. The presence of herpetic keratitis was confirmed by Polymerase Chain Reaction (PCR). Topical ganciclovir 0.15% (Virgan, Thea, France) 5 × 1 treatment between 10-14 days was given if there was only epithelial involvement in the antiviral treatment of acute epithelial keratitis. Oral valacyclovir (Valtrex, Glaxosmithklıne, London, United Kingdom) 500 mg 3 × 1 was given with topical steroid treatment when there is stromal involvement. Patients with immunodeficiency, those previously treated for vitamin D deficiency, receiving systemic or topical immunosuppressive therapy for any disease other than herpetic infection, which had received corneal surgical excimer laser or had undergone eye trauma, renal failure or liver failure within the previous 6 months were excluded from the study. The patients were followed weekly during the active infection period and monthly after the decline of the infection findings. Recurrence of the HSV was evaluated as a relapse within 6 months.

The control group was formed of 31 healthy volunteers who had no systemic disease and herpetic eye diseases previously. Control group had similar age, gender, outdoor and sunlight exposure time, psychological stress, socio-cultural structure with the study group. Serum vitamin D levels were measured at the beginning and 6 months and compared.

Oral vitamin D treatment was given to patients with low vitamin D according to the guideline of the International Endocrinology Association (IEA) [8]. This study was conducted in accordance with the Helsinki Declaration and approved by the Institutional Review Board of Pamukkale University, School of Medicine.

Venous blood samples were taken from all participants into gel tubes and were incubated for 20 minutes at room temperature for coagulation. 25(OH)D levels were measured using the Electro Chemi Luminescence (ECL) method (Roche, cobas 6000e 601 modular analyzer, Mannheim Germany) after centrifugation at 2000 rpm for 10 minutes.

According to the reference study results, there was a large effect size (d=1.37) [14]. Based on the results obtained in this reference study of vitamin D values, the patient group (5.75 ± 4.50 ng/mL); the control group (12.96 ± 5.89 ng/mL), which is the closest point to our study; we performed a power analysis before we started to include patients to our study. Assuming that a lower effect size level (d=0.8) could be achieved, a power analysis was performed before the study. Accordingly, at least 42 subjects (at least 21 in the study group and 21 in the control group) were included in the study that would result in 80% power with a 95% confidence level (5% type 1 error rate).

The evaluation was made of 33 patients and 31 control group subjects. 20 patients had epithelial keratitis, 6 patients had stromal keratitis and 7 patients had endothelitis. There was no significant difference between the two groups in respect of mean age and gender (p=0.83, 0.61 respectively) (Table1).

Table 1: Demographic characteristics of the groups. 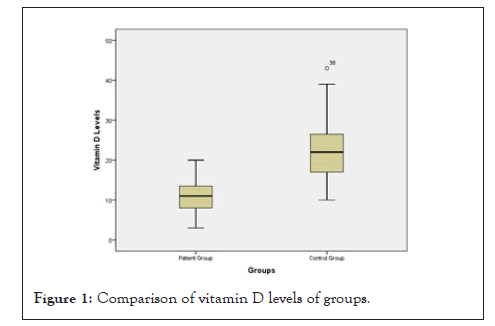 Table 2: Comparison of groups according to vitamin D levels.

Serum vitamin D levels at the 6-month was 29.13 ± 13.26 ng/ ml. It was found statistically significantly more than initial serum vitamin D levels (p=0.008). Only one patient had a recurrence during the follow-up period. 32 of the 33 patients did not have any recurrence during follow-up. This patient had two recurrences as endothelial keratitis. She was treated with oral valacyclovir (Valtrex,Glaxosmithklıne, London, United Kingdom) 500 mg 3×1 and dexamethasone eye drop 8×1 (maxidex, Alcon Fort Worth, Teksas, USA) during the follow-up period. Her initial vitamin D levels were 3 at the initial and 14 at the sixth month. The patient’s initial Vitamin D level was very low and it was seen that she could not benefit from oral vitamin D treatment.

Vitamin D reduces viral activity by inducing the level of defensin, cathelicidin, and reactive oxygen species [12]. Defensins are active peptide components of the innate immune system which have a strong antiviral effect against HSV [20]. The active form of vitamin D,1,25-(OH)2-D regulates the release of defensin β2, which has strong antiviral properties from keratinocytes, monocytes, and neutrophils, as well as the release of cathelicidin, which has an antimicrobial effect on the ocular surface released from neutrophil, monocyte, and natural killer cells [15,16]. Active vitamin D, which is the first line of defense in viral immunity, acts by strengthening the innate immune system including neutrophils, monocyte, macrophage and natural killer.

LL-37 which is an active form of cathelicidin disrupts the viral membrane and blocks viral entry by interacting with lipid envelops of viruses [21,22]. LL-37 also enhances innate immunity, whereas it inhibits adaptive immunity by inhibiting antigen presentation of dendritic cells, reducing T-cell proliferation, and shifting the T-cell balance from Th1 and Th17 to Th223. Th1 and interleukin 17-producing Th17 are responsible for inducing inflammation and autoimmunity [24]. Thus, cathelicidin can limit microbial invasion by decreasing the inflammatory response. The direct effect of cathelicidin on HSV has also been investigated. Gordon et al. reported that in corneal epithelial cell culture, LL-37 has a proven dose-dependent inhibitory effect on HSV1 [18].

Kumar et al. [25] found that the addition of 25 D3 and 1,25D3 vitamin to Hela cells before HSV 1 infection decreased the amount of HSV 1 DNA and the amount of TLR that triggered the innate and adaptive immune response against the virus. Choi et al. [26] created a Behcet disease-like inflammation in an experimental study by injecting mice with the HSV1 virus. After vitamin D administration, reduced inflammation and TLR 2 and 4 levels were determined in these mice. In an experimental study by Boonstra et al. [27], it was shown that 1,25-(OH) 2-D inhibited Th1 cells while increasing Th2 cell development. Thus, it strengthens the first response against the micro-organism, helps to control the agent, and helps to prevent an increased inflammatory response. 25(OH)D blood level should be above 30 ng/ml for reducing the risk of infectious diseases [8].

Studies reported an association between higher ultraviolet contact time and herpes reactivation [28-30]. They concluded that ultraviolet causes recurrence of herpes by local effects on the ocular surface. In these studies, ultraviolet dose exposed was calculated based on time spent outdoors each week. Seasonal and weather-related variations are possible. These variations may change the results. Furthermore, in all studies, the authors did not give any information about blood vitamin D levels and its protective effects against to the herpes virus.

Vitamin D levels were found less in RHK patients compared to the control group. Vitamin D levels of all participants in the study group were found deficient. Vitamin D deficiency may weaken the natural antiviral defense against HSV and may contribute to the reactivation of the virus. In addition, we prescribed oral vitamin D supplements to the patients to increase the vitamin D levels and we found that the recurrence of herpetic keratitis did not develop in all but one patient during our 6-month followup period. Vitamin D supplementation may prevent recurrence in patients with recurrent herpetic keratitis with low vitamin D levels. This is an initial study. To prove the role of vitamin D in RHK, further studies at the molecular level are needed to shed light on this subject.

There is no financial support for this study.

The authors report no conflicts of interest. The authors alone are responsible for the content and writing of the paper.

Copyright: © 2022 Khan S, et al. This is an open-access article distributed under the terms of the Creative Commons Attribution License, which permits unrestricted use, distribution, and reproduction in any medium, provided the original author and source are credited.