Patients and methods: Women with both FSD and OAB were evaluated subjectively using FSF Index (FSFI), OAB symptom score (OABSS), OAB q and QOL scale. Women had FSFI ≤ 29 and OABSS>8 were enrolled as Study group and 20 women free of OAB and SD as Control group. Urinary NGF and HB-EGF levels were ELISA estimated and the ratio to urinary creatinine was calculated.

Results: Levels and ratios of urinary NGF and HB-EGF were significantly higher in study women especially with wet OAB. Urinary HB-EGF levels showed negative and positive correlation with FSFI and OABSS, respectively. Urinary NGF/Cr was correlated positively with OABSS and negatively with FSFI and QOL scores and a ratio of 8-15 pg/ mg is suggestive, but at ≥ 15 is indicative for FSD. Urinary NGF level at 420 pg/ml is predictive of FSFI at<30.

Overactive bladder (OAB) is defined as urgency, with or without urge incontinence, usually with frequency and nocturia [1]. OAB syndrome is a chronic medical condition with an estimated prevalence of 16.5%, affects performance of daily activities with a major influence on quality of life (QOL) [2]. Female Sexual Dysfunction (FSD) is prevalent and causes distress, particularly among women at midlife [3]. FSD has negative impact on female’s QOL and is often multifactorial problem necessitating a multidisciplinary evaluation [4]. The lack of objective diagnostic methods for OAB syndrome has spurred research into its potential biomarkers which can constitute useful diagnostic tools [5].

Nerve Growth Factor (NGF) is a neurotrophin [6] that is able, after binding and activating its receptors [7], to promote nerve cell survival [8]. NGF, a small secretory protein produced and released by smooth muscle and urothelium as a chemical mediator in the bladder [9] and experimentally was found to induce sensitization of afferent nerve pathways leading bladder hypersensitivity without inflammation [10].

Heparin-binding epidermal growth factor-like growth factor (HBEGF) is an activating ligand for EGF receptor tyrosine kinase [11] and at least one of its isoform is synthesized by the smooth muscle of the human bladder wall [12]. HB-EGF may act as autocrine/paracrine GF involved in proliferation of tubular epithelial cells and kidney repair [13]. HB-EGF is synthesized as a membrane-anchored precursor which stimulates adjacent cells in a juxtacrine manner and is cleaved in a protein kinase C-dependent process, to yield its soluble form [14].

The protocol of this two-arm observational study as approved by the Local Ethical Committee intended to collect women attending Gynecology outpatient clinic complaining of FSD and those attending Urology outpatient clinic complaining of OAB manifestations. Both of these women were eligible for clinical evaluation for pathologies inducing either OAB or FSD and women older than 35 years or had organic lesions or psychological states predisposing to these complain were excluded from the study. Only women signed fully informed written consent were enrolled in the study.

1. Evaluation questionnaires– All enrolled women were asked to complete the following questionnaires in presence and assistance of a clinic female assistant not included in the study and was blinded about the main complaint and the referral clinic:

2. All women gave FSFI ≤ 29, OABSS>8, high SBS and/or low HRQL were enrolled as Study group. Twenty women of cross-matched age and were free of manifestations of OAB (OABSS<8, low SBS) and sexual problems with FSFI>30 and high HRQL were selected from those attending family planning unit and were included as Control group for comparative purposes. All study and control women were asked to give urine sample for laboratory investigations.

During the study period, 537 women had attended Gynecology clinic complaining of SD; 117 women had evident gynecological pathologies inducing SD and were excluded, while 420 women had no definite pathology and were eligible for evaluation for presence of OAB using OABSS that defined 51 women with scores suggestive of OAB and were included in the study. On the other arm, 171 women attended Urology clinic complaining of symptoms suggestive of OAB; 129 women had non-neurogenic OAB and were eligible for evaluation for SD, and FSFI score was suggestive of SD in 23 women who were also included in the study. These 74 women gave urine samples for laboratory investigations (Figure 1). Figure 1: Flow chart of the study.

The obtained mid-stream urine sample was immediately centrifuged at 3,000 rpm for 20 minutes. The supernatants were carefully separated into two parts:

1. The first part: 1-ml of supernatant was collected in 1.5-ml sterile dry tubes and preserved at-20˚C till be assayed.

2. The second part: 3-ml of supernatant was collected in a clean dry tube for measurement of urinary creatinine (uCr).

1. The urinary nerve growth factor was measured with the enzyme linked immunoassay (ELISA) kit (catalogue no. MBS010772, My BioSource, Inc., San Diego, USA) by sandwich ELISA technique according to the manufacturer’s in structions, as previously reported [19].

Obtained data were presented as median with inter-quartile range and mean ± SD. Data were analyzed using Mann-Whitney U Test and One-way ANOVA test. Possible relationships were investigated using Pearson linear regression analysis. Sensitivity and specificity of estimated parameters and ratios as predictors for the impact of OAB on FSF were evaluated using the receiver operating characteristic (ROC) curve analysis judged by the area under the curve (AUC) that was compared versus null hypothesis that AUC=0.5. Kaplan-Meier regression analysis was used to determine a cutoff point for urinary NGF/Cr ratio above which OAB affects FSF. Statistical analysis was conducted using the IBM SPSS (Version 23, 2015) for Windows statistical package. P value<0.05 was considered statistically significant.

Estimated urinary NGF and HB-EGF levels and its ratios to uCr were significantly higher in study than control women and in women had wet than women had dry OAB (Table 1). 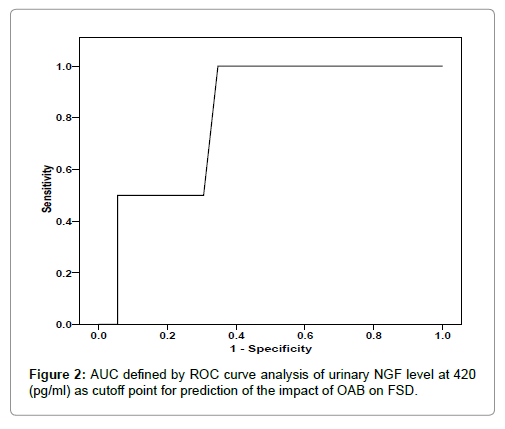 Figure 2: AUC defined by ROC curve analysis of urinary NGF level at 420 (pg/ml) as cutoff point for prediction of the impact of OAB on FSD.

The current observational screening study aimed for evaluation of the impact imposed by OAB on the couple sexual relationship; to standardize the study outcome only women younger than 35 years were included in the study. Such group of women was considered at their highest emotional warmness and desire for sexual relationship and on the other side their male partners most probably will be around the same age group and mostly had competent ability to do an act as regards potency, ejaculatory function and sexual interest. The study relied on FSFI questionnaire which is a widely used instrument, applicable as a multidimensional measurement of FSF in sexually active or inactive women as previously documented in literature [22-25].

Secondly, estimated levels of urinary NGF and HB-EGF standardized in relation to uCr levels were significantly higher in women with OAB than controls and with wet than dry OAB. These results supported that previously reported in literature concerning the detection of higher levels of uNGF and high ratio in relation to uCr levels in OAB patients [29-31]. Furthermore, estimated levels of uNGF were positively correlated with OABSS and OAB q scores but negatively with FSFI and HROL scores; a finding that points to a possible relationship between disturbed levels of growth factors and development, persistence or aggravation of OAB and go in hand with Suh et al. [32] who demonstrated that urinary urgency was significantly related to urinary NGF/Cr level.

Thirdly, the reported statistical findings assured the relation between estimated urinary markers and OAB on one side and OAB and FSD on the other side. Moreover, statistical analyses defined NGF/Cr levels at range of 8-15 pg/mg as suggestive indicator for FSD and at 15 pg/mg as indicative predictor for FSD with uNGF level at 420 pg/ml as the cutoff point for prediction of FSFI at<30 in women with OAB with high specificity (AUC=0.809).

In line with these findings, Ozdemir et al. [29] found urine NGF/ Cr at a cut-off level of>360 had sensitivity of 87.5%, specificity of 100% and positive and negative predictive values of 100% and 90.9% for OAB diagnosis. Also, Vijaya et al. [33] assured the reliability of urinary NGF as a good predictor of patients having OAB or not and using a cut off of 13 ng NGF/g creatinine provides a sensitivity of 81%, but a specificity of only 39% for OAB. Moreover, Suh et al. [32] demonstrated that OAB manifestations were significantly related to urinary NGF/Cr level and urinary NGF/Cr was a sensitive biomarker for discriminating OAB patients with significant AUC. Recently, Dagdeviren and Cengiz [34] found that NGF threshold of>380 ng/ml had a sensitivity of 81.7% and a specificity of 100% to discriminate between women with both OAB and metabolic syndrome and healthy women free of both conditions.

In support of the assumption that urinary NGF is a potential biomarker that could be used to aid for diagnosis of presence of and severity of OAB; both Ciftci et al. and Suh et al. found urinary levels of NGF/Cr tended to decrease in patients who responded to OAB treatment and in those who did not experience recurrence and concluded that urinary NGF is a potential biomarker for predicting the outcome of OAB treatment and may help for deciding to stop treatment in responders.

OAB especially wet type affects female’s QOL and SF. Urinary NGF is significantly correlated with impact of OAB on QOL and SF and could predict FSD. However, wider scale comparative studies using objective parameters were mandatory to document these subjectively obtained results and to assure the diagnostic value of the assumed level of uNGF as a diagnostic cutoff point for identification of women affected sexually secondary to OAB manifestations.

Copyright: © 2019 Hagras MM, et al. This is an open-access article distributed under the terms of the Creative Commons Attribution License, which permits unrestricted use, distribution, and reproduction in any medium, provided the original author and source are credited.