Chronic mucocutaneous candidiasis (CMC) is a rare and heterogeneous group of disorders that may appear as an isolated disease or as a part of a complex syndrome (hyper-IgE syndrome or autoimmune polyendocrine syndrome-1 with ectodermal dystrophy). CMC can be transmitted as an autosomal-recessive (AR) or autosomal-dominant (AD) form, with common features including recurrent or persistent noninvasive Candida infections of the skin, nails, oral and genital mucosae, and associated autoimmune manifestations (most commonly endocrinopathies). It is caused by genetic faults in the immune system, through quantitative or qualitative, acquired or inherited T-cell deficiencies [1-4].

We present a female patient, now 53 years old, who has suffered from recurrent Candida infections, involving oral, vulvar and vaginal mucosae, for more than 9 years.

Along the course of the disease, the patient developed an interstitial lung pattern without microbiological documentation. A thoracic CT scan showed bilateral ground glass pattern, right paratracheal mediastinal, prevascular and aortopulmonary lymphadenopathy, the larger 1.5 X 0.9 cm, locating on the back of left upper lobe, as well as subpleural nodule of approximately 8 mm. Bronchoscopy was performed, without endoscopic findings; bronchoalveolar aspirate and lavage revealed normal T4 and T8 cell counts and no malignant cells. The pathologic examination of a lung biopsy showed respiratory bronchiolitis with areas of desquamated pneumocytes and emphysematous changes. These findings could be explained by smoking habit in the past. No lung pattern changes were seen in following imaging studies.

A recent report [7] has shown clinical benefit of granulocyte-colony stimulating factor (G-CSF, filgrastim) treatment in a patient with AD form of isolated CMC with STAT1 gain-of-function (GOF) mutation who showed a decrease in Th17 cells and IL-17 secretion. Based on this study, we considered the possibility to assess the Th17 function in our patient, as well as the role of G-CSF to achieve a potential therapeutic benefit.

The level of IL-17 was measured using the IL-17A ELISA kit (Diaclone, lower limit of detection 1.6 pg/ml) in untreated plasma samples. Furthermore Th17 function was evaluated in supernatants of cultured Ficoll-Hypaque purified patient’s peripheral blood mononuclear cells (PBMC) upon stimulation or not with phorbol myristate acetate (PMA) 10 ng/ml and ionomycin 1 μg/ml. PBMC from a healthy individual was run in parallel. Stimulated and unstimulated cells were cultured for 48 hours. Figure 1 shows that patient’s PBMC produced about 30 time’s smaller amounts of IL-17 than the control subject. In contrast, the plasma IL-17 levels were 16.2 and 10.3 pg/ml for case and control samples respectively. Both values fell in the normality range, assuming in healthy subjects a mean level of IL-17 of 27.1+/-30.1 pg/ml [8]. Treatment with subcutaneous G-CSF was started, at a dose of 60 MU (5 μg/Kg) twice a week during two months, keeping white blood cell counts below 15,000/mm3 (the leukocyte count was increased during the treatment, and returned to reference range when C-GSF was stopped), following the safety cutoff established by Wildbaum G. et al. [7]. A second measurement of IL-17 in plasma and PBMC was performed after two months on treatment with G-CSF. No major changes in plasma levels were noticed, IL-17 levels were 20.6 and 9.5 pg/ml for case and control samples respectively (both in the normal range). Importantly, no improvement in the production of IL-17 by Th17 lymphocytes was observed either in unstimulated or stimulated cultured PBMC (Figure 1B). Consistently, clinical remission was not achieved and the patient remained with painful oral lesions (and isolation of Candida sp.) during the treatment. 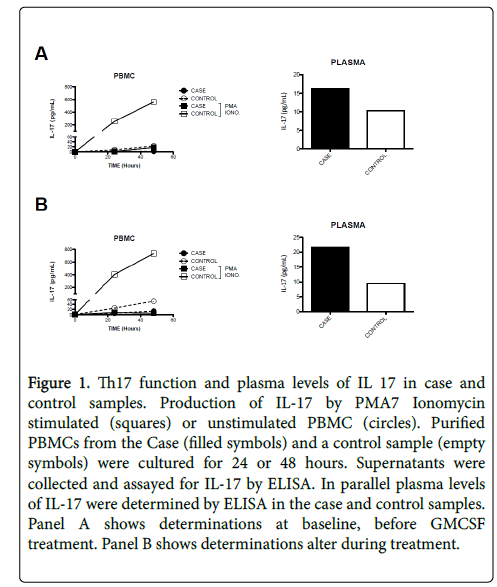 Figure 1: Th17 function and plasma levels of IL 17 in case and control samples. Production of IL-17 by PMA7 Ionomycin stimulated (squares) or unstimulated PBMC (circles). Purified PBMCs from the Case (filled symbols) and a control sample (empty symbols) were cultured for 24 or 48 hours. Supernatants were collected and assayed for IL-17 by ELISA. In parallel plasma levels of IL-17 were determined by ELISA in the case and control samples. Panel A shows determinations at baseline, before GMCSF treatment. Panel B shows determinations alter during treatment.

Therefore, based on all laboratory findings (normal STAT1, STAT3, IL17A, CLEC7A and CARD9 genes, normal plasma IL-17 levels, and a severe deficit in IL-17 production by the patient’s PBMCs upon stimulation), the patient was diagnosed of a defect in IL-17 production by lymphocytes Th17, as the underlying mechanism for development of recurrent isolated CMC. No clinical or ex vivo response was seen with G-CSF therapy.

Th17 cell development is directed by multiple cytokines, including IL-23 (as well as IL-12β and IL12-Rβ1 gene products) [4], produced by antigen-presenting cells stimulated through pathogen-recognition receptors (including Dectin-1), in response to pathogen-associated molecular patterns (b-glucans, lipoproteins, peptidoglycan). The later are found within the cell walls of fungi and bacteria and activate the signal transducer and activator of transcription STAT3, STAT1 and CARD 9. Exposure of naïve T cells to this cytokines induces their differentiation into Th17 cells which produce IL-17 with essential effector functions for adequate response of the immune system against Candida infections of oral and vaginal mucosae, skin and nails [9]. Candida -specific Th17 cells produce mostly IL-17, IL-22 and IFN-ϒ. Likewise, IL-6, IL-23 and IL-1Β contribute to the differentiation of Candida-specific Th17 cells (7).

Patients with genetic defects in Th17 immunity suffer from recurrent infections by Candida species, involving mucosae or skin. Most cases are sporadic, but both, isolated or syndromic, with AD or AR inheritance, have been described [10].

Recent findings show low IL-17 production and/or plasma levels in patients with AD hyper-IgE syndrome and subjects bearing heterozygous STAT3 mutations, susceptible to CMC and staphylococcal diseases, as well as in a family with AR CARD9 deficiency, prone to CMC and other fungal infections [7]. High levels of autoantibodies against IL-17 were documented in patients with AR autoimmune polyendocrine syndrome type 1 presenting with CMC, and in AD form of isolated CMC with STAT1 GOF mutation [7].

Physiopathology findings in patients with CMC and potential mechanisms involved

The diagnosis of CMC is based upon clinical features of the skin and mucous membranes lesions, demonstrably caused for Candida, of chronic recurrent evolution. It is necessary to rule out other causes of immune deficiency (primary and secondary) that affect T cell function, including combined immune deficiencies, usually refractory to antifungal treatments.

The treatment includes antifungal therapy and treatment of associated endocrine and autoimmune abnormalities, as appropriate. There are two reports of successful hematopoietic cell transplantation [25,26] and one report of long-term clinical remission in a patient with a STAT1 mutation treated with G-CSF [7].

We have done a therapeutic trial with G-CSF. However, our patient did not show any clinical benefit or a restoration in the production of IL-17 ex vivo by lymphocytes Th17. The patient did not have the previously reported STAT1 GOF mutation [7], and no other genetic defect has been found so far.

Many causes of CMC, either isolated or associated with other autoimmune or endocrinopathic manifestations have been elucidated. The recent works on IL-17 and Th17 cells have led to an expanded understanding of the mechanisms underlying the host defense from Candida sp. on mucosal surfaces. This pathway is regulated by multiple receptors and signal transductors, requiring normal function from all of them, to achieve an adequate fungal immune response. Whether some of these pathways might be modulated by G-CSF, others appear to be unresponsive.

Further studies should determine the most effective treatment for each of the molecular and clinical manifestations experienced by these patients.

We thank Genomic Medicine Group, Clinic University Hospital of Santiago - University of Santiago de Compostela, A Coruña, for genetic testing of our patient suffering from CMC.

Copyright: © 2017 Caínzos-Romero T, et al. This is an open-access article distributed under the terms of the Creative Commons Attribution License, which permits unrestricted use, distribution, and reproduction in any medium, provided the original author and source are credited.
Top