Earrings have been favored by the ladies since ancient times (Figure 1). Meanwhile, ears have been used to treat diseases from time immemorial (Figure 2A). The Egyptologist Alexandre Varille (1909-1951) has demonstrated that women in ancient Egypt, who did not want any more children, had their external ear pricked with a needle or cauterized with heat [1]. Mediterranean sailors’ wearing gold earrings were not just used as decorations, but were said to improve vision [2]. Hippocrates, who was the father of Greek medicine, reported doctors made small openings in the veins situated behind the ear to facilitate ejaculation and reduce impotency problems [3]. Cutting of veins situated behind the ear was used to treat leg pain as well [4]. The Greek physician Galen introduced Hippocratic medicine to the Roman Empire in the second century CE, commentating on the healing value of scarification at the outer ear [2]. Figure 1: Dancing lady with charming earrings on a remnant of ceramics date to 3200 years ago, which is the Nineteenth Dynasty in the ancient Egypt. After the fall of Roman Empire, the medical records of Egyptian, Greek and Roman medicine were best preserved in ancient Persia and Arabian world. Persian records were specific references to medical treatments for sciatic pains and sexual related disease produced by cauterization of the external ear (Figure 2B) [2]. Figure 2b: Persian Surgery Textbook (Imperial Surgery) in the 12th century illustrated that the doctor cauterizing the external ear for patient’s migraine.

Vagus nerve stimulation (VNS) has been approved by FDA (Figure 3) for epilepsy in 1997 [5] and treatment-resistant depression in 2005 [6,7]. However, they have their limitations as well, including high cost, the involvement of surgery, perioperative risks, and potentially significant side effects [8]. 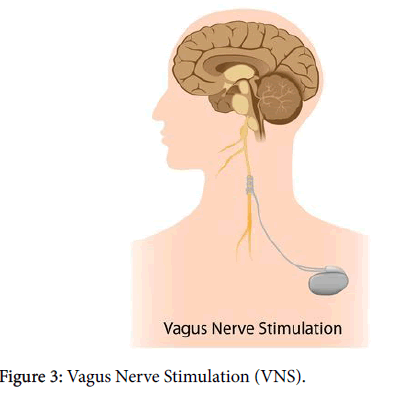 Transcutaneous auricular vagus nerve stimulation (taVNS) is developed from auricular acupuncture several years ago by our team. Auricular acupuncture (Figure 4) is a very important part of Traditional Chinese Medicine (TCM) [9]. In the classic TCM text of Huang Di Nei Jing was compiled in around 500 B.C whose correlation between the auricle and the body had been described that all six Yang meridians were directly connected to the auricle, whereas the six Yin meridians were indirectly connected to the ear by their corresponding yang meridian, respectively [4,10]. Since the ancient time, Chinese doctors have been using auricular acupuncture to treat a wild range of diseases, including insomnia, depression and anxiety etc [11]. Nogier presented his discovery in several congresses and published it in an international circulation journal which eventually led to the widespread acceptance of his approach. With some exceptions, the Chinese charts were very similar to Nogier’s originals [12]. Also, according to anatomical studies which suggest that the ear is the only place on the surface of human bodies where there is afferent vagus nerve distribution [13,14], especially in the auricular concha (Figure 5) [15], a direct stimulation of these afferent nerve fibres on ear supposes to has similar effect to classic VNS without surgical intervention, which is fertile for more disorders (Figure 6) [16]. Figure 5: The innervations of the auricular branch of the vagus nerve are marked by green color which is mainly distributed in auricular concha. 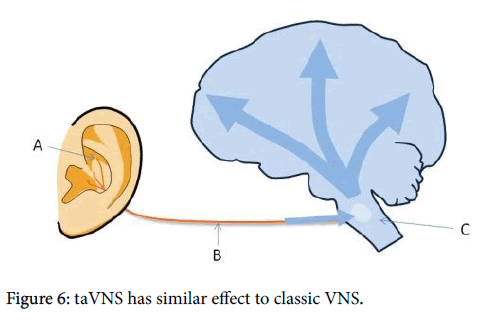 At the very beginning, transcutaneous auricular vagus nerve stimulation (taVNS) was for pain relief [1,17,18]. As the classic VNS was approved by US FDA for both epilepsy and treatment-resistant depression, clinical trials of taVNS for these two diseases were increased gradually [16,19-22]. And then, because auricular acupuncture was very effective for insomnia disorder (ID), taVNS was therefore applied to these patients [23]. In addition to the above mentioned, more and more results of taVNS on neurological and mental disorders was achieved including tinnitus [24,25], chronic migraine [26], schizophrenia [27,28], postoperative cognitive dysfunction [29].

In 2013, Compelling evidence exists to suggest that vagus nerve stimulation (VNS) may improve outcomes after severe brain injury. The clinical trial for which researchers have obtained FDA IDE clearance will be the first step in determining the efficacy of VNS for improvement of consciousness after severe brain injury [30]. Inspired by this, our team is focusing on transcutaneous auricular vagus nerve stimulation (taVNS) on patients with disorder of consciousness (DOC). Stirring results are coming out.

Auricular treatments to diseases can be traced back to ancient Egyptian and Chinese times. Inspired by auricular acupuncture of TCM, and to overcome the disadvantages classic vagus nerve stimulation (VNS), we developed transcutaneous auricular vagus nerve stimulation (taVNS). It was applied to neurological and mental disorders, including pain, epilepsy, depression, insomnia, tinnitus, chronic migraine, schizophrenia, postoperative cognitive dysfunction etc. It also shows a bright prospect in other neurological and mental disorders. Further studies should be carried out.

Copyright: © 2016 Yu Y, et al. This is an open-access article distributed under the terms of the Creative Commons Attribution License, which permits unrestricted use,distribution, and reproduction in any medium, provided the original author and source are credited.