Multiple rib fracture (MRF) causes severe pain that compromise respiratory mechanics. We evaluated the efficacy of thoracic paravertebral block with bupivacaine -fentanyl mixture in patients with unilateral MRF. The study was carried out on 172 blunt chest trauma patients in prospective nonrandomized case series. An initial bolus dose of 0.3 ml/kg of bupivacaine 0.25% plus fentanyl 2 μg/ml was used following by continuous infusion with 0.1 ml/kg/h of bupivacaine 0.125% plus fentanyl 2 μg/ml. Pain severity was assessed by visual analogue scale (VAS) at rest and during coughing; bedside spirometry was measured 5 times in 3 consecutive days after paravertebral block. Traffic accidents (69.1%) was major reason for blunt chest trauma; the number of ribs fracture ranged from 3-5 (76.1%) and 6-8 (23.9%). The rate of hemothorax, pneumothorax and the combination hemothorax-pneumothorax were 64.5%, 7.6% and 27.9% respectively. There was significant improvement in pain score at rest and during coughing, respiratory rate, FVC and FEV1 (p<0.05) 30 min after initial bolus dose, which were sustained during continuous thoracic paravertebral infusion 72 h (p<0.05). The rate of analgesic rescue by paracetamol infusion was 6.4%. No patient had respiratory depression or respiratory failure or signs of local anesthetic toxicity. The result shows that thoracic paravertebral analgesia with bupivacaine and fentanyl provided a good efficacy for pain management in patients with unilateral MRF.

One hundred and seventy two blunt chest trauma patients with 3 or more unilateral multiple rib fractures were enrolled. Pain management by continuous paravertebral block with mixture of bupivacaine fentanyl for treatment from December, 2013 to December, 2016 at Military hospital 103, Vietnam was studied. The patients were selected if they had a stable hemodynamic, no mechanical ventilation,normal mental status and any pneumothorax or hemothorax had been drained as well as any surgical procedure requires were performed completely. Criteria for exclusion were allergy to local anesthetic, infection at the site of needle insertion, kidney or liver failure, any spine fracture or pre-existing spine deformity, severe traumatic brain, spinal cord injury or not agreed to continue with analgesic method. Patients who were intubated, sedated or mentally impaired after paravertebral block were also excluded. The severity of injury was described by the abbreviated injury scale (AIS).

All the patients in the study group were explained for pain management method and educated the way for pain report by Visual Analogue Scale at rest and during coughing. The written informed consent need to be completed before performing TPVB procedure. Intravenous line secured and standard monitoring applied for all. TPVB was performed under antiseptic condition in sitting position. The spinal level chosen for needle insertion was two segments below the uppermost fractured rib or midway between the uppermost and lowest fractured rib, 2-2.5 cm distance from the midline in the same injury site. Lidocaine 1% solution was infiltrated at needle insertion site. Tuohy 18-gauge needle (Perifix, B. Braun, Germany) was inserted perpendicular to the skin to contact with transverse process at 2-4 cm depth. And then walk off the superior of the transverse process and then gently advanced until there was loss of resistance with air, demonstrating that the needle tip had passed the superior costotransverse ligament to enter the paravertebral space. Then epidural catheter was inserted through the Tuohy needle for 2-3 cm distance into paravertebral space. The needle was removed and then the catheter was fixed alongside back. The patient was returned to the supine position. Negative aspiration with blood and cerebral spinal fluid were confirmed before injecting local anesthetic.

Initial dose of 0.3 ml/kg of bupivacaine 0.25% with 1:200.000 epinephrine solution was administered over 3 min through catheter. Standard monitoring was implied. Loss of sensation to cold was assessed to determine the dermatomal sensory inhibition level after 30 min. Then, continuous paravertebral space infusion at the rate of 0.1 ml/kg/h of bupivacaine 0.125% and fentanyl 2 μg/ml as maintained. The infusion rate can be adjusted to increase 1-2 ml/h each time to reach a maximum infusion rate of 0.2 ml/kg/h or bolus 3-4 ml of solution if the VAS score during coughing over 4 or if the patient requested for additional analgesia.

The data were analyzed with SPSS software 16.0 version. The data are presented as the mean (SD) when normally distributed or as the median (range) when not normally distributed. Appropriate parametric (paired t test) and nonpara-metric tests (Wilcoxon signed ranks test) were used. A p-value of 0.05 was considered to be statistically significant.

The main reason for blun chest trauma was traffic accident with 119 cases (69.1%) and then high fall and others cause 24.4%, 6.5% respectively. All patients were not administered any analgesic agents before admission to clinical department. TPVBs were commenced a median of 17.4 h (range, 5-52 h) after admission to the hospital. Paravertebral catheter was inserted between the third and the nine thoracic spinal levels with the biggest number at T5-T6 (47.1%) then T6-T7 (26.8%), (Figure 1). 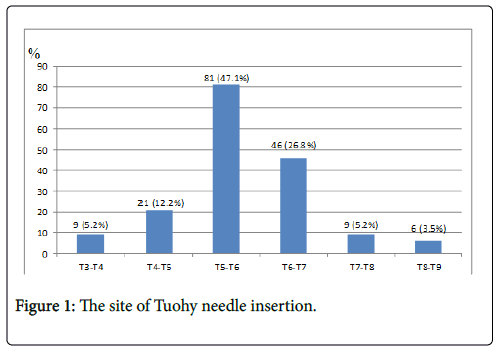 The average depth from the skin to the thoracic paravertebral space was 4.78 ± 0.88 cm (range, 4-6.3 cm). There were 6 cases (3.4%) had a bit difficult to advance the catheter that need to reidentify paravertebral space by changing the insertion site. The catheter was inserted through the needle successfully in all cases.

All the patients achieved sensory loss on the skin following by nerve root distribution after using initial dose of bupivacaine solution which was checked by gauze cold test. The average dermatomes sensation loss was 2.5 (range 3-9 segments). No patient had unwanted bilateral symmetricalblock Hypotension was occured in 3 cases (1.7%) that required treament with rapid fluid infusion and got normal without vasopressor.

The significant pain relief was seen in the study both at rest and during coughing (p<0.05) after the initial dose and remained in three consecutive days with continuous infusion into thoracic paravertebral space (Figure 2). Respiratory function was improved with decreases in respiratory rate (p<0.05), and there were increases in FEV1, FVC (p<0.05), (Figures 3 and 4). SpO2` was significant increases after thoracic paravertebral analgesia (p<0.05), hemodynamic had also in stable condition (Table 3). No patient had respiratory depression or respiratory failure or signs of local anesthetic toxicity. 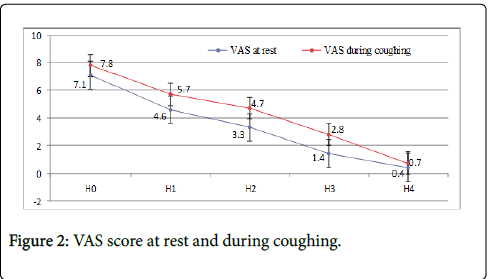 Figure 2: VAS score at rest and during coughing. 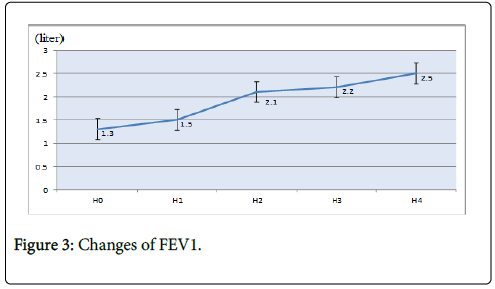 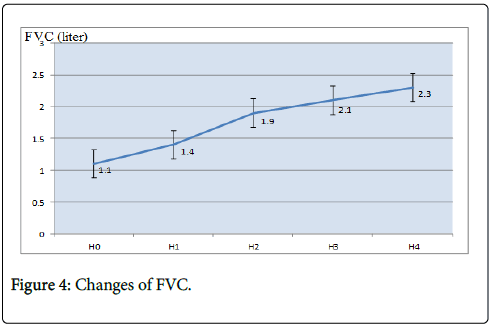 The results indicated that pain in the blunt chest trauma patients with unilateral MFR was well controlled with continuous thoracic paravertebral infusion using bupivacaine 0.125% plus fentanyl 2 μg/ml. Respiratory function test improved as a result of adequate pain relief. But the reality that our study is not designed in randomized controlled research in order to get clearer outcomes. According to previous studies, TPVB was used successfully as a single technique for pain management in MFR patients [3,7,8].

The blunt chest trauma is the most prevalent in Vietnam due to the high rate of traffic accident. According to recently studies, the severe pain correlated with the number of rib broken and pain management is cornerstone of treatment for blunt chest trauma patients with multiple rib fractures [7,9].

The crucial features that all the patients complained were difficulty in breathing due to pain and unable to lie supine/prone or even taken deep breaths. Beside intravenous opioid and intercostal block, thoracic epidural block was considered as the effective way for pain management [10].

Thoracic paravertebral analgesia had been studied for pain management in blunt chest trauma patient with MRF. Some contents include spinal (intercostal) nerve, the dorsal ramus, the rami communicant and the sympathetic chain is contained in the thoracic paravertebral that is a wedge-shaped space and lies on either side of the vertebral column and contains. Administration local anesthetic into paravertebral space produces unilateral somatic and sympathetic block, which is advantageous for unilateral analgesic procedures of the chest trauma [4,11]. Thoracic paravertebral injection may remain localized to the level injected or spread to the contiguous levels above and below the intercostal space laterally. Combination of the above to affect ipsilateral somatic and sympathetic nerves, including the posterior primary ramus in multiple contiguous thoracic dermatomes [10].

Mohta [9] had been compared thoracic paravertebral analgesia with thoracic epidural analgesia in terms of efficacy and outcome in patients with fractured ribs (n=30). The findings that both TEA and TPVB provided good pain relief and improved respiratory function, as evident by improvement in VAS scores at rest and during coughing, respiratory rate, and peak expiratory flow rate. However, no significant intergroup differences were found. Duration of bupivacaine infusion, morphine requirement, length of intensive care unit and hospital stay, and incidence of pulmonary complications were also similar in the two groups. Incidence of hypotension was more in TEA group. Thus, in this study, continuous bupivacaine infusion through TPVB is as effective as through TEA for pain management in patients with unilateral fractured ribs and the outcome after two techniques is comparable.

Hypotension is a common side effect with thoracic epidural block because of sympathetic bilateral block [8]. In contrast, it rarely occurs in patients with TPVB due to unilateral sympathetic blockade. In our study, most of patient had a stable hemodynamic and hypotension was occured in 3 cases (1.7%) that required treament with rapid fluid infusion and got normal without vasopressor administration. These patients had 8 to 9 segments block on the skin after 30 min injection innitial dose due to extensive spread of local anesthetic in paravertebral space.

According to Kamarka’s study, in the fifteen patients with unilateral MRF, there was significant improvement in pain scores measured both at rest and during coughing (p<0.001) after the initial treatment, and the improvements in pain scores were sustained for 4 days (p<0.01) that thoracic paravertebral infusion was in used [12]. Pain score at rest and during coughing had a significant improved after injecting bupivacaine solution in three consecutive days. But in our study, there still 11 patients (6.39%) were needed rescue analgesia by paracetamol infusion after reaching the maximum dose 0.2 ml/kg/h. This may be due to the patients were not used any analgesic agents before performing paravertebral analgesia.

With good quality of pain relief at rest and during coughing (Figure 2), respiratory function was improved (Figures 3 and 4). There was also an improvement in respiratory function with decreases in respiratory rate (p<0.05). The value of SpO2 as well as FVC, FEV1 were significant higher as compare with its value at H0 (p<0.05). The patients could breathe deeply and cough easily as a result of good pain control. These improvements also were sustained (p<0.05) for the 3 days that the thoracic paravertebral infusion was in used. Obviously, TPVB placement was a technically simple and easier to perform than thoracic epidural placement. Moreover, patients with MRF are often uncooperative during catheter placement due to pain, which makes the less risky paravertebral technique more desirable. Therefore, TPVB is a good option for pain control in blunt chest trauma patients with MRF. Studied in 100 adult patients who were paravertebral for postthoracotomy pain, Richardson concluded that pulmonary function as assessed by PEFR was also significantly better preserved in the TPVB group as compared to the thoracic epidural one [13].

No incidence or complications were seen in this study. Although the number of patients was still small size, but in our opinion, if we followed the technical process closely, can we minimize the side effects and complications. Thus, with high effective analgesia of thoracic paravertebral block that could improve the circulatory and respiratory function for blunt chest trauma patients with MRF and help them faster recovery.

Thoracic paravertebral analgesia for patients with multiple rib fractures provided a good analgesic efficacy at rest and during coughing and improvement spirometry.

The authors declare no conflict of interest.

Copyright: © 2017 Giang NT, et al. This is an open-access article distributed under the terms of the Creative Commons Attribution License, which permits unrestricted use, distribution, and reproduction in any medium, provided the original author and source are credited.