The MRI Features in Patients with Rheumatoid Arthritis Treated with Tocilizumab, in Clinical Remission or Low Disease Activity State

The MRI Features in Patients with Rheumatoid Arthritis Treated with Tocilizumab, in Clinical Remission or Low Disease Activity State

Background: Subclinical inflammation and radiographic progression have been described in rheumatoid arthritis (RA) patients whose disease are in remission or are showing a low level of activity. The aim of this study was to evaluate in patients with rheumatoid arthritis RA in clinical remission or low disease activity (LDA) using composites scores, the synovitis and the bone oedema using MRI by OMERACT RAMRIS score (RAMRIS bone oedema and synovitis RAMRIS).

Methods: In this longitudinal study, were included patients with rheumatoid arthritis according to the American College of Rheumatology ACR 2010 criteria with inadequate response or intolerance to conventional synthetic DMARD, treated with Tocilizumab (TCZ). Sociodemographic characteristics, clinical and laboratory for the disease were collected at baseline (M0) and 06 months (M6) of treatment. Clinical remission was defined by a DAS 28- ESR<2.6, a CDAI<2.8, a SDAI<3.3 and by ACR EULAR criteria. All patients underwent MRI of the dominant hand and wrist. MRI features were evaluated according to the Outcome Measure Clinical Trial in Rheumatoid Arthritis Rheumatoid Arthritis MRI Scoring system (OMERACT RAMRIS synovitis and bone oedema).

Results: 22 patients with RA were included, 19 females (86.4%), with a mean of age 42 ± 13.7 years. The mean disease duration was 8 ± 5.2 years. The mean DAS 28 was 5.8 ± 0.94. Three patients were excluded from the study for serious side effects. At 06 months, the median SDAI was 18 (10-27).The median CDAI was 10 (5-20).The mean RAMRIS score was 2.23 ± 6.33 for bone oedema, 4.76 ± 4.02 for synovitis and 43.32 ± 30 for erosion. Using DAS28ESR as criteria of remission, it did not exist significant differences between the 3 groups of patients (remission/LDA/active disease) for the presence of synovitis on MRI (p=0.43). There was also no difference between the three groups for the presence of bone oedema (p=0.08). Moreover, defining remission by SDAI, CDAI or ACR EULAR criteria, the RAMRIS synovitis and bone oedema RAMRIS did not differ by the level of disease activity. Conclusion: This study suggests that patient in clinical remission or LDA evaluated by composites scores showed inflammation (synovitis and bone oedema) on MRI. Thus clinical remission would be different from the imaging remission. MRI and ultrasound are currently one of the criteria for remission in RA, further studies are needed in particular to determine the threshold definition of remission on MRI.

Various definitions of remission in rheumatoid arthritis (RA) have been proposed [1]. Patients can fulfill clinical criteria for remission, yet still have evidence of synovitis detectable clinically and by ultrasound, and this is associated with structural damage. Stricter remission criteria may more accurately reflect true remission [2]. The aim of the present study was to assess the MRI features (RAMRIS synovitis and RAMRIS bone oedema) in patients with rheumatoid arthritis in clinical remission or low disease activity state based on the DAS28, SDAI, CDAI and ACR EULAR.

In this longitudinal study (24 weeks follow up in an open label) twenty two patients were included from the department of Rheumatology Rabat-Sale university hospital. Inclusion criteria were patients with rheumatoid arthritis according to the American college of rheumatology ACR 2009 criteria.

All patients have had inadequate response or intolerance of DMARDs with no prior biologics treatments. The exclusion criteria were the presence of allergy to any component of Tocilizumab or the presence of indication against MRI.

Sexually active premenopausal women were required to have a negative urine pregnancy test at entry and to use effective contraception during the study period. Three patients were excluded before 24 weeks because of serious side effects. All participants gave written informed consent before screening. The study was approved by the local independent committee of Rabat and complied with the principles of Good Clinical Practice and the Declaration of Helsinki.

Image evaluation: All the MRI were scored for bone oedema , synovitis and bone erosion as defined in the OMERACT MRI RA recommendations [4]. Synovitis: is assessed in three wrist regions (the distal radioulnar joint; the radiocarpal joint; the intercarpal and carpometacarpal joints) and in each MCP joint. The first carpometacarpal joint and the first MCP joint are not scored. The scale is 0-3. Score 0 is normal, and 1-3 (mild, moderate, severe) are by thirds of the presumed maximum volume of enhancing tissue in the synovial compartment.

Bone erosions: Each bone (wrists: carpal bones, distal radius, distal ulna, metacarpal bases; MCP joints: metacarpal heads, phalangeal bases) is scored separately. The scale is 0-10, based on the proportion of eroded bone compared to the ‘‘assessed bone volume’’, judged on all available images-0: no erosion; 1: 1%-10% of bone eroded; 2: 11%-20%, etc. Bone oedema: each bone is scored separately (as for erosions). The scale is 0-3 based on the proportion of bone with oedema, as follows-0: no oedema; 1: 1%-33% of bone edematous; 2: 34%-66% of bone edematous; 3: 67%-100%. Sum scores of synovitis, erosion, and oedema can be calculated by summation of individual joint scores, as a total sum or separately in the evaluated wrist and second to fifth MCP joints, respectively. For synovitis, the possible range of sum scores of unilateral second to fifth MCP joints, wrist joint, and both are 0-12, 0-9, and 0-21, respectively. The corresponding values for bone erosion are 0-80, 0-150, and 0-230 and for bone edema 0-24, 0-45, and 0-69, respectively.

OMERACT RAMRIS was assessed by two rheumatologists with documented experience and high agreement (inter reader intra-class coefficient of correlation (ICC) at 0.82 (CI at 95%:0.80-0.92), intra reader ICC at 0.86 (CI at 95%:0.81-0.96). The assessors were blinded to clinical and laboratory findings.

The assessment of RAMRIS bone oedema and synovitis RAMRIS in patients with rheumatoid arthritis in clinical remission or low disease activity using the CDAI, SDAI and ACR EULAR criteria to determine the level of the disease activity.

The data were expressed as the mean ± SD (standard deviation), medians and inter-quartiles for continuous variables and as frequency (%) for categorical variables. Descriptive analyses were performed to investigate patient characteristics. The Mann Whitney U test and t test for independent groups were used for pairwise group comparisons. The wilcoxon matched pairs rank signed test and t test for paired groups were used to compare baseline values with data at 24 weeks. Correlations were calculated by spearmen or Pearson test according to the distribution of variables. P-values <0.05 were considered significant. The statistical package for social sciences18 (SPSS18) software was used for all data management and analysis. 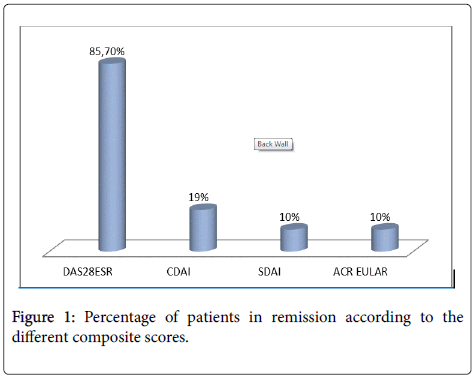 Figure 1: Percentage of patients in remission according to the different composite scores.

Using DAS28ESR as criteria of remission, it did not exist significant differences between the 3 groups of patients (remission/LDA/active disease) for the presence of synovitis on MRI (p=0.67), and their severity (RAMRIS synovitis p=0.50). There was also no difference between the three groups for the presence of bone oedema (p=0.55), and their severity by RAMRIS bone oedema (p=0.55).

Moreover, defining remission by SDAI and CDAI, the RAMRIS synovitis and bone oedema RAMRIS did not differ by the level of disease activity (Table 3).

The results of the present study suggests that there is no difference of MRI data (synovitis and oedema bone) between patients ,treated with Tocililizumab, in remission or LDA using composites scores and patients with disease activity state. Thus clinical remission would be different from the imaging remission.

Rheumatoid arthritis is a chronic inflammatory immune-mediated disease characterized by polyarticular synovitis that can lead to joint destruction with impairment of function and quality of life. With recent improvements in the treatment of rheumatoid arthritis, remission has become an achievable goal for a large proportion of RA patients, and remission is now a defined target in current RA guidelines. However, there is concern about whether current criteria reflect true remission characterized by the abrogation of synovitis and consequently, a lack of radiographic progression [5,6].

Different studies have shown that progression of radiographic joint damage may occur in clinical remission, regardless of the choice of remission definition. This may be explained by subclinical inflammation [7].

Sub-clinical inflammation detected by modern imaging techniques such as ultrasonography and magnetic resonance imaging is present in the majority of patients in clinical remission, and is associated with joint damage and disease activity flare in these patients [8].

The initiative to treat rheumatoid arthritis to achieve remission has impacted clinical practice internationally [5]. The use of composite disease activity measures has been advocated to assess disease in preference to ‘clinical judgment’. There are several composite measures which correlate well, higher values having poor functional and radiologic outcomes, but there remains disagreement in classifying disease activity states. Disease activity score assessing 28-joint (DAS28) versions using erythrocyte sedimentation rate (ESR) and C-reactive protein (CRP) have good correlation but not equivalence but it’s overestimated remission compared to all other criteria [10]. The American college of rheumatology (ACR) and the European league against rheumatism (EULAR) have defined remission as a simplified disease activity index (SDAI) value of ≤ 3.3 (index-based definition). The SDAI is statistically comparable to DAS28, but comparable DAS28 cutoff scores may need downward revision.

However, stringent criteria are needed to define remission status, as some criteria in current use allow for considerable residual disease activity [15,17]. In recent years, ultrasound and magnetic resonance imaging techniques have revealed that a significant percentage of patients classified as being in clinical remission exhibit different grades of synovitis, and a subgroup of these patients suffer flares and/or joint damage during follow-up [6].

Ultrasound and MRI can detect inflammation that predicts subsequent joint damage, even when clinical remission is present and can be used to assess persistent inflammation. Magnetic resonance imaging (MRI) provides a greater sensitivity than clinical examination and radiography for assessing disease activity [7,17]. The role of imaging in the detection of inflammation and subsequent prediction of outcome has been discussed previously. There is good evidence to support the disparity between clinical remission and evidence of ongoing inflammation seen with various imaging modalities. Power doppler activity has been found in 15%-62% of patients in clinical remission according to DAS 28, American college of rheumatology or simplified disease activity index remission criteria, MRI synovitis in 96% and bone oedema in 52%. In one study, 60% of patients in disease activity score remission had increased uptake on scintigraphy. The presence of ultrasound synovial hypertrophy, power doppler activity and MRI synovitis at baseline in clinical remission has been shown to be significantly associated with structural progression at 1 year, even in asymptomatic joints.

In summary, sustained remission is seen in a significant proportion of patients under routine clinical care. However, different remission criteria have different stringencies and the SDAI and CDAI criteria appear to be the most stringent ones currently validated, allowing for only minimal residual joint counts and thus reflecting a state of no active disease more closely than other scores [14].

In the present study, defining remission by DAS 28 or SDAI or CDAI or ACR EULAR criteria, the RAMRIS bone oedema, as well as RAMRIS synovitis did not differ by level of disease. Although MRI and ultrasound are currently one of the criteria for remission in RA, further studies are needed in particular to determine the threshold definition of remission on MRI and therapeutic threshold intervention.

This study suggests that patient in clinical remission or LDA evaluated by composites scores showed inflammation (synovitis and bone oedema) on MRI. Thus clinical remission would be different from the imaging remission. MRI and ultrasound are currently one of the criteria for remission in RA, further studies are needed in particular to determine the threshold definition of remission on MRI.

Copyright: © 2015 Nada B, et al. This is an open-access article distributed under the terms of the Creative Commons Attribution License, which permits unrestricted use, distribution, and reproduction in any medium, provided the original author and source are credited.