Results of this intervention will help to better understand the potential pathogenesis of T2DM. TCM compound preparations of SLP can not only provide a new chain of evidence of regulate intestinal flora of T2DM, but also compare the similarities and differences in transforming the structure of intestinal flora of T2DM patients with acarbose.

With the rapid economic development of china, people's living standards have been improved. However, accompanying chronic diseases have brought great impacts to people's health and the Quality of Life (QOL). According to the data released by the IDF, global diabetes population was 415 million in 2015, and it would rise to 642 million in 2040, with majority of type 2 diabetes [1]. It is known that type 2 diabetes is caused by interaction between genetic and environmental factors, and the pathogenesis of which is not yet completely clarified. In recent years, gut microbiota, the most important symbiotic microorganism system in body, has been confirmed closely related to metabolic diseases. With the further study, gut microbiota is expected to become the new targets for preventing and controlling type 2 diabetes.

More studies have suggested that the increase of diabetes should not be completely attributed to genetic background, changes in diet or physical activity decreases, the gut microbiota may play a more important role [2,3]. Gut is the first gate of absorption and utilization of nutrient. The gut microbiota can not only ferment and convert the indigested carbohydrates into short-chain fatty acids (SCFAs), but also regulate the genic expression and the energetic balance by affecting consumption and storage to participate in the energy metabolism of human body [4,5]. Furthermore, The disorder of gut microbiota structure could increase intestinal endotoxin level and intestinal permeability, promote LPS into blood, cause endotoxemia stimulate inflammatory factor secretion, arouse low grade inflammation, and result in obesity, type 2 diabetes or other metabolic disease finally [6]. Thus, gut microbiota may play an important role in the occurrence and development of obesity, insulin resistance (IR) and type 2 diabetes by participating in the energy metabolism and chronic inflammation. The intervention in intestinal flora may become one method for preventing and controlling diabetes. Studies had shown that probiotics and prebiotics could reduce the LPS level and inflammation, and improve glucose tolerance [7,8]. Transplanting the dung of thin male could improve insulin sensitivity and diversity of fecal bacteria in patients with metabolic syndrome [9]. It has been observed that Acarbose could regulate the gut microbiota, increase the intestinal bifidobacteria abundance, reduce the abundance of enterococcus in type 2 diabetes mellitus (T2DM) patients, meanwhile significantly reduce inflammatory factors and improve glucose and lipid metabolism [10]. Thus it could be seen that intervening in intestinal flora might contribute to the prevention and treatment of T2DM.

Traditional Chinese Medicine (TCM) has unique curative effect and long history in the preventing and controlling diabetes (Xiao Ke). The research, which is on TCM treating type 2 diabetes by affecting gut microbiota, is expected to be a new breakpoint clarifying the functional mechanism of Chinese medicine. Zhang et al. found the intestinal flora diversity in high-fat diet rats reduce under the action of berberine, 175 kinds of bacteria (containing harmful bacteria) declined or even disappeared, yet 93 kinds increased, among which Blautia and Allobaculum increased obviously, these two kinds of bacteria produce short-chain fatty acids. Meanwhile berberine significantly lowered endotoxin level and relieved inflammation [11]. A double-blind randomized, clinical trial (RCT) observed that medium or large dose of Ge Gen Qin Lian Tang reduced FBG, 2h-PGB level and improved IR significantly in T2DM patients. Based on analysis of bacterial type, Ge Gen Qin Lian Tang has also been found to inhibit opportunistic pathogens, such as Alistipes , fake butyrate vibrio, and meanwhile enrich some beneficial bacteria, such as Faecalibacterium which produces butyrate [12]. Besides, number of researches has shown that Chinese medicine functions well on regulating intestinal flora, especially the intestinal flora in human body [13-15]. Therefore, it might be a promising mechanism that TCM improves metabolism through regulating intestinal flora.

Sancai Lianmei Particle (SLP) is a TCM compound preparation. One previous multi-center RCT has indicated that SLP, had satisfying curative effect and security on newly diagnosed T2DM patients with good control of HbA1c and blood glucose in short-term (12 weeks) which was similar to metforminwithout any adverse events (AE). At the same time it improved pancreas islet function and reduced expression of inflammatory cytokines. An interesting phenomenon was observed during the experiment, SLP obviously lowered postprandial blood glucoseFPGbut no good effect on fasting glucose, (unpublished data). However the mechanism stays unclear.

The present study is a randomized controlled trial. We have completed the registration on the Clinical Trial website. The number is ChiCTR-INR-16008440. The Ethics Committee of the Teaching Hospital of Chengdu University of Traditional Chinese Medicine (2015KJ-016) have approved the study design, study protocols and informed consent procedure.

Estimate the sample size and randomly divide qualified patients into experimental and control groups according with the 1:1 proportion. Besides, generate random numbers by SAS statistical software. Next treating patients with SLP in experimental group while acarbose in control group for 12 weeks. Above all, patients should keep their lifestyle and not use any other medicines which may influence the curative effect or the structure of the gut microbiota in the process. It is important to keep a record of various observed index and make a statistical analysis. The specific process of experiment is shown in Figure 1. 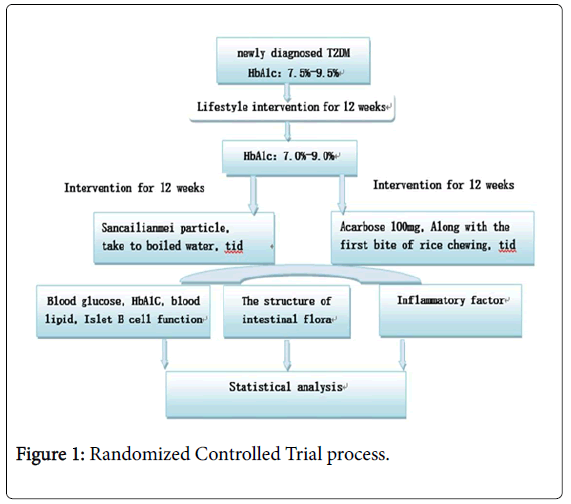 60 newly diagnosed type 2 diabetes outpatients would be recruited from the Endocrinology Department of the Teaching Hospital of Chengdu University of TCM.

The typical symptoms of diabetes (including polydipsia, polyuria and unexplainable weight loss), and in accordance with one of the following conditions.

(2) The other day would be chosen to repeat measuring blood glucose if there is no diabetic symptoms.

In accordance with the diagnostic criteria of T2DM

No drug history or only a short-term (1 month) therapy for treating Type 2 diabetes, drug has been discontinued for 3 months before screening in the group

The Voluntary to participate in the study, and sign the informed consent.

Gastrointestinal disease and (or) periodontal disease

History of liver disease such as cirrhosis of the liver, hepatitis B or hepatitis C (excluding carriers), or the AST and ALT 2.5 times higher than normal ceiling

History of kidney disease or clinical diagnosis of renal insufficiency, serum creatinine is greater than 1.5 mg/dl (including 132.6 mmol/L)

With Other endocrine system diseases, such as hyperthyroidism and disease of grow in quantity of cortisol

Severe trauma, severe infections, surgery, or patients is not completely recovery after treatment

Mental illness, drug or other substance abuse or alcoholics

Allergies or allergic reactions to drugs used in this study

Participants take part in other drugs within three months

History: a history of diabetes, family, medication, complications and treatment

Weight (fasting, in the morning after excretion),

OGTT, Insulin release test: 75 g standard bun for oral administration, detect blood glucose and insulin levels at 0 min, 30 min, 60 min, 120 min, 180 min after feeding, no other food or drink with high heat or xanthine (such as caffeine) are allowed except for water. Glucose tolerance is tested by glucose oxidase method; Insulin releasing test: the chemiluminescence method.

are detected before the lifestyle intervention and at the 0, 12th week of drug intervention

3) The blood samples would be retained of item

according to the test requirements at the 0, 12th weeks of drug intervention; we use the unified detection kit and operate in strict accordance with the kit instructions

(2) The secondary efficacy measures were calculated based on the data obtained from the 0 week and 12 weeks of insulin release as follows:

Sample collection and DNA extraction: collect fresh stool samples in the aseptic boxes at 0 and 12th weeks of drug intervention. Take the sample into the refrigerator of -70oC immediately. Send the samples to the central laboratory for extracting the DNA by QIA amp DNA Stool Mini KitQiagen) and inspecting the quality by Qubit2.0.

Directions and dosage: Three times a day, drink one bag with warm water before each meal.

Basic treatment (For experimental group and the control group): According to "Chinese Diabetes Prevention Guide" (2013 Edition), diabetes education, individualized diabetes diet control and diabetes exercise guidance program would be given to patients.

Each group contains 30 patients. Allowing for the addition of 20% shedding rates, 72 patients would be counted in this small-scale tentative study totally.

SPSS for Windows, version 21.0 (Chicago, USA) will be used for the statistical analyses. Values will be expressed as mean ± SD. Student’s ttest will be utilized to compare indexes between the study groups, Non-normal distribution data using nonparametric test. HOMA relevant indicators for the statistical analysis after taking the natural logarithm. Pearson correlation analysis and partial least squares (PLS) regression analysis will be used to analyze correlation between the intestinal flora with inflammatory factor, blood sugar, blood fat, body mass index (BMI) ,and so on. The significance level will be set at 95% (α=0.05). Intestinal flora using bioinformatics and multivariate statistical analysis (Figure 2). 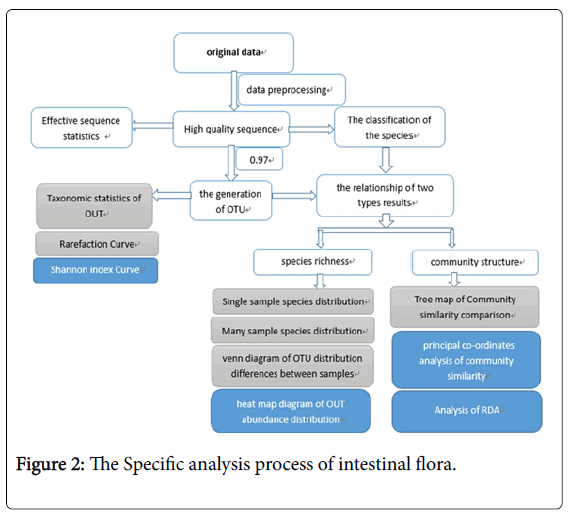 High-quality sequence alignments were performed using Ion Torrent PGM. Sequence clustering by CD-hit and OUT delineation by MOTHUR was performed as described (http://www.mothur.org/). The representative sequences of operational taxonomy units (OTUs) with their relative abundance were used to calculate Rarefaction analysis and Shannon diversity index by MOTHUR. The classification of each samples species identification by MOTHUR (version: 1.31.2).

The phylogenetic tree and the relative abundance table of representative sequences of OTUs were used for UniFrac principal coordinate analysis (PCoA). Redundancy analysis was performed using Canoco5 according to the manufacturer’s instructions. The specific analysis process of intestinal flora is shown in Figure 2.

Results of this intervention will help to better understand the potential pathogenesis of T2DM.T CM compound preparations of SLP can not only provide a new chain of evidence of regulate intestinal flora of T2DM, but also compare the similarities and differences in transforming the structure of intestinal flora of T2DM patients with acarbose.

The authors have declared that no competing interest exists.

Copyright: © 2016 Fang W, et al. This is an open-access article distributed under the terms of the Creative Commons Attribution License, which permits unrestricted use, distribution, and reproduction in any medium, provided the original author and source are credited.