A 56-year-old patient was admitted in consultation for chronic and intermittent abdominal pain. The patient described no changes in bowel habits, or weight loss. Previously was treated by the general practitioner with antalgics and antispasmodic with persistence of the abdominal pain. The medical history reveals one caesarean operation.

On the physical examination there was no abdominal tenderness, palpable mass, and the digital rectal examination was also normal. Laboratory findings were within the normal limits. Chest x-ray and electrocardiogram (ECG) were normal. Abdominal Magnetic Resonance Imaging (MRI) revealed two oval structures well delimited with fatty and linear calcium content on the right pelvic area (22 × 16 mm) and at the level of the right flank (22 × 15 mm) (Figures 1 and 2). 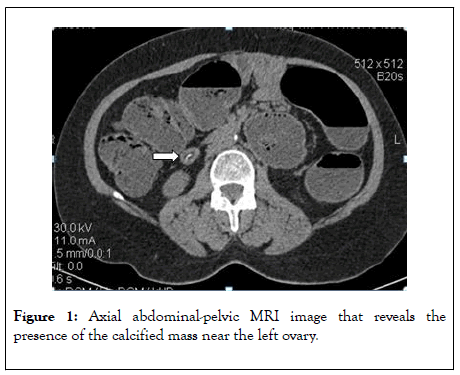 Figure 1: Axial abdominal-pelvic MRI image that reveals the presence of the calcified mass near the left ovary. 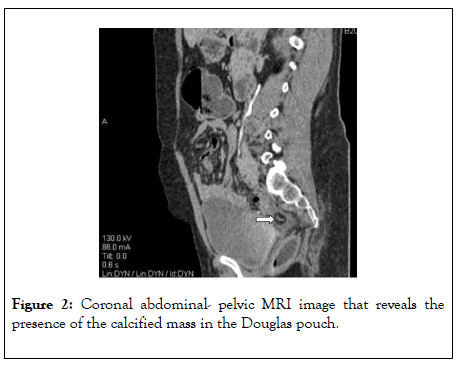 Figure 2: Coronal abdominal-pelvic MRI image that reveals the presence of the calcified mass in the Douglas pouch.

A diagnostic laparoscopy was scheduled. The laparoscopic exploration reveals the presence of two free ovoid and solid in the Douglas pouch and near to the left ovary (Figure 3). The exploration did not reveal any abnormalities. The masses were removed in a retriever bag through the 10 mm umbilical’s trocar incision. The anatomopathological examination found two white oval of 24 mm and 23 mm on the long axis, with bonyhard and smooth surface. The cross section showed a core of necrotic fat tissue with calcifications and a laminated fibrous capsule (Figure 4). Histologically, there was no evidence of cellular tissue. 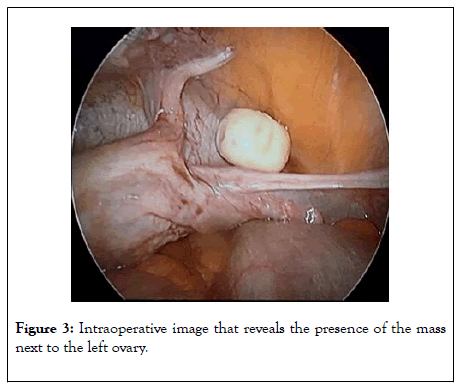 Figure 3: Intraoperative image that reveals the presence of the mass next to the left ovary. Figure 4: Macroscopic image of the mass.

Post-operative course was uneventful. The oral alimentation was resumed on the day of the operation, and the patient was discharged at the first postoperative day. The postoperative follow up revealed a complete remission of the symptomatology.

Fat necrosis is a benign condition that is usually asymptomatic. Free localization in the abdomen is relatively rare [1]. Encapsulated fat necrosis develops more frequently, from the torsion of an epiploic appendage, resulting in a freely mobile fibrotic mass in the abdominal cavity, also known as peritoneal loose body. Mesenteric and retroperitoneal fat necrosis can occur in context of saponification; in pancreatitis, in which the damaged pancreas releases lipolytic enzymes, which auto digestion of the peripancreatic fat tissues [2-4].

Encapsulated fat necrosis may occur anywhere in the body, but it was first described in the breast in 1975 by Schmidt-Hermes and Loskant [5], is thought to be the result from a traumatic or ischemic injury that causes fat degeneration [6]. Although pathogenesis of encapsulated fat necrosis are unclear, trauma and ischemia are supposed to be the first triggering events for the onset of rapid infarction of adipose tissue lobules, which causes an inflammatory cellular response, followed by formation of a fibrous capsule around the necrotic fat [7]. The processes is characterized by a non-suppurative inflammation [8], in which a fibrous connective tissue capsule covers necrotic and degenerated fatty tissue. Trauma-related ischaemia is believed to cause the necrosis of fatty tissue, which gradually detaches from its surroundings [9].

Abdominal fat is well represented on the intraperitoneal and retroperitoneal abdominal compartments, as well as in the subcutaneous tissue [1], abdominal fat necrosis is often found at cross-sectional imaging, commonly secondary to surgery, trauma or pancreatitis [1,9,10]. Its imaging appearance may be complex, with mild mass effect on adjacent structures that may mimic a liposarcoma [11,12]. Benign hypermetabolic lesions, including fat necrosis, may mimic malignancy on FDG-PET/CT studies. Thus, familiarity with the characteristics of fat necrosis is important to avoid the misinterpretation [13]. A number of case reports have documented FDG-PET/CT findings of abdominal fat necrosis after medical or surgical treatment [14-17].

Considering the increased structural tissue destruction that is usually involved in open versus laparoscopic techniques, a higher incidence of fat necrosis formation might be expected in patients who underwent open surgery [18].

Symptomatic free intra-abdominal encapsulated fat necrosis is a rare condition. It may be discovered incidentally on imagery assessment for abdominal pain or during a surgical intervention. Non-specific and misleading symptoms and signs may delay the diagnosis. Surgical treatment can be performed if the symptomatology occurs.

Copyright: © 2020 Gloire a Dieu B, et al. This is an open-access article distributed under the terms of the Creative Commons Attribution License, which permits unrestricted use, distribution, and reproduction in any medium, provided the original author and source are credited.