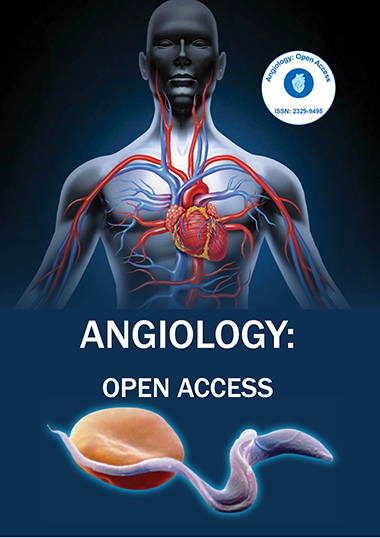 Submitral Aneurysm (SMA) is rarely reported worldwide. It is thought to be caused by weakness in the cardiac musculature due to abnormal embryogenesis. Apart from congenital cause, many other causes have been put forth as its etiology. We are reporting a case of submitral aneurysm secondary to Infective Endocarditis (IE) along with review of literature on IE & SMA.

Infective Endocarditis (IE) affects 3-15/1,00,000 population annually with rising incidence but has significant impact on general population and health sector, and is 4th most common deadly infectious entity after sepsis, pneumonia and intra-abdominal abscess [1-7].

In the pre-antibiotic era, the population at risk belonged to young and middle age group; and common risk factors were congenital heart disease and rheumatic heart disease [8]. But in recent times, commonly affected population is older age group and other reported risk factors are venous catheter, hemodialysis, prosthetic valve replacement, immunosuppression and Intravenous (IV) drug use. Increasing IV drug use over last five decades has increased incidence of IE related hospitalizations. In such cases, risk of IE could be right-sided, left-sided or bilateral [9]. Previously, oral Streptococci were the most common causative isolates, which are replaced by Staphylococci in recent times [10-13].

The pathophysiology of IE can be divided into 4 stages:-

Early diagnosis and prompt treatment improves mortality rate even in the presence of co-morbidities in the elderly patients shown by studies conducted in Italy and in France [21,22]. Since clinical picture is varied in every case, patients presenting with indolent low-grade fever to acute sepsis, heart failure or stroke which does not really help in reaching early or accurate diagnosis. Other less common findings seen are Osler nodes, Janeway lesion, Roth spots and splinter hemorrhage [23]. The modified Duke criteria has lower sensitivity in PVE and Cardiac Device Infection (CDI) [24,25]. The diagnostic approach depending on clinical suspicion and echocardiography together has reduced time to diagnose IE than by using Duke Criteria and the modified Duke criteria [26].

Echocardiography remains a rapid, reproducible, non-invasive and diagnostic test in many cases [27]. Initial recommended test of choice remains Transthoracic Echocardiography (TTE) in patients with either NVE or PVE with sensitivity of 60%-65%; though specificity of TTE is lower for the diagnosis of PVE (ranges from 40% to 70%) when compared to NVE (specificity around 90%). The sensitivity of Trans-esophageal Echocardiography (TEE) ranges between 85%-98%. In a study by Barbieri et al., a good quality TTE was found sufficient for diagnosis in 80% of cases with low level of clinical suspicion [28].

The use TEE is necessary in cases where TTE is positive/non diagnostic, suspected complications (perforation, abscesses and fistula) or presence of intra-cardiac device leads [28,29].

ACC/AHA valvular heart guidelines recommended use of cardiac CT analysis when the anatomy is unclear following echocardiography [24]. The other advantages of cardiac CT over TEE are better evaluation of para ventricular anatomy complications (like mycotic aneurysm/para ventricular abscesses) as well as fewer prosthetic valve artifacts [30-32].

Use of CT imaging for detection of para-valvular lesions and use of [18] FDG PET/ SPECT for PVE is now considered as a major criterion in 2015 ESC guidelines [36]. The use of FDG PET/ SPECT has increased the sensitivity of the Duke criteria without affecting specificity [18,37,38].

IE remained untreatable until the beginning of penicillin use [39,40]. In 1955, AHA advocated use of antibiotic prophylaxis before invasive medical and dental procedures with sole intention of IE prevention. However, antibiotic prophylaxis is restricted to population at high risk of IE and its complications, undergoing invasive dental procedures by AHA in 2007 and by ESC in 2009 whereas U.K. National Institute for Health and Care Excellence (NICE) has recommended no use of antibiotic prophylaxis in 2008. An analysis of medical health care data from 2003 to 2015 by Thorhill et al. has found that a significant increase in IE incidence among high-risk population and a borderline significant increase in moderate-risk population after updated recommendations for antibiotic prophylaxis by AHA in 2007 [41]. The effective and safe treatment for uncomplicated IE by oral Streptococci is a combination of aminoglycoside with penicillin/ceftriaxone for 14 days [42]. An uncomplicated right sided IE by Methicillin Sensitive Staphylococcus aureus (MSSA) is effectively treated by a two week course of penicillin mono-therapy [43]. According to ESC & AHA guidelines for treating methicillin resistant Staphylococcus aureus (MRSA)/MSSA causing NVE, aminoglycosides are no more recommended. IE due to aminoglycoside resistant Enterococcus faecalis can be treated with ampicillin and ceftriaxone [20,36]. 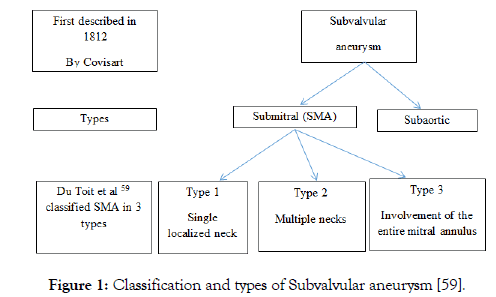 SMA is a rare clinical entity and has reported most often in the African black population [60-62]. This suggests that black population is congenitally predisposed to SMA [61]. But such a racial predilection is relative because cases have been reported from other races around the world. The underlying pathology is defective union of the left ventricular musculature with the atrio-mitral valve area creating potential weak region for formation of aneurysm. Such a defective heart could be a result of abnormal embryogenesis in first trimester of pregnancy. The potential weakness can remain confined to small area measuring few millimeters or can extend to the whole of the posterior mitral annulus at the muscular fibrous junction. The study by Nayak VM on normal human hearts autopsy supported sub-mitral curtain as a congenital cause for SMA [63]. This weakness allows hematoma formation which gets organized over a period of time contained within fibrous walled epicardial aneurysm. A false aneurysm thus formed may expand under high pressure in left ventricle [64,65].

On the contrary, some believe congenital SMA is a true aneurysm since aneurysmal wall is constituted of myocardial tissue [66].

The previously described effects of large aneurysm are-

II. Mitral Regurgitation (MR) due to displacement of PML & the subvalvular apparatus

A 45 year old male presented with history of dyspnea on exertion (NYHA class 3) since one month. Patient was hemodynamically stable on admission. He had no co-morbidities. He was tobacco chewer (for 18-20 years), smoker (4-5 cigarettes/day for 15-16 years) and chronic alcoholic (for 10 years) with very poor oral hygiene. He has six siblings with no history of heart condition or history of sudden death among family members. 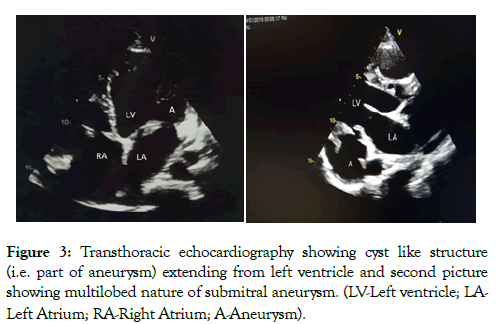 SMA was communicating with Left Ventricle (LV) confirmed by color Doppler. A to and fro blood flow was noticed during color Doppler (Figure 4). 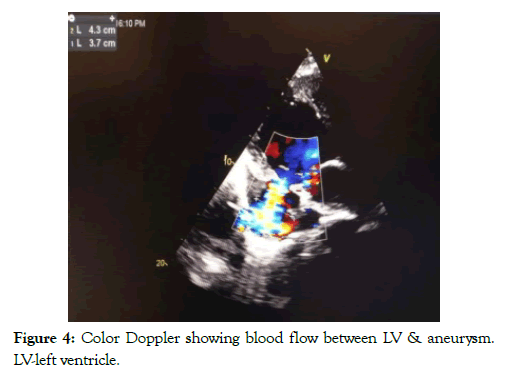 Further LV angiogram was performed which revealed filling of multilobulated cystic spaces below mitral valve (Figure 5). This further confirmed the diagnosis of SMA. Patient underwent mitral valve replacement with 27 mm St Jude mechanical valve and surgical repair of SMA. The vegetation grown on AML was sent for culture and sensitivity which grew methicillin resistant CoNS. Histopathology study of resected mitral valve specimen did not suggest any inflammatory etiology. Patient recovered well after surgery without mitral regurgitation at the time of discharge. • Poor oral hygiene should be considered as risk factor and evaluated by echocardiography to rule out infective endocarditis.

• Presence of infective endocarditis complicates management of submitral aneurysm due to risk of stroke and possibility of spread of infection to aneurysmal cavity further increasing the risk of thromboembolic events.

Copyright: Â© 2019 Shakapur C, et al. This is an open-access article distributed under the terms of the Creative Commons Attribution License, which permits unrestricted use, distribution, and reproduction in any medium, provided the original author and source are credited.