Simultaneous Pulmonary and Coronary Embolism in a patient with Patent Foramen Ovale and Deep Venous Thromboses: A Case Report

Simultaneous Pulmonary and Coronary Embolism in a patient with Patent Foramen Ovale and Deep Venous Thromboses: A Case Report

Introduction: Simultaneous pulmonary and coronary embolism is an unlikely and rare complication of a deep venous thrombosis.
Case Presentation: A 43-year-old African-American, obese, male truck driver, current smoker, and hypertensive, presented with a four day history of shortness of breath and atypical chest pain. He was normotensive, tachypneic, and tachycardic on exam. D dimer was elevated and ABG demonstrated hypoxemia with respiratory alkalosis. Electrocardiogram was significant for sinus tachycardia, right axis deviation and an incomplete RBBB. Troponins were 43.0 ng/ml (reference range: < 0.03 ng/ml). Chest CT angiogram confirmed a massive bilateral pulmonary embolism, and ultrasound demonstrated bilateral lower extremity deep venous thromboses. Coronary angiography demonstrated a large thrombus located at the left main artery and a complete occlusion in the proximal LAD artery.  Thrombectomy was successful.
A PFO was demonstrated by transthoracic and transesophageal bubbles echocardiogram, and a large, mobile and complex thrombus was attached to the PFO and mobilized through the left ventricle. A sequential echocardiogram then demonstrated the migratory event of the thrombus from the right to the left cardiac chambers through a large PFO. Therefore, tPA was immediately administered. Follow-up echo and CT demonstrated only residual clot after thrombolytics. The patient was continued on anticoagulation throughout his stay, but later arrested and died.
Conclusion: Deep venous thrombosis could present with fatal and unexpected complications.  Physicians treating patients with deep vein thrombosis should consider serial advanced cardiac imaging. Debate still exists as to the management of intra-cardiac thrombi.

Simultaneous pulmonary and coronary embolism is an unlikely and rare complication of a deep venous thrombosis. This patient presented with clear signs of pulmonary embolism, but the diagnosis of acute coronary syndrome was more obscure. In addition, an intracardiac thrombus was discovered, leading to a dynamic hospital course. Serial echocardiograms provided invaluable information and were able to capture the complete evolution of a unique disease process. Management of such a scenario is still debatable, as to whether to proceed with thrombolytics or surgery.

A 43-year-old african-american male truck driver, current smoker, and with a past medical history of hypertension and morbid obesity, presented to the emergency room with a four day history of shortness of breath and atypical chest pain. Physical examination revealed normotension, tachypnea of 23bpm, tachycardia of 105 bpm, no JVD, a loud S2, an intermittent gallop-S3, lungs that were clear on auscultation, and legs without cyanosis or edema. Arterial blood gas demonstrated a PO2 of 44 mm Hg with an 88% oxygen saturation on room air, a D-dimer of 4627 ng/ml (reference range: 232< ng/ml), a CK of 2099 IU/L (reference range: 49-397 ng/ml), a CK-mb of 115.3 ng/ml (reference range: .60-6.30 ng/ml), and a troponin of 43.15 ng/ ml (reference range: < 0.50 ng/ml). Electrocardiogram was significant for sinus tachycardia, a right axis deviation and an incomplete RBBB. A subsequent high resolution computed tomography angiography (HR-CTa) of the chest confirmed the evidence of a massive bilateral pulmonary embolism (Figure 1A and 1B). 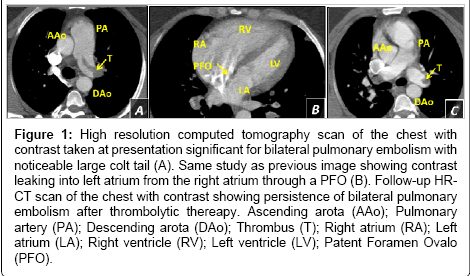 A lower extremity ultrasound confirms the existence of deep venous thrombosis bilaterally. After initiation of anticoagulation, a coronary angiography was performed which demonstrated a large thrombus located at a distal portion of the Left Main (LM) coronary artery and a complete occlusion in the proximal Left Anterior Descending (LAD) coronary artery. Thrombectomy was successful with adequate coronary flow through the LAD.

Transthoracic and transesophageal echocardiogram confirmed the evidence of severe pulmonary hypertension with dilation of right atrium and right ventricle. A PFO was also demonstrated by Doppler echo, and a large, mobile and complex thrombus was attached to the PFO and mobilized through the left ventricle. A sequential echocardiogram then demonstrated the migratory event of the thrombus from the right to the left cardiac chambers through a large PFO (Figure 2A and 2B). A transesophageal echocardiogram confirm the presence of PFO with bubbles (Figure 2C), and also the thrombus was located in the outflow tract of the left ventricle and was fluttering trough the left coronary ostium confirming the source of the embolization (Figure 3A and 3B). Figure 3: Transthoracic Echocardiogram demonstrate a close aortic valve during diasole and a large thrombus located inside the left ventricle outflow tract (A). During systole, the aortic valve is open and the thrombus is flapping through the left coronary ostium, consequence of an embolus and a total occlusion of the proximal left anterior descending coronary artery (B). Coronary ostium (CO); Thrombus (T); Left Ventricle (LV); Aortic Valve (AoV); Aortic Root (AoR).

tPA was immediately administered to prevent recurrent PE. Followup echo and CT demonstrated residual clot after thrombolytics. (Figure 1C) the patient was continued on anticoagulation throughout his stay, but later arrested and died.

The significance of this case can be summarized in three main points: firstly, the complexity of the disease is very uncommon; secondly, there is controversy in this management; and thirdly, the importance of serial echocardiograms to assess the evolution of the case.

The unique presentation in this case was that of a clinically stable patient without significant complaints who was at critical risk of demise in an unpredictable fashion. The patient was now at risk for recurrent PE, cryptogenic stroke, recurrent MI, or embolization into the systemic circulation.

With such an unpredictable thrombus, it’s challenging to find the optimal time to administer thrombolytics and even more difficult to decide the best modality to treat when thrombolytics fail to resolve a thrombus.

The bilateral deep venous thrombosis caused a massive pulmonary embolism and as a consequence an increment in the pulmonary pressure. The severe pulmonary hypertension causes dilation and dysfunction of the Right Ventricle (RV) and a dilation of the Right Atrium (RA). The presence of the PFO was confirmed by echocardiogram (Figure 1C), and the attachment of a large, and mobile thrombus was visualized by echocardiogram. An active migration of the thrombus from the right heart cavities to the left side was demonstrated, causing embolization through the coronary arteries (Figure 3A and 3B).

After administering thrombolytics, subsequent echocardiogram showed that the thrombus greatly resolved and was in the PFO. A remnant of the thrombus was found in the control HR-CTa. The DVTs and PEs remained unchanged. Therefore, the IVC filter was kept in place and the patient was anticoagulated with Coumadin. Although non-significant, cases have indicated a trend toward improved survival with surgery in patients with a massive pulmonary embolism in presence of a biatrial/straddling thrombus caught in transit across a PFO [1-6]. The most favorable strategy in these situations remains debatable due to the lack of cases reported and investigations into this rare disease process [7-12]. The patient in the presented case was treated non-surgically, with autopsy results showing no sign of a cardiac thrombus or embolization. The likely cause of death in this case is dysrhythmia. This case is unique in its presentation, with DVT embolization to the pulmonary arteries, coronary arteries, and multiple cardiac chambers in the setting of a patent foramen ovale. The question that arises is whether earlier thrombolytic treatment was necessary or perhaps surgical intervention since the patient was of a young age.

Deep venous thrombosis could present with fatal and unexpected complications. There is still great debate in regards to surgical versus nonsurgical management of patients which have cardiac thrombi originating from the deep venous system. Due to low probability of the involvement of the coronary system, this case provides for a very rare case of multiple complications. The hemodynamic stability of some patients who have experienced deep venous thromboses cannot be an indicator of future events as the patient may have a drastic change in outcome that gives no prior warning. Patients need to be observed very cautiously with multiple and repeat imaging modalities to follow the trajectory of cardiac thrombi in the setting of a DVT.

Copyright: © 2013 Farhang P, et al. This is an open-access article distributed under the terms of the Creative Commons Attribution License, which permits unrestricted use, distribution, and reproduction in any medium, provided the original author and source are credited.