Objectives: We recently identified the ratio between absolute neutrophils count and absolute lymphocyte count, NLR ≥ 2, combined to ISS as a predictor of progression free survival (PFS) and overall survival (OS) in patients younger than 65 years with symptomatic Multiple Myeloma (MM). We retrospectively examined the NLR-ISS in 165 consecutive smoldering Myeloma (sMM) accessed our Center between January 2004 and June 2014.

Conclusion: We could not confirm previously proposed parameters to predict time to treatment using the new definition of sMM. However, ISS and its improved variants R-ISS and NLR-ISS were able to identify patients in stage I with excellent outcome at 60 months. Prospective larger series are needed to use R-ISS to identify high-risk sMM.

More than fifty years ago, Alexanian et al. described twenty patients affected by Multiple Myeloma (MM) with low tumor mass disease who were asymptomatic, with a hemoglobin level greater than 10 g/dL, and with not more than 3 lytic bone lesions or compression fractures or recurrent infection. These patients were defined as having an indolent MM [1]. Since then, the two terms of Smoldering and Indolent myeloma were variably used in an undefined manner until 2003 when the IMWG defined smoldering MM (sMM) as BMPC ≥ 10% and/or M protein level ≥ 30 g/L and lack of end organ damage (CRABhypercalcemia, renal failure, anemia, and bone lesions) [2].

SMM is distinguished from MGUS based on the level of serum M protein and the percentage of clonal BMPCs. SMM accounts for about 15% of all the patients with newly diagnosed MM [3] and the risk of progression to symptomatic MM is higher compared to MGUS patients (10% per year versus 1% per year, respectively) [4,5].

The disease definition of sMM was recently updated to exclude patients with bone marrow plasma cells of 60% or higher, serum involved/uninvolved FLC ratio of ≥ 100, and those with 2 or more focal lesions (typically indicating focal bone marrow abnormalities) on magnetic resonance imaging [6]. Such patients have an approximately 40% per year risk of progression and are now considered as MM [6].

Since ISS does not take into account the role of the tumor microenvironment in sustaining MM recurrence and long-term survival in MM is associated with a distinct immunological profile [9,10], we recently investigated the neutrophil to lymphocyte ratio (NLR) in active MM patients treated up-front with novel agents [11]. We found that NLR-ISS could predict at diagnosis three groups (verylow, standard-risk and very-high risk) with the 5-year estimates for PFS at 39.3%, 19.4% and 10.9% and 95.8%, 50.9% and 23.6% for OS [11].

SMM is a biologically and clinically heterogeneous disease. Unfortunately, at this time, there is no single pathologic or molecular feature that can reliably distinguish patients with sMM who have only premalignant plasma cells from those with a clonal malignant disease. The evaluation of the risk of progression to symptomatic disease, actually based on some parameters derived from retrospective studies to be validated in prospective series [12].

The only two models validated in prospective interventional trials, respectively from Mayo Clinics (based on serum M protein and the extent of bone marrow involvement [4]) and the Spanish group (based on presence on an aberrant plasma cell immunophenotype in >95% of clonal PCs and immunoparesis [13]) do not overlap and there are many patients that are differently classified according the two models. Dispenzieri and colleagues have shown that the prognostic value of the initial Mayo Clinic model can be improved by adding the serum FLC ratio as a variable [14].

The aim of our study was to define in a single-center retrospective series of sMM patients identified according the new IWMG criteria the prognostic meaning of clinical variables available in the routinely clinical practice and ISS, R-ISS and NLR-ISS to predict time to first treatment for progression in active myeloma.

Our retrospective analysis included 165 sMM patients evaluated at the AOUP Vittorio Emanuele, Catania between January 2004 and June 2014. All patients provided written informed consent before entering the study, performed in accordance with the Declaration of Helsinki. Ten patients were excluded for presence of bone lesions at MRI or plasma cell infiltration greater than 60%, considered as active MM according to the last recommendation consensus.

Twenty-eight patients were excluded for lack of FISH analysis, due to artefact in samples or insufficient material, or missing sFLC evaluation. Thus, the analysis was limited to a cohort of 127 patients with median follow-up of 50.7 months (range 26.2-110.4).

In all patients, complete blood count (CBC) and routine biochemical examinations were taken at diagnosis and NLR was calculated using data obtained from the CBC differential count.

Logistic regression was used to evaluate the time to first treatment for active MM (TTT) from the time of inclusion in the study.

Qualitative results were summarized in counts and percentages. Descriptive statistics were generated for the analysis of results and a pvalue under 0.05 was considered significant.

The Kaplan–Meier method was used to estimate progression-free survival (PFS) and OS. PFS was defined as the maximum time from either the start of diagnosis or the start of treatment date to the occurrence of death from any cause, disease progression or relapse, or censored at the date of last contact.

We identified 127 patients with sMM defined accordingly to the updated IMWG guidelines [6]. Baseline characteristics of patients are listed in Table 1.

Table 1: Characteristics at diagnosis of 127 sMM.

An abnormal karyotype was observed in about one third of cases. High-risk chromosomal abnormalities were observed in 6/127 (5%) patients.

By definition, beta-2 microglobulin and albumin to assess ISS stage, FISH and LDH to assess R-ISS and NLR levels were available for all the patients.

As previously shown for active MM at diagnosis [11], a higher NLR did not correlate with ISS stage, plasma cell infiltration or an adverse karyotype, neither uninvolved/involved sFLC ratio ≥ 8 (Figure 1). 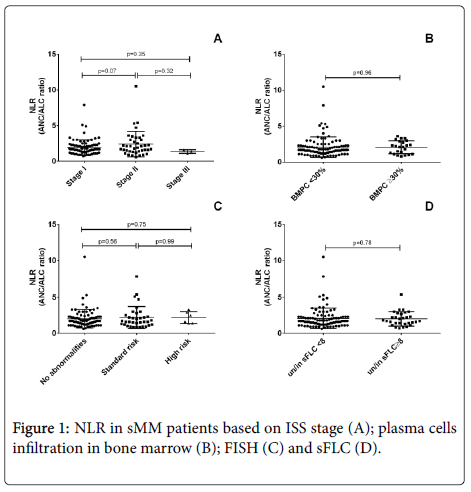 Figure 1: NLR in sMM patients based on ISS stage (A); plasma cells infiltration in bone marrow (B); FISH (C) and sFLC (D).

In multivariate analysis, LDH and beta-2 microglobulin were weak but significant independent predictors of outcome (Table 3).

Table 3: Coefficients and Standard Errors of Cox proportional-hazards regression to predict time to treatment at 60 months in sMM.

Since both are part of R-ISS, we applied ISS, R-ISS and NLR-ISS to identify TTT at 60 months (Figure 2).

A recent study indicates that the risk of progression is extremely high (approximately 90% at 2 years) when the BMPC is ≥ 60%, and these patients are now considered as MM. The amount of BMPC is evaluated on either the bone marrow aspirate or biopsy examination, and in case of discrepancies the higher of the two values should be used [6].

Bone disease detectable by (MRI) is able to predict TTP in sMM. However, patients with more than one focal lesion at MRI should no longer consider as sMM but as MM according to the current IMWG criteria [6].

In the study of 93 patients with SMM, Perez-Persona and colleagues found 60% of patients with SMM have an aberrant immunophenotype similar to MM [14]. The risk of progression in such patients was significantly higher compared to those, who had a lower rate of aberrancy in the detected BMPC population; median TTP was 34 months versus not reached for patients with 95% or greater versus less than 95% aberrant PC, respectively. Among the clinical variables we could not include immunophenotyping and circulating PC in our analysis because not routinely available in our center.

Thus, risk-scores actually available are based on retrospective series that included about 10-15% of subjects currently considered symptomatic MM. Despite the effect of such changes on the estimates is considered minimal for the low proportion of patients upstaged from SMM to MM [4], we used in our analysis the new, most stringent definition of sMM. Moreover, each model appears to identify unique patients as high risk, with some but not complete overlap [21] justifying the need of additional models easily reproducible in large scale in both retrospective and prospective series.

In multivariate analysis only serum albumin and LDH were independent factors able to predict time to treatment, suggesting applying the actual scores for MM risk stratification, ISS and R-ISS. In this study NLR was not a predictor of outcome in univariate analysis, but our previous observations showed that its prognostic impact should be limited to young patients, in which compromised immune system has not yet altered by advanced age [11]. Thus, we tested NLRISS because ISS and NLR are easily available for all patients at diagnosis. NLR-ISS could distinguish patients in stage I with excellent outcome, with TTT at 60 months of 91.9%.

R-ISS was the best prognostic score, able to distinguish patients in stage I and stage II with TTT at 60 months respectively 92% and 62.7%.

The standard of care for SMM is observation until development of symptomatic MM, but there are ongoing attempts to give earlytreatment to high-risk sMM patients that have an approximately 50% risk of progression within 2 years [22]. The Spanish group has recently showed the superiority of combination of lenalidomide and low-dose dexamethasone (Rd) versus observation in a phase III clinical trial enrolling 120 patients with high risk sMM [23]. In general, novel agents will be tested in the setting of high-risk sMM for their low toxic profile and high response rate. Thus, largely applicable models that could identify easily patients that could benefit of early treatment enrolling in a clinical trial are needed. Our analysis shows that R-ISS and NLR-ISS could help to identify the setting of high-risk sMM.

Copyright: © 2016 Romano A, et al. This is an open-access article distributed under the terms of the Creative Commons Attribution License, which permits unrestricted use, distribution, and reproduction in any medium, provided the original author and source are credited.