Objective: The aim of this study was to compare patients with schizophrenia to normal individuals as regard retinal micro vascular caliber and to correlate it with disease duration and psychometric sub-scores.

Materials and Methods: Observational analytic case control study included 60 subjects distributed as; Group A: Thirty patients 20-40 years, were recruited consecutively (convenient sample) from the inpatient ward of Kasr Al-Ainy Psychiatry and Addiction Hospital diagnosed to have schizophrenia according to the diagnostic criteria of the 4th edition of Diagnostic and Statistical Manual of Mental Disorders-text revised according to Structured Clinical Interview for DSM-IV (SCID) Axis I Disorders, on medications only. Group B: Thirty subjects who matched the patients group in age, sex and education, with no history of psychiatric disorders or other medical conditions that may affect their retinal vessels (hypertension, diabetes mellitus, and ophthalmological diseases, chronic systemic or autoimmune illnesses). They were recruited from inpatient wards of other departments of Kasr Al Ainy hospitals matched for age and gender with patient group. Ophthalmic examination including: BCVA, slit-lamp examination, fundus examination and retinal fundus photography was done for both patients and controls. Psychometric assessment using PANSS is done for patients group.

Results: The mean diameters of retinal venules and arterioles were wider than that of the control group with statistically significant differences.

Schizophrenia is a chronic, severe, complex, highly disabling psychiatric disorder. Its underlying neurobiology remains largely unclear. Objective biomarkers that can be used to diagnose schizophrenia are important goals in schizophrenia research [1]. As shown by previous studies; there is clear evidence that visual perception deficits and early visual processing abnormalities are associated with schizophrenia [2,3] . Some retinal parameters may be used as biomarkers of neural abnormality, and disease severity in schizophrenics. This was proved by increased retinal venules diameter, decreased retinal nerve fibre layer thickness, dopamine abnormalities, abnormal retinal output detected by Electro Retino Graphy (ERG). Hence, there is a need for better understanding of the effect of retinal pathology on cognitive disturbances in schizophrenia [4].

Retinal vessels as a surrogate marker for cerebral vessels

The micro vessels of the retina, heart and brain are similar; they are structurally and functionally homologous because they share similar embryological origins. The condition of the retinal micro vessels can be used to predict the condition of that in the heart and the brain [5]. Imaging techniques of the retina facilitated measurement and assessment of retinal vasculature [6]. Embryo logically, retina and diencephalon, share a similar vascularization pattern. Also, there is a close correlation between retinal and brain blood supply [7].

Furthermore, retinal circulation includes ganglion cells and optic nerve shares origin and drainage with the cerebrovascular circulation. The retinal vessels passing across its inner surface originate from the ophthalmic artery of the internal carotid artery and drain to the central retinal vein then the superior ophthalmic vein to the cavernous sinus [8].

The inner diameter of retinal micro vessels is the most studied parameter in cerebrovascular diseases. Previous studies found a link between narrow arterioles and hypertension, while wide venules were associated with high risk of stroke, schizophrenia and dementia. So, retinal venial calibre can be promising tool to assess micro vascular abnormalities in schizophrenia. Wider venules may indicate micro vascular structural damage secondary to defective brain supply of oxygen [9]. The aim of this study was to compare patients with schizophrenia to normal individuals as regards retinal micro vascular calibre. It also highlighted its correlation with disease duration.

This was an observational case–control study accepted by the Cairo University research ethical committee, with respected tents of Declaration of Helsinki. All patients received a written informed consent with proper explanation of the design and aims of the study.

The study included 60 subjects (30 patients and 30 controls) distributed as; Group A: (Patients’ Group) recruited consecutively (convenient sample) from the inpatient ward of Psychiatry and Addiction department diagnosed to have schizophrenia according to the diagnostic criteria of the 4th edition of Diagnostic and Statistical Manual of Mental Disorders- text revised (DSM IV-TR) and Group B: (Controls’ Group) with no history of psychiatric disorders or other medical conditions that may affect their retinal vessels (hypertension, diabetes mellitus, ophthalmological diseases, chronic systemic or autoimmune illnesses) [10]. They were recruited from other departments matched for age and gender with patients’ group.

For the patients’ group: Male patient’s eliminates the sex-related differences [11]. Age 20-40, to reduce the confounding effect of aging on retinal structural changes, taking into consideration that retinal arteriolar and venial diameters are narrower in older than in younger people [12], diagnosed as schizophrenics following the Structured Clinical Interview for DSM-IV Axis I Disorders (SCID) [10] on medications only. For the control group: Male subjects who matched the patients’ group in age.

The two groups were subjected to Ophthalmological examination: Including best corrected visual acuity, slit lamp and fundus examination. Imaging was performed in the form of

Topcon TRC-50DX fundus camera device was used to capture all fundus photographs of both patient and control groups. The device is equipped with Nikon D-90 camera with 12.3 effective megapixels and built-in flash. Fundus images of both patient and control groups were blindly coded during the process of assessment of vessel width. This process was divided into 2 phases:

Phase 1: VAMPIRE (Vessel Assessment and Measurement Platform for Images of the Retina) annotation tool which is equipped with semi-automated software for Vessel segmentation and extraction was used in extracting micro vascular tree. The software can be obtained after filling in and returning the VAMPIRE non-commercial licence on the website: http:// vampire.computing.dundee.ac.uk/tools.html [13].

Meanwhile the patient group was further subjected into 2 ways. 1- Semi-structured interview derived from the kasr AL-Ainy psychiatric interview with emphasis on socio-demographic data, past history and family history. 2- Psychometric assessment: Positive and Negative Syndrome Scale (PANSS) which is a clinically standard interview that monitor positive and negative symptoms, as well as the severity of general psychopathology of schizophrenics within a previous week.

Statistical Package for Social Sciences SPSS, version 16 was used. The data was summarized in the form of mean and standard deviation. Categorical data was presented in frequency tables. Subjects were distributed into schizophrenics and controls. We used chi-square test of person (X2) for the difference between qualitative and Student’s t-test for the difference between quantitative data.

Correlation: Pearson correlation test was used to measure the degree of relationship between two or more characteristics of a population [14].

Ethical considerations: Enrolment of the participants was on voluntary basis and after approval of the Ethical and Scientific Committee. An informed consent was presented to the 2 groups participating in the study with explanation of the purpose of the study.

The study included 60 subjects Group A (30 patients) and Group B (30 controls). There was no significant difference between both groups as regards age, Slit lamp, BCVA and fundus examination. In the schizophrenia group, the mean age of onset of illness was 22.82 years, the mean duration of illness was 7.35 years, and the mean duration of untreated psychosis was 2.38 years. Table 1 shows the demographic and clinical data of both groups. We observed that most of schizophrenics were single and not working, the mean retinal venules diameter in patient’s group was wider than that in the healthy group with a statistically significant difference. Also, it shows that mean retinal arteriole diameter of schizophrenics was wider than the normal subjects with a statistically significant difference. Table 2 illustrates different PANSS values of schizophrenics. Table 3 illustrates the correlation of age of patients, age of onset of illness, duration of illness and duration of untreated psychosis with their retinal vascular diameters, there was a significant negative correlation between the diameter of retinal venules and both age of patient (r= -389, p= 0.034) and duration of illness (r= -481, p= 0.007). The correlation between disease duration and retinal venules diameter is highlighted in Figure 1.

Table 2: The different PANSS score in the schizophrenia group.

Table 3: Correlation between age, age of onset of illness, duration of illness and duration of untreated psychosis and retinal vessels diameter (venules and arterioles) in patients with schizophrenia. 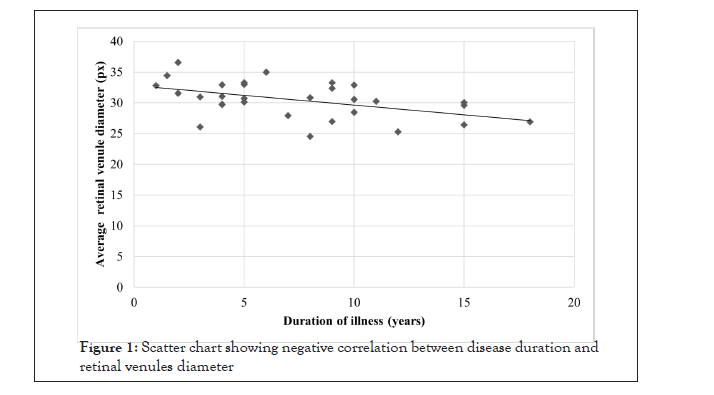 Table 4: Correlation between retinal vessel diameter (venules and arterioles) and each of the PANSS subscores in patients with schizophrenia.

In the present study most patients were not working, while in the healthy control group, only a few participants were not working, with a statistically significant difference between both groups. This difference may be attributed to the lack of motivation and cognitive deterioration present in schizophrenia which may have led to the functional impairment and unemployment in the patients’ group [15] Regarding the marital status in this study, a significantly higher percentage of patients were single in comparison to the control group, which may be explained by the affection of social skills and lack of emotional reciprocity in schizophrenia as well as the low rate of employment, making them unable to support a family and thus reducing the rate of marriage in the patients’ group [16].

In this study, the average diameter of retinal venules was wider in schizophrenics than in healthy subjects with a statistically significant difference. This was consistent with the results of the Dunedin study where they followed a population from birth. Schizophrenics showed increased inner venular diameter that indicates insufficient oxygen supply to the brain [17]. The explanation is not well understood. However, some studies observed that venules showed inflammatory reaction, endothelial dysfunction, nitric oxide pathway abnormalities and hypoxia 9. Such conditions have all been described in schizophrenia. Such observation is consistent with our results, that retinal venular diameter in schizophrenia patients was negatively correlated to the duration of illness; i.e., the retinal venular diameter probably becomes wider as a part of the process of neuro inflammation in the first episode of psychosis and the early years of illness, however, it gradually decreases with chronicity of the disease as the neuro inflammation associated with the first episode of psychosis subsides.

The average diameter of retinal arterioles in this study was wider in patients with schizophrenia than that in healthy control subjects. This can be a part of the inflammatory vascular process associated with schizophrenia. Medical and laboratory exclusion of other factors that might influence this finding was done. This suggests that wider retinal vessels calibre can be considered one of schizophrenia features and not due to coinciding condition. Schizophrenia patients showed retinal micro vascular abnormalities, specifically wider venial calibre. This could be an indicator of inflammation, endothelial dysfunction, hypoxia or ischemia.

• The clinical heterogeneity of the patients included, being in different stages of the illness, however, this allowed us to study the retinal changes associated with a wider spectrum of psychopathology severity.

• In this study the duration was calculated according to time of presentation whereas the actual onset may be months or years earlier.

.• Antipsychotic medications effect was not excluded during data collected in the study.

Copyright: © 2022 Khalil DH, et al. This is an open-access article distributed under the terms of the Creative Commons Attribution License, which permits unrestricted use, distribution, and reproduction in any medium, provided the original author and source are credited.