The beneficial effects of Hepalatide, an inhibitor of sodium taurocholate cotransporting polypeptide (NTCP), on the progression of nonalcoholic steato hepatitis was previously validated in mice. The underlying mechanismsare presumably associated with the profile changes of bile acids, which are natural agonistsfor FXR and TGR5receptors. In this short communication, the profile of bile acids and the metabolic changes in the liver or peripheral tissues were analyzed. It is our anticipation that using NTCP inhibitors, such as Hepalatide for the nonalcoholic steatohepatitis would be a clinically-applicable strategy

Bile acids are synthesized in the hepatocytes and re-circulated between the liver and the intestine in a process so-called enterohepatic circulation. A number of investigations have confirmed the signaling role of bile acids in regulating metabolism by activating receptors, such as nuclear receptor farnesoid X receptor (FXR), membrane receptor G proteincoupled receptor (TGR-5), which prompted development of different kinds of bile acid-derived analogues, such as obeticholic acid, INT767, for the treatment of metabolic syndrome. Although the effects on glucose control or lipid regulation of these bile acid derived analogues on FXR or TGR-5 receptors are validated in vivo and clinically, safety profiles of these analogue candidates are inevitably concerned since these two receptors are broadly distributed in various tissues.

Under a physiological condition, only a small portion (up to 5%) of bile acids are leaked into serum, in which the concentration of total bile acids remains at a low level (0-10 μM) and fluctuates with prandial rhythm [1].

NTCP is responsible for conjugated bile acid reabsorption in the liver. Hepalatide is a peptide specifically binding to this receptor, although the binding site is unclear, since the NTCP is a receptor with 9 transmembrane domains, leading to an elevation of serum bile acids (mainly conjugated bile acids) in healthy subjects (Figure 1). Correspondingly, bile acid synthesis in the liver and its flux in the intestine are changed. Therefore, the metabolic effects are expected with the elevation in serum bile acid concentration due to regulation and redistribution of bile acid as signaling molecules through the receptors mentioned above. 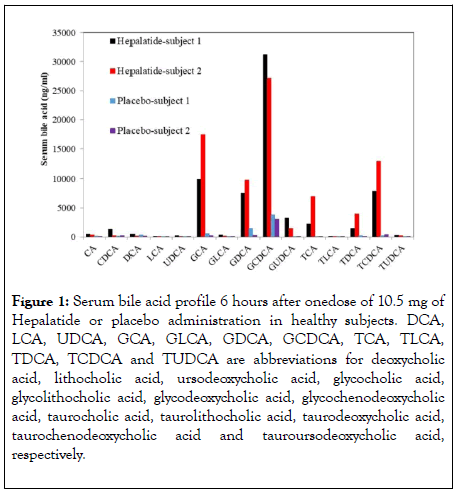 In mice fed with high fat/Calorie diet plus high fructose/ glucose in drinking water (HFCD-HF/G) for 16 weeks, treating with Hepalatide for late 8 weeks ameliorated the progression of nonalcoholic steatohepatitis (NASH) as reflected by significant improvement of hepatocellular steatosis and serum transaminase levels. Unexpectedly, serum levels of total bile acids were decreased at the end of the experiment while they were markedly increased in the liver with a significant profile alteration. Of note, conjugated bile acids, such as taurochenodeoxycholate (TCDCA), taurodeoxycholate (TDCA), appeared to be elevated significantly in comparison with the control mice. In rats and humans, Hepalatide treatment resulted in an increase in serum bile acid levels in a dose-dependent manner, and the similar effects were seen in mice treated with Hepalatide for up to 8 weeks of HFCD-HF/G feeding (data not shown). Administration with Myrcludex B, another inhibitor of NTCP with a structure similar to Hepalatide, in patients with hepatitis B and D coinfection resulted in elevated serum levels of bile acids [2]. Therefore, it appears that possible effects of bile acid in peripheral tissue are hardly predicted in mice since these natural receptors of bile acids are expressed in many tissue types, such as adipose tissue, skeletal muscles, and the latter cannot be excited by bile acids. It was reported that serum bile acid levels in NTCP knockout mice were increased at first 1-2 months and tended to be normalized at late 10-20 months of their life. A similar pattern of bile acid profile was also found in human subjects with p.Ser267Phe variants, in which human NTCP mutation resulted in the failure of bile acid uptake during the early life after being born; however bile acid levels in some of them were gradually returned to a normal range [3]. Moreover, a clinical study by administration of Myrcludex B for up to 48 weeks at a maximum dose (10 mg/day) demonstrated that bile acid levels were elevated during the treatment, and sustained till the drug was withdrawn [2,4], indicating that the treatment with the NTCP antagonist for 48 weeks would not compensate for the inability of bile acid absorption. The mouse body weight was inversely correlated with serum bile acid levels, and that is in line with what was seen in the NTCP knock-out mice [5]. Based on this observation, it is speculated thatthe modulating effect of Hepalatide treatment on metabolic syndrome could well be expected.

Levels of various bile acids in the liver were significantly increased after administration of Hepalatide. It caused an elevation of much higher concentration of bile acids in the liver, at the same time resulted in measurable benefits, such as lower liver weight, improved histological score, lipid metabolic correction, attenuated liver injury and minimized hepatic fibrosis in comparison to HFCD-HF/G-fed mice. Strikingly, HFCD-HF/Gfeeding caused severe apoptosis in the liver; whereas, Hepalatide treatment nearly reversed necroptotic lesion back to normal, suggesting the protection of the liver from damage by oxidation of excessive fatty acids. It seemed that high dose of Hepalatide did not exert extra benefit comparing with what was seen in the low-dose group, and sometimes even caused elevated liver enzyme levels in this model. Therefore, when a mild increase of bile acid levels in the liver occurs, Hepalatide exerts to ameliorate the metabolic stress. Hepalatide treatment decreased total cholesterol (TC) levels in mouse liver. Furthermore, a phase I clinical trial in healthy subjects after administration of Hepalatide for 7 days decreased serum TC with a primary component of LDL in a dose-dependent manner, indicating the pronounced effect on lowering cholesterol. Hepalatide treatment tremendously altered the profile of bile acids in the liver. Cholic acid (CA) is the most abundant FXR ligand, two primary bile acids, i.e., α- and β-muricholic acid(MCA), derived from chenodeoxycholic (CDCA) and their tautro-counterparts were increased more than 10-fold in the high-dose group in this study. In humans, CDCA was identified as the most potent FXR ligand (CA in mice), The glycol- and tauro-counterparts of CDCA and DCA in human serum were dramatically increased after administration of Hepalatide. This increased concentration of bile acid may act on FXR.

Hepalatide treatment improved insulin resistance [6]. Serum insulin levels and HOMA-IR index decreased in a dosedependent manner. It showed that high-dose of Hepalatide is beneficial for glucose control and insulin release in this model. This is in line with the result in Zuckerdiabetic obeserats induced by high-fat diet. In these rats, pancreas cells were maintained or increased, and the capability of insulin excretion was improved (not published) by Hepalatide administration. The hyperglycemic effect may be improved by releasing GLP-1 through binding of bile acid to TGR-5 in the intestine [7]. A study in mice with bile duct ligation (BDL) confirmed the notion that bile acids may enter enterocytes from the basolateral side at a high concentration by treatment with Myrcludex B [3]. The released GLP-1 promotes insulin synthesis. Although the high-dose treatment of Hepalatide did not lead to a profound decrease in serum glucose level, it appeared that Hepalatide treatment significantly improved intraperitoneal glucose tolerance test (IGTT). Of note, blocking NTCP did not decrease blood glucose in normal mice and healthy subjects, indicating the absence of hypoglycemia event, which is considered to be the most serious adverse event.

There are several kinds of pharmacological strategies targeting bile acid transport and signaling in treatment of metabolic disorders, such as FXR agonists, TGR agonists, FGF19 agonists, resins or ASBT inhibitors. And all of them exert metabolic modulation by interfering with bile acid enterohepatic circulation, suggesting the importance of bile acids in metabolic signaling mechanisms. Some of drug candidates possess beneficial effects as well as adverse effects, such as elevated LDL, pruritus. Hepalatide was initially validated to be effective in metabolic regulation, especially in ameliorating liver injury, and the concern in terms of the side effects of elevated serum bile acids was negligible since NTCP knock-out mice and p.Ser267Phe mutant human subjects did not show any physiological abnormalities except elevated plasma bile acids. Comprehensively, the effects of Hepalatide in NASH treatment seem promising although its mechanisms and the signaling pathway remain to be further studied.

Copyright: © 2020 Fan C, et al. This is an open-access article distributed under the terms of the Creative Commons Attribution License, which permits unrestricted use, distribution, and reproduction in any medium, provided the original author and source are credited.