Proof-of-Principle, Open-Label Prospective Cohort Trial of a Novel Nutraceutical for the Prevention of Refractory Migraine

Proof-of-Principle, Open-Label Prospective Cohort Trial of a Novel Nutraceutical for the Prevention of Refractory Migraine

Objective: To estimate the possible effectiveness of a novel nutraceutical for the prevention of attacks of migraine.

Conclusion: This preliminary trial suggests the intake of the novel nutraceutical to significantly reduce the burden of migraine in two thirds of patients with refractory disease, particularly in subgroups with 21 or less episodes in 6 months.

It is estimated that approximately 17% of women and 6% of men suffer from migraine, but only 12% of them take migraine-preventing medication, though another 17% use medications with potential anti-migraine effects for other medical reasons [1]. First line preventive medicinal treatments are beta-blockers, tricyclic antidepressants, calcium channel blockers, anticonvulsants, and less commonly ergot-alkaloids and the derivative methysergide. However, a number of patients fail to respond to these “standard” preventive treatments and are considered refractory [2]. Rational combination therapy [3], treatment of co-morbidities, avoidance of modifiable risk factors, and the use of non-pharmaceutical food supplements have been recommended [4-10], while medication overuse should be discouraged [11,12].

Many theories attempt to explain the pathophysiology of migraine. Most recently the role of calcitonin gene-related peptide (CGRP) has become the focus of research. This peptide is a potent vasodilatator and can function in the transmission of pain. Its implication in the pathogenesis of migraine [13] may lead to the development of antagonists that may be used as new therapeutic agents for migraine [14]. At the other hand, proton ((1)H) and phosphorus ((31)P) magnetic resonance spectroscopy has revealed major reduction of high-energy phosphates production in the occipital lobe of migraine-without-aura patients [15-17], suggesting the presence of a mitochondrial component in the physiopathology. The latter findings corroborate the hypothesis of Burnstock [18] on the importance of purinergic signalling in the brain [19,20] and its deregulation in the pathophysiology of migraine.

More than a decade ago we have introduced a nutraceutical food supplement for the treatment of infertile men with asthenozoospermia that enhances energy production by the sperm mitochondria [23]. Later we successfully prescribed a similar product to patients with chronic fatigue syndrome/myalgic encephalopathy [24]. Several patients spontaneously reported a reduction of the number of migraine attacks, their duration and intensity during intake of the nutraceutical. Therefore, we undertook a proof-of-principle prospective trial to assess the possible benefit of the nutraceutical food supplementation in patients primarily consulting for refractory migraine.

Fifteen consecutive patients, 13 women and two men (father and son) consulting at the private clinic of each one of the co-authors were included in this open-label, prospective cohort trial. They presented with refractory migraine of at least 6 months duration. The mean age at intake was 41.3 years (SD 10.4 years, range between 24 and 59 years). After history taking and thorough investigation and treatment of comorbidity, the patients were invited to participate in the trial and received add-on treatment with a nutraceutical food supplement containing balanced amounts of vitamins B6, B9 and B12, pine bark extract, astaxanthin from Haematoccuspluvialis, the extract of Lepidiummeyenii (Maca), l-acetyl carnitine, ubiquinone Q10, zinc picolinate and selenomethionine (Improve®, Nutriphyt, Oostkamp, Belgium)(formulation in annex), and fish oil rich in docosahexaenoic acid (DHA; 22:6ω3) and eicosapentaenoic acid (EPA; 20:5ω3)(Omarin®, Nutriphyt, Oostkamp, Belgium). The patients were requested to return for control and follow-up visits after 3 and 6 months of treatment.

Statistics were performed with the MedCalc statistical programme (MedCalc, Ostend, Belgium) [25]. Since the number of observations was low and the distribution of the results was not Normal for all variables, both parametric tests (mean and standard deviation) and non-parametrical tests (median and 95% confidence intervals) were applied. The non-parametrical Wilcoxon test for paired observations was used to calculate the statistical significance of changes during treatment. Also the receiver operating characteristic (ROC) curve was plotted and analysed in order to assess the clinical usefulness of treatment (Area under the Curve), and to identify the criterion value optimally differentiating between patients who did or did not benefit from treatment [26].

In the majority of patients the migraine occurred without aura, and it was triggered by hormonal events, namely the menstrual period (6 out of 13 women), or by sleep deprivation (3 cases), or by loud noise (2 cases), or by specific food ingredients (2 cases). Several patients presented significant comorbidity including Bechterew’s disease, so-called chronic Lyme’s disease, neuralgia of the major occipital nerve (Arnold), irritable bowel syndrome, insulin resistance, hyperparathyroidism, or chronic fatigue syndrome. 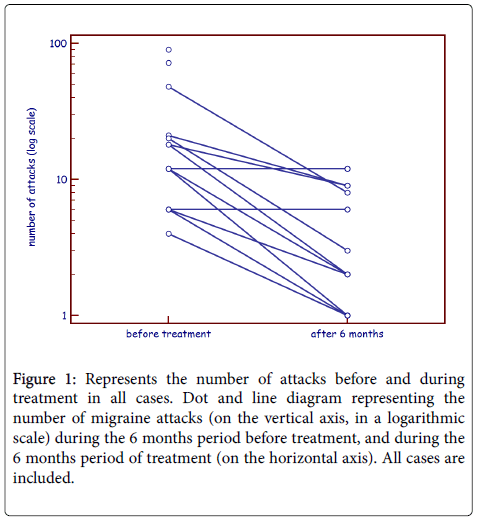 The mean number of attacks in the period before treatment was significantly higher in the non-responder (46.8, SD: 35.1) than in the responders (12.3, SD: 6.6) (P=0.002), whereas the mean duration of the attacks was similar (1.35, SD: 0.40 days in non-responders, compared to 1.75, SD: 0.2 days in responders, P=0.26). In the ROC curve analysis of the responders compared to non-responders, the area under the curve was 0.80 (P=0.021), with sensitivity 100, specificity 60 at criterion value of 21 migraine attacks during the 6 months before treatment. None of the patients with number of attacks exceeding the criterion value benefited from treatment.

Several publications have reported a favorable effect of nutraceutical food supplementation on the severity of migraine. In the present approach we have aimed at activating the mitochondrial function and increasing the generation of adenosine triphosphate (ATP) by giving carnitine. The nutriceutical formulation also included the anti-oxidant carotenoid Astaxanthin and the oxido-reductase ubiquinone Q10. The pro-anthocyanidine in pine bark extract exerted a predominantly anti-inflammatory activity. Lepidium extract (Maca) was added because of its phyto-adaptogenic effect increasing the production of the protective heat shock protein HSP72 in response to stress. The combination of Vitamins B6, B9 and B12 reduced the homocysteine concentration [27-29] which has been related to migraine. Zinc-picolinate plays a pivotal role in immunity and inflammation [30] and as modulatory factor of brain function [31], whereas selenium-methionine may add an epigenetic effect reducing DNA-methylation [29,33]. In addition, the long-chain poly-unsaturated fatty acids docosahexaenoic acid (DHA) and eicosapentaenoic acid (EPA) were given, since these provide the substrate for the Krebs metabolic cycle in the mitochondria generating ATP (adenosine triphosphate). This unique combination of ingredients was proven to be well-tolerated and not to cause any side effects.

All patients received treatment of their co-morbidity before initiation of the trial, whenever possible. One third of the patients did not report any favourable effect of the nutraceutical, with the number, duration and severity of migraine attacks remaining unchanged. These patients had a higher frequency of attacks than those who did respond to treatment. In fact, the food supplementation failed to exert any beneficial effect in a subgroup of patients with more than 21 attacks in the six months preceding inclusion in the trial. This confirms the findings of the American Migraine Prevalence and Prevention Study in patients with high-frequency migraine [22], and may suggest that the pathophysiological mechanisms could be different in these patients. In two thirds of the cases the nutraceutical intake was associated with a significant decrease of the number and duration of migraine attacks over the 6 months treatment period, reducing the burden on well-being caused by the disease.

This is an open-label prospective trial in a limited number of patients with migraine attacks refractory to classical treatment modalities. The number of cases is small because of the preliminary character of the trial, which aimed at proof-of-principle at the one hand, and the stringent criteria for the selection of patients included at the other hand [2]. However, the small number of cases should raise caution regarding the generalisation of the conclusions, and it seems indicated to start a double-blind, preferentially multi-centre, trial on a larger number of patients. This novel nutraceutical having no side-effects, it could be safely tested as add-on therapy.

A novel nutraceutical food supplement given to patients suffering from refractory migraine was successful in decreasing the number and duration of attacks in two third of cases, particularly among those with less than 21 attacks in 6 months. Since this supplement did not cause any side effects it may be considered as add-on treatment, though further trials are needed.

The first author is holder of the patent of the nutraceutical. The second author declares no conflict of interest.

Copyright: © 2015 Comhaire F, et al. This is an open-access article distributed under the terms of the Creative Commons Attribution License, which permits unrestricted use, distribution, and reproduction in any medium, provided the original author and source are credited.