Hypothesis: Since cataract is more prevalent in the diabetic population, the authors compared the findings of the gold standard Lens Opacity Classification System III (LOCSIII) with the Scheimpflug objective measures in a presenile population.

Methods: This was a cross-sectional study of diabetic patients between 50 and 60 years old. Patients answered a questionnaire about clinical conditions, complications, medications in use and demographics, and were submitted to a complete non-dilated and dilated ophthalmological evaluation, including a Scheimpflug lens densitometry (Pentacam Nucleus Staging) and the Lens Opacity Classification System III (LOCSIII) based evaluation. All patients signed an informed consent term.

Conclusions: Corrected visual acuity in the majority of patients was normal and they mostly had non-proliferative diabetic retinopathy. LOCS III remains an earlier and less expensive method of cataract diagnosis. Different cataract morphology seems to relate to different systemic complication, although this finding must be confirmed by further studies.

Cataract is the lens opacity of the eye that may cause significant loss of visual acuity and is the leading cause of avoidable blindness (48% of cases) worldwide. The most common form of cataract is senile cataract, which typically affects people over the age of 60 years with strongly increasing incidence in each successive decade of life. This may be related to the fact that despite progress made in surgical techniques, cataract cannot be prevented or treated pharmacologically [1].

The gold standard test for the diagnosis of cataract classification is the Lens Opacity Classification System III (LOCSIII). LOCSIII was validated in 1993 and is based on slit-lamp pictures and retro illumination (Figure 1). It is an important method in clinical practice, especially considering healthcare policy, where low-cost methods are necessary. However, this method is susceptible to the interpretation of the examiner, which can compromise its reproducibility [9-12]. 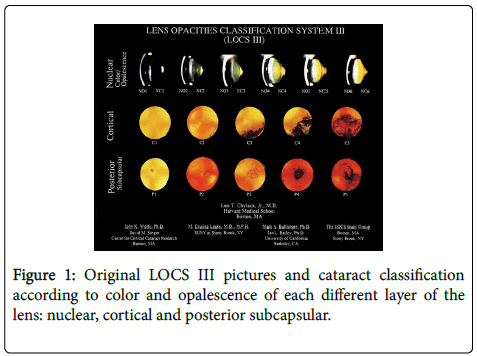 Figure 1: Original LOCS III pictures and cataract classification according to color and opalescence of each different layer of the lens: nuclear, cortical and posterior subcapsular.

In turn, the Scheimpflug system uses modern technology in the early diagnosis of cataract [8,13]. Studies suggest that Scheimpflug measurements can provide early diagnosis of cataract in addition to automatic staging. It is a non-invasive method that allows the study of the anatomy and biometry of the anterior segment of the eye. The Scheimpflug camera captures the eye's anterior segment, creating a three-dimensional precise image, which determines the depth and angle of the anterior chamber, and the thickness, density and positioning of the lens, in a fast and reproducible manner [14,15]. 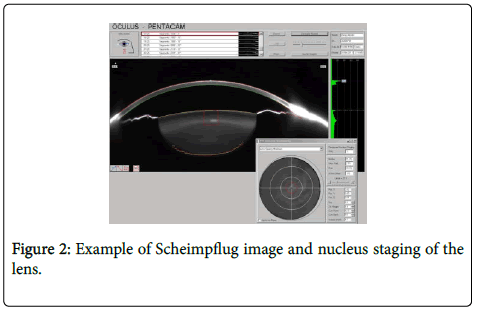 Figure 2: Example of Scheimpflug image and nucleus staging of the lens.

The aims of the present study are to determine the prevalence of cataract in a presenile diabetic population, to compare the findings of the LOCSIII clinical evaluation with the Scheimpflug objective measures and to register other possible diabetic complications that may relate to different cataract types.

This is a cross-sectional study of 43 diabetic patients referred to the Ophthalmology Service after clinical evaluation at the Endocrinology Service of Hospital Nossa Senhora da Conceição, Grupo Hospitalar Conceição, Ministry of Health (HNSC-GHC-MH), in Porto Alegre, Brazil from 2011 to 2014. Eligibility criteria were as follows: age between 50 and 60 years old, the ability to provide information about eyesight and agreement to answer a questionnaire about demographics, diabetic complications and other medical diagnosis and treatments used. After freely signing the informed consent and answering the questionnaire all subjects underwent a comprehensive eye examination, including uncorrected and corrected visual acuity, refraction, applanation tonometry, dilated slit-lamp and fundoscopic examination.

Patients were then submitted to the Scheimpflug lens densitometry using the PNS program (Pentacam Nucleus Staging) to classify nucleus opacity between 0 and 5 and were also classified according to the Lens Opacity Classification System III (LOCSIII), considering density 0-6 for nuclear, cortical and subcapsular cataracts [16]. In all patients, LOCS III was assessed by the same ophthalmologist, who was blinded for the Pentacam results.

The following variables were assessed: duration of diabetes, corrected and uncorrected visual acuity, the presence or absence of diabetic retinopathy and its classification according to the ETDRS [17], last glycosylated hemoglobin value, smoking history, medications in use, gender, and race. The presence of other diabetic complications (heart, kidney and neurological), classified according to the DCCT (Diabetes Control and Complications Trial) /EDIC (Epidemiology of Diabetes Interventions and Complications) research groups were also assessed [18].

Pearson's chi-square test was used for categorical variables and Student’s T-test was used for continuous variables. Multiple logistic regression was used to control for confounding variables. Descriptive data were evaluated by the nonparametric Mann-Whitney test for independent variables. The p-value was considered significant if alpha <0.05. The computer and statistical analysis support was provided by consultants in Education Management and Research of HNSC.

The project was approved by the Ethics in Research committee of HNSC-GHC-MH. The patients involved were not subjected to any additional risks in the routine care and treatment of cataract, which were routinely applied.

The presence of diabetic retinopathy was associated with nephropathy (p=0.001) and with the likelihood of being on insulin treatment (p=0.000) (Table 5).

The increase in lens thickness and opacity that accompany aging are widely known, and diabetic patients are predisposed to present earlier with cataract. An objective and standardized classification system that can accurately reflect lens changes is thought to help in the cataract surgery decision making process [19]. The present study compares Scheimpflug automatic staging pictures with the gold standard, cataract slit lamp LOCS III, in presenile diabetics. Similar studies have not been performed before.

Recently, Pei et al. showed a significant correlation between cataract detection using LOCS III and Pentacam; however, their study was limited by the use of a single "peak value" of lens density and not the PNS. According to previous studies, Pentacam was able to make an early diagnosis of cataract [9,19]. The present study does not confirm this idea because the same patient had a more opalescent lens at the slit-lamp evaluation than in Scheimpflug pictures, which means that Pentacam takes a longer time to identify nuclear cataracts and consider them denseless. Another disadvantage is that PNS is only for nuclear cataract grading, while LOCS III also classifies cortical and/or subcapsular cataracts.

This work is original, as the authors were able to establish different relationships between cataract formation and diabetic complications; similar findings could not be identified in literature. Different systemic conditions relate to different cataract ratings and densities ranging from nuclear to cortical and posterior subcapsular layers. The use of insulin and the presence of kidney disease are highly-related to cataracts and diabetic retinopathy. Patients with renal failure are apparently more likely to present with earlier blindness than patients with ischemic heart disease or peripheral neuropathy, constituting a risk group for ophthalmologic complications. Corrected visual acuity in the majority of patients was normal and they mostly had nonproliferative diabetic retinopathy: a wonderful and unexpected finding for diabetic patients over 50 years of age and approximately 10 years of disease, treated in public health from a third world country. We could not find any similarly designed studies with which to compare our results.

According to the current research, Scheimpflug cameras are an objective and expensive technique that are more helpful in following cataract evolution than in early or population-based diagnosis. LOCS III remains an earlier and less expensive method of cataract diagnosis.

We thank the following endocrinologists who referred the patients to us: Dr. Maria Amélia Alves de Campos, Dr. Fernando Azambuja Filho and Dr. Iracema Cunha Gonçalves. We are also grateful to the Education, Management and Research Committee of HNSC (GEPGHC), who provided financial support.

The authors declare no conflict of interests.

Copyright: © 2017 Gus PI, et al. This is an open-access article distributed under the terms of the Creative Commons Attribution License, which permits unrestricted use, distribution, and reproduction in any medium, provided the original author and source are credited.