Obstructive sleep apnea (OSA) is a common sleep disorder classically characterized by apneic events that lead to intermittent hypoxia and sleep fragmentation. Its consequences are serious, mainly in terms of quality of life and cardiovascular risk. Orthognathic surgery of the maxillomandibular advancement has increased in popularity as a treatment option for OSAS due to the increase in the entire velo-oro-hypopharyngeal air system. A modified osteotomy is indicated for patients with severe obstructive sleep apnea who already have a prominent profile. In these cases, it is necessary to advance the suprahyoid muscles without changing the facial profile. The genioglossus is crucial to maintaining a pharyngeal patent in the air due to the anterior traction of the tongue. The advancement of the genioglossus muscle has been reported as an option for the surgical treatment of obstructive sleep apnea syndrome, which through its traction can increase the retrolingual airway without altering facial or dental appearance. The present study aims to report a clinical case of a female patient (N.M.A.T.), 52 years old, presenting complaints of lack of concentration and fatigue on light effort, OSAS confirmed by polysomnography and snoring. On facial tomography, retrognathism and reduction of the upper airways were observed. Orthognathic surgery with counterclockwise rotation of the maxillary-mandibular complex, associated mandibular and maxillary advancement was the treatment of choice, associated with the advancement of the genioglossus muscle through modified osteotomy in the anterior portion of the mandible. The virtual planning was carried out for the case, with the preparation of pre and transoperative guides and with the purpose of visualizing the growth of the airways. The patient improved his facial profile and airways due to anterior muscle traction, evolving without complaints.

Obstructive sleep apnea (OSA) is a common sleep disorder classically characterized by apneic events that lead to intermittent hypoxia and sleep fragmentation [1]. There are two types of OSA: obstructive sleep apnea syndrome (OSAS) and central sleep apnea syndrome (CSAS). OSAS is a prevalent disorder in which there is snoring, repetitive apneic episodes and daytime sleepiness. Obesity and craniofacial anomalies (such as retrognathism or micrognathism) are the main causes of upper airway obstruction, which can lead to apnea [2].

Patients with obstructive sleep apnea syndrome (OSAS) usually suffer from numerous harmful conditions, such as cardiac arrhythmias, cardiac arrest, sudden death, systemic inflammation, and endothelial dysfunction. Although the etiology and pathogenesis of OSAS are not fully understood, anatomic obstruction and increased resistance in the posterosuperior airway are known to cause OSAS [3].

Continuous Positive Airway Pressure (CPAP) improves airflow and quality of life for patients. However, because of the cumbersome use of CPAP, patients often decline or do not adhere to this treatment. Intraoral device therapy is an effective alternative in mild to moderate OSAS cases. Most of the oral appliances used in clinical setting are mandibular advancement devices, keeping the mandible and its attached musculature in a prominent position. Maxillo-mandibular advancement surgery has increased in popularity due to the increase of the entire velooro- hypopharyngeal airway system, with 75% to 100% success in correcting OSAS [4,5].

The advancement of the genioglossus muscle was reported as an option for the surgical treatment of obstructive sleep apnea syndrome [6]. Genioglossus is crucial in maintaining an airborne pharyngeal patent due to anterior tongue traction. The advancement of the genioglossus muscle and the hyoid suspension are relatively conservative techniques that can enlarge the retrolingual airway without occlusion alteration, facial or dental aesthetics. These techniques are also associated with lower morbidity than procedures such as glossectomy and linguoplasty, which directly modify the base of the tongue [7]. 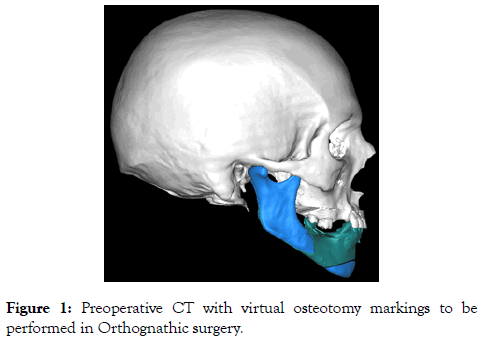 Figure 1: Preoperative CT with virtual osteotomy markings to be performed in Orthognathic surgery. 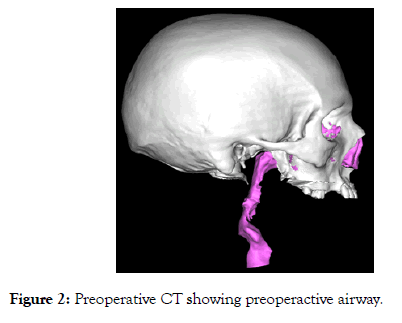 The planning of the surgery was performed virtually, associated to the preparation of customized preoperative guides, providing surgery with greater predictability (Figure 3). The patient had a profile with important mental projection, which required a change in the conventional planning of mandibular advancement. A modification was chosen, where an osteotomy was performed in the anterior region of the mandible, followed by joint bone traction to the adhered muscles, fixing it in a prominent position, however, without altering the mental projection of the same, providing an improvement in facial profile (Figure 4 to 7). 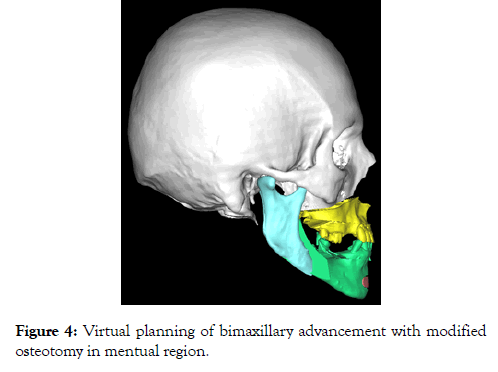 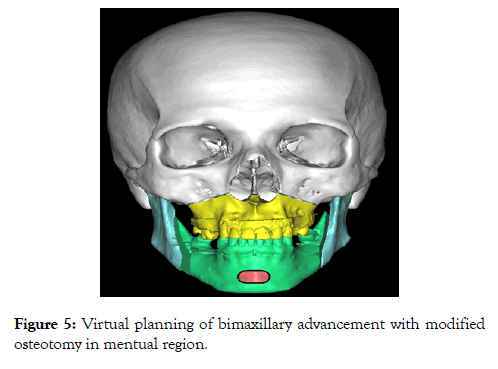 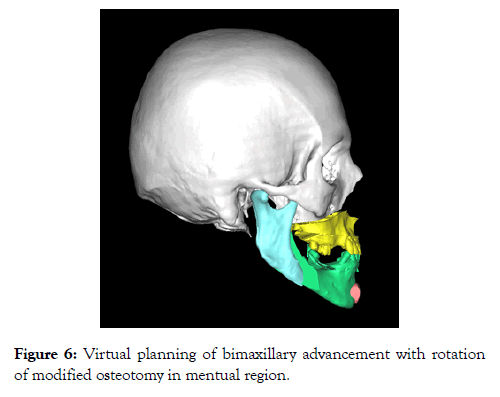 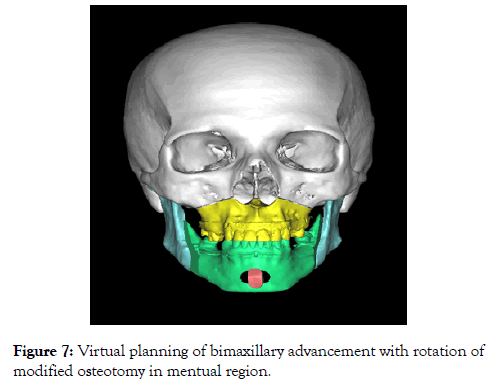 The surgery was performed under general anesthesia, without complications (Figure 8 to 14). In subsequent follow-up, the patient reports improvement in respiration and end of complaints of snoring, tiredness and daytime sleep. A harmonic facial profile was obtained and the patient was followed up without complaints (Figures 15 to 17). Figure 9: Fixation for sagittal osteotomy of the left mandibular ramus. Figure 10: Fixation for sagittal osteotomy of the right mandibular ramus. Figure 11: Fixation of the anterior bone block of the mentual region in a new position. Figure 12: Traction of the anterior bone block of the mentual region with the adhered Genioglossus muscle. Figure 13: Traction of the anterior bone block of the mental region with the adhered Genioglossus muscle. 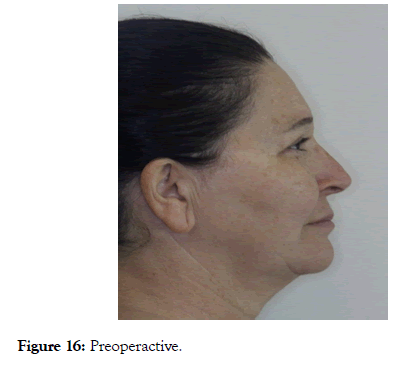 In 1969, tracheostomy was reported as an effective surgical modality in the treatment of OSAS, completely ignoring airway obstruction in the pharyngeal region. However, tracheostomy is associated with frequent complications such as infection, vocal problems, tracheal stenosis and negative psychosocial impact. Ikematsu, in 1964, proposed uvulopalatopharyngoplasty (UPPP) for the treatment of habitual snoring [8]. In 1979, Fujita et al. described the initial results of UPPP in OSAS patients and quickly became the treatment of choice [9]. Subsequently, the high failure rates (approximately 50%) of UPFP led to the start of mass use of orthognathic surgery for the treatment of OSAS [7], whose treatment was chosen in this case report.

Dentofacial deformities are considered a major risk factor for obstructive sleep apnea-hypopnea syndrome (SAHSO) in nonobese patients and include mandibular and maxillary retrognathism, tongue retroposition, and an increase in the lower third of the face. Mandibular retrognathism may be one of the factors that reduce posterior air space and decrease the distance between the hyoid bone and the mandibular plane, promoting obstruction in the hypopharynx [10].

Surgical correction of obstructive sleep apnea syndrome (OSAS) involves the understanding of several parameters, of which the anatomical three-dimensional (3D) airway is important. Recent advances in upper airway visualization based on concomitant computed tomography (CBCT) and specific 3D manipulation programs have been of great help in understanding normal and abnormal airway conditions and their response to surgery [5. In this case, by CT scan analysis, it was possible to clearly observe the upper airway obstruction present and the postoperative result obtained.

The use of nasopharyngolaryngoscopy can help to identify regions in the airway that may have influence on nocturnal obstruction (nose, retropalatal area and base of the tongue). In addition, it is useful to identify other causes of upper airway obstruction, such as tumors, cysts, lingual tonsils, and laryngeal pathology [5].

Orthognathic surgery is widely used to correct facial and maxillary discrepancies in which position, aesthetics or functional capacity are in disharmony [11]. Associated with orthognathic, nasal surgical procedures such as septoplasty and lower concha reduction can be performed in favor of increased airspace [5].

The upper airway can be opened by advancement mentoplasty, but this can compromise the facial aesthetics by superimposing the prominence of the chin. To overcome this difficulty, a modification of the osteotomy is an option, allowing a repositioning that allows the advancement of the genioglossus muscle, avoiding excessive projection of the chin, preserving a harmonic profile [12].

A modified osteotomy in ment is indicated for patients with severe obstructive sleep apnea who already have a prominent developing profile. In these cases, it is necessary to advance the genital muscles without altering the facial profile [13]. In patients with relatively harmonic profile, as in this case report, it is opted for modifications in the standard technique to avoid biprotusion.

During normal breathing, contraction of the upper airway and diaphragmatic muscles act synchronously to maintain airway permeability, avoiding hypoxemia and hypercapnia. The genioglossus muscle is crucial in maintaining a pharyngeal patent. It serves as one of the main determinants of language position. Electromyogram (EMG) studies evaluating the genioglossus muscle in patients with OSAS versus control showed an increase in the tone of the muscle during inspiration while awake, avoiding airway occlusion. When sleeping this activity decreases and obstruction occurs [7].

The treatment of OSAS is important because of the complications that this syndrome can generate, from changes in the quality of life to the important cardiological/neurological alterations. Knowledge of the syndrome, relevance of anamnesis, clinical examination and attention to the patient's complaints guide the best treatment for the patient, promoting an ideal outcome with a good prognosis.

The virtual planning of the case promotes great surgical predictability, shortening of operative time, reduction of risks of accidents and complications, besides allowing an individualized treatment for each case. Orthognathic surgery is one of the forms of treatment of OSAS, presenting satisfactory results in the short, medium and long term.

Copyright: © 2020 Silva FBNN, et al. This is an open-access article distributed under the terms of the Creative Commons Attribution License, which permits unrestricted use, distribution, and reproduction in any medium, provided the original author and source are credited.