The aim of the work was to evaluate the occurrence of diseases in two carrier pigeon holdings with different prophylactic plans at the beginning and at the end of flight season. During the flight season, the pigeons completed 14 races at a distance of 140 to 1200 km. In the first holding (A), antibiotics and corticoids were applied at regular intervals in order to maintain health, while in the second holding (B) were used products based on plant extracts and essential oils during the race season. Based on clinical and laboratory examination of faecal samples and oropharynx swabs was obtained a general overview of the prevalence of the most common diseases with regard to their clinical manifestations. The most marked increases in parasitic and infectious agents were observed at the end of the season in both holdings. Despite different prophylactic plans, the prevalence of coccidiosis and trichomoniasis was increased at the end of the racing season on both farms, when the increased incidence of nematodes Ascaridia spp., Capillaria spp. and ornithosis complex was also confirmed. By comparing the prevalence of individual diseases, a lower incidence of coccidiosis, trichomoniasis and ornithosis complex was observed in breeding A, in which the breeder applied antibiotics. The results of the study point to the phenomenon of immunodeficiency. Although the incidence of monitored diseases on farm A with antibiotic treatment was reduced, the continuous administration of various drugs, particularly antibiotics and corticosteroids, aimed at maintenance of optimum condition of pigeons may impair their homeostasis, pH, and intestinal microflora. This opens the way for pathogens such as Salmonella, which was confirmed in our study.

Pigeons have accompanied people since time immemorial and today they are a favourite hobby of many breeders due to their attractive way of flying, endurance, loyalty to home and almost perfect orientation in a foreign environment. Increased stress during the race is an important factor that significantly affects their health. The accumulation of a large number of pigeons in one place during their transport increases the potential for transmission of infectious agents, which may later be reflected in reduced performance of birds, increased disease incidence and reduced immunodeficiency [1,2].

The breeders should keep their competitors in good health so they could perform according to expectations. The owner of the pigeons is also responsible for their health and satisfaction in terms of animal protection. Disease prevention and early diagnosis of health disorders are particularly important for delivering good performance and minimizing the risk of disease spreading to other individuals (Figure 1) [3]. 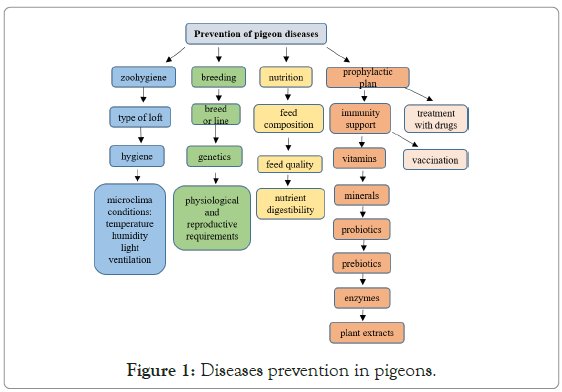 One should not forget that improper feeding and insufficient prophylaxis are common predisposition factors for the development of any disease. The responsible pigeon breeder must take into account the sports performance of his charge (distance and difficulty of the flight route) and have an idea what to expect from the next race. Based on these facts, he should then compile an adequate prophylactic plan and outline compound feed for a particular pigeon [4].

The aim of this study was to evaluate the incidence of the most common diseases of homing pigeons during the racing season and their impact on health and performance of these birds.

During the race season, two pigeon lofts with different prophylactic programs were monitored. In the loft A, treatment and prevention were based on the use of broad-spectrum antibiotics based on sulphonamides, tetracycline, ampicillin, erythromycin, streptomycin and corticoids, while in loft B, natural-based preparations in the form of plant extracts, organic acids and essential oils were used. Clinical examination of the health of each pigeon at the beginning and end of the race season was performed according to Kimpe et al. [5]. Faecal samples and oropharyngeal swabs were obtained from both lofts from 60 pigeons at the beginning and from 45 pigeons at the end of the race season due to the loss of some birds. Based on clinical signs and laboratory examination, the diagnosis of individual diseases of pigeons was obtained (Figures 2-4) [6-8]. Figure 2: From left: Canker and ornithosis in pigeons. Figure 4: Clinical symptoms of infected pigeon with Sallmonelosis spp.-joint form. Note: Clinical examination of the dove showed palpable feathers, reluctance to fly, weakness, mild dehydration, swelling of the humero-ulno-radial joints with stained cloaca with yellow-green faeces. After unsuccessful treatment with chloramphenicol, an autopsy was performed with sampling for culture and pathogen confirmation.

The flotation technique of Dranzo et al. was used to detect coccidiosis and nematodes from faecal samples [9]. Determination of trichomoniasis from oropharyngeal swabs as well as detection of ectoparasitosis was performed according to Letková et al. [10]. The diagnosis of salmonellosis was made on the basis of clinical signs, autopsy of dead individuals and culturing the samples on buffered peptone agar and on Mac Conkey medium according to Stenzel et al. [11]. Using the Chi square test, the relationships between the incidence of diseases in the monitored pigeon lofts before and after the end of the race season were statistically evaluated. The differences were considered significant at P<0.05.

The racing season is a challenging period for homing pigeons both in terms of their health and fitness and orientation. Pigeons come into contact with other competitors during their transport and with various etiological agents during flight, which can weaken their immunity or cause death in an uncontrollable situation [7].

At the beginning of the race season, different prophylactic programs were applied in the monitored lofts. Their evaluation showed an increased occurrence of trichomoniasis in loft B in which the breeder uses products on a natural basis in the form of plant extracts and essential oils. After the end of the last race, the incidence of coccidiosis, trichomoniasis, endoparasitosis and ornithosis complex was increased in both lofts. The comparison of the incidence of diseases between lofts at the end of the season showed a reduced incidence of trichomoniasis, coccidiosis and ornithosis complex in loft A where antibiotics were regularly administered during the race. On the contrary, an increased incidence of endoparasitosis and two clinical cases of salmonellosis were recorded in this loft and ended in the death of the positive pigeons (Table 1).

Note: n=number of isolated strains of total 60 investigated pigeons before race and from 45 pigeons after race from each holding, Ectoparasitosis1=caused by Columbicola columbae, Ceratophylus columbae, Endoparasitosis2=caused by Ascaridia spp., Capillaria spp. NS=non significant.

Table 1: The most common diseases of pigeons in monitored holdings.

According to Bergman, the most common diseases of pigeons include coccidiosis, trichomoniasis and respiratory infections, which are confirmed by our results from the monitored lofts [4]. In particular, coccidiosis associated with impaired immunity affects the digestion and composition of the bacterial microflora.

This protozoa parasite produces in the intestines ‘oocysts’, which are passed out in the faeces. The oocyst matures in the environment and will then affect other birds if ingested. Most adult birds carry low levels of these parasites. Only when large numbers of parasites are present is treatment necessary. Usually raised levels of coccidial oocysts are associated with suboptimal performance but in young birds and adults under stress an acute clinical form of the disease may be seen. The parasite affects the lining of the intestine causing diarrhoea and blood may be present. Affected birds are depressed, rapidly become emaciated and may die [12]. The positive cases recorded in our study at the end of the racing season showed a thin consistency of faeces, mild dehydration and dirty feathers around the cloaca. The accompanying phenomenon in these individuals was a higher weight loss compared to healthy pigeons.

On farms with an increased incidence of coccidiosis often other endoparasites in the form of a mixed infection are detected. In Istanbul, mixed coccidial and nematode infections have been found in urban pigeons nesting in well-known mosques: Capillaria obsignata-19.3% and Ascaridia columbae-14.6% [13]. In our study, an increased incidence of endoparasitosis was detected at the end of the racing season, especially in loft B, where Ascaridia spp. and Capillaria spp. were detected in coccidiosis-positive pigeons in the same faecal samples.

Intestinal parasites can affect birds of all ages but due to some degree of resistance in older birds the more extreme clinical signs are more commonly seen in the younger birds. Weight gain in young birds may be adversely affected and in more severe infestations diarrhoea, depression and loss of condition, even emaciation, may be obvious, as may anaemia. In mild infestations clinical signs may not be obvious which was also confirmed in our study where positive individuals were compared to other pigeons in their performances.

Another common disease recorded at the end of the season from oropharyngeal swabs was trichomoniasis. Trichomoniasis or canker is caused by a parasitic organism called Trichomonas colombi and three forms are recognised that affect the pharynx (throat), navel and internal organs respectively. The majority of adult pigeons are symptomless carriers of the organism but clinical cases may occur if the bird is under stress and in young pigeons the disease may be severe and even fatal. The disease is spread from adults to squabs in the crop milk and between pigeons by the oral route [14]. In our study, we observed an increased incidence of pharyngeal form in both holdings at the end of the season. It was visible cheesy yellow deposits on the membranes of the pharynx at the back of the mouth during the clinical examination. These deposits affect food intake and also breathing.

One of the difficult to detect and treat diseases is ornithosis complex, which was confirmed in both farms at the end of the season. Ornithosis complex is one of the combined diseases that can be caused by the microorganisms Chlamydia psittaci, Pasteurella spp. or mycoplasma.

Clinical signs vary from poor performance to an acute disease causing a marked conjunctivitis, decreased appetite, respiratory disease, diarrhoea and death. The acute form is particularly prevalent in young birds and older birds under stress. In some cases, the conjunctivitis can lead to secondary bacterial infection of the eye resulting in blindness. Recovered birds can transmit the disease and subsequently spread it to other pigeons [6]. The positive cases of individuals recorded by us showed a mild form of conjunctivitis with shortness of breath, especially after returning from the race.

The monitoring of diseases at the beginning and end of the race season in two lofts pigeons and using different prophylactic plans provided an overview of the health status of housed birds. The prevalence of monitored diseases in both lofts was the highest at the end of the racing season. Comparison of lofts showed a reduced incidence of coccidiosis, trichomoniasis and ornithosis complex in loft A, in which the breeder administered antibiotics in regular cycles to maintain pigeon′s health. Although the incidence of monitored diseases in loft A was reduced it should be borne in mind that breeders who constantly apply various drugs, especially antibiotics and corticoids, to their pigeons to maintain their „optimal shape”, reduce the competitors ’lifespan’ and disrupt their immune system. It is the long-term application of antibiotics and corticoids that causes the phenomenon of immunodeficiency, in which homeostasis and pH are disrupted, the intestinal microflora is declassified, thus opening the way for pathogenic agents such as salmonellosis, which was confirmed also in our study.

Author declares that there is no conflict of interest.

This study was supported by the Slovak project KEGA 009UVLF- 4/2021: Innovation and implementation of new knowledge of scientific research and breeding practice to improve the teaching of foreign students in the subject of Animal husbandry.

Copyright: © 2021 Zigo F, et al. This is an open-access article distributed under the terms of the Creative Commons Attribution License, which permits unrestricted use, distribution, and reproduction in any medium, provided the original author and source are credited.